Alien Nation arrived during a period when science fiction-themed action movies were all the rage. All sorts of variations on familiar themes were tried. Some, like James Cameron’s Aliens, were successful. Others, like Alien Nation, left something to be desired. More interesting because of its frustratingly de-emphasized backstory than because of the tired buddy-cop narrative, Alien Nation had a troubled production history but was successful enough to spawn a one-season TV series and a bunch of made-for-TV movies that continued being filmed into the late 1990s. There’s little enough in the theatrical feature to augur the birth of such a cult franchise.

The year is 1991 and Earth has become a little more crowded with the addition of 100,000 souls. An alien race called The Newcomers, a former slave species in need of a new home, arrived in a large mothership and were invited down to assimilate. Now, years after first contact, things have mostly normalized. The Newcomers, although subject to many of the same prejudices as any minority immigrant population (including an unflattering nickname, “slags”), have become productive members of society, owning houses, holding down a variety of jobs, and paying taxes. 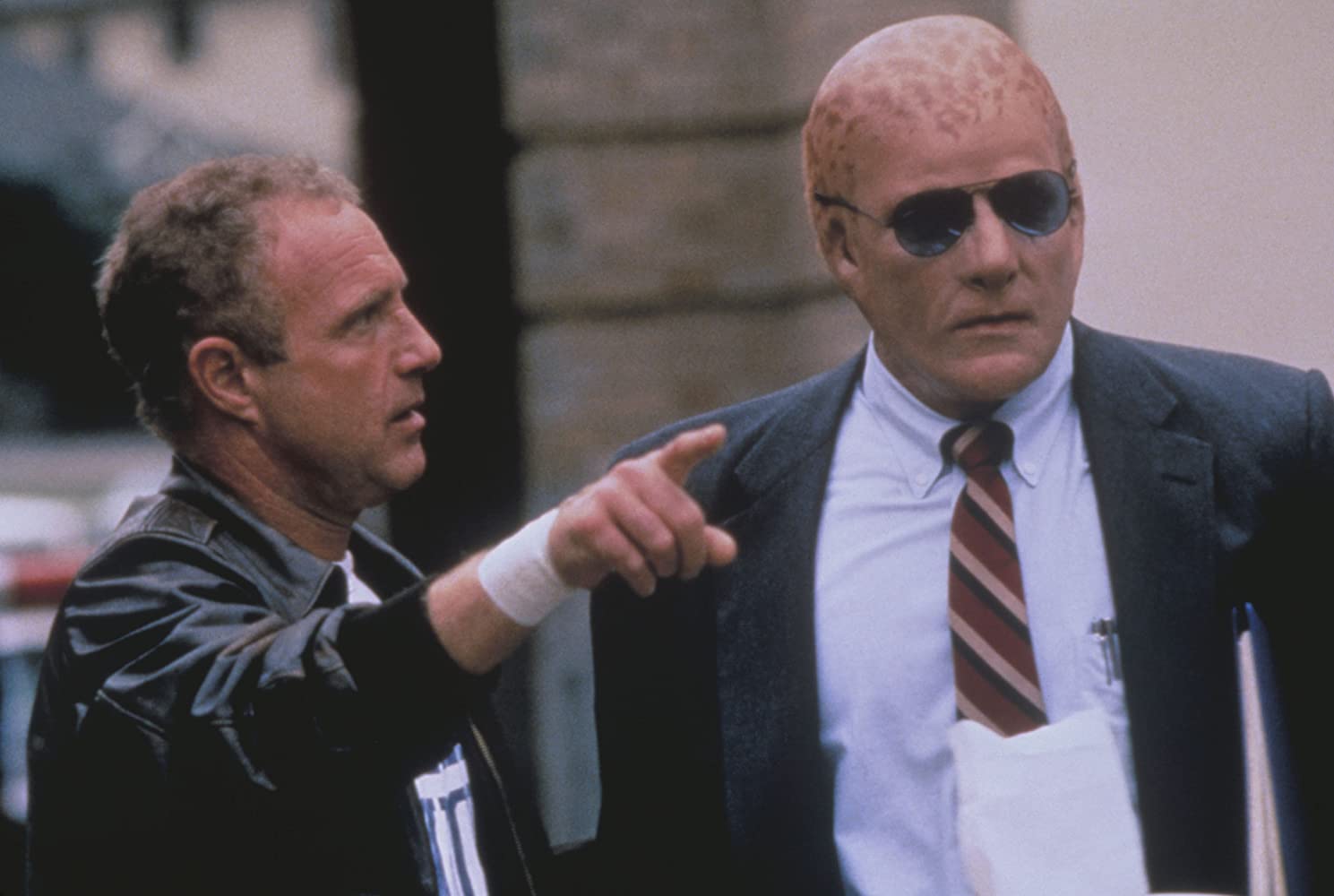 Matthew Sykes (James Caan) is a cop. He’s a burnt-out drunk whose wife has left him and whose bigotry toward The Newcomers is obvious to even a casual observer. When his partner is killed by a drugged-out Newcomer in a robbery, Sykes wants to investigate the murder. Instead, his captain gives him a new partner, Sam Francisco (Mandy Patinkin) – the first Newcomer police detective – and assigns him to another (related) case. The relationship between Sykes and Francisco is strained. Although the latter is respectful, Sykes makes it clear that the only reason he’s working with Francisco is because he believes that having a Newcomer as a partner might provide him with inroads into the alien community that will help with the investigation. It becomes apparent that the case is about more than a few random homicides. Someone is producing a highly addictive drug that Newcomers crave and they are willing to do anything to assure its distribution. Involved is William Harcourt (Terrence Stamp), a respected Newcomer with a close relationship to the mayor. When Sykes and Francisco’s investigation gets too close, Harcourt orders his assistant, Kipling (Kevyn Major Howard), to take them out.

For a distressingly large portion of the movie, if one was to ignore Mandy Patinkin’s makeup, it would be easy to assume that Alien Nation was a generic neo-noir buddy cop movie. It has all the necessary beats and plot elements, including a superfluous car chase that seems to have been included because such a thing is expected in all cop films. Like far too many of these movies, the story lacks suspense and intrigue, relying instead on a worn-out narrative trajectory that generates an unfortunate sense of déjà vu. Blade Runner, made six years prior to Alien Nation, illustrates how science fiction can elevate a cop movie rather than being slave to its conventions. Alien Nation’s failure in world-building is one of the reasons why the movie trails a vague scent of dissatisfaction. The backstory is perfunctory and the story offers only brief glimpses into the Newcomer’s culture. They get drunk on sour milk and can be stunned by a blow to the side under the armpit. They react to seawater like battery acid. Beyond that, we know so little about their society (both prior to their arrival on Earth and once here) that it’s difficult to relate to them as more than a terrestrial minority with heads that look like potatoes. A rule in film criticism argues that a reviewer should evaluate the movie that was made rather than one that wasn’t but there’s so much missing from Alien Nation that it’s difficult to consider the premise without pondering about how poorly it was developed.

Neither James Caan nor Mandy Patinkin embarrasses himself but neither does either give a memorable performance. Caan is in “tough guy” mode and Patinkin’s acting is impeded by the layers of makeup that obscure his features. The chemistry between them – a critical element in any buddy movie – is of the middling variety. The allegorical nature of the story hints at a science fiction-style In the Heat of the Night but the writing isn’t on the same level.

Alien Nation suffered from a variety of behind-the-scenes issues. Over the years, Caan has openly discussed his dissatisfaction with the production (although saying that he enjoyed working with Patinkin) and his dislike of director Graham Baker. The movie was greatly reworked in the editing room, with sequences re-arranged, character identities changed, and exposition removed to “improve pacing.” Jerry Goldsmith’s original score was jettisoned for being “too weird.” (Curt Sobel was subsequently brought on board.) The trailer contains quite a bit of material that never made it into the final cut. 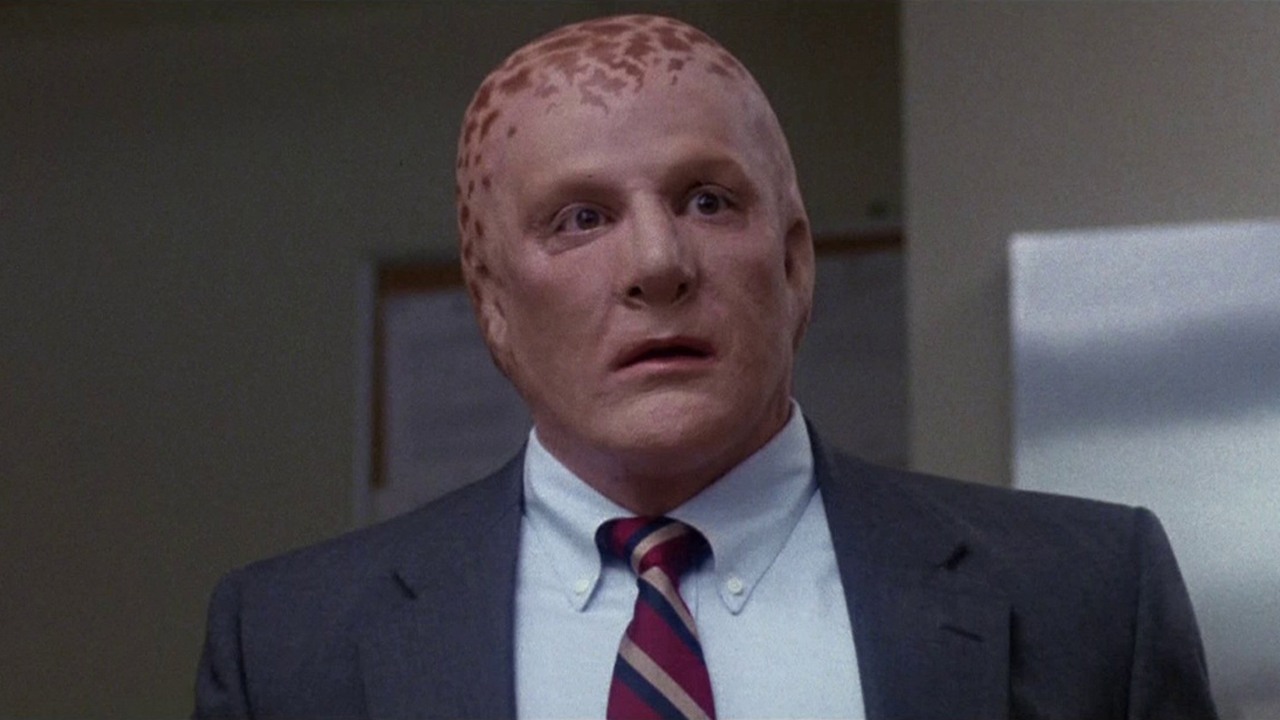 Although Alien Nation’s reputation has improved during the roughly thirty years since its release, its contemporaneous critical reception was negative-to-mixed. Many reviews echoed Roger Ebert’s two-star citation: “The movie is simply a failure of imagination. Nobody looked at the screenplay and observed that it didn't try hard enough, that it had no surprises, that it didn't attempt to delight its audiences with twists and turns on the phoned-in plotline. Alien Nation feels like a movie made by people who have seen a lot of movies, but don’t think the audience has.” Although Ebert’s tone may be unduly harsh – the production is fast-paced and passes painlessly – it is an accurate representation of the things about Alien Nation that cause it to underwhelm.

One could argue that Alien Nation works best when considered within the larger framework of the franchise that developed around it. Over the course of a full year’s television episodes and five additional made-for-TV movies, the world-building absent from the movie was given an opportunity to develop. The characters of Sykes and Francisco (played by different actors) blossomed and their friendship became multi-faceted. Seen as a stand-alone film, however, Alien Nation is more often frustrating than successful: a warmed-over cop movie that misses too many opportunities to be offbeat or at least different.