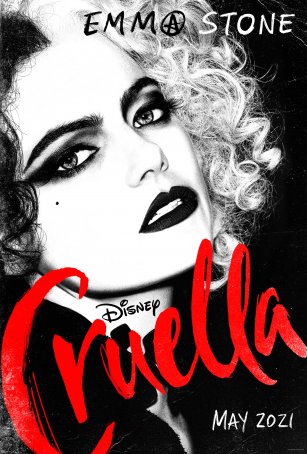 Taking a page out of the Maleficent handbook, Disney has decided to take another of its iconic villains – in this case, Cruella DeVil – and provide her with an origin story that recasts her as a misunderstood victim rather than one of the most loathsome individuals to walk the planet. However, where Maleficent was blessed with a strong screenplay, the same cannot be said of Cruella, which relies on cliches and coincidences – not to mention the contributions of no fewer than five credited writers (including Aline Brosh McKenna and Kelly Marcel), which (not surprisingly) results in a degree of unevenness in the finished project. Lead Emmas (Stone and Thompson playing Cruella and The Baroness, respectively) do good things with undercooked dialogue and nearly raw character development but there’s only so much they can accomplish.

I wonder how much of an appetite there is for Cruella. Granted, she has been brought to the screen both in animated and live-action form (Glenn Close, who played her in the remake and a sequel, is listed as an Executive Producer here), but is she really that high in the Disney Pantheon of Villains? Wouldn’t it have been more interesting to present the events of Cinderella from the Stepmother’s perspective? Or The Lion King as seen through Scar’s eyes? Is there enough interest in Cruella to overcome an instinctive tendency to shrug? 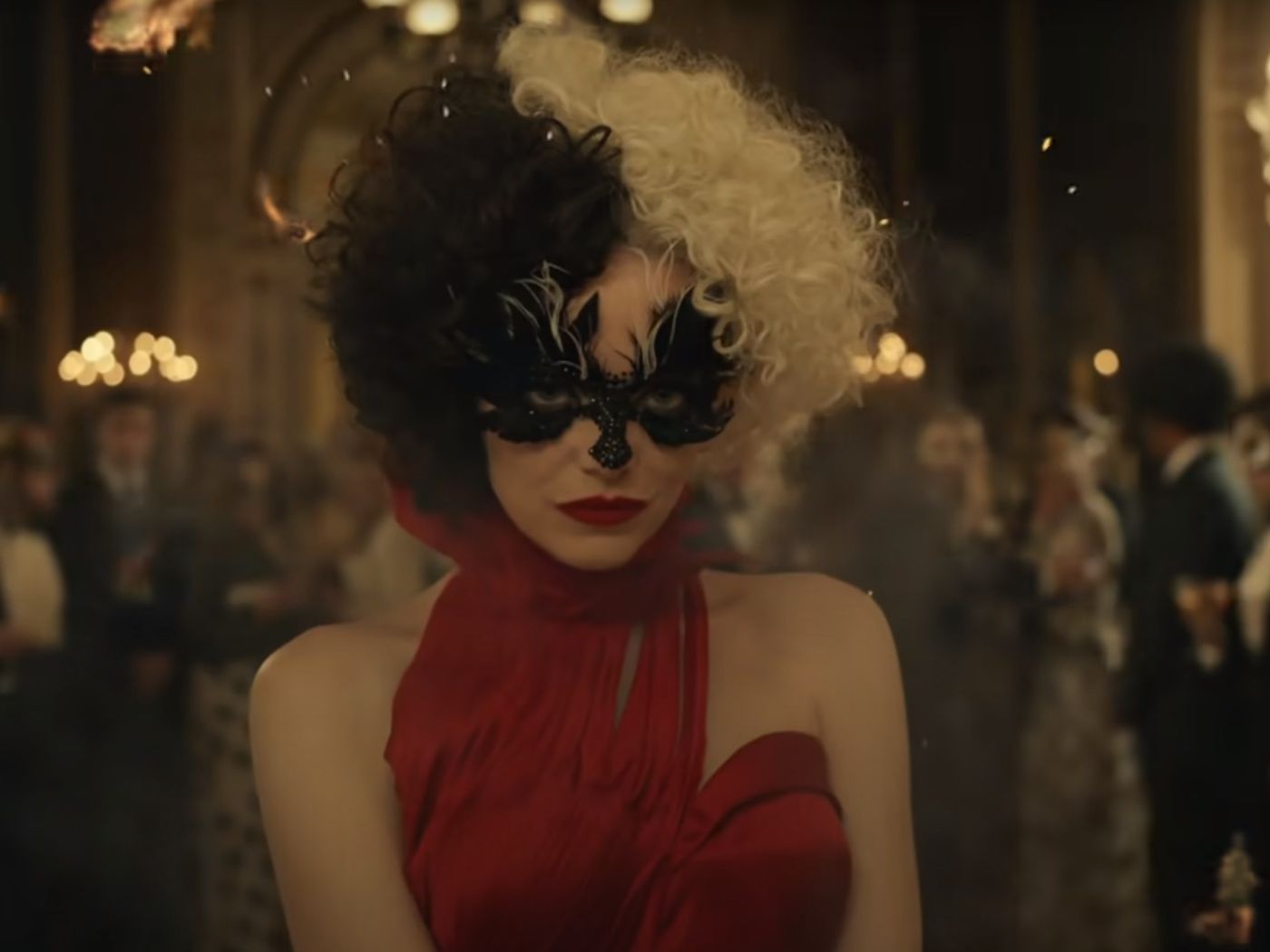 There’s a paint-by-numbers progression to the narrative. The movie starts out by pulling a trope off the Disney shelf: the death of the protagonist’s mother. Cruella, who goes by her given name of Estella, grows up as an orphan and befriends a pair of thieves, Jasper (Joel Fry) and Horace (Paul Walter Hauser). She has two goals in life: become a famous fashion designer and exact revenge on The Baroness, the woman she blames for her mother’s death. Thrown into the mix are a trio of dalmatians and a couple of other characters from One-Hundred and One Dalmatians. Stone’s Cruella doesn’t look much like Close’s (although the both have the distinctive bi-color hair) but she’s intended to be a little younger.

Cruella’s credited composer is Nicholas Britell but I’m hard-pressed to remember any music he might have written for the movie. That’s not to disparage his work but, insofar as I can recall, Cruella is wall-to-wall pop music from the late ‘60s and early ‘70s (the period during which it transpires). While I generally appreciate movies that use era-appropriate songs to set the mood, this is overkill. When one stops, another starts. It’s as if director Craig Gillespie is so distrustful of the story that he wants to distract viewers with a barrage of familiar songs. (Although, while the songs may be familiar to parents and grandparents, it’s questionable whether anyone under the age of 25 will recognize any of them.) 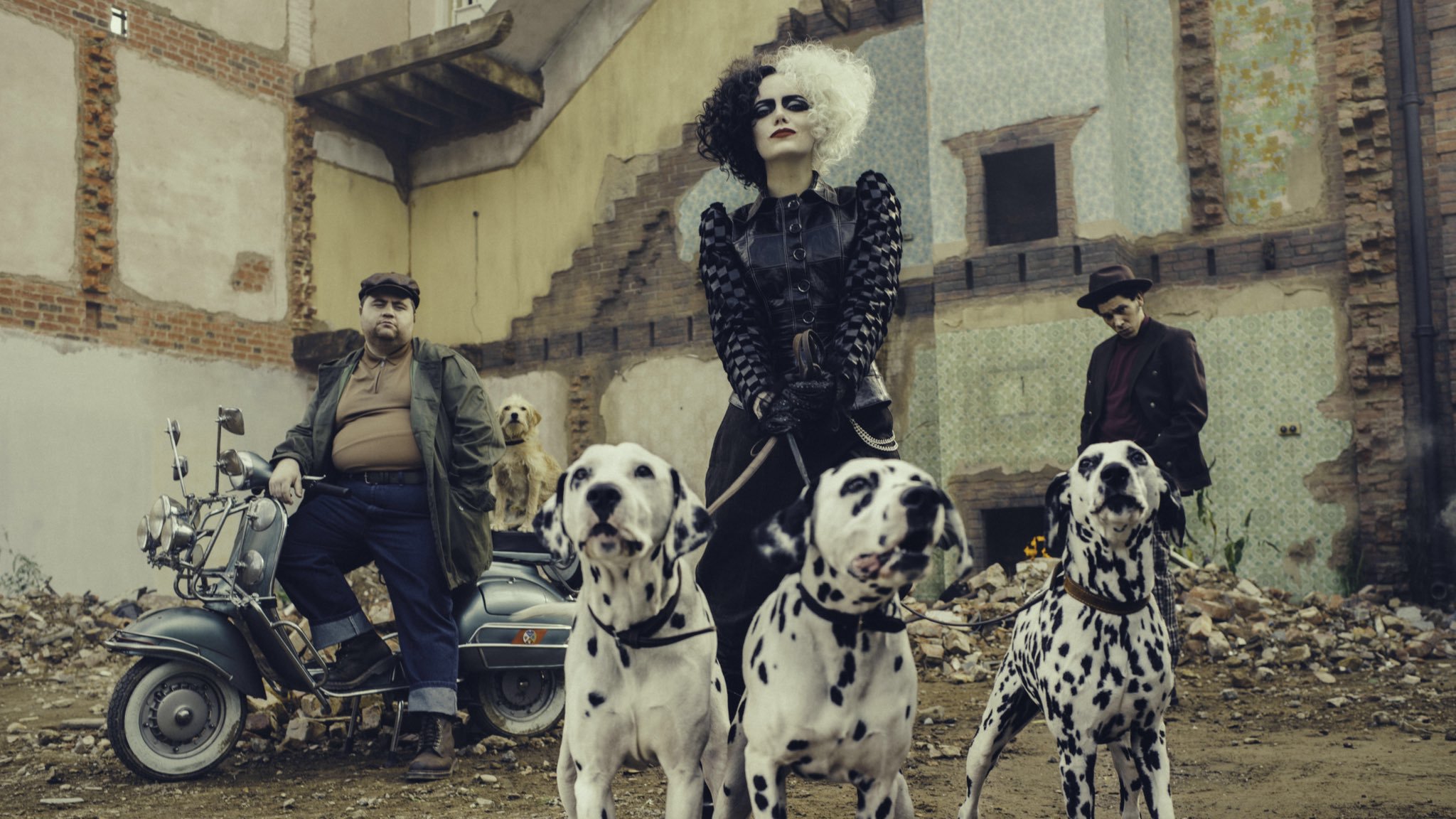 From a production standpoint, the movie is nicely mounted. Dickensian elements are meshed with early-‘70s kitsch in an oddly effective manner. The film consistently looks good even when the narrative doesn’t keep pace with the visuals. Stone and Thompson enjoy dueling with each other, with each trying to chew on more scenery than the other. The ultimate winner of this contest is Thompson, whose deliciously treacherous Baroness is unhinged. Cruella is too sympathetic to be completely over-the-top. Henchmen Joel Fry and Paul Walter Hauser are on hand primarily for comedic relief and Mark Strong gets a rare opportunity to play against type.

Devotees of either the classic animated Disney cartoon or the remake featuring real, live actors may find a few reasons to delight in Cruella. If one puts aside the film’s antecedents, however, what’s left is an unremarkable (although certainly not awful) family film (with a PG-13 rating) that lacks a compelling reason to exist. While value is in the eye of the payer, I’d find it hard to recommend paying the Disney+ surcharge ($30) or the price of a ticket for this one. It will eventually show up on the regular streaming service and is worth a watch then.