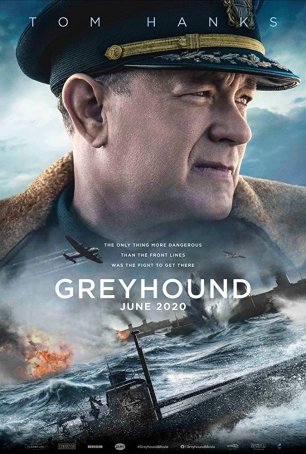 Greyhound is an atypical film: a World War II thriller that doesn’t aspire to be an epic. Most productions set during the early 1940s – even those made by blockbuster-minded directors – carry running times that are as bloated as their grandiose ambitions. Greyhound, however, is a more precise, intimate experience – an account of the moves and countermoves executed by the captain of the USS Keeling (codenamed Greyhound) during a North Atlantic crossing in early 1942. By limiting character development to a bare minimum – aside from his religious beliefs and his desire to marry his sweetheart, Commander Ernest Krause (Tom Hanks) is a mostly generic personality. His combat actions, however, which are presented in detail, are anything but generic.

Employing an actor with Hanks’ inherent likability offers a useful shortcut in establishing audience identification. Hanks’ reputation fills in many of the blanks left in the screenplay, “tricking” audiences into thinking we know more about Krause than the movie presents. This allows for less background, enabling the movie to get into the story more quickly. Aside from Krause and perhaps XO Charlie Cole (Stephen Graham), the movie is littered with anonymous, interchangeable faces.

Greyhound is a submarine film presented from the perspective of those aboard a destroyer. Most of the expected stylistic devices – the claustrophobic atmosphere, the ratcheting up of tension, the surges of danger – are present but, instead of the characters being confined under the water in a long cigar tube, they are trapped on a boat floating atop the waves, seeking to peer beneath the surface and identify the danger lurking fathoms below. Despite this flipping of the typical scenario, the film works surprisingly well. Or at least that’s the case until the strangely anticlimactic final 15 minutes.

Although not strictly based on specific historical events, Greyhound takes its inspiration from real-life incidents from the Battle of the Atlantic as detailed in C.S. Forester’s 1955 novel, The Good Shepherd. In distilling the essence of the 270-page book into something suitable for a movie, screenwriter Tom Hanks elected to focus on the combat elements. As such, although director Aaron Schneider generates and maintains suspense, he does so from a distance. The various ships are as much characters as the men controlling them. The “villain,” a German U-boat called Grey Wolf, is represented by a disembodied voice.

For Krause, a career Navy officer on his first wartime assignment, the mission is to guide a convoy of 37 Allied ships across the Atlantic to Liverpool. In addition to Krauss’ USS Keeling, the escort group is comprised of the British destroyers HMS James (“Harry”) and HMS Victor (“Eagle”), and the Canadian HMCS Dodge (“Dickie”). Once the ships enter the “Black Pit,” the part of the ocean where there is no protective air cover, they become prey for German U-boats. After emerging victorious following the first enemy encounter, Krause discovers that they have attracted the attention of a “pack” and, as with any hunt, a cat-and-mouse game ensues with the attackers picking off random members of the convoy seemingly at will while taunting the four warships using ship-to-ship radio.

Those who want an impeccably detailed war movie or something rich in character development won’t find it here. (Note: for anyone desirous to learn more about the fictitious Krause, the novel fills the need – it’s written entirely from his perspective.) This is a lean, stripped-down example of a more old-fashioned kind of war movie. Putting aside the prolonged ending (the final battle ends with about a quarter hour left on the clock), Hanks’ script is an example of economical storytelling and the end result is a thrilling 75 minutes of the kinds of things one expects from well-made submarine movies.