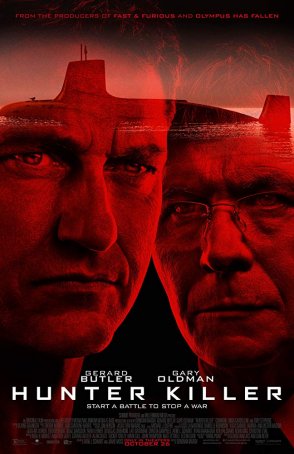 Hunter Killer is not going to challenge Das Boot for the title of “best submarine warfare film of all time.” By tossing aside the reliable characteristics of the genre (claustrophobic atmosphere, sense of isolation, simmering tension), director Donovan Marsh’s movie strives to be more of a standard-order action war production. In terms of pacing and narrative thrust, it recalls the defunct Kiefer Sutherland TV show, 24. At its best, 24 was often preposterous, occasionally idiotic, and always compulsively watchable. The same is true of Hunter Killer, which won’t win any awards for acting or writing but generates suspense when it needs to and tells an engrossing Tall Tale.

Gerard Butler, who has been making a living in “B” movies with “A” budgets, plays submarine captain Joe Glass. He and his (new) crew are sent on a rescue mission: an American sub has disappeared near Russian waters and is feared sunk. No sooner has Glass discovered the downed boat than he is fired upon. After evading the enemy’s torpedoes, he executes some clever maneuvers that allow him to locate and eliminate the sneaky Russian hidden just under the ice. This is all part of a larger power play by the Russian defense minister, Admiral Durov (Michael Gor), to wrest power from President Zakarin (Alexander Diachenko). With the coup underway, Zakarin becomes Durov’s prisoner, while the latter begins orchestrating plans for World War III. The hawkish U.S. Chairman of the Joint Chiefs of Staff, Charles Donnegan (Gary Oldman), appears all-too-ready to fall into Durov’s trap. Before agreeing to combat, however, the U.S. President authorizes a daring rescue mission sending Glass’ sub to support a ground team charged with extracting Zakarin. 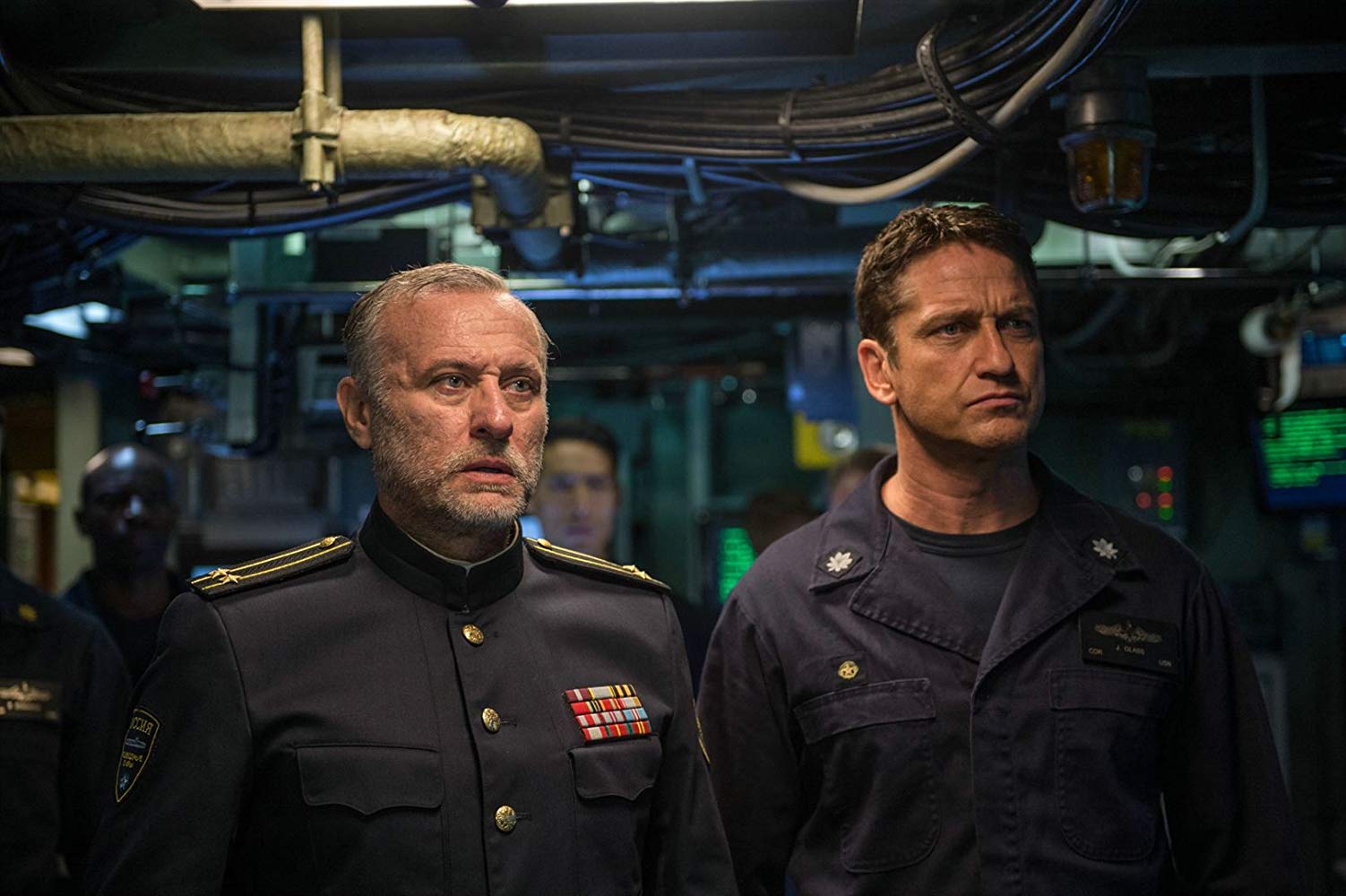 Whatever praise Hunter Killer receives, little is likely to be reserved for the acting. The role of Captain Glass is well-suited to Gerard Butler, who has become typecast as this sort of character. Glass is more subdued than some of Butler’s recent assignments – he never yells at the top of his lungs and there’s minimal physicality. He gets to play the strong, silent type. The most emotive he gets is when having a spirited argument with his XO. Gary Oldman, who filmed this around the same time as his Oscar-winning part in Darkest Hour, reminds us that even the best actors need to pay the bills and they rarely give their all for “paycheck” performances. Everyone else is either lifeless or inept, although Michael Nyqvist (as Russian submarine captain Andropov) had an excuse: he was dying at the time. The actor passed away in mid-2017, more than a year before Hunter Killer reached theaters – an indication of how long it was sitting around.

Hunter Killer doesn’t exist to provide insight into modern submarine warfare or how today’s high-tech underwater boats play into geopolitics. This is pure escapism, intended to give audiences a nicely-mixed adrenaline-and-testosterone cocktail with a strong, macho leading man and enough action (both on land and in the water) to justify the two-hour running length. (In transparent attempts to placate female viewers, Linda Cardellini is on hand as a high-ranking NSA liaison and the U.S. President is a woman.) The movie works on its own cartoonish terms. The extraction/rescue is suspenseful and the underwater combat, while not well-choreographed, is exciting. There’s also a big crowd-pleasing moment that drew cheers from the audience when I saw the film. Hunter Killer is that kind of movie – it’s easy to point out all the things it does wrong and poke fun at its mistakes but, in the end, it’s an absorbing way to pass two hours. Not everything released at this time of the year has to enrich the cinematic IQ.