It’s one of the oldest stories in the book – a mismatched pair, thrown together out of necessity, fight their way through a series of complications to find redemption and discover that their experiences have created a powerful bond between them. This premise has formed the basis of everything from Hitchcockian thrillers to romantic comedies. Titles like The Odd Couple have scored major successes with it. Here, director Michael Showalter has used it as the foundation for an absurdist caper comedy that is far more successful when focusing on the unlikely romance between its stars than the rather silly and underwhelming murder mystery that represents the ties that bind (sometimes literally).

Like all movies of this sort, The Lovebirds has three distinct elements: the relationship (and the associated chemistry between the leads), the crime, and the humor. The first is sold, the second is forgettable, and the third is uneven. Give the movie a 50% batting average. It’s along the same lines as the Steve Carell/Tina Fey outing, Date Night, and considerably better than the Jennifer Aniston/Gerard Butler misfire, The Bounty Hunter.

The Lovebirds opens with a cute scene focused on the chemistry between Jibran (Kumail Nanjiani) and Leilani (Issa Rae), two lovers who are experiencing a degree of awkwardness following their first night together. It’s a sweet and believable scene and it allows us to believe that the two are headed for rom-com bliss…until we meet them four years later. The next time we catch up with the couple, they’re headed for Splitsville. Their arguments have become exercises in insults and acrimony. The latest one starts with a dissection of CBS’ The Amazing Race and improbably ends with a disagreement about whether an orgy can be spontaneous or whether it needs to be planned. 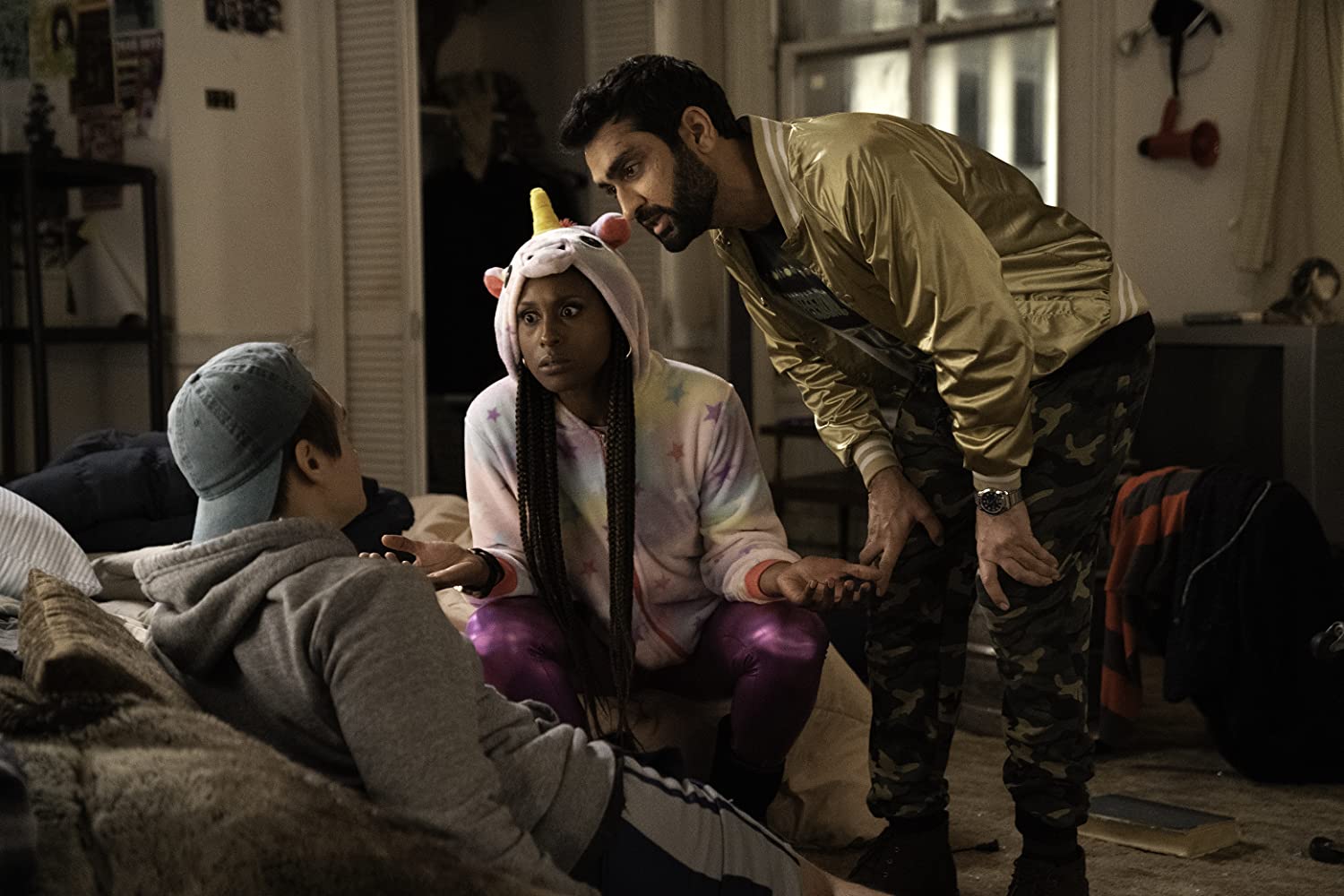 It’s around this time that the criminal/action elements interfere with what is shaping up to be an entertaining relationship movie. Distracted while driving, Jibran accidentally runs into a careless bike rider. The guy isn’t badly injured; he gets up and attempts to go on his way. That’s when a mustachioed “cop” (Paul Sparks) jumps into the car and, with Leilani in the front passenger seat and Jibran in the back, gives chase. At first, the couple think they’re the good guys and the man on the bike is a villain – until the cop catches his quarry and repeatedly runs over him before taking off on foot. Now, convinced they have been framed for murder, Jibran and Leilani go on the lam with the goal of following clues to prove their innocence. Their time on the run ends with a lampoon of Kubrick’s Eyes Wide Shut, and it’s here that the filmmakers most clearly overreach.

The Lovebirds has its share of funny moments, most of which can be found in the sometimes-sharp dialogue, credited to screenwriters Aaron Abrams & Brendan Gall (although it wouldn’t surprise me to learn that the actors had some input). The one-liners, some hilarious and some not, come frequently – one example is when Leilani criticizes Jibran’s profession: “You make documentaries. Those are just reality shows that no one watches.” The physical comedy isn’t fresh or amusing. Someone getting kicked by a horse might have worked back when The Three Stooges were in their prime but that was when people still watched things in black-and-white.

Director Showalter previously worked with Kumail Nanjiani on The Big Sick, which was a demonstrably better film. Regardless, Nanjiani is one of the two main reasons to watch The Lovebirds. The other is Issa Rae. Although it may be a cliché to make the observation, the chemistry between these two makes it a joy to see them together on screen and we’re willing to do more than suspend a little disbelief to spend the time with them. Ultimately, the caper/crime/action material is little more than a distraction, although Showalter wisely doesn’t focus too strongly on it. We’re not subjected to overlong chase and fight scenes.

Originally, The Lovebirds was targeted for a theatrical release but the rise of COVID-19 put it on hold. Rather than reschedule it, Paramount sold the rights to Netflix, thereby making the movie widely available. At a time when so little new product is available, The Lovebirds stands out as a worthy opportunity for home entertainment. Relying on the screen presence of the stars and their ability to make vitriolic bickering into an engaging spectator sport, The Lovebirds might have underwhelmed in a movie theater but works just fine in the very different circumstances in which it has been unveiled.