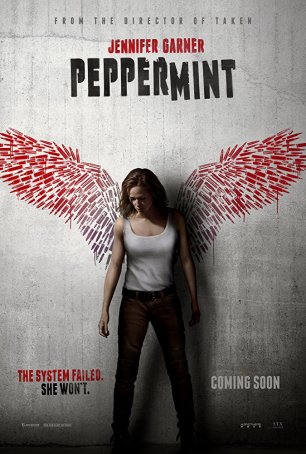 In 2018, vigilantism is all the rage. I wonder whether that says something about our current culture or whether it’s just something Hollywood has latched onto as a way of making a buck. Peppermint is the third such high-profile film to come this way in the past few months, following in the wake of the Bruce Willis Death Wish remake and Denzel Washington’s The Equalizer 2. Now, it’s time for a woman to get into the action, and who better than Jennifer Garner, who earned her reputation kicking ass on J.J. Abrams’ TV show Alias?

Peppermint comes from Pierre Morel, the former Luc Besson disciple whose claim to fame was transforming Liam Neeson into an action hero in Taken. To the extent that it worked, Taken made the protagonist sympathetic and the villains despicable, resulting in a visceral sense of satisfaction every time Neeson dispatached one of the host of bad guys. Morel attempts to employ a similar strategy in Peppermint, but Chad St. John’s screenplay fails because the setup is too distressing and depressing to wring enjoyment out of Garner’s righteous vengeance.

The movie opens with an extended flashback detailing the background. Riley North (Jennifer Garner) is a devoted mother and wife. Her ten-year old daughter, Carly (Cailey Fleming), is the light of her life and her husband, Chris (Jeff Hephner), is working hard to upgrade their lifestyle and home. When he stumbles into a bad situation connected to a local drug lord, Diego Garcia (Juan Pablo Raba), he becomes a target. A drive-by shooting at an amusement park leaves Chris and Carly dead and Riley injured. Once she has recovered sufficiently from her wounds, she is able to pick the shooters out of a lineup. The trial is rigged, however, with the prosecutor and judge on Garcia’s payroll, and everyone goes free. Riley then disappears off the grid for five years so she can teach herself to become a human killing machine. She re-emerges and begins working her way up Garcia’s food chain, murdering anyone associated with Carly and Chris’ death with the ultimate goal being the drug lord himself. 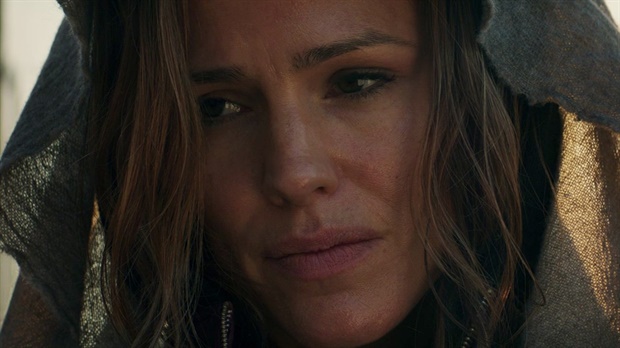 Everything about Peppermint is a downer. That’s one of the dangers of killing off a cute, likable little girl in the first 20 minutes. It depresses everything. There’s nothing cathartic about Riley’s burst of carnage. It’s all perfunctory, mechanical. Morel’s directorial style is unnecessarily “artistic” (for lack of a better term), featuring fast cuts and pointless flourishes. Garner is capable enough as a vigilante and she holds her own in the brutal fight scenes, but the movie never delivers the burst of exhilaration we have come to expect from films of this sort.

The dumb screenplay doesn’t give the actors much to do. Garner’s physicality is showcased but not her acting ability. She’s forced into a one-act mold and, while it allows her to escape the stereotype she has recently been forced into, it’s not a worthy role for someone of her talent and charisma. No one else in the film leaves much of an impression, especially not the two detectives or the one FBI agent. They’re there because when someone kills about two-dozen people, the viewer will expect some level of police involvement.

Peppermint contains its share of awkward scenes that stick out like the proverbial sore thumb. In one, Riley shows her humanity but tracking an unfit father into a convenience store and threatening to blow his head off if he doesn’t shape up and be the father to his son that the boy deserves. (Yes, this really happens.) In another, she breaks into the home of a bitchy character we meet early in the film so she can punch her in the face (as her daughter once suggested). This is as sloppy and lazy as screenwriting gets.

Two similar films come to mind. The first, Mel Gibson’s Payback, shows how the methodical decimation of a criminal organization can work given the proper tone and approach. Payback is thrilling and exhausting but it has a pulse and keeps the viewer on the seat’s edge. 2017’s In the Fade has a similar setup – the wife/mother of a murdered husband/child, denied justice by the legal system, takes matters into her own hands – but it follows a different road. Like Peppermint, that film is downbeat, but the tone is in keeping with the serious nature and subject matter, and there’s more than a little social commentary in the mix. Peppermint isn’t preaching a message; it’s intended as escapist fun. The problem is, there’s nothing “fun” about sitting through this 100-minute exercise in robotic butchery.