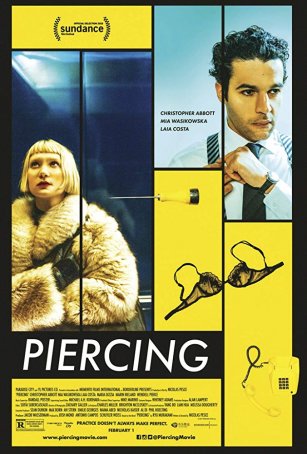 "There are eight million stories in the naked city. This [is] one of them." That iconic closing line from the TV series Naked City is one of the things I thought of at the beginning of Nicolas Pesce’s Piercing, which shows an art deco version of the New York City night skyline with hundreds of lit-up windows offering peeks into the lives of the various people living inside. The movie’s early moments also offer a nod to cheesy ‘70s cinema, complete with a “feature presentation” introductory card and various fake video/audio glitches. All of this stuff is fun and stylish but does little more than offer some color and set the stage for what is to come.

Piercing, which was adapted by Pesce from the Ryu Murakami novel, is an exercise in gore, obsession, and psychosis. It revels in the lurid. Everything from the set design to the lighting to the acting hints at a nostalgically warped remembrance of ‘70s sleaze. The story is pure exploitation but the style bespeaks a more artistic bent. The film can be enjoyed (to the degree it can be enjoyed) for its excesses, perverse humor, and excursions into blood, barbarism, and violence, but the narrative doesn’t make a lot of sense. For large portions of Piercing, I was wondering whether I was watching “real” events or some kind of fever dream.

Our first glimpse of Reed (Christopher Abbott) convinces us that he’s one sick puppy. He’s holding an icepick like a threat over the head of his infant child. Thankfully, the movie doesn’t start with an infanticide but, before the moment passes, we know all we need to know about the man’s character. He hears voices and they’re telling him to kill someone. So he says goodbye to his supportive wife, Mona (Laia Costa), and embarks on a “business trip.” The business: find a prostitute (one who speaks English), tie her up, and use the icepick (followed by a bone saw) on her. He rehearses the act in unsettling detail, with Pesce supplying a package of grisly sound effects. When Jackie (Mia Wasikowska) receives the summons from her pimp/agency to visit Reed’s hotel room, she doesn’t know what she’s in for. Neither, as it turns out, does he. We soon learn that Jackie is no less mentally stable than her client and their interaction turns into a power struggle – a weird psychosexual cat-and-mouse game in which consent becomes a moving target. 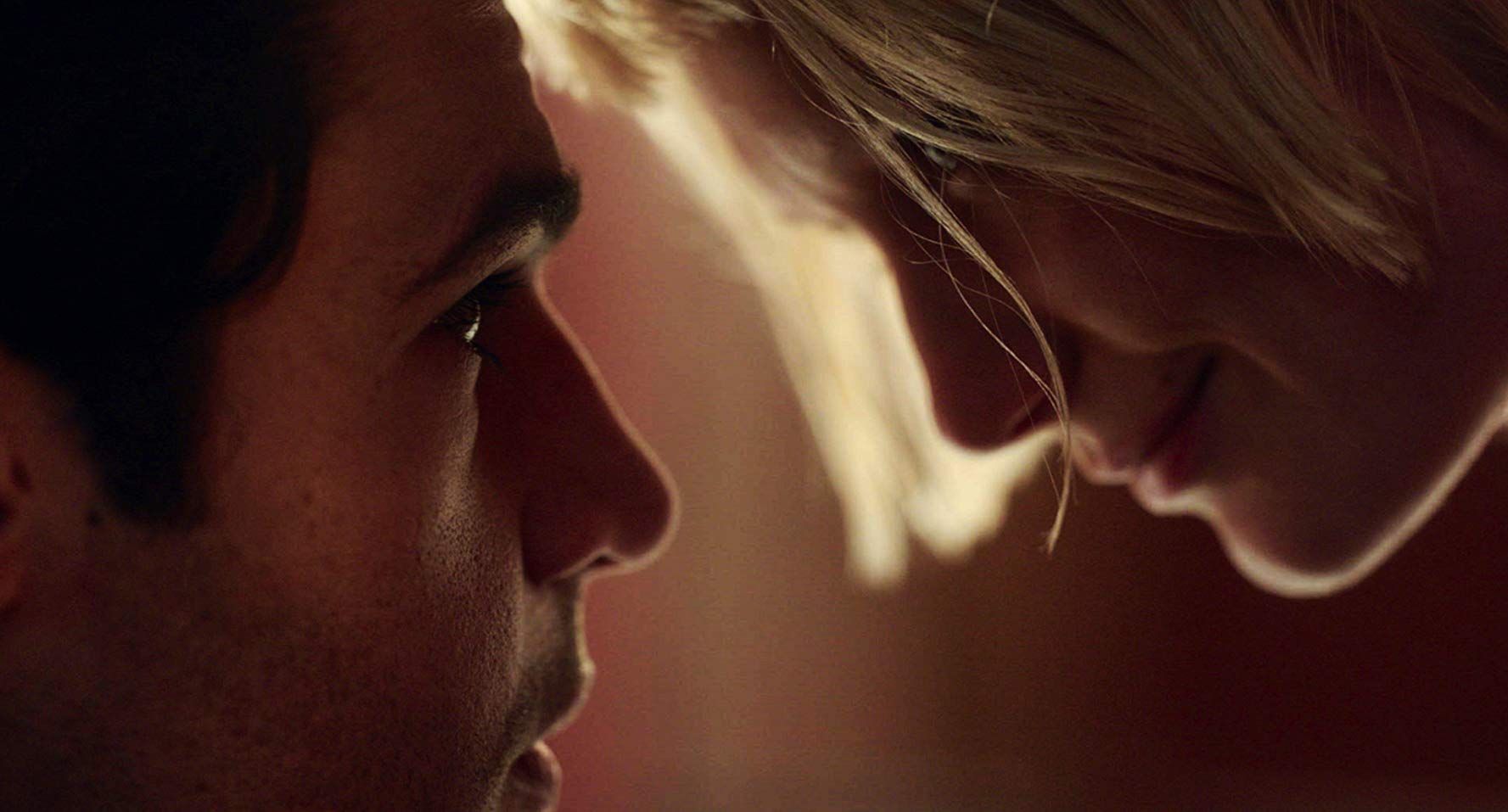 The movie offers its share of small pleasures. The most fascinating aspect is watching how the dynamic between Reed and Jackie shifts. Does she know what’s coming and welcomes it? Even when Reed’s over-planned blueprint is in tatters, the voice encourages him to proceed. And is that phone call real? In fact, is anything real? Piercing treads a fine line between being compelling and frustrating and too often slips to the wrong side. Once we realize that the characters don’t matter and the narrative is never going to make any sense, all we’re left with is the enjoyment of how the two actors play off one another. They’re both very good, especially Wasikowska, who crafts a more human portrait than what’s in the script. Did David Lynch influence Pesce? Quite possibly, but Lynch has had his share of failed experiments and this feels a lot like one of them.

Piercing is short enough that it doesn’t wear out its welcome (assuming, of course, you’re not squeamish – there are a few cringe-worthy scenes involving scissors, needles, and other sharp implements) and it’s good for some shocks, surprises, and moments of twisted humor. Pesce came to the project with a specific intent – this is the work of an artist not a hack – but the fact that he succeeds on his own terms doesn’t necessarily make Piercing a good movie. The director’s macabre flourishes and garish visuals can’t completely camouflage the hollow space at the production’s core.