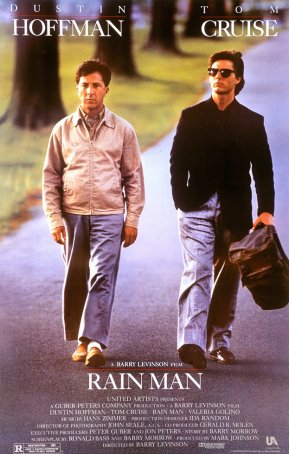 Rain Man is an oddball buddy/road movie that nearly drowns in a tsunami of sentimentality and predictability. An unabashed crowd-pleaser, the 1989 Best Picture Oscar winner has aged poorly, its marginal likability fading like an old Polaroid snapshot as the passage of years have shown how remarkably unremarkable everything is, including the much-ballyhooed performance of Dustin Hoffman. Considering some of the great movies released in 1988 (including fellow Oscar nominees Dangerous Liaisons and Mississippi Burning and popular fare like Die Hard and A Fish Called Wanda), it’s a travesty that Rain Man claimed the mantle of the year’s top film. Perhaps the astounding total domestic gross –  $172 million (inflation-adjusted to about $390 million in today’s currency) – had something to do with that.

The movie chronicles the emotional and physical journeys of two mismatched brothers as they traverse the country (traveling from Cincinnati to Los Angeles by car) and get to know one another. The “twist” is that the older man, Raymond (Dustin Hoffman), is an autistic savant who is incapable of being in a normal human relationship. His younger brother, Charlie (Tom Cruise), is a hustler whose reasons for “bonding” with Raymond are initially financial. He wants to become Raymond’s caretaker so he can have access to the latter’s $3M inheritance – money Charlie feels he’s entitled to at least half of. 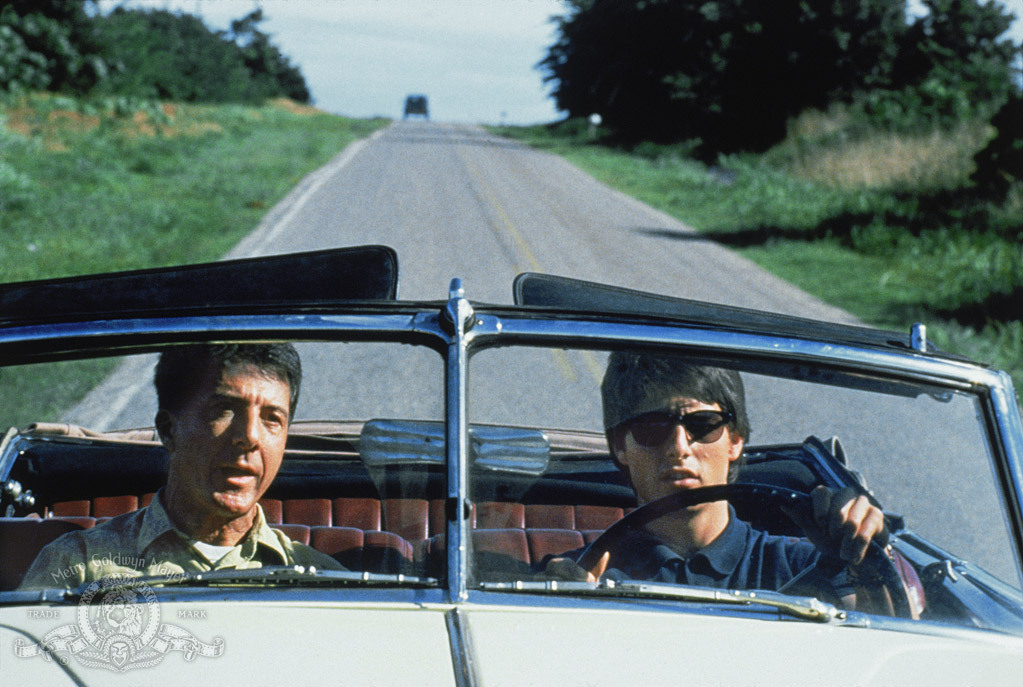 Charlie is a slick businessman but when it comes to interpersonal relationships, he’s not very good. His long-suffering girlfriend, Susanna (Valeria Golino), can attest to that – she resents his coldness and is visibly frustrated by the dead end toward which their romance appears to be headed. Then Charlie gets word that his father has died. Although he was estranged from the old man, Charlie dutifully attends the funeral and meets with the lawyer, expecting a big payday. Instead, he learns that he has an older brother, Raymond, who is institutionalized because he’s incapable of living in normal society. The newly-rich brother has no concept of what it means to have money so Charlie kidnaps him with the intention of using Raymond as a conduit to the inheritance. Susanna, having lost patience with Charlie, walks out on him, leaving the brothers to fend for themselves. Charlie intends to fly back to L.A. with Raymond in tow but problems arise when Raymond refuses to board a plane. A three-hour trip becomes a three-day tour with Charlie increasingly pushed to the brink by Raymond’s specific dietary and schedule-related requirements.

Although Rain Man was widely loved when it was released 30+ years ago, it’s a classic example of a motion picture that was honored for “in the moment” views rather than with an eye toward its long-term reputation. Its “progressive” views of those with autism are embarrassing by today’s standards and its overall superficiality makes one wonder what the voters were thinking when they cast their ballots in the early days of 1989. 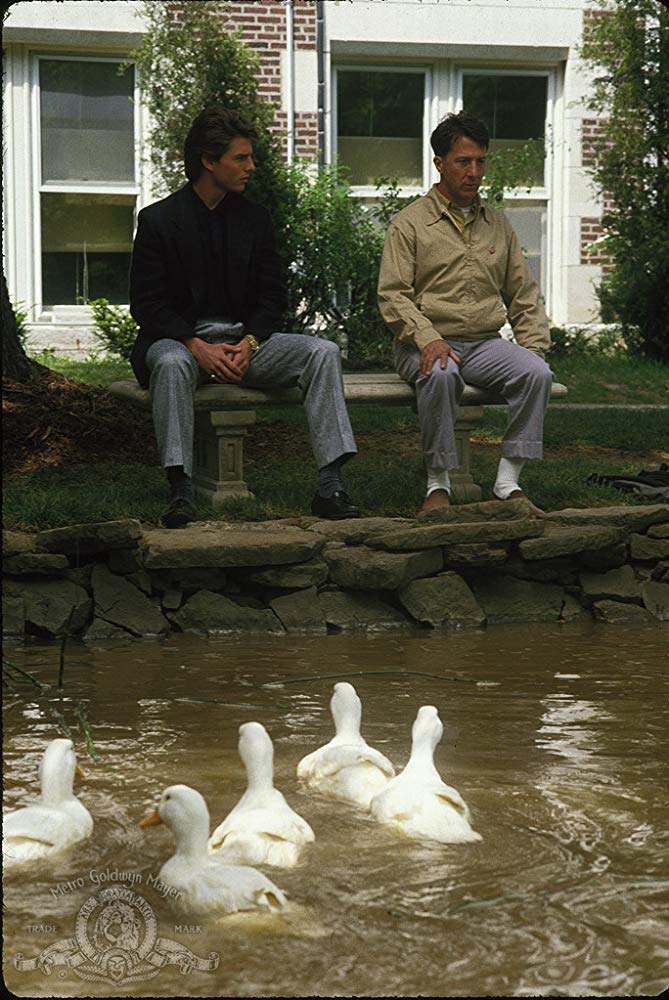 One open question that has never been resolved is whether Dustin Hoffman’s (Oscar-winning) performance is a good, honest interpretation of an autistic savant or whether it’s a cringeworthy caricature. That debate, lively during the 1989 Oscar season, was never settled and, watching the film all these years later, I can see the points on both sides. Hoffman studied the mannerisms of various autistic individuals and used those observations to inform his portrayal. But the screenplay softens the character with a kind of magical realism that undercuts the inherent honesty Hoffman was attempting to bring out. The result is to use manipulation to make Raymond sympathetic by downplaying his negative traits or turning them into lovable quirks. One could argue that Tom Cruise, with his less showy and more grounded performance, is the better actor, although the script fast-forwards his transformation in such a way that it’s not believable. Charlie goes from being an asshole to an advocate in a few scenes with too little motivation. It’s a classic example of telling instead of showing.

One weird scene is jarring when viewed today: the elevator kiss. Susanna, trying to initiate Raymond into the possibilities of affection between men and women, forces an unwanted kiss on the unsuspecting older brother. (His eventual verdict: it’s wet.) This scene, intended to be playful (and received that way) in 1988, is borderline-creepy in 2020. The film’s permissive attitude toward an inappropriate encounter says a lot about how society’s views have changed over the last three decades. 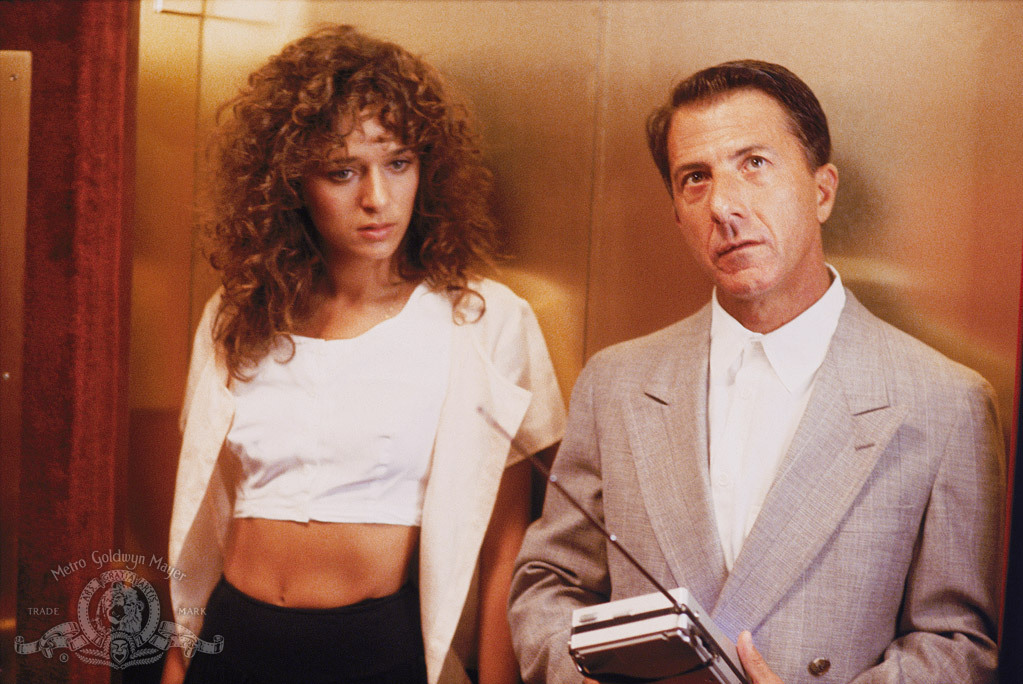 If one was to look at director Barry Levinson’s filmography, one might assume that Rain Man was his career high-point. After all, he won his only Best Director Oscar for it. Reflected through the prism of decades, it’s one of his lesser films – certainly trailing the likes of The Natural, Avalon, Good Morning, Vietnam, Wag the Dog, and And Justice for All (which he co-wrote but didn’t direct).