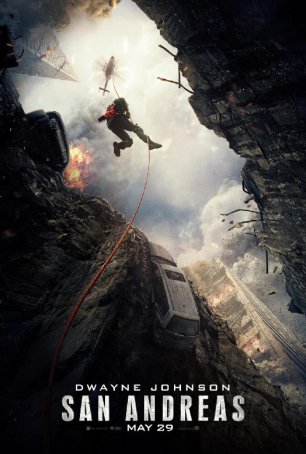 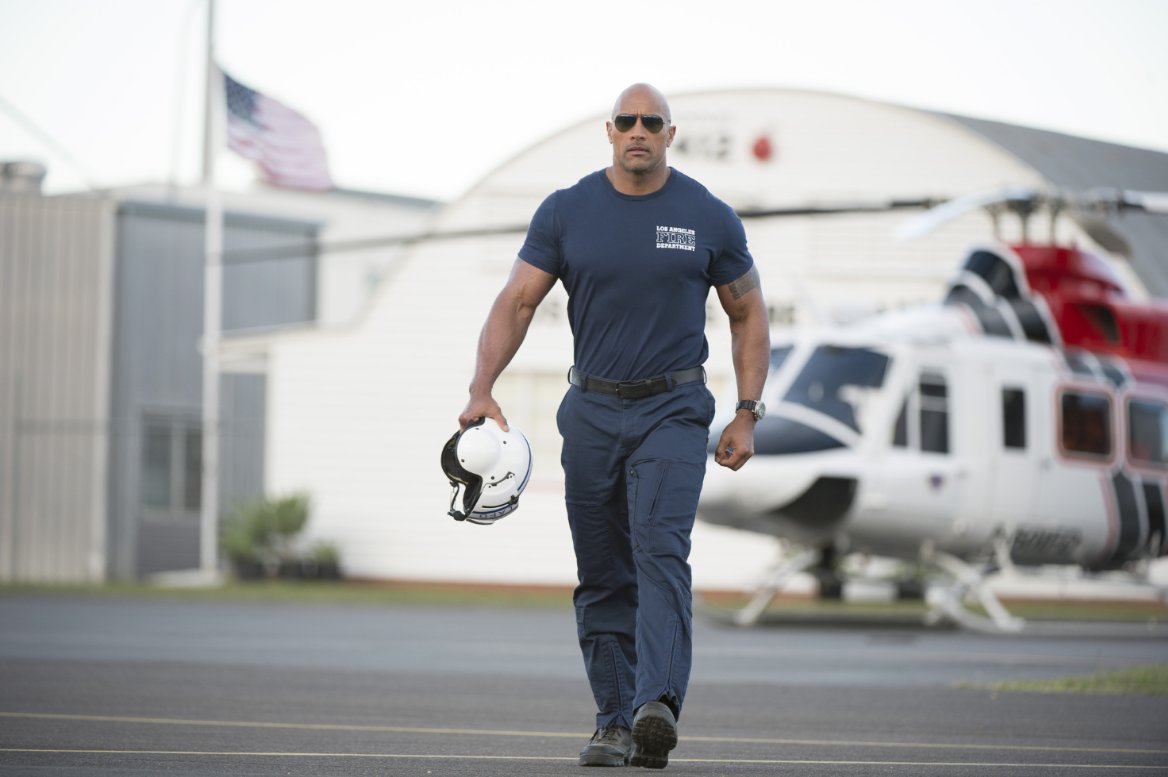 Although the movie fits effectively into the overall disaster genre, it might be worth considering whether real-world occurrences between 1974 and 2015 have altered our ability to enjoy the film as the escapist romp it intends to be. Can anyone watch the collapse of buildings in Los Angeles and San Francisco and not flash, at least briefly, to 9/11? Is it possible to view the tsunami hit San Francisco Bay (and destroys the Golden Gate Bridge) and not recall the 2004 Indian Ocean event? And, with the earthquake in Nepal still fresh, do the images of mass destruction take on a different shade? With the nightly news becoming a catalog of disaster images, is there room for a hackneyed production like this one? Does San Andreas offer a release from reality or does it remind us of dark events of the not-so-distant past? 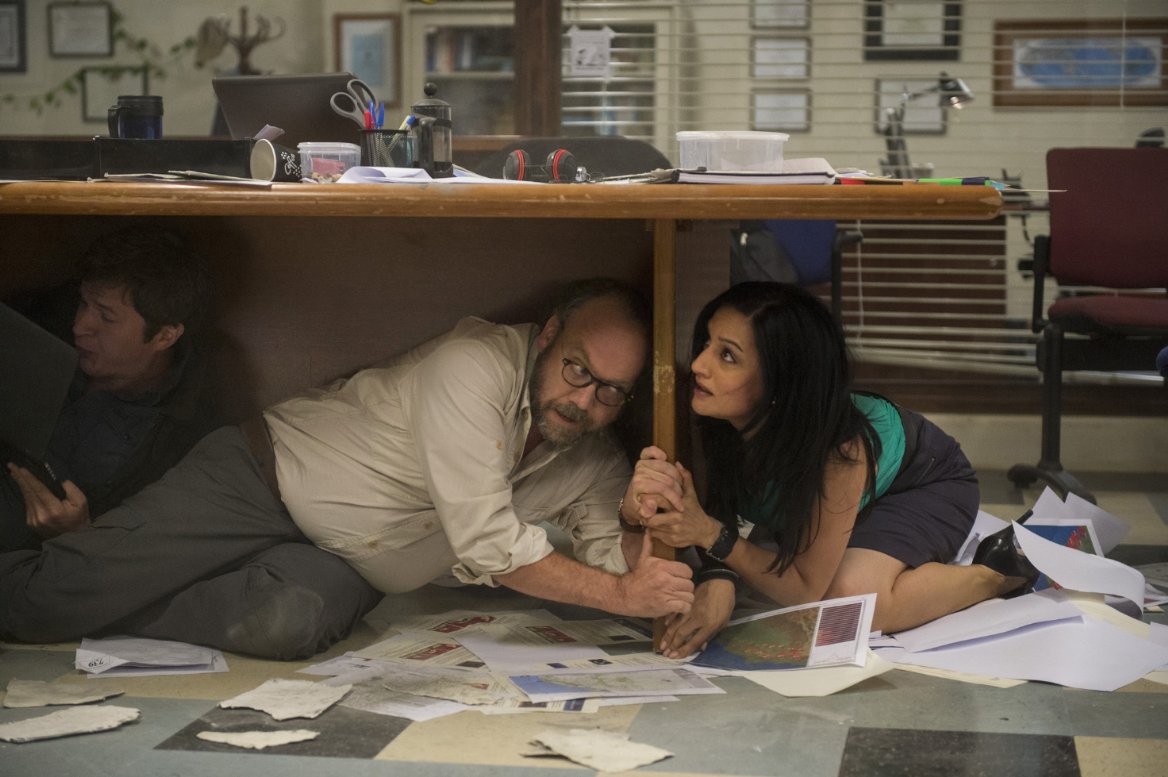 San Andreas follows two separate storylines that never converge. Paul Giamatti is scientist Lawrence Hayes, whose research into earthquake prediction has allowed him to forecast "the big one" just as it's about to happen. Following the death of a colleague at an event that destroys the Hoover Dam, Hayes has been able to validate his methods and the latest data tells him that a two-part disaster is about to unfold in California with both southern and northern epicenters.  After making his pronouncement, Hayes spends most of the rest of the movie huddled under a table next to an attractive TV reporter (Archie Panjabi) who has come to the university to interview him.

Meanwhile, Ray (Dwayne "The Rock" Johnson), a L.A.-based helicopter rescue pilot, finds his plate full once the first quake hits. His first task is to save his soon-to-be-ex-wife, Emma (Carla Gugino), from a collapsing skyscraper. Then, with her in the co-pilot's seat, it's off to San Francisco to protect his college age daughter, Blake (Alexandra Daddario). Blake, accompanied by her mom's cowardly boyfriend, Daniel (Ioan Gruffudd), becomes trapped and is left to fend for herself by her companion. Helped by a couple of British visitors, Ben (Hugo Johnstone-Burt) and Ollie (Art Parkinson), she seeks a reunion with her Mom and Dad, unaware that quake #2 is on its way. 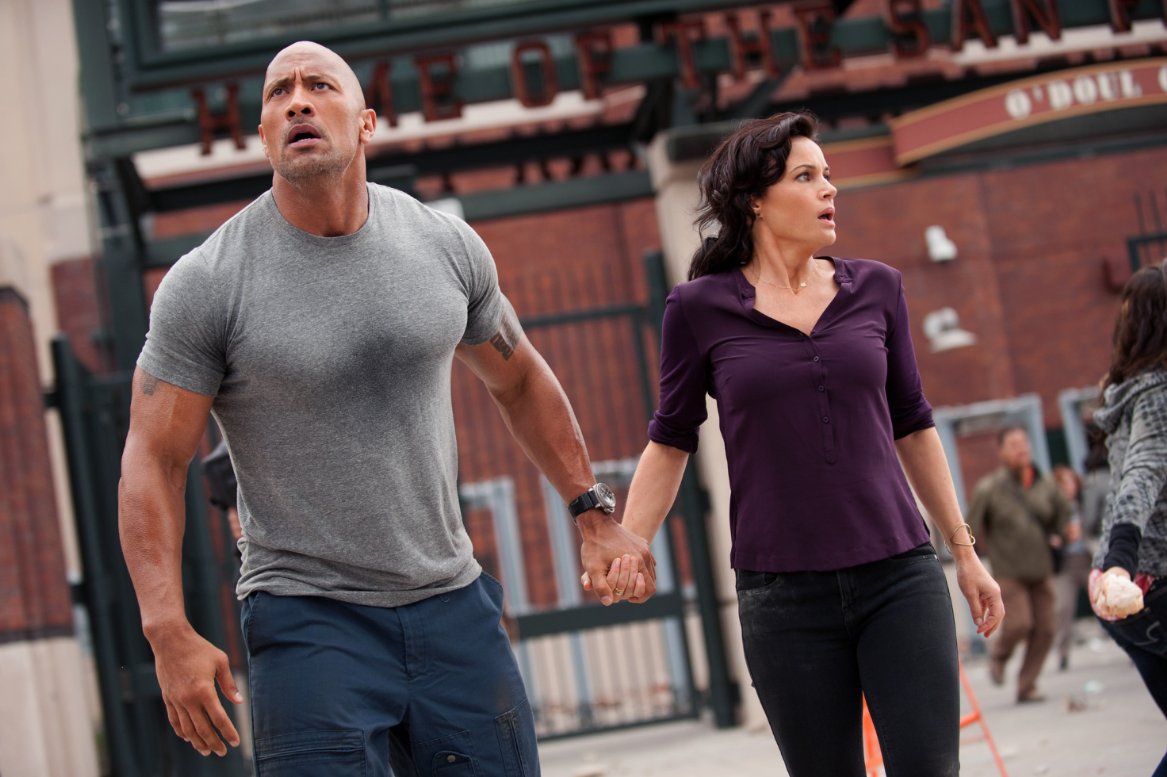 Paul Giamatti is perfectly cast as the rumpled scientist and his scenes are by far the most interesting. It causes one to wonder if San Andreas might have worked better if the entire film had focused on his character. The equally cheesy but more entertaining Twister adopted that approach by making its protagonists storm chasers seeking new ways to predict tornadoes. As rescue fireman Ray, The Rock is miscast. The film not only fails to make use of his unique talents (he throws only one punch) but expects him to do some subtle emoting that's not one of his strong suits. Carla Gugino and Alexandra Daddario are on hand to provide eye candy, with the latter making her first appearance in a bathing suit. It's possible to praise Gugino's acting since it consists mainly of expressing shock and awe at images that were added in post-production.

Whatever quibbles one might have with San Andreas, and the list of problems is a long one (including a bastardization of physics and geography that will give the science community a collective apoplexy), it at least showcases the disaster. Granted, all the most spectacular sequences are available in the trailer, essentially making it unnecessary to sit through the entire 114-minute movie, but at least the film's budget is on screen. The central fault in San Andreas' structure is a common one for disaster movies: with all the attention on the cataclysm, narrative and character development are victimized. As a result, the world is populated by paper-thin caricatures navigating the devastation. What looks impressive in a 30-second TV spot or 2-minute trailer becomes tedious when it's apparent we're going to spend far too much time with the humans. And, as any porn connoisseur will testify, it's all about the "money shots" not the passages of dialogue in between.