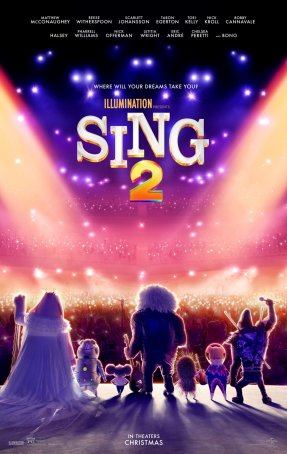 Back in 2016-17, the animated pop song cover-a-thon called Sing cashed in to the tune of $270M domestic/$634M worldwide. (Cue the “cha-ching” cash register sound.) A follow-up was a preordained necessity, lack of storyline be damned. So, five years later, koala Buster Moon (Matthew McConaughey) and his band of merry singers – including Rosita the pig (Reese Witherspoon), Johnny the gorilla (Taron Egerton), Meena the elephant (Tori Kelly), Gunter the pig (Nick Kroll), and Ash the porcupine (Scarlett Johansson) – are all back. They sing, they dance, they do all sorts of animated spectacle things. Kids will have fun, parents probably won’t be bored, but will anyone really care? Sing 2 is a product and, like many products, it exists mostly to distract and make money.

The lack of story is apparent early-on and doesn’t get better as the proceedings advance. And, although the songs are still the attraction, they are considerably weaker than in the first movie (possibly because all the good/obvious ones have been used up). Prince’s “Let’s Get Crazy” is an early highlight. After that, it’s tough to remember much until the very end. Like pop music of the last 30 years, there’s a certain sameness to everything. (The movie dearly misses the Sinatra stylings of Seth MacFarlane, if only to break up the monotony.) 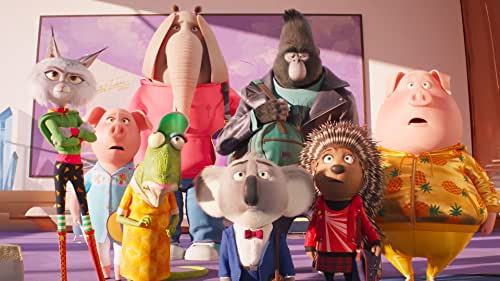 The story is just an excuse to bring back as many of the original anamorphic singing critters as possible. When the curtain rises, Buster’s singers are packing a small theater but the koala has big dreams. He wants to go to the animal equivalent of Las Vegas (Redshore City) and play to huge audiences. The arrival of a talent scout provides him with an opportunity; all it takes is a little lying to pave the way to getting an audience with mega producer Jimmy Crystal (Bobby Cannavale), who in intrigued by Buster’s big fib: that he can get the reclusive rock star Clay Calloway (Bono) to come out of seclusion and return to the stage. When Crystal learns he has been bamboozled, he issues an ultimatum: Get Clay…or else.

While Sing 2 relies heavily on the big-name vocal talents from the first film, there are a few newcomers: Bobby Cannavale as the thuggish Crystal; Halsey as Crystal’s airheaded daughter, Porsha; and Bono as Clay Calloway. MIA are Seth MacFarlane and John C. Reilly. Most of the voice actors, whether singers by trade or not, acquit themselves admirably when belting out a tune. The most interesting “meta” situation occurs when Bono covers one of U2’s biggest hits (in what is unquestionably the film’s most rewarding moment). 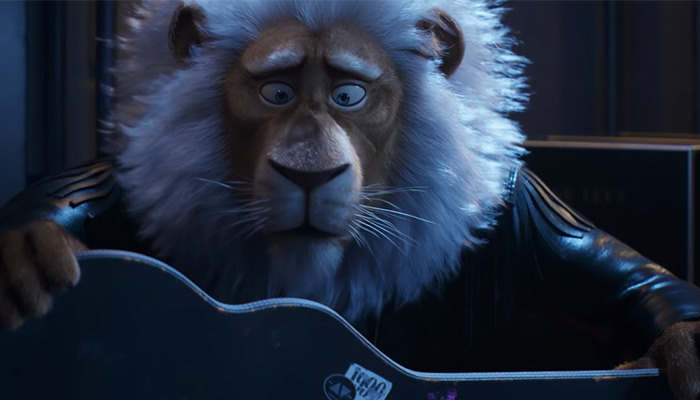 Visually, the film is adequate – if barely so. Illumination, which produced the film, apparently didn’t relish comparisons with Disney Animation or Pixar so they opted not to compete, instead relying on the same designs and approach they used five years ago. There isn’t a single visual moment that stands out. Excepting Encanto, the Walt Disney-distributed 2021 animated catalog was lackluster but one constant was the high quality of the animation. The fall-off to Sing 2 is dramatic. It wouldn’t be a stretch to say this is closer to a high-quality TV cartoon than to a top-of-the-line animated feature.

Like Trolls 2 (Trolls: World Tour), Sing 2 seeks to capitalize on the multigeneration appeal of the songs for older viewers while hoping the animated hijinks will keep kids enraptured. It worked for the 2020 film so there’s no reason it shouldn’t work for this one. It’s designed to be crowd-pleasing and, as a painless diversion, it works, even if the cynic in any viewer will recognize why it exists. The triumphant ending of Sing 2 almost makes up for an otherwise uninvolving and derivative story. Almost, but not quite.