Eddie the Eagle is a classic “underdog overachieves” sports story complete with all the trappings. It’s the kind of film that pulls out all the stops to get an applauding audience to its feet. Terms like “feel good” and “upbeat” apply. Director Dexter Fletcher’s biopic is warm and cuddly and largely without villains. It’s all about beating the odds, overcoming the system, and attaining one’s dream. Like the real Eddie’s 1988 Olympic experience, however, the movie’s memory is likely to fade fast.

As those who watched the Calgary Olympics may remember, Eddie became an international celebrity - not because he won anything but because he failed spectacularly. He didn’t have an “agony of defeat” moment but, as the lone British skiing long-jumper in competition, he finished last in both the 70m and 90m events. He was feted for his exuberance and antics, which appealed to the predominantly Canadian and U.S. crowds. One could almost wonder whether this was part of the birth movement of reality TV: following individuals with charisma and drive instead of those with innate talent.  In the late 1980s, Eddie was a controversial figure in ski jumping circles; new rules were devised to eliminate the possibility of another such “black eye.” Indeed, despite trying three more times (in 1992, 1994, and 1998), Eddie was unable to qualify for another Olympics. 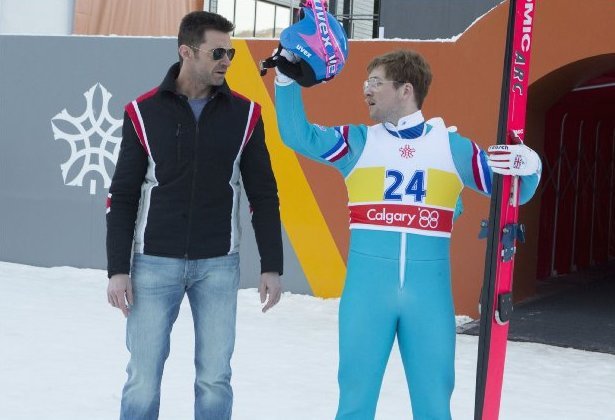 Eddie the Eagle fictionalizes the main character’s life to the point where it’s almost unrecognizable. The only truths that remain in Sean Macaulay and Simone Kelton’s screenplay are those that were captured by the cameras in Calgary. Taron Egerton reproduces Eddie’s offbeat charm, turning him into an Asperger’s afflicted champion of the undertrodden. Hugh Jackman lends some star power to the otherwise low-key film, playing Eddie’s hard-drinking American coach, Bronson Peary. A significant part of Eddie the Eagle is about the bonding between these two men and how Peary’s attitude toward Eddie changes from annoyance to admiration. This relationship works in the context of a movie but nothing about it is grounded in reality. In fact, Peary isn’t a real person and all the training activities in Germany are made up. The real Eddie trained in Lake Placid under the guidance of two men, neither of whom was named “Bronson” or “Peary.”

Eddie the Eagle is The Karate Kid crossed with Rudy. Here, the role of Mr. Miyagi is played by Jackman and there’s no “wax on, wax off.” It makes a refreshing change, however, to find a sports movie that isn’t about winning. The movie doesn’t try to trick us into thinking Eddie might be able to capture a medal in Calgary. This isn’t about his becoming enmeshed in a medal competition; it’s about him completing his jumps. It’s about personal courage and, from that perspective, tells an engaging story. It doesn’t make demands on the viewer. 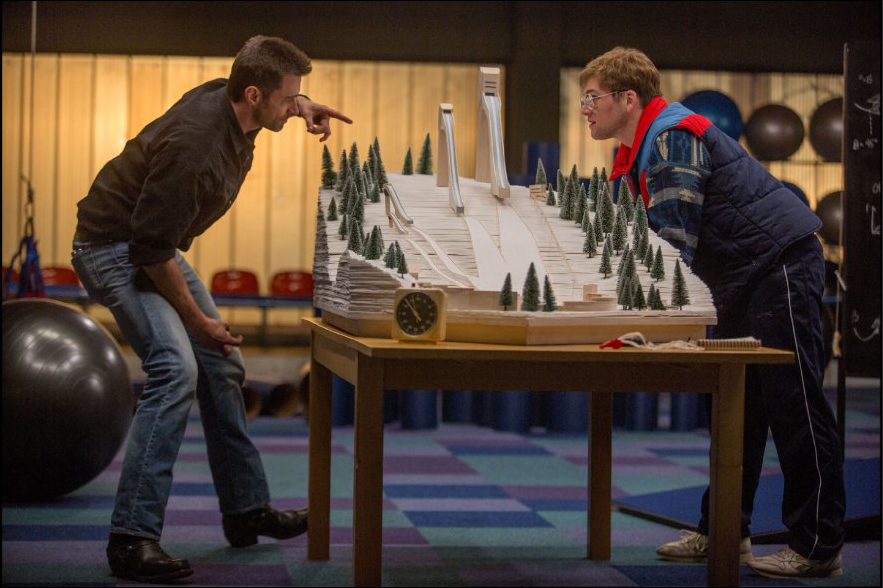 This becomes the third feature film to be set at least in part at the Calgary games. The others were 1992’s The Cutting Edge and 1993’s Cool Runnings, both of which are about unlikely competitors achieving greatness (although The Cutting Edge was as much a romance as a sports movie). Eddie the Eagle’s filmmakers have admitted to being influenced by Cool Runnings and the Jamaican bobsled team gets a call-out. The ski jump sequences are effectively realized by Fletcher and his cinematographer, George Richmond. By using a combination of point-of-view shots, close-ups, and distant footage of a double, the illusion of Egerton-as-Eddie is maintained.

As tempting as it might be to promote this as a “family film,” there’s a sequence contained herein that may give some parents pause. As part of the training, Eddie is asked to envision the jump and landing as having an orgasm during sex with Bo Derek. Yes, you read that right. This is how Bronson teaches Eddie to let go. Euphemisms are employed but there’s no mistaking the intention. The movie isn’t really for children anyway - with its nods to nostalgia (which includes a Vangelis-inspired electronic score), Eddie the Eagle will find greater favor with older viewers than younger ones.

Eddie the Eagle is hokey. It’s clichéd, manipulative, and old-fashioned. Yet, despite those qualities (or perhaps because of them), it’s charming. Even cynics may find themselves cracking a secret smile on the way out of the theater. This isn’t great art but it is good fun.