In the marketing material for Sonic the Hedgehog, Paramount’s synopsis begins with the following words: “Based on the global blockbuster videogame franchise from Sega…” Little more needs to be said. In the grand tradition of other motion picture adaptations of videogames, Sonic the Hedgehog is as creatively bankrupt as it is market-driven. It’s a 99-minute commercial designed to drive sales of merchandise. Okay, it’s not as bad as Super Mario Brothers, but that’s damning with faint praise.

Sonic the Hedgehog is really an animated film with a few human actors infiltrating the proceedings. One wonders why director Jeff Fowler didn’t dispense altogether with people. The film has the same juvenile appeal that many lesser animated productions have. We’re not talking Disney/Pixar or Dreamworks here. The film, with its bright colors and adorable title character, may find favor among the seven-year-old crowd. Older viewers are likely to lose patience with the predictable plot and pointless action sequences before the halfway mark.

This is an “origin story,” as if a speedy blue hedgehog needs such a thing. Sonic (whose voice is provided by Ben Schwartz) is a refugee from a distant planet who has used his magic rings to travel across space and time to Earth. While there, he acts like a Peeping Tom, observing the activities of small town policeman Tom Wachowski (James Marsden) and his wife, Maddie (Tika Sumpter). One day, loneliness gets the better of Sonic and, in a fit of pique, he unleashes an EMP that knocks out power to the entire area. The government takes notice and sends their best evil genius, Dr. Ivo Robotnik (Jim Carrey), to ascertain the cause and take control of the situation. This forces Sonic to reveal himself to Tom and the two go on the run from Dr. Robotnik, headed for a showdown in San Francisco.

Jim Carrey’s cartoonish villain allows the comedian to shamelessly overact in a way he hasn’t been able to in a while. For many years now, Carrey has been struggling to evolve as a performer, distancing himself from roles that echo his early screen successes. Dr. Robotnik recalls the kind of character a younger Carrey would have embraced – a preening Wiley Coyote with a constipated expression and a mustache made for twirling. Carrey is easily the best thing about Sonic the Hedgehog, although that’s not saying much. 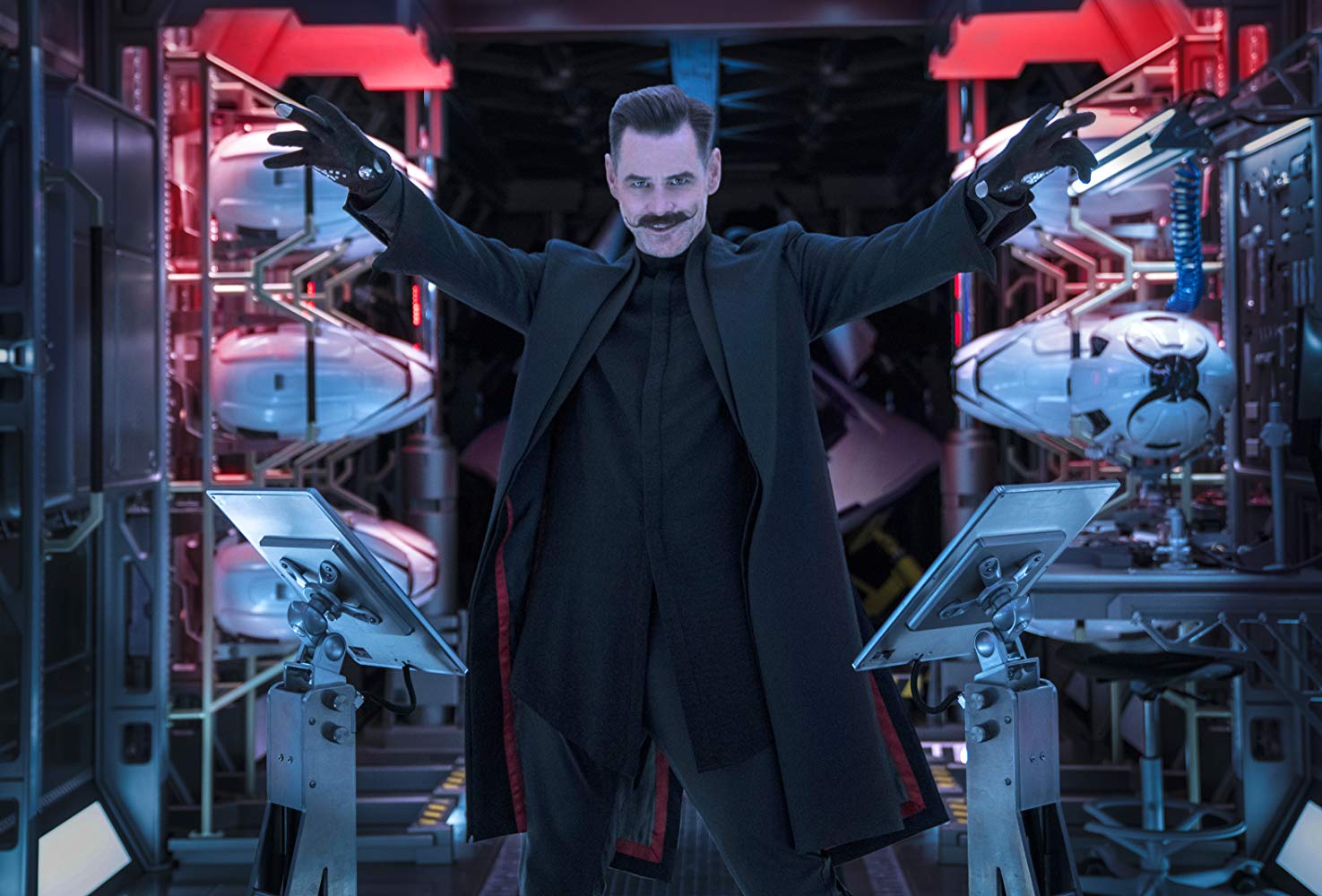 My guess is that longtime fans of the videogame franchise won’t care one way or the other about the movie, much as last year’s Detective Pikachu or the ongoing Angry Birds series haven’t added anything to the playing experience. The brand’s recognizability is the movie’s primary asset. One wishes the filmmakers had put more effort into the hackneyed story of an unlikely friendship between an Earth man and an alien CGI creature. E.T. this isn’t.

The film’s obviousness and predictability make a review superfluous. You know everything about this movie before watching it and nothing between the Paramount opening logo and the end credits offers any surprises – or, for that matter, much in the way of enjoyment. Young kids will love it and, as parents, it’s the duty of many an adult to take the hit. 27 years ago, when I reviewed Super Mario Brothers, the progenitor of this unfortunate genre, I wrote the following: “The fun of playing the video game is that you're involved – you control what the little figure on the screen does. With the movie, on the other hand, you're a bystander, sitting in a seat watching a bunch of actors run around getting absolutely nothing done and speaking dialogue that could have been written by a precocious five-year old.” Technology has moved on but not much has changed. Whatever else it may achieve, Sonic the Hedgehog is unlikely to elevate the based-on-a-videogame category above the dismal level where it has wallowed for the past quarter-century.