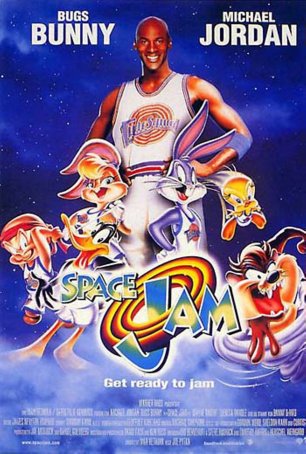 Joe Pytka is known best as a TV commercial director. He's the man behind the "Thank you for your support" Bartles & James ads, the "Bo knows" Nike ads, and the Ray Charles "Uh huh" Diet Pepsi ads. In fact, according to his bio, he has directed some 5000 commercials. With Space Jam, his second feature film, make that 5001. This movie, which could just as easily be called The Michael Jordan Worship Show, plays like a 90-minute homage to His Airness, selling his every virtue. By the end of this picture, Jordan, whose status as a pop icon has never been in dispute, has been elevated to the level of a demi-god.

It was inevitable that Jordan would eventually get into the movies. After all, Shaquille O'Neal has already made the move, and Jordan has more charisma and presence both on and off the court. The decision to have him play himself is the right choice, since Jordan's acting range seems to be on par with that of Steven Seagal. Space Jam's problem isn't that Jordan is the star, but that the tone is sickeningly reverential. There are only a few times when Space Jam dares to poke fun at its leading man, and, on those occasions, it does so gently. Opportunities for satire exist, but Pytka pulls nearly every punch. The bland results lead to a movie whose entertainment value is fine for kids, but marginal for adults.

On the other hand, any movie that features the delightful Looney Tunes characters can't be all bad, and, indeed, the writing for Bugs Bunny and friends is as crisp as ever (except when they're bowing and genuflecting before His Airness). Just about everyone from the Warner Brothers cartoon world is there, from Bugs and Daffy to Foghorn Leghorn and Marvin the Martian. There's even a new character, Lola Bunny, who gives Bugs a love interest and adds a little sex appeal to the otherwise all-male cartoon character roster. Road Runner and Wylie Coyote are on hand as well, the latter chasing the former. I wish there had been more of these two – they were always the funniest the Looney Tunes had to offer. 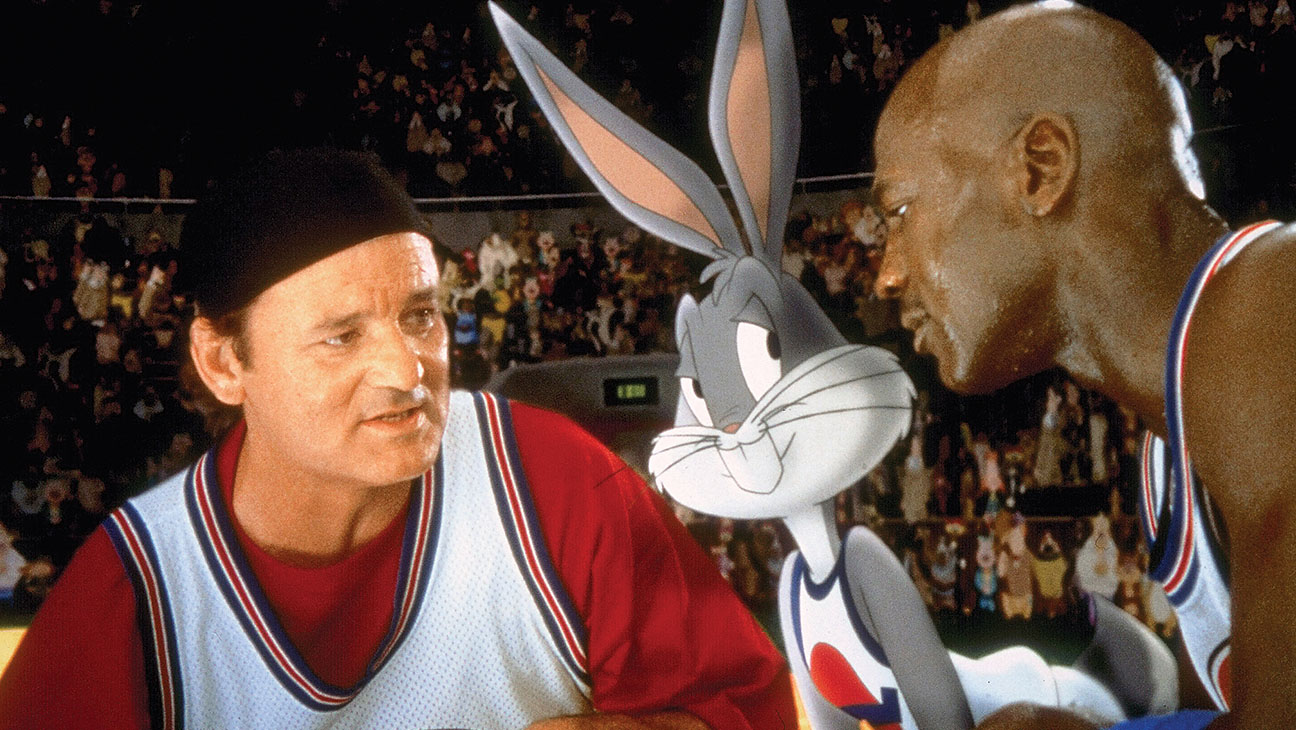 The story, which would like to follow in the footsteps of the groundbreaking Who Framed Roger Rabbit?, mixes live-action and animation. Technically, the film isn't quite up to Roger Rabbit's standards, but it's a huge improvement over Ralph Bakshi's Cool World, which mingled Gabriel Byrne and Brad Pitt with a bunch of sleazy cartoon creations. Certainly, from a visual standpoint, there's nothing wrong with Space Jam. In fact, a few sequences are positively dazzling.

Space Jam is about a big-time basketball game between the Looney Tunes team and the Monstars, a group of aliens under the lead of the evil Swackhammar (voice of Danny DeVito) who have stolen the powers of NBA stars Charles Barkley, Patrick Ewing, Muggsey Bogues, Larry Johnson, and Shawn Bradley. In order to stand a chance against this seemingly-invincible team, Bugs summons Michael Jordan to Looney Tunes land and explains that if the good guys lose, they'll be taken back to the Monstars' home planet as slaves. Jordan, who has been playing baseball on Earth, agrees to help, although he wonders how rusty his basketball skills are. He is soon put to the test as the contest begins. 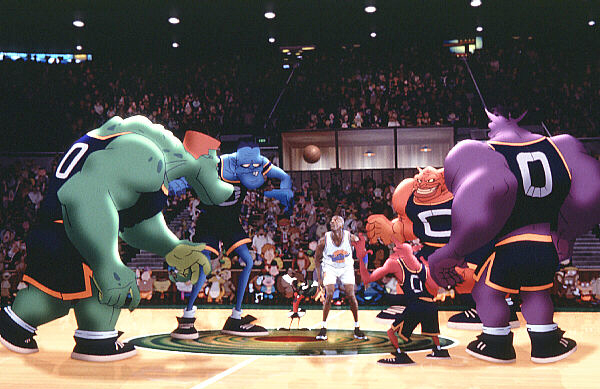 There are a number of clever moments in Space Jam, some of which are visual and some of which lie in the dialogue. Several pass quickly or occur in the background, so it takes a keen eye to spot them. A couple of the better, more obvious ones include a nod to Pulp Fiction and a biting dig at Disney. Bugs, in response to Daffy's suggestion that they name their basketball team after his species, quips: "What kind of Mickey Mouse organization would name their team the Ducks?"

Bill Murray, Larry Bird, Charles Barkley, and a host of real-life sports figures have cameo appearances. Aside from Jordan, the only human with any significant screen time is Wayne Knight, who plays an irritating baseball publicist. Strangely, however, amidst all the two- dimensional cartoon characters, the flattest figure of all is Jordan. The basketball star's power might be the drawing card for Space Jam, but the Looney Tunes group steals the spotlight – at least as often as Pytka will let them.