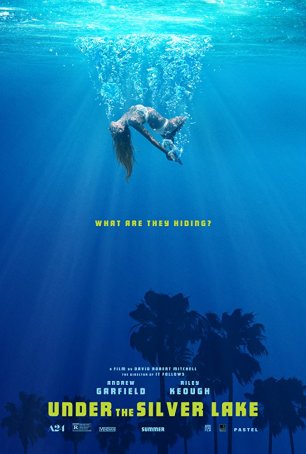 I wanted to like this movie. With its neo-noir concepts and David Lynch-inspired execution, it’s far enough off the beaten path to be enjoyed for its sheer outrageousness. Director David Robert Mitchell, who made the criminally underrated horror film It Follows, doesn’t settle down in a quiet comfort zone for his third feature. Instead he reaches…but his reach exceeds his grasp (apologies to Robert Browning). Despite all the devilishly clever moments, freaky episodes, and general weirdness, Under the Silver Lake is ultimately unsatisfying. The mind-blowingly dumb ending doesn’t work on any level and it tarnishes all the good will built up in the (admittedly too long) first 130-or-so minutes.

Sam (Garfield) is a seemingly unemployed stoner who spends his days gazing through his binoculars at the other denizens of his Los Angeles apartment complex. He’s so far behind on his rent that he’s about to be evicted. That’s when he spies Sarah (Riley Keough), a lithe blonde in a bikini, and it’s something at first sight. They meet, go inside for a conversation about masturbation (“everyone does it, right?”) and, after getting stoned and playing footsie, they are interrupted by the arrival of Sarah’s roommates. “Come back tomorrow afternoon,” she offers, “and we’ll hang out.” Sam assumes “hang out” means “have sex,” but when he knocks on her door the next day, she’s gone. The apartment has been cleaned out. Sam starts looking for her but his half-assed investigation leads him down the rabbit hole. He comes to believe that (a) Sarah is dead, (b) her death is entwined with the disappearance of a very powerful L.A. businessman/philanthropist, and (c) there’s a massive conspiracy hiding some dark and depraved people.

Watching Under the Silver Lake requires the viewer to buy into the off-kilter world Mitchell has created – a place that owes a little to Hitchcock, a little to Terry Gilliam, and a lot to David Lynch, who might as well have been the filmmaker’s silent muse while making this movie. The Blue Velvet influences are bursting at the seams. However, Lynch’s uncompromisingly wacky scenarios hold together better than Under the Silver Lake and this movie’s climactic revelations are decidedly disappointing. The problem isn’t with the unanswered questions but the ones where resolutions are provided.

Mitchell enjoys in-jokes and poking fun at Hollywood’s celebrity-obsessed culture. In one scene, Andrew Garfield is shown to have an issue of “The Amazing Spider-Man” comic book on his coffee table. (He glances at it with a look of bemused familiarity.) Alfred Hitchcock’s tombstone gets a clever reveal. A mysterious songwriter waxes nostalgically about all the tunes he’s written while dropping cryptic hints about humanity’s nature. A pernicious skunk (an apt metaphor for some denizens of the Hollywood Hills) becomes one of Sam’s most indomitable adversaries.

Garfield makes Sam the anti-Peter Parker. A rootless slacker with anger management issues, Sam is not a nice guy (witness his reaction when he catches a couple of kids vandalizing cars). But, although the film’s narrative mimics a redemptive arc, that’s not where Under the Silver Lake is going. Like most of the movie, Mitchell pulls the rug out from under this familiar, mundane progression.

The film’s journey to theaters has been as thorny as the one Sam takes in trying to uncover the truth about Sarah’s disappearance. Under the Silver Lake made its first public appearance at the 2018 Cannes Film Festival, where it was charitably described as “divisive.” Distributor A24 moved its release from mid-summer 2018 to December, then shifted it again to the no-man’s land of April 19, 2019. It has been unceremoniously dumped into a few theaters with no fanfare. Although I can’t claim the film works in a conventional sense, this is the kind of movie that gets rediscovered at some future date and labeled with the term “cult classic.”