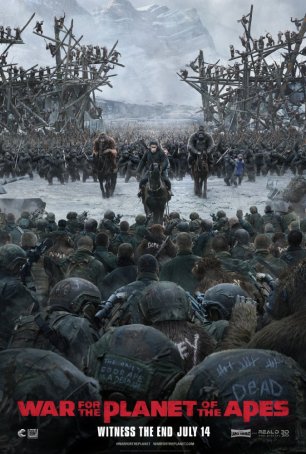 Matt Reeves, who also helmed Dawn of the Planet of the Apes, wasn’t content simply to allow the movie play out as expected. After all, we’ve known the end point for 50 years. The easy, summer-friendly way to do things would have been to pit the dwindling human forces against the apes in a winner-take-all contest. That’s what the title implies. That’s what the trailer hints at. That’s what it looks like during the first 15 minutes. But Reeves, who co-wrote the film with Mark Bomback, has bigger fish to fry. Leaning heavily on the allegorical aspects of the series, he spins a tale that touches on racism, the evils of war, the dangers of obsession, the poison of revenge, and the importance of sacrifice. The movie is at times exciting (there are still plenty of battle scenes), occasionally funny (one character has been incorporated almost exclusively for comedic relief), and ultimately poignant. The movie branches off onto an unexpected route, taking inspiration not only from the other Planet of the Apes films but from classic war pictures like The Great Escape and The Bridge on the River Kwai. Reeves doesn’t merely name-check those films; he incorporates them into War for the Planet of the Apes’ DNA.

The story is told from the apes’ perspective. It’s obvious from the early scenes that they are the protagonists and the humans are the villains. The primary antagonist, Woody Harrelson’s Colonel, is introduced obliquely and not given a full scene until the movie is a third of the way over. The main character is the ape Caesar (Andy Serkis), the leader who has for two movies sought peaceful coexistence with the humans. With his rival Koba (Toby Kebbell) now existing only in his nightmares, Caesar faces little opposition from within but the Colonel is bent on genocide. He will accept nothing less than the obliteration of the apes and his brutal tactics force Caesar to confront the darker aspects of his nature. Accompanied by two companions, Rocket (Terry Notary) and the orangutan Maurice (Karin Konoval), Caesar sets out on a suicide quest to track and kill the Colonel. Along the way, they are joined by an orphaned human girl, Nova (Amiah Miller), and a fearful loner who goes by the name of “Bad Ape” (Steve Zahn).

The motion capture special effects that transform Andy Serkis into Caesar are the most impressive technical achievement of the film. We never think of Caesar as anything but a fully realized individual. The fact that we don’t notice that he’s a product of computer graphics and behind-the-scenes wizardry is a testimony to how effective the illusion is. His opponent, the human Colonel, is played by Woody Harrelson with no aid from CGI. Harrelson is intentionally two-dimensional – as cold as ice with more than a hint of Marlon Brando from Apocalypse Now. Harrelson’s portrayal is perfect. As likeable as the actor often is, there’s nothing friendly or approachable about the Colonel. He’s warped, twisted, and dangerous (although not without reason – Reeves is careful to provide a rationale for his motivation, something often missing with villains.)

Although designed and positioned as summer escapism, War for the Planet of the Apes may surprise some with its seriousness and intensity. From the beginning, there’s a sense that dark things can happen…and they do. That’s not to say that the film is a relentless downer. It is first and foremost an adventure film and the PG-13 rating assures that the violence never becomes too extreme. This is a more adult movie than either of its immediate predecessors and parents should take note before bringing a child.

Apparently, another Planet of the Apes movie has been commissioned. There’s enough of a window that one could be squeezed in after the ending of War, but that might be a mistake. Reeves effectively wraps up the prequel series and anything more, unless developed with the greatest of care and creativity, could feel like an unnecessary appendage. Perhaps the best next step would be to (once again) remake Planet of the Apes…but from the simian perspective. In any case, first with Dawn and now with War, Reeves has established himself as a director to be reckoned with. War for the Planet of the Apes bucks the trend of late-franchise films as creatively bankrupt cash grabs. This is a vital, original, and emotionally potent chapter to one of the longest-running movie series out there. It will easily be one of the summer of 2017’s best films and, at the end of the year, it will likely find a space on many respectable Top 10 lists.