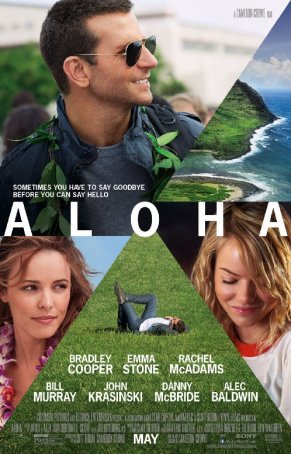 During the first two decades of his movie career, Cameron Crowe was a critical and popular darling, turning out titles like Fast Times at Ridgemont High (which he wrote), Say Anything (wrote/directed), Jerry Maguire (wrote/directed), and Almost Famous (wrote/directed). Crowe's fall from grace came in 2001, when Vanilla Sky was met with a tepid response by the critics and was ignored at the box office. 2005's Elizabethtown was the filmmaker's first across-the-board failure. Following a six-year hiatus, he returned in the 2011 holiday season with We Bought a Zoo - although an improvement, it was not a "return to form." Now, four years later, he says Aloha. Scarred as a result of (negative) leaked material from the Sony hacking scandal, the film was in trouble before its release. Watching it, it's not hard to understand the studio heads' concerns. Aloha is Crowe's worst film-to-date, eclipsing Elizabethtown for that distinction and raising questions about whether the director has lost his touch (á là Rob Reiner). It's hard to find a level on which Aloha works. It's a murky, muddled mess. There are some good individual scenes - mostly featuring the kind of interpersonal interaction that has become Crowe's hallmark - but these exist in isolation. The narrative is clunky and disjointed with interminable stretches that don't coalesce. The acting by lead Bradley Cooper is uneven and lacking in charisma and it's hard to figure out whether some of the other performers - Alec Baldwin and John Krasinski in particular - are playing for laughs or attempting to develop serious characters. 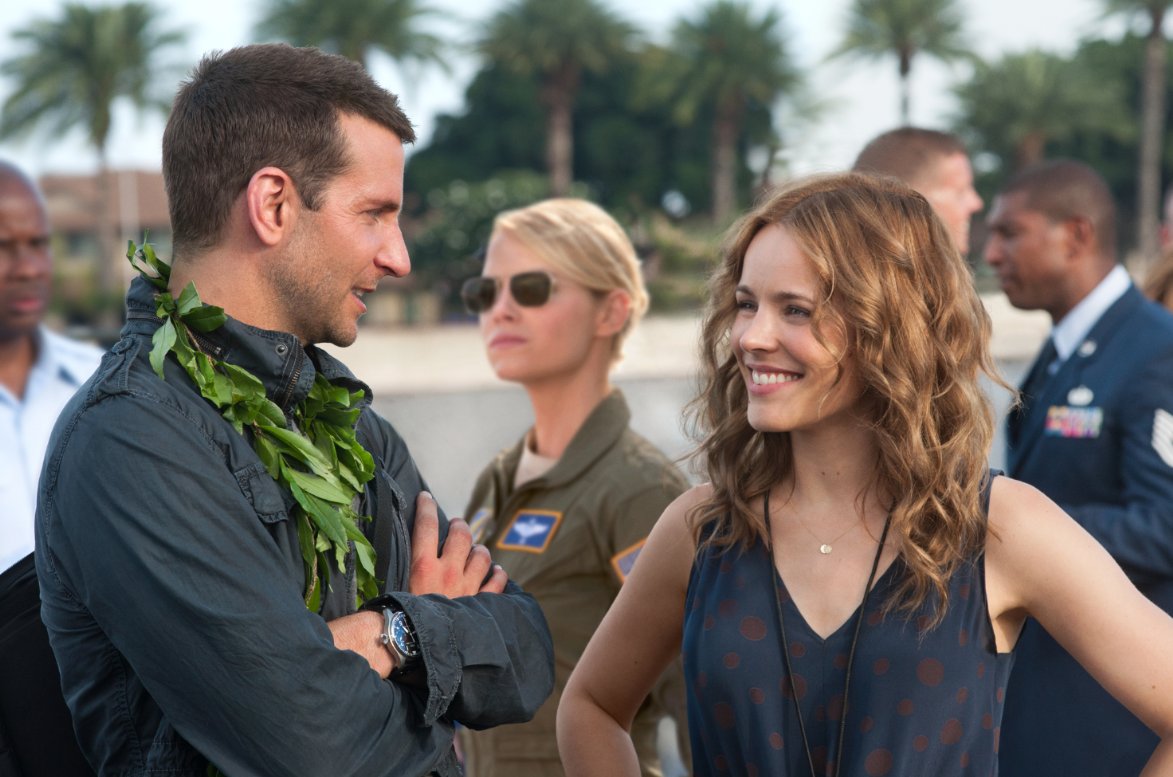 For a while, it's a mystery where the meandering movie is headed. Brian Gilcrest (Cooper) has returned to his old stomping grounds of Hawaii to do a job for his former boss, multi-billionaire Carson Welch (Bill Murray). Brian has a history with Carson - he did shady jobs for the corporate magnate in Afghanistan, where he suffered a debilitating injury. He sees this as an opportunity to get back into the game. It also means re-connecting with an old flame, Tracy (Rachel McAdams), and having a chance to ignite something with his combustible aide, Allison (Emma Stone). For about half the movie, Crowe obfuscates Brian's purpose in Hawaii - it seems to be to run a ceremony but that apparently is a cover for his real job. Unfortunately, when the truth is revealed, it's nonsensical. The filmmaker may be a cynic when it comes to the military-industrial complex but he has little understanding of how things actually work. Maybe the big climax is intended to be allegorical. Maybe Crowe is trying to make a point. Whatever the case, it's a big mess and not especially satisfying for a grounded viewer. The last scene raises some confusing questions that come out of nowhere.

Crowe's films often undergo post-production surgery.  Almost Famous, for example, lost 40 minutes between the director's cut and the theatrical release. The film is so disjointed that one can guess too much was trimmed. But even if the production flowed better, it can't excuse the abysmal conclusion. Any involvement the audience may feel when it comes to the romantic triangle fizzles when Crowe shifts his focus to the Bill Murray or Alec Baldwin characters.  And there's an interminable scene when Brian and Allison negotiate a deal with a native Hawaiian "king" that sets up (poorly) something that happens later. 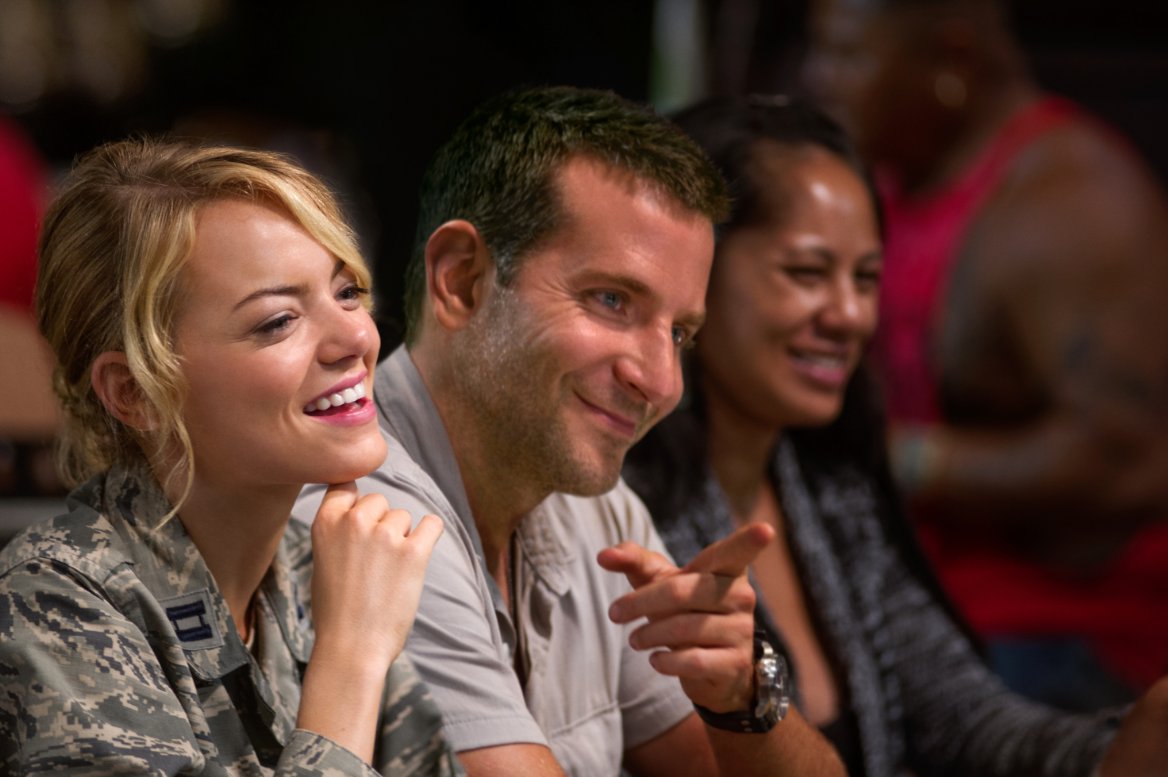 There are a few small pleasures. Some scenes between Brian and Allison have a zing to them. The repartee is sharp and there's no shortage of chemistry. Emma Stone's performance provides a caffeinated live wire overflowing with infectious enthusiasm. There's a sense of pathos in the interaction between Brian and Tracy. They know they represented the "great love" of each other's lives but they messed it up. There's never an indication they might get back together; they just spend time wallowing in what might have been.

The underlying reason for disappointment is that the premise - not dissimilar to the one of Forgetting Sarah Marshall - would seem to be in Crowe's wheelhouse.  His oeuvre has shown him to be a romantic and this is the kind of material that, handled properly, could make for an old-fashioned rom-com. Plus he has three of the hottest actors in Hollywood (including two recent Oscar nominees)… and the result is still a mess. Even his penchant for having pop music help with telling the story fails him - Tears for Fears seems more obligatory than organic.

The word "Aloha" has come to mean "hello" or "goodbye" in English. Let's hope the latter doesn't apply to Crowe's career as a film director.