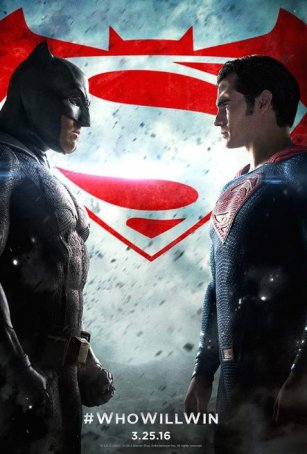 For those who thought Man of Steel was dark, you ain’t seen nothing yet. Batman v Superman, the battle royale/team-up of DC Comics’ revered superheroes, is so bleak that the sun never seems to shine, the characters’ faces can’t form smiles, and the whole affair is more depressing than fun. There’s little doubt that director Zack Snyder is trying to out-Nolan Christopher Nolan (who gets an Executive Producer credit) when it comes to leeching the light out of superheroes. Nolan, however, understood that the internal darkness needs to be a byproduct of careful character development and narrative thrust. Snyder has a more brute force approach - he doesn’t allow for the possibility of brightness or traditional heroism. Batman v Superman revels in apocalyptic visuals, death, destruction, mayhem, and brutality. Despite the title, there’s no “dawn” in this movie. It’s all “dusk” headed into a moonless, starless night.

To get to the conceit advertised by the title, the narrative goes through some interesting contortions. Batman v Superman figures out a way to establish the superheroes as rivals rather than buddies. Each questions the other’s legitimacy. Batman (Ben Affleck) watched friends die as a result of Superman’s battle with Zod in Man of Steel. He’s also concerned about the future possibility of Superman turning against his adopted planet.  Meanwhile, Superman (Henry Cavill) sees the Dark Knight of Gotham as a dangerous vigilante. To even the playing field when these two square off, Snyder introduces Kryptonite. With Superman diminished, he and Batman can pound on each other for a while. Meanwhile, supergenius Lex Luthor (Jesse Eisenberg) is up to no good, although (thankfully) this time he’s interested in more than a real estate scam. 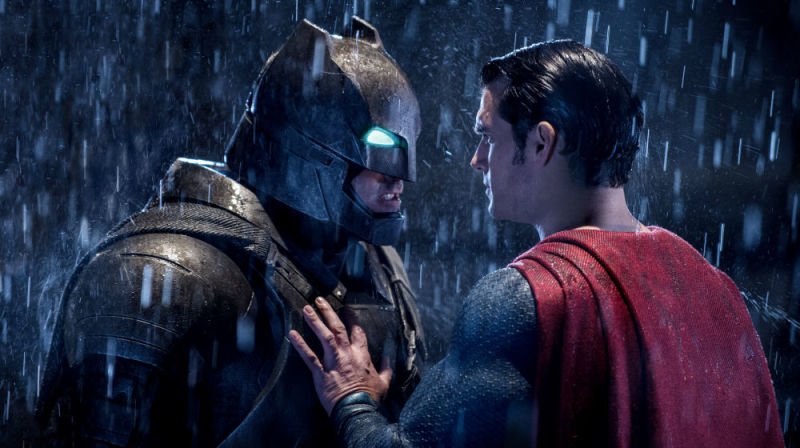 Snyder is a visual director and Batman v Superman it at its strongest during the special effects-laden action sequences. When it comes to character development, however, Snyder shows his Achilles’ heel. None of the familiar and, in some cases, iconic individuals in Batman v Superman come to life. They’re avatars. Cavill’s Superman looks the part, but where’s the heart? It’s no coincidence that the actor’s performance as Clark Kent is unimpressive or that his chemistry with Amy Adams’ Lois Lane is nonexistent. Cavill is in this film for one reason: his appearance. Put him in the suit and he’s perfect. Yet one could argue that Christopher Reeve and Brandon Routh (both inferior actors to Cavill) did better jobs.

Affleck’s Batman is poorly served. Stripped of context and dropped unceremoniously in to a new universe, the Caped Crusader comes across as a bitter man who parades around in a costume. Bruce Wayne is underdeveloped and Batman is just a guy in a bulletproof suit with a gravelly voice. The change of actor isn’t the problem (Batman, like James Bond, is flexible enough to survive a lead switch). Instead, it’s the stripping away of everything except the bare-bones origin. We don’t know who this Batman is and the filmmakers are in such a rush to get Justice League out the door that they don’t bother to establish a foundation for this iteration of the superhero. 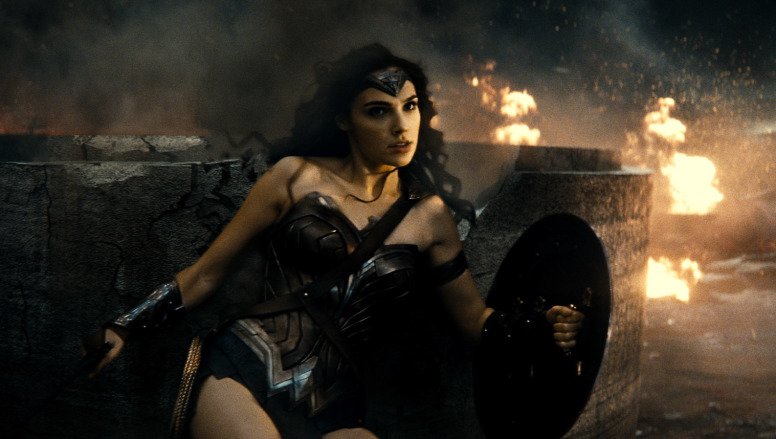 Wonder Woman (Gal Gadot) is shoehorned in as an example of fan service. Her introduction and incorporation are awkward and artificial and she serves no real purpose beyond helping to jump start Justice League. She has no story, no character, and minimal background. She’s just there. Her presence more than any other narrative cue makes it clear that Snyder views this as bridging material between Man of Steel and Justice League.

Amy Adams is unconvincing as Lois Lane. I thought she was miscast in Man of Steel and nothing in Batman v Superman has prompted a change of opinion. As a love interest for Superman/Clark, she doesn’t work and the script too often makes this supposedly strong, independent woman into a damsel in distress. Newcomer Jeremy Irons isn’t a good match for Alfred, although the character is strangely portrayed - his constant disapproval of “Master Bruce” at times verges on contempt. It’s not a comfortable or appealing relationship. 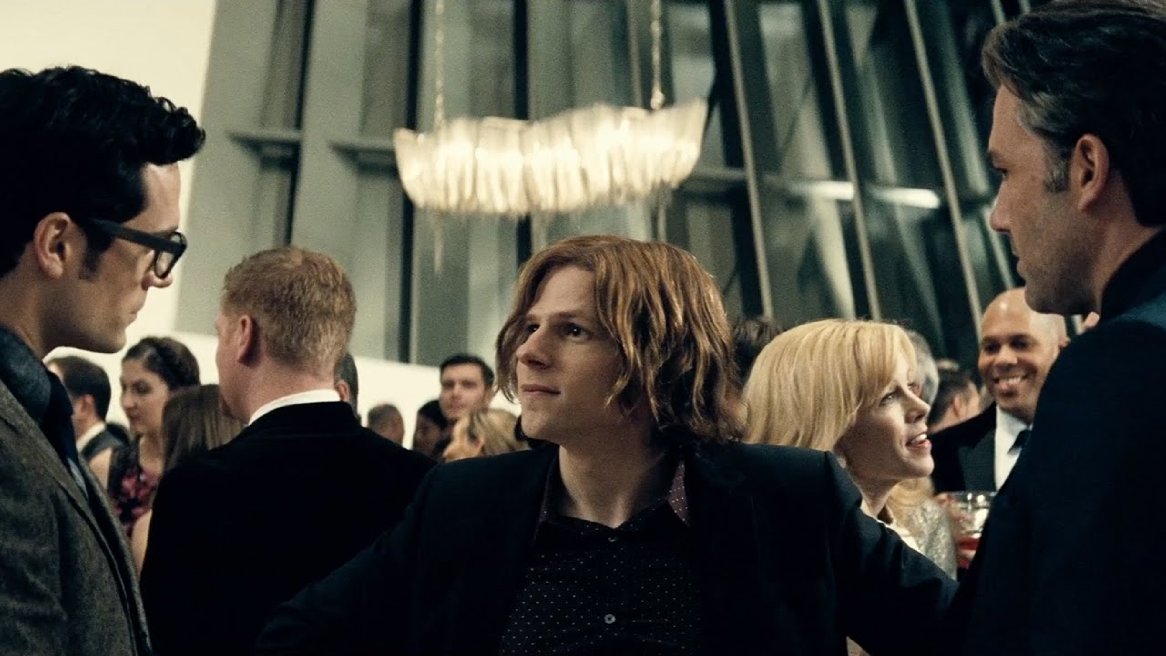 On the other hand, Jesse Eisenberg’s Lex Luthor is a breath of fresh air. Gone is the bumbling, semi-comedic version essayed by Gene Hackman and the Kevin Spacey’s more sinister one. Since this vision of Luthor is as a psychotic Mark Zuckerberg, who better to play him than the actor who did such a phenomenal job in The Social Network? Luthor’s endgame is obtuse but he’s brilliant and unhinged and that makes for a great supervillain. Plus, he’s got Kryptonite.

At 154 minutes, Batman v Superman runs too long. After a rousing first 15 minutes that show the Man of Steel Superman/Zod fight from another perspective, the film becomes a slog for the next half-hour as it introduces Batman and re-aligns Superman. Throughout, there’s too much reliance on dream sequences. Aspects of the film’s ending feel like a cheat and the movie misses an opportunity to do something powerful and radical, opting instead for the predictable climax. We’re reminded of how impermanent consequences are in most superhero movies. That wasn’t the case in Christopher Nolan’s universe. It is the case here.

Once Batman v Superman hits its stride, most viewers will feel equal parts pummeled and immersed. Snyder is a master of the dark spectacle and he pours it on starting around the movie’s midpoint. Thematic overtures - such as the role of superheroes as protectors and whether they should be “regulated” - are lost in the dust and debris of Batman and Superman’s smackdown. Still, although viewers may be riveted at times, the net experience isn’t much fun. The Avengers and The Force Awakens (to name just two) have illustrated that it’s possible to have huge stakes without turning the movie into a relentless downer. Snyder wants his film to be seen as more than a disposable “popcorn flick.” It’s too bad the only way he can think to achieve that is by singeing the popcorn and depressing the audience.