When Clue was released around Christmas 1985, it was intended to spearhead a wave of based-on-board game movies. The film’s box office failure, coupled with poor critical notices and lukewarm viewer response, stopped the “craze” before it began. Treatments for Monopoly, Life, and RISK were put on ice (although a Transformers-flavored version of Battleship made it into theaters some 27 years later – a movie I lovingly cited as having “the IQ of a rutabaga”).

Calling Clue nonsensical might be an understatement, but that’s the problem with converting a plot-less board game into a plot-centered motion picture. The comedy is uneven and there’s only so much enjoyment that can be culled from watching an ensemble of recognizable actors try to avoid complete embarrassment. Director Jonathan Lynn, making his feature debut (ahead of My Cousin Vinny, which would become his “signature” film), has a good ear for quips, puns, and amusing asides but he’s on less sure ground when it comes to slapstick. The first half-hour (or so) of Clue is enjoyably witty but, after that, it’s a downhill mudslide. 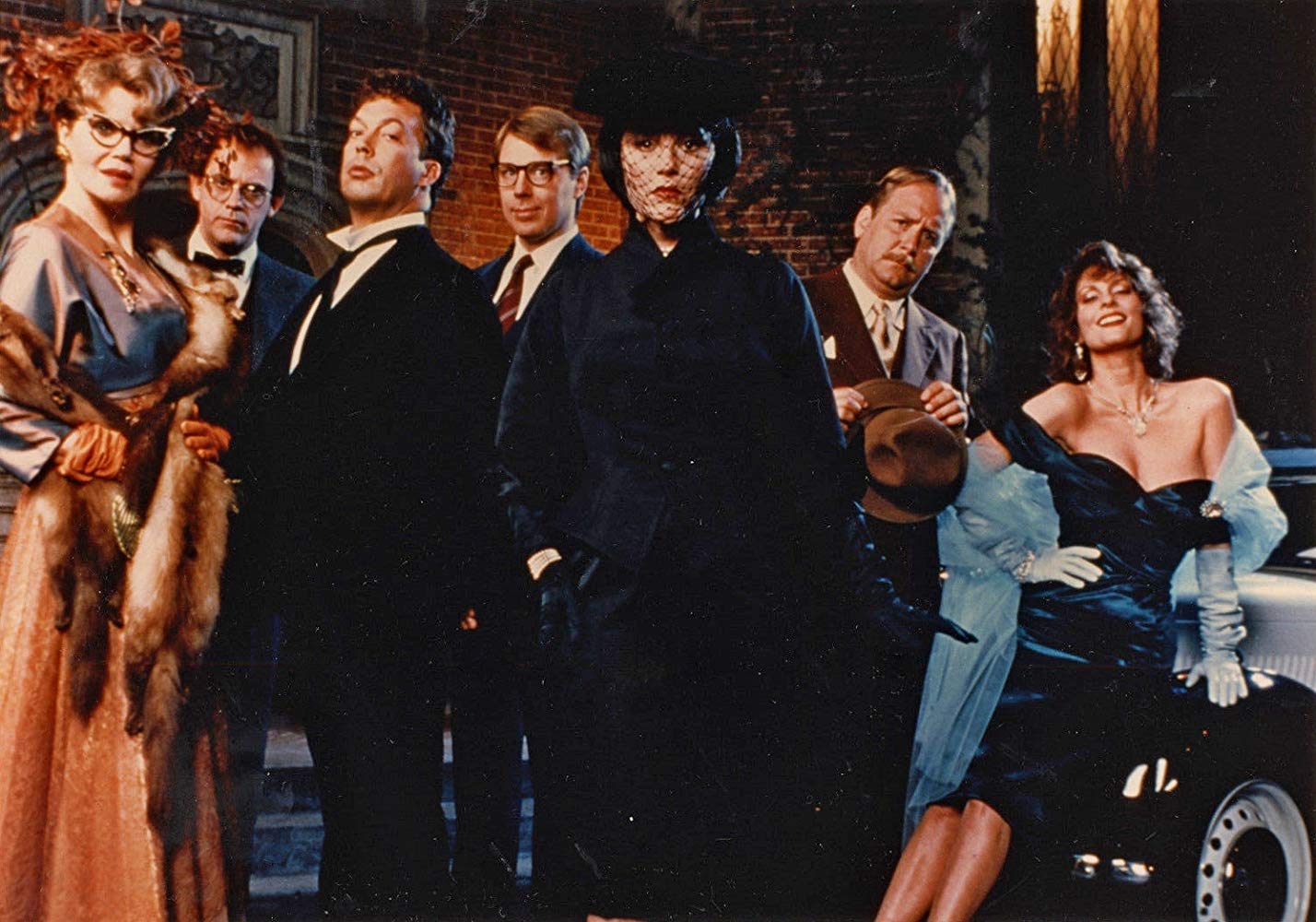 Imagine if a hugely successful film like, say, Black Panther entered theaters with three different endings. While casual movie-goers might be okay with seeing the movie once, die-hard fans would need to re-watch the production multiple times. Although no one behind Clue (writer/director Lynn, co-scribe/executive producer John Landis, and producer Debra Hill) expected it to be a hit of that magnitude, the William Castle-esque gimmick of offering a trio of different resolutions (depending on where you saw the movie) did nothing to boost attendance. Clue opened at #6 with an anemic $2M first weekend gross (coming in right behind Santa Claus: The Movie and far, far behind Rocky IV’s third week at #1). Subsequent weekends weren’t kind to it. It was out of theaters by mid-January.

The majority of Clue transpires in a gothic mansion where a butler with the appropriate-sounding name of Wadsworth (Tim Curry) has invited a group of seven guests to a mysterious dinner party. Other than Wadsworth, the only employee is the maid Yvette (Colleen Camp). To protect the anonymity of six of the attendees, code names have been assigned: Mrs. Peacock (Eileen Brennan), Colonel Mustard (Martin Mull), Miss Scarlet (Leslie Ann Warren), Professor Plum (Christopher Lloyd), Mrs. White (Madeline Kahn), and Mr. Green (Michael McKean). The seventh guest is Mr. Boddy (Lee Ving), who is currently blackmailing the other six. When the lights go out, he becomes the first of Clue’s several murder victims. Although there’s not much doubt about the weapon or the room, there’s a great deal of confusion about the killer’s identity with the movie adding two additional suspects not available in the traditional Clue deck of cards. 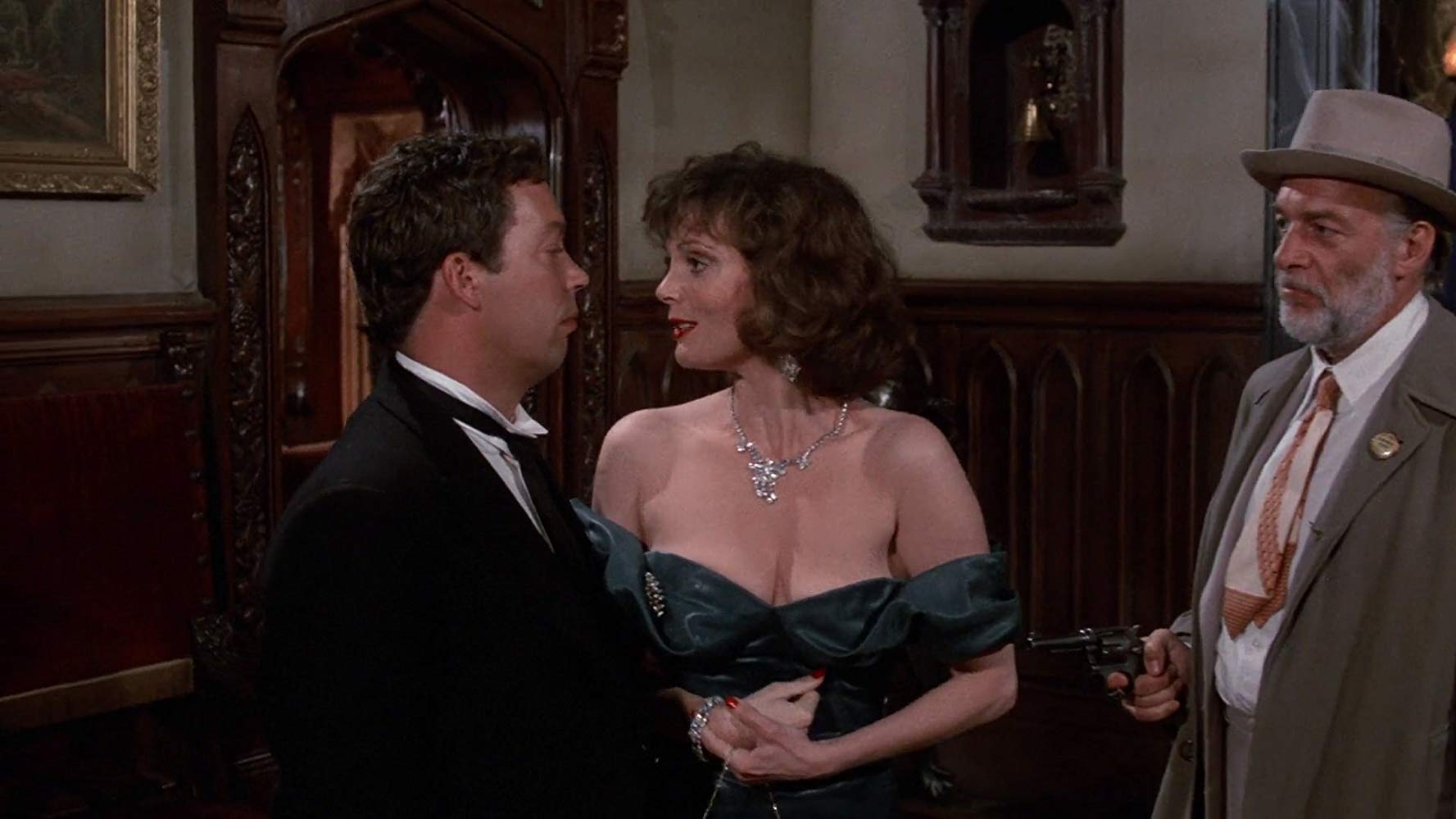 Mr. Boddy’s demise occurs about a third of the way into the movie and, since there’s no reasonable way an investigation could absorb an hour’s worth of screen time, the movie gets sidetracked with long, tedious scenes of characters wandering around the mansion’s seemingly endless corridors, finding trap doors, and discovering additional corpses. A cook, a hapless visitor, a policeman, and a singing telegram girl all join Mr. Boddy.

All three versions of Clue are identical for the first 80 minutes. Differentiation occurs in the final reel. The movie is so haphazardly composed that any of the three supplied endings can be made to fit. During its theatrical run, movie houses showing Clue commonly advertised whether they were showing “Ending A”, “Ending B”, or “Ending C” so those few who wanted to experience variations weren’t subjected to pot luck. The home video release supplies all three endings.

The cast is comprised primarily of B-plus-list actors. At the time of the film’s release, the “hottest” of these was Christopher Lloyd, who had, within the past two years, starred as the chief Klingon villain in a Star Trek movie and originated the role of Doc Brown in Back to the Future. Michael McKean, in the process of putting Laverne and Shirley’s Lenny behind him, had scored some success by hooking up with Christopher Guest and joining This Is Spinal Tap. Oscar nominee Eileen Brennan added a dose of respectability and Leslie Ann Warren, Martin Mull, Madeline Khan, and Tim Curry were familiar faces, especially for TV audiences.

Although the concept of converting a popular board game into a workable motion picture narrative died a quick death as a result of the filmmakers’ inability to make it work for Clue, the movie opened the door to the potential of cross-media enterprises – movies with toy or video game linkages and, a little farther down the road, films with amusement park tie-ins. Although Clue was a failure from an entertainment perspective, it was an important way-post in the evolution of films as merchandising arms. In this instance, however, it became clear that people would rather play the game than watch someone else’s vision of it unfold on screen.