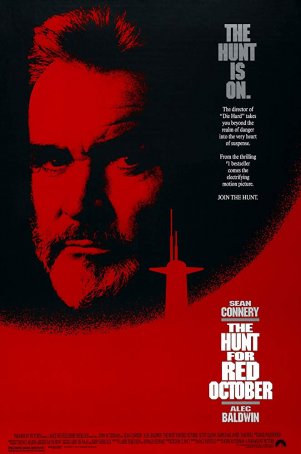 When Paramount Pictures greenlit production for The Hunt for Red October, there was no thought of it becoming the first film in a “Jack Ryan” series. Red October, Tom Clancy’s debut as an author, became an international best-seller but was initially seen as a stand-alone project. As a result, when it went into development, the screenplay made Ryan and Russian sub commander Marko Ramius co-leads. Although Harrison Ford (who would take over the role for the next two Ryan films, Patriot Games and Clear and Present Danger) was courted, he turned down the opportunity because he felt Ramius had too large a part.

The Hunt for Red October has a much different feel from any of the other Jack Ryan films (to date, there have been five plus a web series). Part of this is because, with a seasoned veteran like Sean Connery posed opposite a lesser-known actor (Alec Baldwin), concessions had to be made to enhance Connery’s scenes. Also, John McTiernan’s directorial style is substantially different than those of his successors. McTiernan is a master of escalating tension, although The Hunt for Red October doesn’t show it as well as Die Hard. The movie personalizes the global crisis sufficiently for the audience to have a deeper rooting interest than in whether or not World War III breaks out. 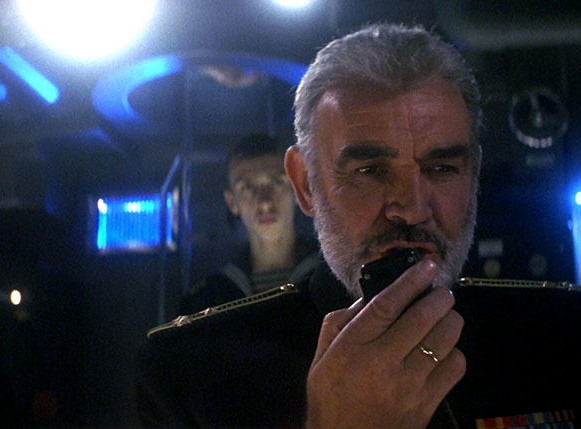 The Hunt for Red October is a complex novel. It is therefore somewhat amazing that the screenwriters were able to distill the essence of the book into a 135-minute movie without butchering it. The film is well-paced and avoids getting bogged down in details. It sidesteps minutia unless those elements are necessary to advance the plot or elucidate details about the characters. Aside from some gunplay in the last act, there’s not much in the way of traditional action.

Post-World War II, there have been many movies about submarine warfare. The most successful of these, Wolfgang Petersen’s Das Boot, is an exhausting, white-knuckle affair that set the gold standard for undersea battles. Although there is some sub-to-sub combat in The Hunt for Red October, it’s treated as one of many plot elements and McTiernan doesn’t take the time or effort to set things up the way Petersen did. There’s no sense of claustrophobia and the dangers of suffocation, drowning, or being crushed are minimized. That’s because in every other submarine movie, the fate of the boat is central to the story. In The Hunt for Red October, it’s a secondary concern. This isn’t really a submarine movie; it’s a movie about late-era Cold War political maneuvering.

The story, which is set in 1984 to allow events to transpire before the collapse of the Soviet Union, postulates that the USSR has developed a prototype Typhoon class sub fitted with a new drive that allows it to run silently, making it virtually undetectable and, as such, an obvious first strike weapon. The boat, named Red October, is commanded by respected submarine captain Marko Ramius on its maiden voyage. Unbeknownst to his superiors, Ramius plans to defect and most of the officers on board are co-conspirators. While at sea, Ramius kills the Red October’s political officer, Ivan Putin (Peter Firth), before engaging the caterpillar drive and causing the sub to “disappear.” 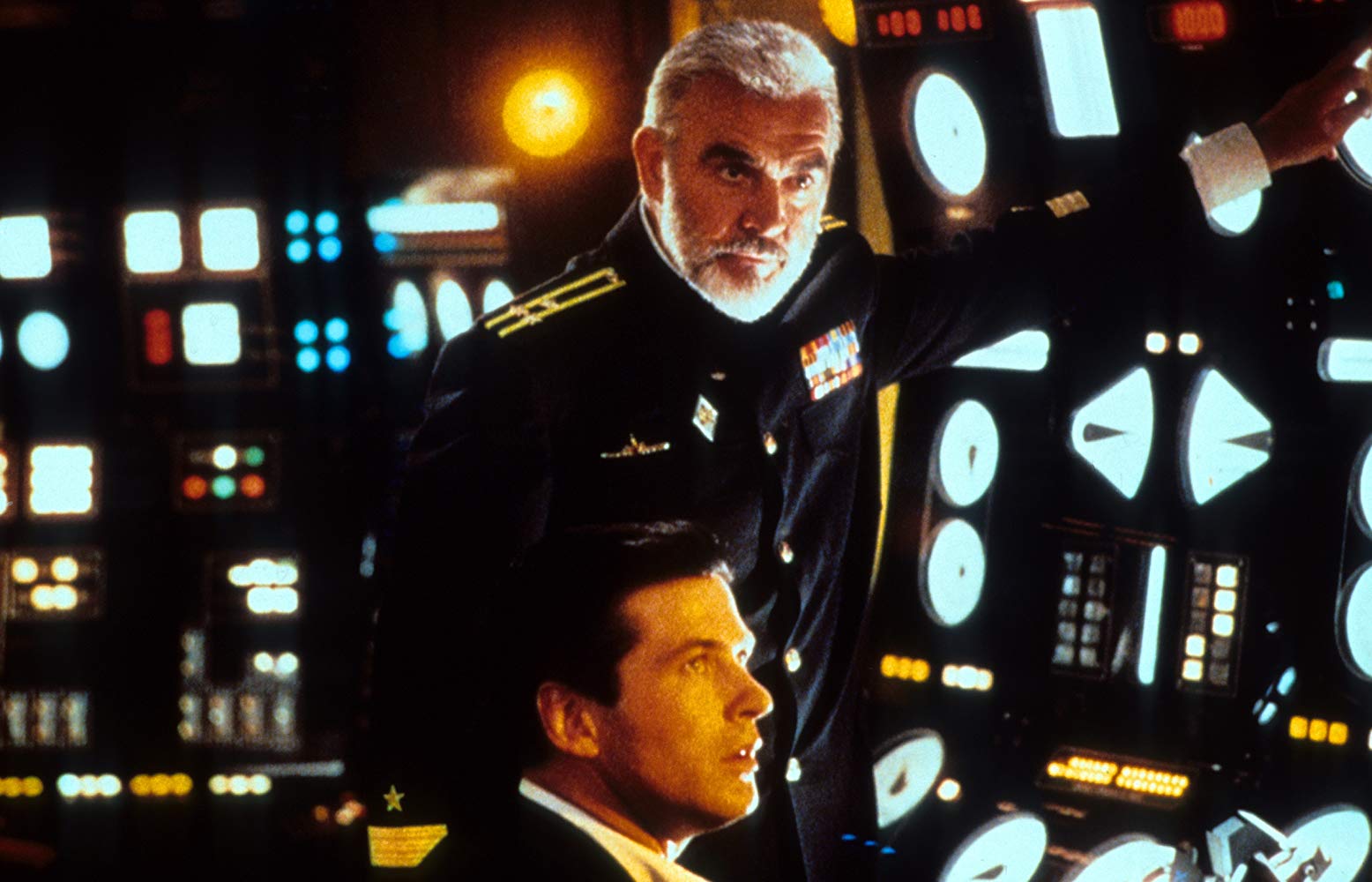 Meanwhile, CIA analyst Jack Ryan identifies the danger posed by Red October but also intuits, based on how the Soviet Navy is reacting to the sub’s disappearance, that Ramius may be trying to defect. After winning the support of his boss, Admiral Greer (James Earl Jones), Ryan must convince other members of the chain of command. Eventually, he is permitted to board the Los Angeles class sub Dallas, commanded by Bart Mancuso (Scott Glenn), with the understanding that if he can’t make contact with Ramius within three days, the U.S. Navy will sink Red October. With the clock ticking, Dallas must first locate Red October then figure out how to “talk” to its captain – all the while with the entire Soviet fleet intending to destroy the rogue submarine.

The Hunt for Red October features an A-list (male) cast. The unquestioned “draw” was Connery, who had settled nicely into his post-007 life. Just three years beyond wining an Oscar for The Untouchables, Connery had starred in both Indiana Jones and the Last Crusade and The Presidio and had not yet entered the slide that would lead to his quitting the industry in disgust. Even though The Hunt for Red October is now recognized as the first of the “Jack Ryan series,” it is very much Connery’s film. This is especially true because Alec Baldwin, the wet-around-the-ears actor chosen to play Ryan, is neither charismatic nor convincing. Baldwin shows none of the intensity that would define his star-making performances in such films as Prelude to a Kiss and Glengarry Glen Ross. The supporting cast is comprised of veteran characters actors Scott Glenn, Sam Neill (as Ramius’ confidante and second-in-command), James Earl Jones, Richard Jordan (as the American National Security Advisor), Joss Ackland (as a top Soviet diplomat), Tim Curry (as the Red October’s doctor), Courtney B. Vance (as the Dallas’ sonar operator), and Stellan Skarsgard (as Captain Tupolev, the commander of another Soviet sub). 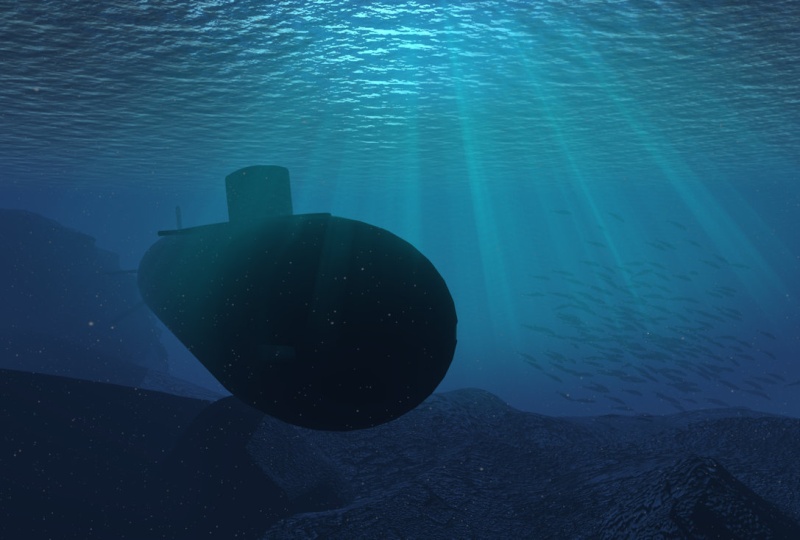 McTiernan uses an unusual visual device to address the problem of making a major Hollywood movie in which a third of the dialogue is in Russian. For a little while, it appears he might attempt the unlikely and subtitle all of Sean Connery’s lines. However, early in the film, during a scene between Connery and Peter Firth, he has the camera zoom in on Firth’s mouth as he is speaking in Russian. When Firth says “Armageddon” (which is the same word in English and Russian), the camera begins pulling back and, from that point on, all of the “Russian” dialogue is spoken in English. This is McTiernan’s way of telling us that even though the characters are still speaking in their native language, he’s going to “translate” for us without subtitles.

Although The Hunt for Red October wasn’t Sean Connery’s final film (he would go on to make more than a dozen other movies before retiring in 2003), it could be considered his last great role (some would argue that was in Finding Forrester; others might suggest The Rock). To an extent, The Hunt for Red October was a victim of unfortunate timing. During its initial box office run, the collapse of the Soviet Union robbed it of a sense of immediacy. Nevertheless, the mix of traditional thriller elements, Cold War storytelling, and submarine warfare generate sufficient tension to engage the viewer throughout. Coupled with Connery’s magnetic performance, that’s enough to make The Hunt for Red October as watchable today as it was during its 1990 release.