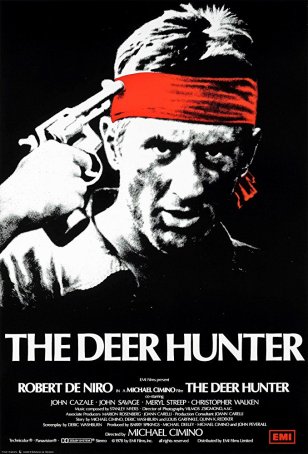 Of the four major Vietnam war films made in the dozen years following the fall of Saigon, The Deer Hunter was the first and, in the minds of some critics, the best. (The other three being Apocalypse Now, Full Metal Jacket, and Platoon.) However, while it’s fair to argue that The Deer Hunter contains moments of brilliance, the film as a whole is undone by its length. Sluggishly pacing, especially during the first act, and a general unevenness prevents The Deer Hunter from attaining greatness, even though many of the individual performances could be so labeled.

For director Michael Cimino, The Deer Hunter represented his career’s pinnacle. Awash in hubris as a result of the film’s reception at the 1979 Oscars, he embarked on a disastrous project that would sink his future and nearly bankrupt United Artists. Heaven’s Gate may not have been the worst movie ever made but it’s among the worst high profile, mainstream duds, standing in a circle of infamy reserved for only a few cinematic disasters. In retrospect, some of Heaven’s Gate’s flaws are evident in The Deer Hunter – none more so than the director’s penchant for self-indulgence. 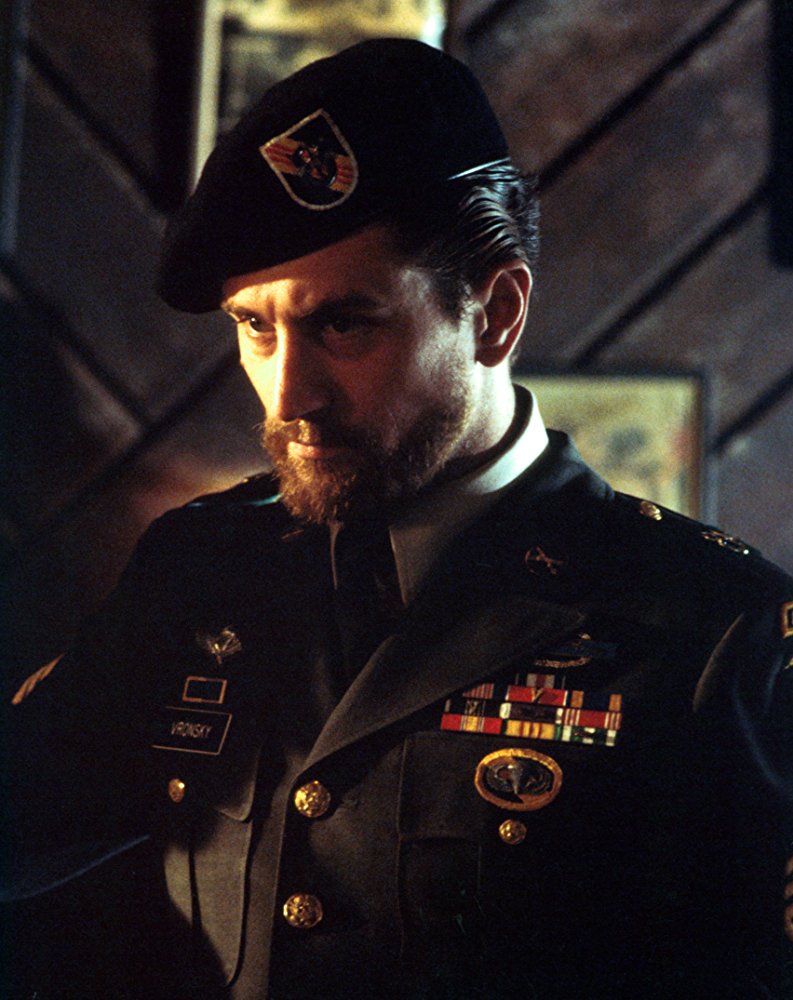 The Deer Hunter unfolds in three acts. The first establishes the main trio – Mike Vronsky (Robert De Niro), Nick Chevotarevich (Christopher Walken), and Steven Pushkov (John Savage) – in the context of their everyday world. They’re steel workers in steel country – Clairton, Pennsylvania, to be precise. The year is 1967 and the three have enlisted to serve their country. They view their upcoming trip to Vietnam with more excitement than trepidation, having bought into the macho recruiting lines. The film catches up with them at Steven’s wedding and introduces several minor characters who will reappear in Act III. They include Steven’s new bride, Angela (Rutanya Alda); Nick’s girlfriend, Linda (Meryl Streep); and three other locals: Stan (John Cazale, in his final performance), John (George Dzunda), and Axel (Chuck Aspegren).

The second act, which is shorter than the Pennsylvania segments that bookend it, chronicles the tribulations of Mike, Nick, and Steven in Vietnam. After being captured, they are kept in poor conditions, physically abused, and psychologically tortured. Seeing a game of Russian Roulette as a possible means of escape, Mike goads Nick into playing and, although both men survive and are able to overpower their captors, Nick’s mind is pushed past the breaking point. The three are separated during their daring river flight. 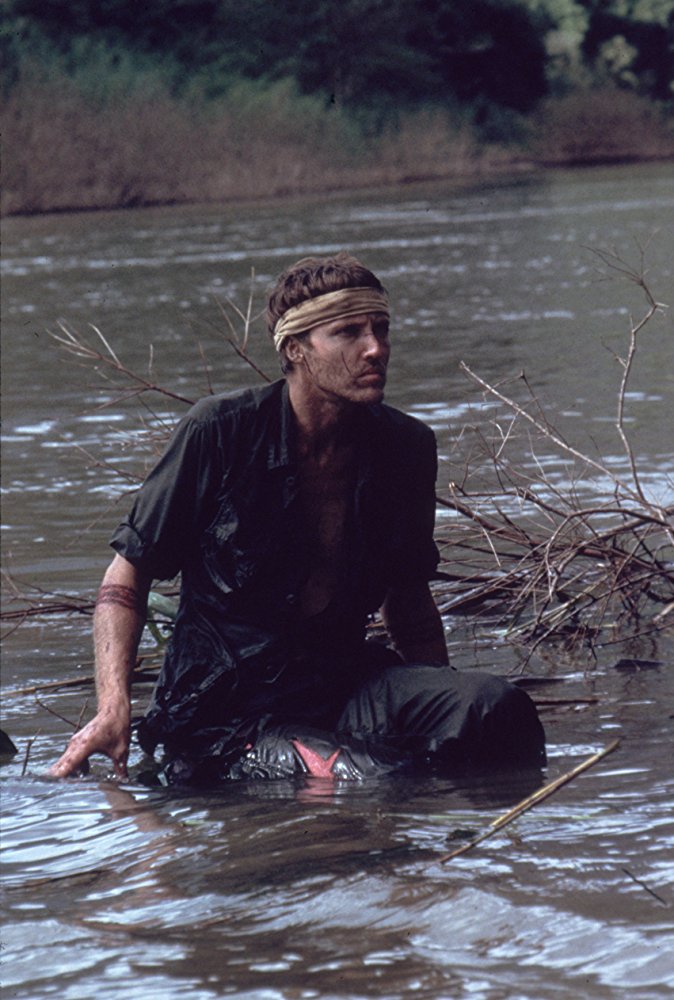 The film’s third chapter focuses on the return home. Aware of how much he has changed (while all that he left behind remains the same), Mike avoids a celebratory party and instead reveals himself quietly to Linda. Despite being outwardly the same, Mike’s psyche has been scrambled. His previous passion, deer hunting, no longer gives him pleasure. He can’t shoot the deer. When he learns that Steven survived (with both legs amputated), he visits him in the hospital. Later, when he gets a line on Nick, he returns to Vietnam only to discover that his friend no longer recognizes him or any aspect of his previous life. The movie ends with a funeral followed by a solemn rendition of “God Bless America.”

The principal flaw in The Deer Hunter is evident early during the proceedings. The opening segment, designed to introduce the characters and provide a strong flavor of their culture, goes on for far too long. The interminable wedding is seemingly presented in real-time and creates a sense of impatience in viewers. The flabby, unfocused beginning to the film gives way to the riveting Vietnam sequences, which include the infamous Russian Roulette tournament, which offers powerful, intense performances by De Niro and Walken (the latter winning an Oscar). Criticisms have been leveled against Cimino for his soulless, one-dimensional portrayal of the Viet Cong, but I don’t find those arguments compelling. The Deer Hunter is presented from the perspective of the three Americans and, as most POWs attest, their captors weren’t humane toward them. Cimino had no responsibility to present three-dimensional Vietnamese characters or show that Americans committed atrocities as well. Those are beyond the scope of his film. 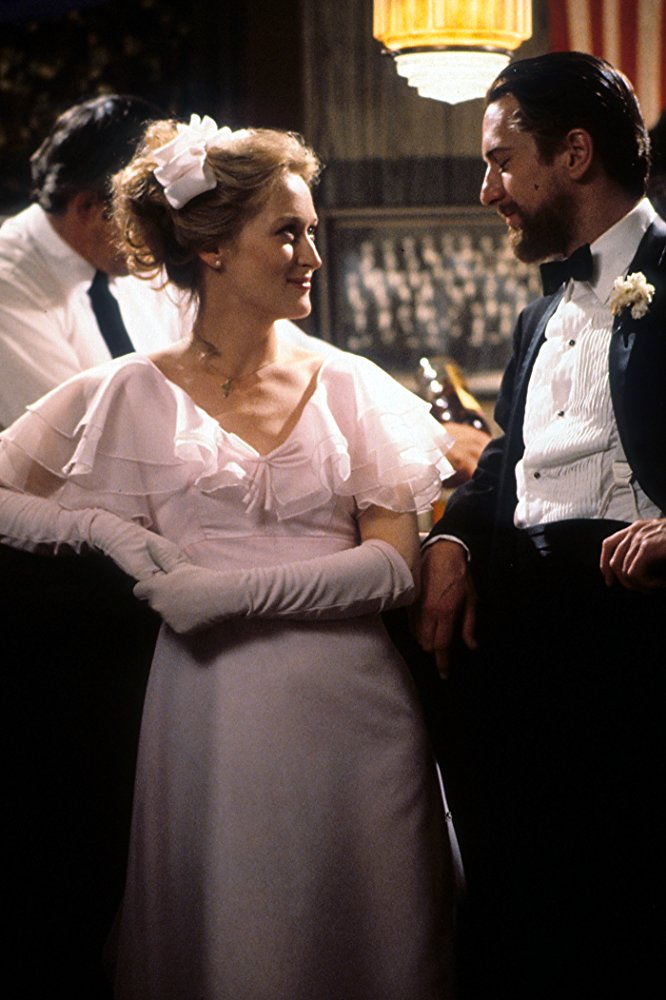 The third act addresses a subject that was beginning to attract media attention around this time: the trauma associated with returning to the U.S. The Deer Hunter illustrates that no one who goes through a life-altering experience, no matter how “well-adjusted” he may seem, will ever be the same again. Only Linda seems to understand this and the fragile bond she develops with Mike is more one of mutual comfort than romantic love.

The Deer Hunter earned three well-deserved acting nominations. De Niro, at the height of his career, gives a powerhouse performance. For the actor, The Deer Hunter came just before Raging Bull, for which he won his first (and thus far only) Lead Actor Oscar. Christopher Walken, not well known at the time, matches De Niro scene-for-scene and, because he competed in the less competitive Supporting Actor category, he was able to take home a statue. For Meryl Streep, this represented her first of many Oscar nominations. It’s a credit to her ability that she is able to do so much with what is, at least on the surface, a generic role. Streep’s off-screen lover at the time, John Cazale (best known as Fredo in The Godfather films), was dying of cancer during The Deer Hunter’s filming; there are several scenes in which he is noticeably unwell.

The passage of time has dimmed The Deer Hunter’s luster. One reason for the contemporaneous praise was the timeliness of the subject matter (the Vietnam war having ended only four years prior to its general release). The film’s openness regarding veterans’ issues made it daring, with its only high profile companion in that area being Coming Home. Watching the movie today, the flaws that were ignored at the time are evident. (Not everyone missed them in 1978. The late Andrew Sarris called the production “massively vague, tediously elliptical.”) The Deer Hunter contains moments – even stretches – of greatness but as a whole, it falls short of the bar that was later achieved by Full Metal Jacket and especially Platoon.