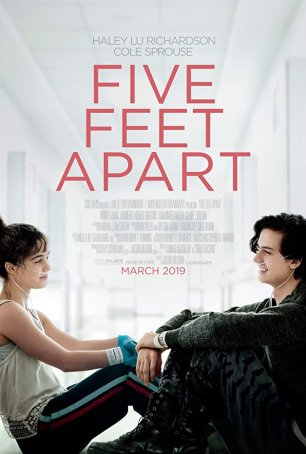 In the grand tradition of The Fault in Our Stars and Me and Earl and the Dying Girl comes Five Feet Apart, the latest movie to argue that just because someone is suffering from a mortal illness doesn’t mean they can’t fall in love. This is by no means an exhaustive list of similar titles – the subject has become popular in recent years. Then again, a linkage between death and romance has been common in literature and art through the years. Unlike most of these tearjerkers, however, Five Feet Apart isn’t an adaptation of a hot YA property, even though it may feel like that’s the case. The original screenplay is credited to Mikki Daughtry and Tobias Iaconis and displays a strong knowledge of how to boost Kleenex sales.

The problem with Five Feet Apart isn’t the emotional manipulation – that quality is mandatory for melodramas of this sort – but the clumsy way in which the movie orchestrates its third act. After steering things smoothly through difficult territory, freshman director Justin Baldoni veers off-course. Perhaps concerned that the first two-thirds of the film, which explores the simmering romance between two critically ill teenagers, is too talky and slow-moving, the filmmakers introduce a series of “shock” developments that undermine the previously modulated tone and intelligence of the screenplay. It’s almost as if someone took an effective indie production about what it means to live in the shadow of death and grafted on a Hollywood climax. Stella (Haley Lu Richardson), Five Feet Apart’s spunky protagonist, is suffering from cystic fibrosis. She is in the hospital for what she calls a “tune-up,” but she recognizes the harsh truth: without a lung transplant, her days are limited. Also being treated in the same hospital are Poe (Moises Arias), a young man she has known since they were seven, and newcomer Will (Cole Sprouse), a CF patient with a poor prognosis whose experimental drug regimen isn’t working. Will is a dark, brooding risk-taker who would agree with the mantra “live fast, die young, and leave a beautiful corpse.” In his case, because of a series of scars from past operations, maybe the corpse won’t be so beautiful.

Of course, Stella and Will fall in love. That doesn’t count as a spoiler, since there wouldn’t be much of a movie if that didn’t happen. But there’s a major stumbling block to a physical relationship. Although CF patients can be intimate with unafflicted people, they can’t be intimate with one another lest an exchange of saliva accelerate and complicate their illness. The rule-of-thumb is that they must remain six feet apart (shortened by Stella to “five feet apart” as a means of cheating the disease that has cheated her of so many things). So they can whisper sweet nothings, philosophize about life and death and what (if anything) lies beyond, and watch each other remove their clothing. But they can’t touch. And they certainly can’t kiss. 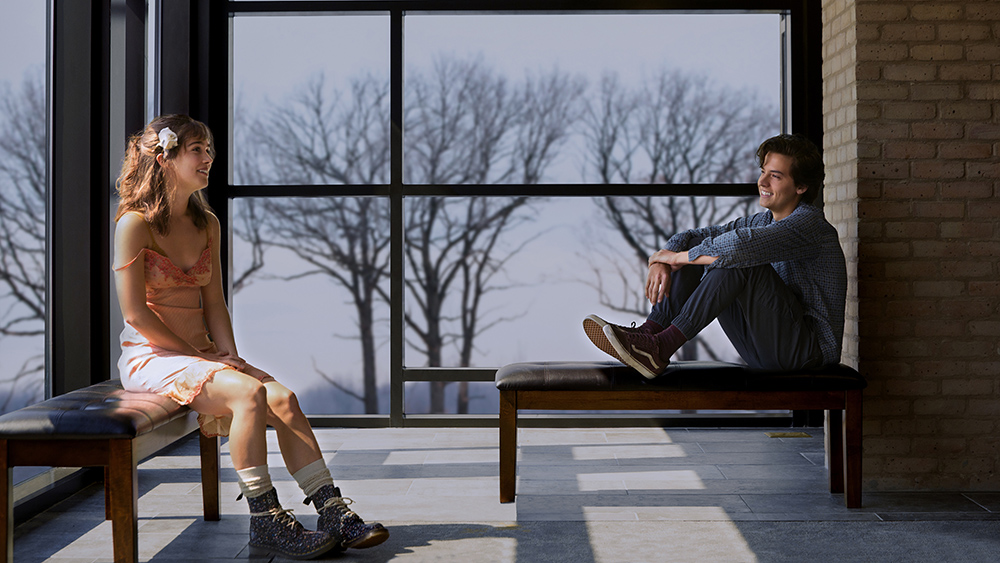 Chemistry is a critical component of Five Feet Apart and actors Haley Lu Richardson and Cole Sprouse exhibit enough to ignite the love affair. They are able to convey their deepening affection without benefit of any direct physical interaction. We feel the sexual tension and its associated frustration as they deny themselves the closeness that would offer release of both an immediate and permanent sort. Richardson and Sprouse fall into the category of “up-and-coming” young performers. Richardson’s dance card is starting to fill up with roles in Split, The Edge of Seventeen, and Support the Girls. Sprouse has found a home as Jughead in the TV series Riverdale. The pair’s interaction is strong, although Richardson’s light burns a little more brightly.

Five Feet Apart’s final half-hour is disappointing and frustrating – and it has nothing to do with the eventual fates of the characters or their romance. What’s bothersome is that, after spending nearly 90 minutes of meticulously developing a sensitive, honest relationship between two ships passing in the night, the movie takes a turn into the ridiculous. We care about these characters. We’re invested in their lives even though we known that one or both of them aren’t likely to make it to the end credits. To interject a series of unnecessary narrative complications in the movie’s twilight hurts the film’s credibility and diminishes the potency of the final scenes.

For those in need of a good cry, Five Feet Apart will fill the need but, even amidst the sniffles and tears, there’s a sense that the experience could have been more wrenching and emotionally honest had the filmmakers showed a greater trust in their material and audience.