I Wanna Dance with Somebody (United States, 2022) 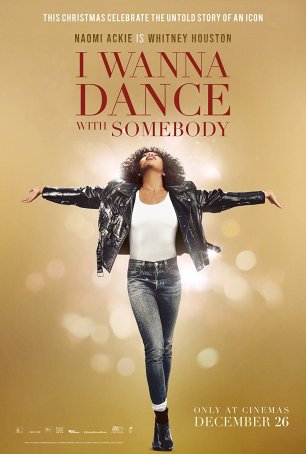 I Wanna Dance with Somebody (full title: Whitney Houston: I Wanna Dance with Somebody) is as generic a musical bio-pic as one is likely to find. A by-the-numbers, slightly fictionalized chronicle of the rise and fall of pop singer Whitney Houston (Naomie Ackie), the film struggles to find a reason to exist beyond providing fans with an opportunity to listen to some of her most popular songs. Saddled with an unimaginative screenplay by Bohemian Rhapsody writer Anthony McCarten, there’s not much director Kasi Lemmons can do to bring Houston to life. Instead, she’s confined to recreating moments while her lead actress gives a performance that’s more imitation than innovation.

McCarten appears to have taken his Bohemian Rhapsody template and tweaked it to fit Houston’s life. The movie is linear and follows a trajectory that offers no surprises to anyone who lived through the majority of Houston’s public career. There’s also a sense that characters have been softened and made more agreeable, which is what can happen when so many of their real-life counterparts are still alive. It’s almost as if Bobby Brown, Cissy Houston, Clive Davis, and Robyn Crawford had to sign off on the screenplay before it was allowed to proceed. 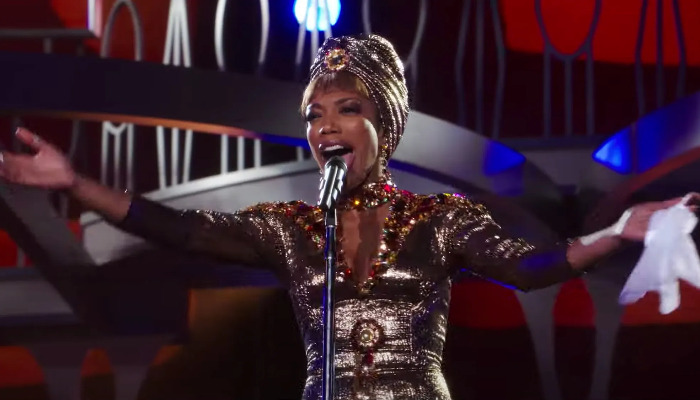 The story is constructed like a bell curve, with the first half providing a sketchy overview of Houston’s rise to fame while the second half shows her decline and death. The first hour is considerably better than the second one. Most of the music, including the songs that form the backbone of the singer’s legacy, occur during that portion. The second hour, which prioritizes drama over tunes, is a familiar-but-depressing account of Houston’s publicized slide into drug abuse, domestic discord, and irrelevance. The lack of depth prevents this aspect from having more than a cursory impact, however. One wonders whether the movie would have worked better had it stopped in 1994 and served as a celebration of Houston’s early career.

The best parts of I Wanna Dance with Somebody are the musical re-creations. (That doesn’t qualify as an especially astute observation.) Actress Naomie Ackie, who looks enough like Houston to pass for her, gamely lip-syncs to the original vocals. What’s disappointing, however, is the lack of coverage. Few of Houston’s songs are presented in full (those with the most complete renditions are the title number and her massive hit from The Bodyguard, “I Will Always Love You”) with a few only getting name-checked or represented by short snippets. In much the same way that McCarten’s script for Bohemian Rhapsody put a re-creation of Queen’s iconic Live Aid show at the end of that movie, Houston’s memorable 1994 AMA performance is lifted out of chronological order and placed just before the end credits. 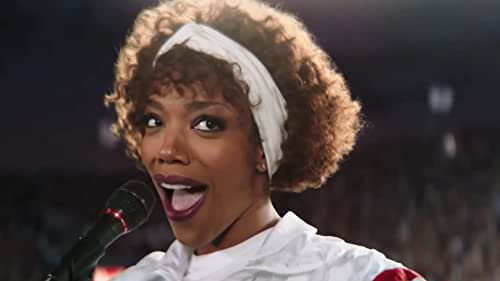 Based on her work in I Wanna Dance with Somebody, it’s difficult to determine whether Naomie Ackie is a good actress. The majority of her performance consists of her mimicking Houston’s body language, lip-syncing to her songs, and imitating her public image. It’s an excellent example of re-creating but doesn’t leave much room for real acting. Stanley Tucci presents Clive Davis as a Teddy Bear who always has Whitney’s best interests at heart. Ashton Sanders’ Bobby Brown is a bad boy with a good heart who still loves Whitney when she dumps him (any instances of alleged physical abuse are not to be found). The only somewhat villainous person in the movie is Whitney’s father, John (played with unsmiling sternness by Clarke Peters) – who happens to be dead in real-life and is therefore not around to contest his portrayal.

Of the spate of recent bio-pics featuring musical stars, this is one of the worst, if not the worst. That has nothing to do with the subject (although Houston’s life was less interesting than that of Elton John, Elvis, or Aretha Franklin) or her impact on history and everything to do with the hum-drum nature of this overlong, undercooked production. Even though I Wanna Dance with Somebody clocks in at nearly 2 ½ hours, there’s a sense that a lot may have been cut out (which would explain some of the ugly transitions and bizarre entrances and exists of certain characters) – an argument that a more interesting, less straightforward approach might have benefitted the project. For those with interest in Houston’s life, a documentary will do a better job. Fort those seized by the nostalgic desire to re-hear her music, there’s YouTube. I Wanna Dance with Somebody fills no niche because it doesn’t do anything especially well.

I Wanna Dance with Somebody (United States, 2022)