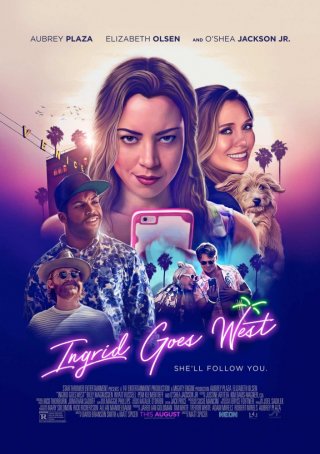 When it became mainstream in the late 1990s, the Internet fundamentally changed the way human beings communicated. E-mail replaced phone calls and letters as the primary means of long-distance communication. The social media revolution, which was born in the early years of the 21st century, further altered the landscape as texting and chatting and following and friending created new forms of interaction. As with every advance in technology, there’s dark side. The brighter the light, the deeper the shadow. Ingrid Goes West looks into that darkness and discovers that as much as social media may have enhanced communication, it has created a grotesque and disturbing subculture of people no longer capable of existing entirely in the real world.

Ingrid Goes West is part comedy, part tragedy, part horror/thriller, and part social commentary. Although it is primarily satirical, director/co-writer Matt Spicer never loses sight of the characters. Aspects of the story are preposterous but they are intentional exaggerations of real-world phenomenon and Spicer isn’t without compassion. The viewer senses that, as viciously as he skewers social media obsession, he’s sympathetic (at least to a degree) with those who become addicted to their smart phones and the need to be “friended” and “liked” as often as possible. For some people, those things have become the currency of their existence and are more important than dollars and cents.

Initially, it seems that Ingrid Goes West is headed in a Single White Female direction (a title explicitly referenced by a character later in the film). It opens with an unhinged Ingrid Thorburn (Aubrey Plaza) using pepper spray on an online “friend” who didn’t invite her to her wedding. At the outset, Ingrid is a creepy and thoroughly unlikable character and our discomfort with her as the protagonist grows when, following a stay in a mental institution, she moves to Los Angeles and begins stalking someone anew. Her latest “girl crush” is Taylor Sloane (Elizabeth Olsen) and Ingrid goes to extreme lengths to contrive a face-to-face meeting. As it turns out, Taylor is equally as artificial as Ingrid (although not as unbalanced) and things play out as expected. At some point, however, our attitude toward Ingrid softens as we get to see flashes of the tortured personality underneath the warped exterior. Meanwhile, Spicer’s tone drifts deeper and deeper into Heathers territory.

Aubrey Plaza, known primarily for her comedic work, is excellent as Ingrid. It would have been easy to portray the young woman as a caricature but Plaza imbues her with humanity while not shying away from displaying Ingrid’s antisocial, creepy characteristics. Elizabeth Olsen presents Taylor as an evolving individual. We see her not as she is but through Ingrid’s perception. As their friendship evolves (and later deteriorates), Olsen subtly changes the way she plays Taylor. The most grounded character in the film is Dan “Batman” Pinto, who is portrayed by O’Shea Jackson Jr. (Ice Cube’s son). Providing support are Wyatt Russell as Sloan’s ineffectual husband and Billy Magnussen as Sloan’s malicious brother, Nicky.

Although Spicer exaggerates some aspects of social media obsession, there are times when his seeming extremes aren’t far from reality. Too many people are incapable of functioning without a phone or tablet. Devices intended to enhance the human experience have instead hijacked it. Most normal people don’t stalk the way Ingrid does. They don’t kidnap dogs, damage trucks, take intrusive photographs, and buy houses to pursue their agendas. But applications like Facebook are custom-made for mild cyberstalking. Where and when is a line crossed? Ingrid Goes West doesn’t answer those questions but by posing them, it gets audiences to consider what they’re doing as they Tweet out reactions to the film.