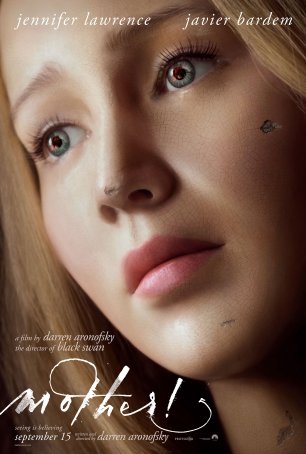 Kudos to Darren Aronofsky for having the courage to make this film. Kudos to Paramount Pictures for having the guts to open this wide rather than burying it or hiding it as a VOD release. It’s too bad it doesn’t work.

With mother!, Aronofsky seems determined to baffle, infuriate, and divide his audience. Because of its nature, there are those who will love the film and those who will hate it. It thumbs its nose at conventions and goes off the deep end, unapologetically wallowing in self-indulgence and directorial excess. It would be unfair to say the movie doesn’t make sense – it does, after a fashion – but the method of storytelling is where mother! will make friends and enemies. Aronofsky abandons conventional narrative techniques and basic logic in favor of a metaphorical approach that embraces the power of individual images even if they make no sense. 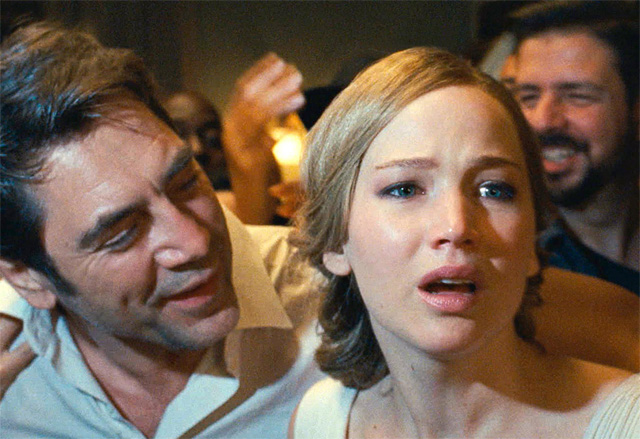 Exiting mother!, I was prepared to write that I hated it. But, after a few hours’ reflection, I have to admit that the movie stayed with me and it invites rumination and discussion. And, as I watched it, I was never bored and remained interested to the end, if only to see where Aronofsky would take things next and how it would all end up. In some ways, I felt about mother! the way I felt about David Lynch’s Twin Peaks: The Return. So, instead of going hard to one side or the other on the rating scale, I have come down in the middle.

None of the characters have names. Jennifer Lawrence plays a young wife wed to a narcissistic older author (Javier Bardem) who, despite having once written a great novel, is now afflicted with what seems to be a permanent writer’s block. The couple have moved into the author’s childhood home, which at some point was ravaged by a fire. The wife, a skilled interior decorator (and, it would seem, carpenter, mason, and plumber) has essentially rebuilt the palatial estate from its ashes. But it may be haunted. At least there’s some pernicious force at work.

One evening, a “doctor” (Ed Harris) arrives at the door, explaining that he mistakenly believed the house to be a B&B. The author invites him in and, ignoring his wife’s misgivings, invites him to spend the night. The doctor is afflicted by an awful cough but, the next morning, he seems okay. His wife (Michelle Pfeiffer) arrives soon after and the older couple makes themselves at home with the author’s blessing. Then, unexpectedly, the doctor’s sons arrive, quarreling over their father’s will. A fight ensues, one of the sons dies, and the author’s wife is left alone in the spooky house while everyone else goes to the hospital. 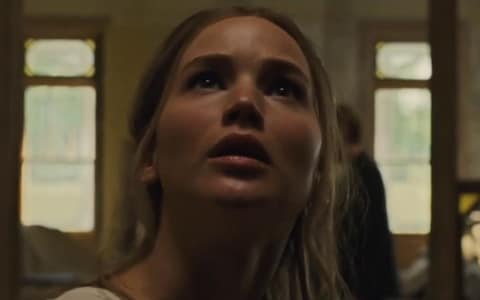 The first half of mother!, although not conventional by any means, gets by primarily on atmosphere and audacity. There are numerous extended takes and close-ups and these emphasize the sense of claustrophobia. The story’s excesses strain the bounds of credulity (as mourners inexplicably show up at the author’s house to offer their condolences to the doctor and his wife on the death of one son and the disappearance of the other) but don’t break it. That changes during Act II, when Aronofsky throws everything at the viewer including the kitchen sink. There are so many bizarre images that the movie becomes a kind-of cinematic Rorschach test – it can be whatever you want it to be. There’s violence, sex, dancing, feasting, quasi-religious rituals, and some of the most repugnant iconography imaginable. The climax is shockingly graphic and uncompromising, but the bleakness of that moment pales in comparison with the recursive aspect that follows.

This is one of the few times when I have felt that Jennifer Lawrence hasn’t been up to the acting task set before her. Admittedly, she doesn’t have an easy job, playing the one “normal” person in a crazy world but she too often recedes into the background. She lacks the force of personality to connect with the viewer – something that would have made the story more nightmarish and immediate, rather than just a collage of twisted episodes. Javier Bardem is perfect – suave, self-centered, oblivious, and ambiguous. We’re never quite sure about him, even after the curtain is pulled back. Ed Harris and Michelle Pfeiffer are equally good, with Pfeiffer in particular owning the scenes in which she appears. Later in the film, Kristin Wiig pops up in a small part.

Aronofsky’s career has been a study in risks, from the quirky Pi and the nihilistic Requiem for a Dream to The Fountain, The Wrestler, Black Swan, and Noah. mother!, however, makes the least accessible of those movies seem almost mainstream. Perhaps the key to appreciating mother! (not necessarily “liking” or “enjoying” it) is understanding that the last thing Aronofsky has in mind is providing easily-digestible, commercial fare. To that end, he indulges his ego too often and becomes myopic about his vision. mother! offers an experience – whether it’s a good one or a bad one will be very much in the eye of the beholder.