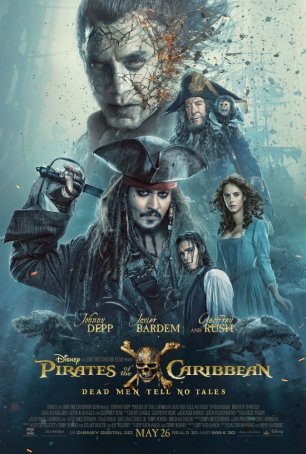 Dead Men Tell No Tales is the fifth entry into a veteran franchise that may finally have run out of both ideas and box office clout. Concerning the latter, this movie isn’t expected to do the same kind of business as any of the previous Pirates of the Caribbean films and, although it’s deserving of the “summer blockbuster” label until proven otherwise, there’s little indication that it’s among 2017’s most anticipated sequels. As to the former, the franchise has been regurgitating tropes, concepts, and plot points for several outings now, so there’s no reason to expect a change. At least this time around, screenwriter Jeff Nathanson and directors Joachim Ronning and Espen Sandberg have done a better job cobbling them together than was the case in either At World’s End (installment #3) or On Stranger Tides (installment #4). 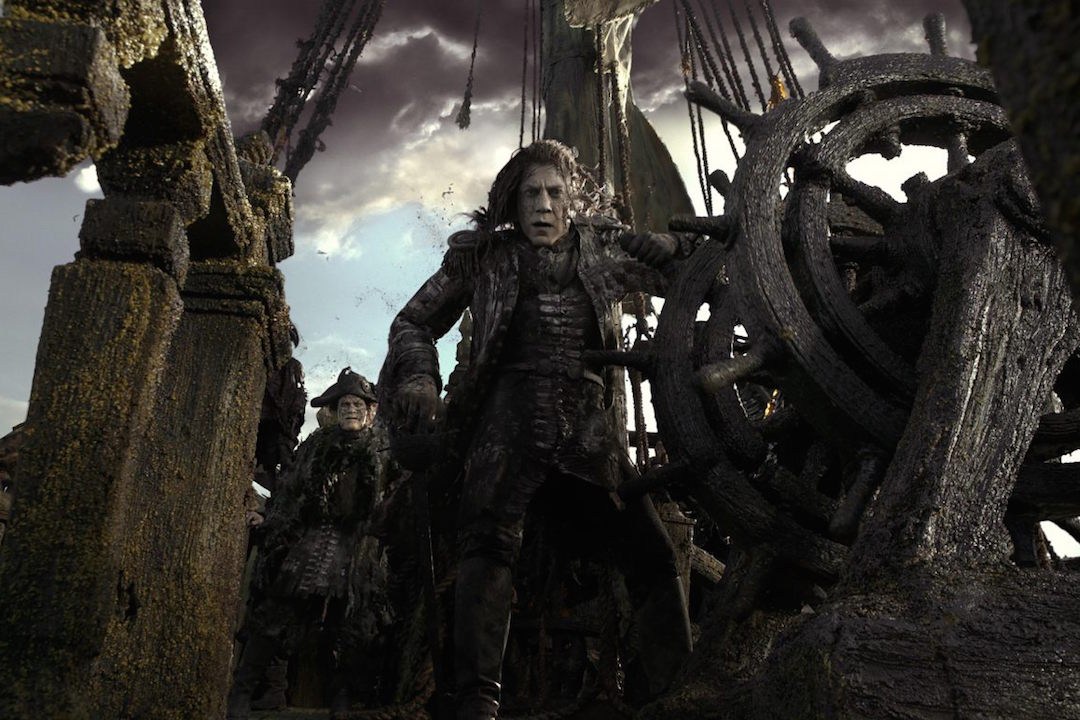 The reason for any erosion in the film’s fanbase is that Cap’n Jack Sparrow (Johnny Depp) isn’t the sleazily charismatic draw he once was. It’s a combination of things. The character, once a new, fresh addition to a stable of stuffy swashbucklers, has lost a fraction of his appeal with each appearance. The writing is no longer as crisp as it once was and Depp has resorted to mailing it in. Cap’n Jack has become a shadow of his former self, a waxwork dummy spitting out the obligatory one-liners while stumbling from one misadventure to the next. At least in Dead Men Tell No Tales, there’s a spark of life in the old man, but it says something that Cap’n Jack at his most interesting during a flashback sequence when he is digitally de-aged.

It didn’t become evident until On Stranger Tides how important Will Turner (Orlando Bloom) and Elizabeth Swann (Kiera Knightley) were to the series’ DNA. If the powers that be assumed Pirates of the Caribbean was all about Cap’n Jack, they were wrong. The straight man is always as important as the lunatic and the removal of Will and Elizabeth from the story left Cap’n Jack stumbling around (figuratively as well as literally). One of the best improvements made in Dead Men Tell No Tales is to restore the balance. The “new Will” is Will and Elizabeth’s son, Henry (Brenton Thwaites), and his plucky love interest is astronomer and horologist, Carina Smyth (Kaya Scodelario). The “old Will” makes an appearance (and, in fact, is the plot’s driver) and Elizabeth gets a last-scene-of-the-movie cameo. The quest in Dead Men Tell No Tales is to retrieve the Trident of Poseidon, a magical device that can impart power and remove curses. For the search, Cap’n Jack and his crew are joined by Henry, Carina, and the un-killable Barbossa (Geoffrey Rush). They are pursued by humorless naval officers and an unhappy ghost, Salazar (Javier Bardem), whose single-minded need for vengeance makes Khan’s obsession look like a distraction.

At 129 minutes, Dead Men Tell No Tales is the shortest of the Pirates of the Caribbean movies and it feels less bloated. There’s plenty of action, a lot of which is like live action Looney Tunes extracts (the runaway house, a date with a guillotine, waterskiing with dead sharks, etc.), and a few cliffhangers that are resolved in facile, unsatisfying fashions. The characters are likeable when they’re supposed to be likeable (Henry & Carina), buffoonish when they’re supposed to be buffoonish (Capn’ Jack, Barbossa), and frothing-at-the-mouth evil when they’re supposed to be frothing-at-the-mouth evil (Captain Salazar). The fifth movie sticks to the formula and delivers the third-most entertaining entry into the series, which is probably about the best one can hope for at this stage of its existence.

The movie tries to be more like The Curse of the Black Pearl than anything that followed it (of the sequels, only Dead Man’s Chest, was enjoyable start-to-finish), which is a good thing. Dead Men Tell No Tales veers away from Gore Verbinski’s growing penchant for self-indulgence and Rob Marshall’s fumbling. This is the first Hollywood feature for the Norse duo of Joachim Ronning and Espen Sandberg and it’s impressive for what it is. They show an aptitude for crafting spectacle, both in terms of choreographing action and incorporating massive quantities of CGI. Although this sequel is lacking when it comes to suspense, the humor is amped up. It’s a fair trade-off, although it pulls Pirates of the Caribbean a little away from the Indiana Jones-in-the-water template. 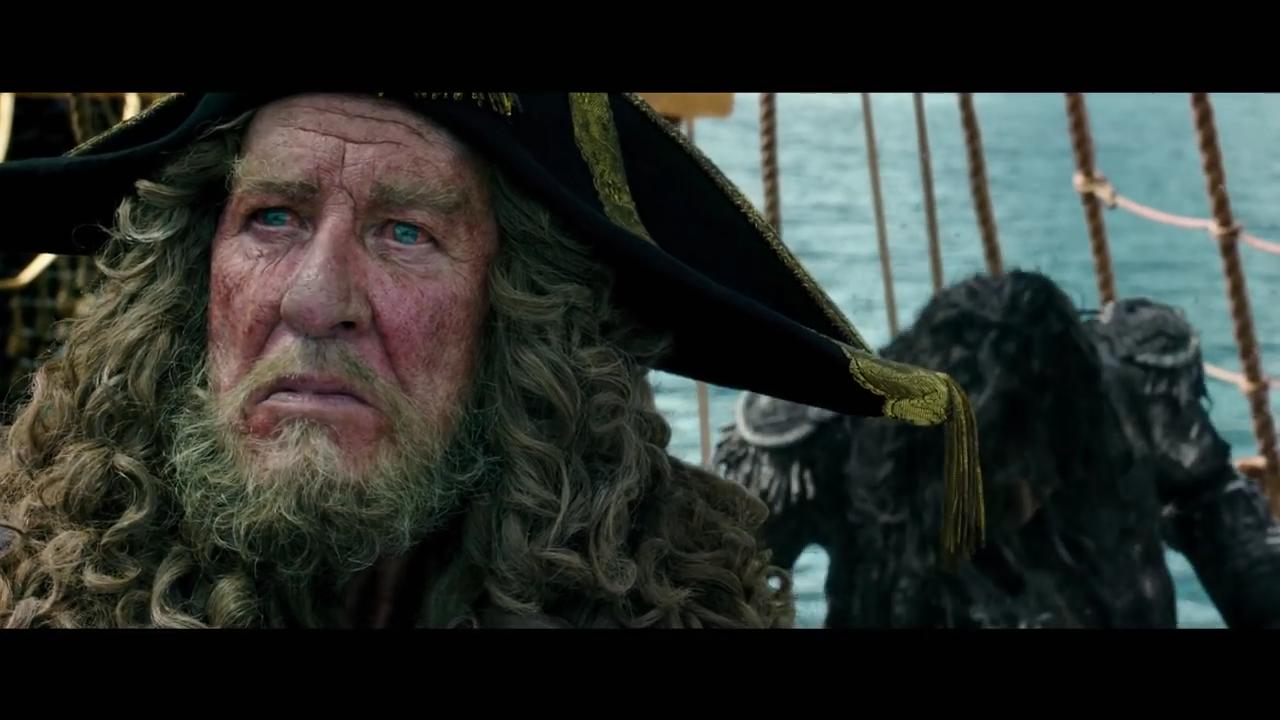 The franchise’s newcomers, Brenton Thwaites and Kaya Scodelario, acquit themselves admirably, capably holding their own opposite scene-hog Depp. Both have appeared in YA fare (Thwaites in The Giver and Scodelario in The Maze Runner) but this represents a step up in terms of international exposure. They mesh well together and Scodelario’s feistiness is an antidote to Depp’s too-laconic Cap’n Jack. Less enjoyable is Paul McCartney’s awkward once-scene turn as Jack’s uncle. Obviously, one rock legend isn’t enough for this franchise.

Dead Men Tell No Tales delivers although whether it delivers what 2017 audiences want is an open question. It’s fast paced but goes nowhere new and the film’s “bigness” makes it hard to remember what an amazingly unexpected treasure The Curse of the Black Pearl was. The movie cost so much money that Disney was never going to allow it to do anything original so it falls to the “wow!” factor to pack audiences in. But shock and awe, like Pirates of the Caribbean, isn’t what it once was. Call this an adequate but ultimately forgettable summer movie and move on to the next one…