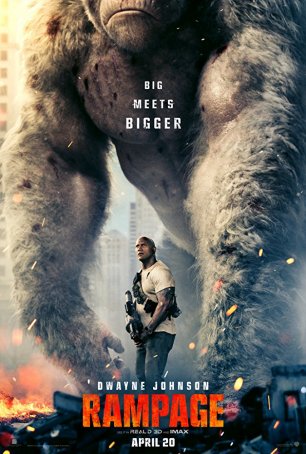 Technically, Rampage fits into the “based on a video game” category but, as with most products from the ‘70s and ‘80s (when games weren’t exactly narrative-based), significant changes were applied to make the concept viable for the big screen. The result, which owes more to ‘60s monster movies than its ‘80s arcade namesake, is a perfect vehicle for The Rock, assuming he’s trying to fashion himself into the Schwarzenegger of the 2010s. The movie may also provide us with a sneak peek at what filmmakers have in store for the big 2020 smackdown when we’ll get a new version of King Kong vs. Godzilla. If this is the case, there’s not much reason to get excited about the future production.

The problem with Rampage is that it’s not content to be mindless fun. There’s too much exposition and too many needless human villains. Plus, the tone is more lugubrious than the flippancy suggested by the trailers. Yes, Dwayne “The Rock” Johnson has a few one-liners and there are isolated bits of humor but the production often takes itself way too seriously, including one moment near the end where we are solemnly shown clips of survivors who owe their lives to… well, that would be telling. Most of Rampage’s first half is devoted to explanation. All the chit-chat serves two purposes: exposing the idiocy of the premise and threatening to put viewers to sleep. In fact, things don’t get really interesting until the 90-minute mark or, in other words, 15 minutes before the movie ends. Watched on Netflix, I could envision a lot of fast-forwarding – an option that sadly doesn’t exist in theaters. 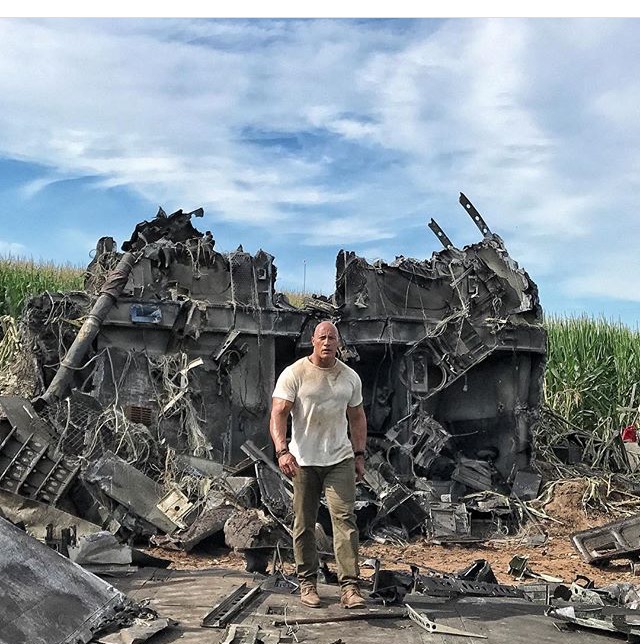 Much as I love King Kong, I’m growing bored of him. Okay, so the giant gorilla in Rampage is named George (not Kong) but a rose by any other name… George doesn’t start out big. When we first meet him in the care his misanthrope keeper, primate specialist and poacher killer Davis Okoye (Johnson), he’s seven feet tall and weighs 500 pounds. Then he has an unfortunate close encounter with the remnants of an exploded space station that contain a weaponized DNA splicer and suddenly he’s growing out of control while showing signs of uncontrolled aggression. He’s not the only one – also affected are a wolf in the Wyoming wilds and an alligator in the Everglades. News reports lead Dr. Kate Caldwell (Naomie Harris) to Davis’ San Diego locale. She’s the scientist who developed the formula that has resulted in the animals’ mutation. She claims it was misused by her former boss, Evil CEO (TM) Claire Wyden (Malin Akerman), who now intends to sell it on the black market to the highest bidder. She also suggests there may be an antidote. Around that time, George goes ape-shit and has to be tranquilized. Enter alphabet (FBI? CIA? OGA?) agent Russell (Jeffrey Dean Morgan), who relishes chewing on his lines and decides that taking George on a plane would be a good idea… Yeah, right. Of course, all this is merely a prologue to the disaster porn grudge match between the three monsters with Chicago standing in for Tokyo (where these things always used to take place). 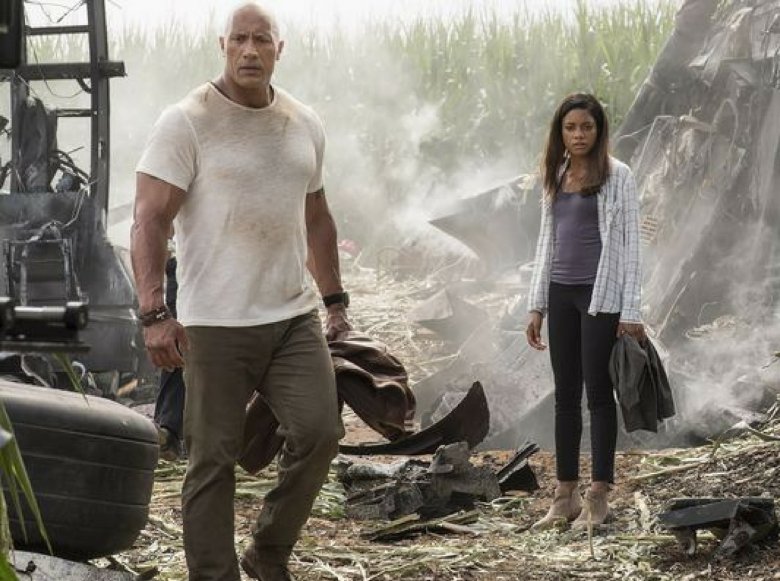 Sadly, Rampage isn’t a pleasant surprise. In fact, in the wake of Johnson’s hugely entertaining and profitable Jumanji, it’s a disappointment. Had it adopted a similar jokey, nudge-nudge-wink-wink tone, it might have worked. But if that was the filmmakers’ intention, only Jeffrey Dean Morgan and Malin Akerman seem to have gotten the memo. They play their roles like cartoons come to life. Unfortunately, Johnson and Naomie Harris are invested in fleshing out the nonsensical plot. I wish there had been a lot more wtf? moments like the one when Davis sees the giant wolf perform an aerial maneuver and he deadpans: “Of course the wolf flies.”

The creative team behind Rampage is comprised primarily of the people who made San Andreas with Johnson: director Brad Peyton, screenwriter Carlton Cuse, producers Beau Flynn and Hiram Garcia, editor Bob Ducsay, and composer Andrew Lockington. To their credit, they didn’t go ahead with a sequel to the 2015 natural disaster adventure but I’m not sure Rampage is an improvement. It takes the things that made San Andreas bankable - widespread carnage and epic catastrophe combined with Johnson’s biceps – and ups the ante by adding a King Kong-wannabe and a pair of ugly beasties. Ultimately, however, the film’s appeal is the same and the deadness between “money shots” is no less stultifying. The A-level special effects can’t elevate Rampage above its B-grade aspirations.