Does the fact that Tag is loosely based on a real story make it more enjoyable? Not really, although it illustrates the absurdity of some human endeavors. It’s a red herring designed to distract from an underlying truth about this movie: it is neither as funny nor as interesting as would be necessary to be one of the summer 2018’s pleasant surprises. It’s another comedy that falls prey to two common problems: (1) predictable, uninspired humor, and (2) inept attempts to inject drama into the proceedings during the last act.

Have filmmakers forgotten that audiences attend comedies for one reason: to laugh? Viewers don’t go to watch stale, sit-com level jokes recycled on the big screen. They can get that experience at home watching TV. They also don’t go to endure the vain attempts of ham-handed screenwriters to manipulate emotions and create a “dramatic moment” toward the climax in the pursuit of a feel-good ending. Tag has the potential to be a deliciously dark comedy but the filmmakers, starting with director Jeff Tomsic, never go there, continually skirting the darkness and playing it safe at every turn. The resulting generic comedy is more likely to generate boredom than laughter. It also wastes the combined talents of Ed Helms, Jon Hamm, Hannibal Buress, Isla Fisher, Jeremy Renner, and others.

I played tag when I was a kid. It was a great way to kill a few hours on a summer night, work up a sweat, and tear up the lawn as we circled endlessly around the house, trying to avoid the touch of the one who had been anointed as “it.” I was about 11 at the time. The oldest boy in our group was 15. At a guess, that’s the age when the men in Tag started – except they never stopped. Five friends – Hoagie (Helms), Callahan (Hamm), Randy (Jake Johnson), Sable (Buress), and Jerry (Renner) – began a tradition in boyhood that they have maintained through all the intervening years. Every May is “tag month” and, despite living in different cities, they travel all over in pursuit of passing on the “it” mantle to someone else. There are ground rules, but they can be amended. And touching is permitted in eleven out of twelve months. Four of the five are close but Jerry, who has never been tagged, remains aloof, isolated by his greatness. But, on the occasion of his wedding to Susan (Leslie Bibb), Jerry may be vulnerable. The others see opportunity. The hunt is on. 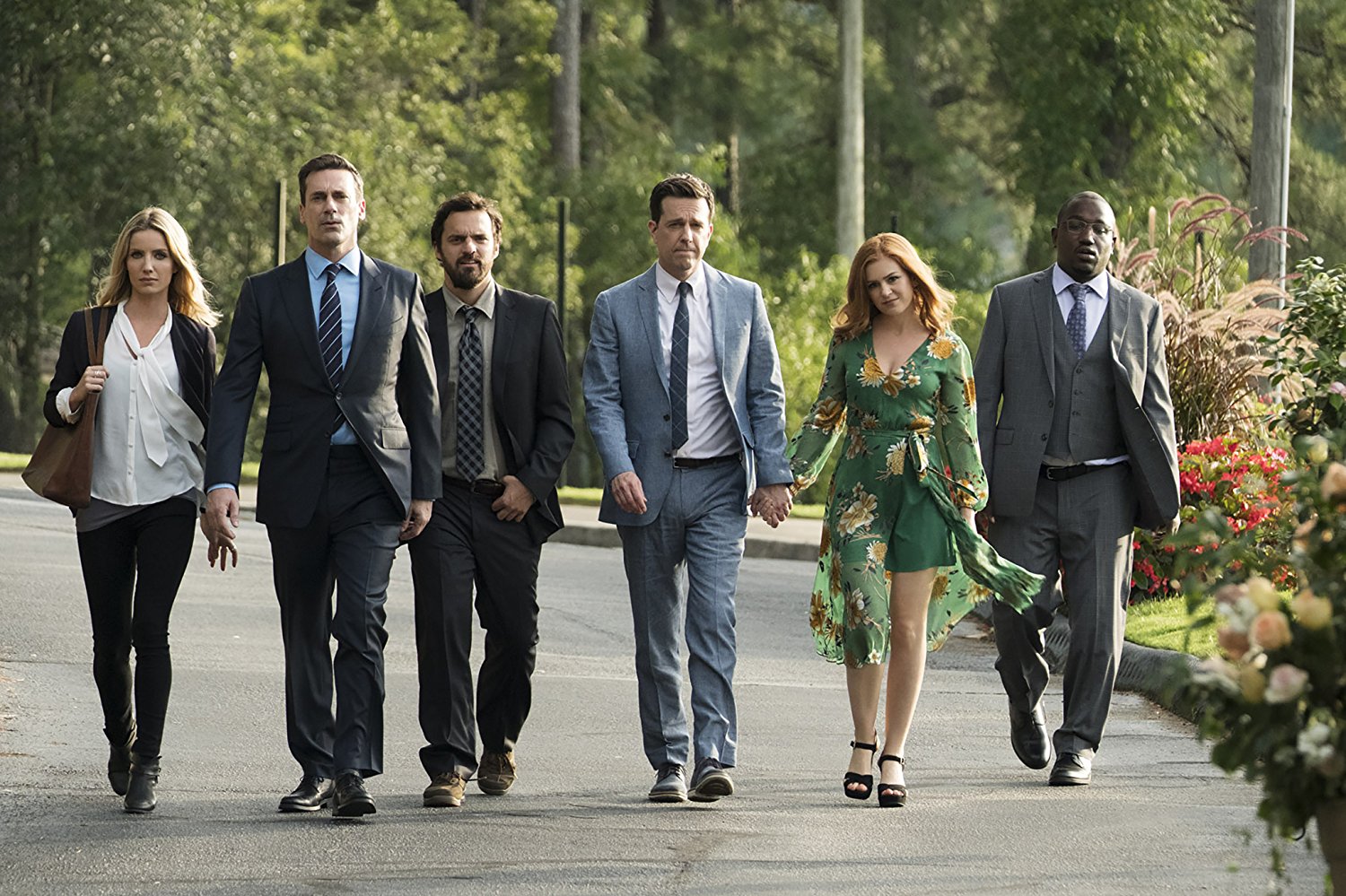 Although the early scenes in the movie aren’t funny, they establish a light tone that is eventually betrayed as things turn maudlin. They also promise a degree of delicious devilishness that the screenplay isn’t able to deliver. You can see what the movie is trying to do. The idea is to weave together all the various attempts to tag Jerry into a quilt of capers, with each one more convoluted than the last. Jerry, to avoid the ignominy of having his streak broken, is equally adept at constructing avoidances. Other movies have done this sort of thing with differing degrees of success (take Sleuth, for example) but it requires a deftness of screenwriting that appears to be beyond the skills of those involved in Tag.

The movie isn’t bad in the way that many failed films are bad. It’s simply inert (ironic for something with this title). It wastes time without giving much in return. The actors play to type. Ed Helms is the likeable ne’er-do-well. Isla Fisher, as his wife, falls victim to the assumption that the more often a woman curses, the funnier it is.  (If you think the concept of a woman dropping the f-bomb every other sentence is hilarious, you’ll be rolling on the floor through the popcorn and across the sticky spots.) Jon Hamm is suitably suave – he may never fully shake the Mad Men aura. Jeremy Renner is dark and cunning. Everyone plays a comfortable role, earning their paychecks.

Maybe I was seduced by the marketing into expecting something more entertaining from Tag than it ever would have been able to deliver. And maybe I’d didn’t laugh once because the only humorous lines and moments are in the trailer and have therefore lost their punch. Regardless, although sitting through the movie wasn’t painful, it was dispiriting. Tag is forgettable and will be forgotten. No matter how far and how fast the film’s creators run, they won’t be able to escape that reality. If you’re going to play on the summer playground, you’d better come with something more clever than this, and hiding behind the “based on a true story” caption isn’t going to work.