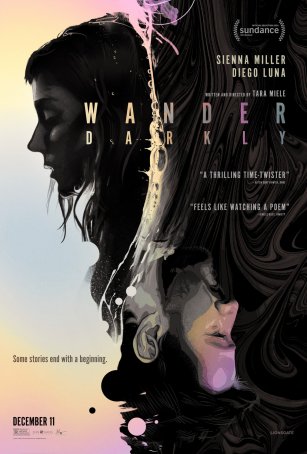 There are countless ways a motion picture can address themes of loss and grief. While one can at least give Tara Miele’s Wander Darkly props for trying something different, the film’s success is questionable at best. In trying to blend a Twilight Zone-ish mystery with a more conventional approach to sorrow and death, Miele crafts a story that is too artificial to work. In the end, when the “truth” is revealed, it’s a letdown, and that disappointment is a disservice to the story as a whole. It feels like the filmmakers have played unfairly, using sleight-of-hand in place of genuine emotional development. Although this sort of thing might work in a thriller, it feels grossly out-of-place in a production that seeks to wrestle with wrenching issues.

Is there a supernatural aspect to Wander Darkly? Without getting deep into spoilers, the best answer I can offer is “maybe.” The movie doesn’t provide clarity. Read one way, the outcome hints at a ghostly apparition. But it could also be a figment of a character’s imagination. Although such ambiguity could be considered unconventional or even daring, it doesn’t work here. That’s largely because of the clumsy manner in which this aspect of the movie is resolved. Three-quarters of the way through Wander Darkly, I felt like I had been subjected to a bait-and-switch scheme. 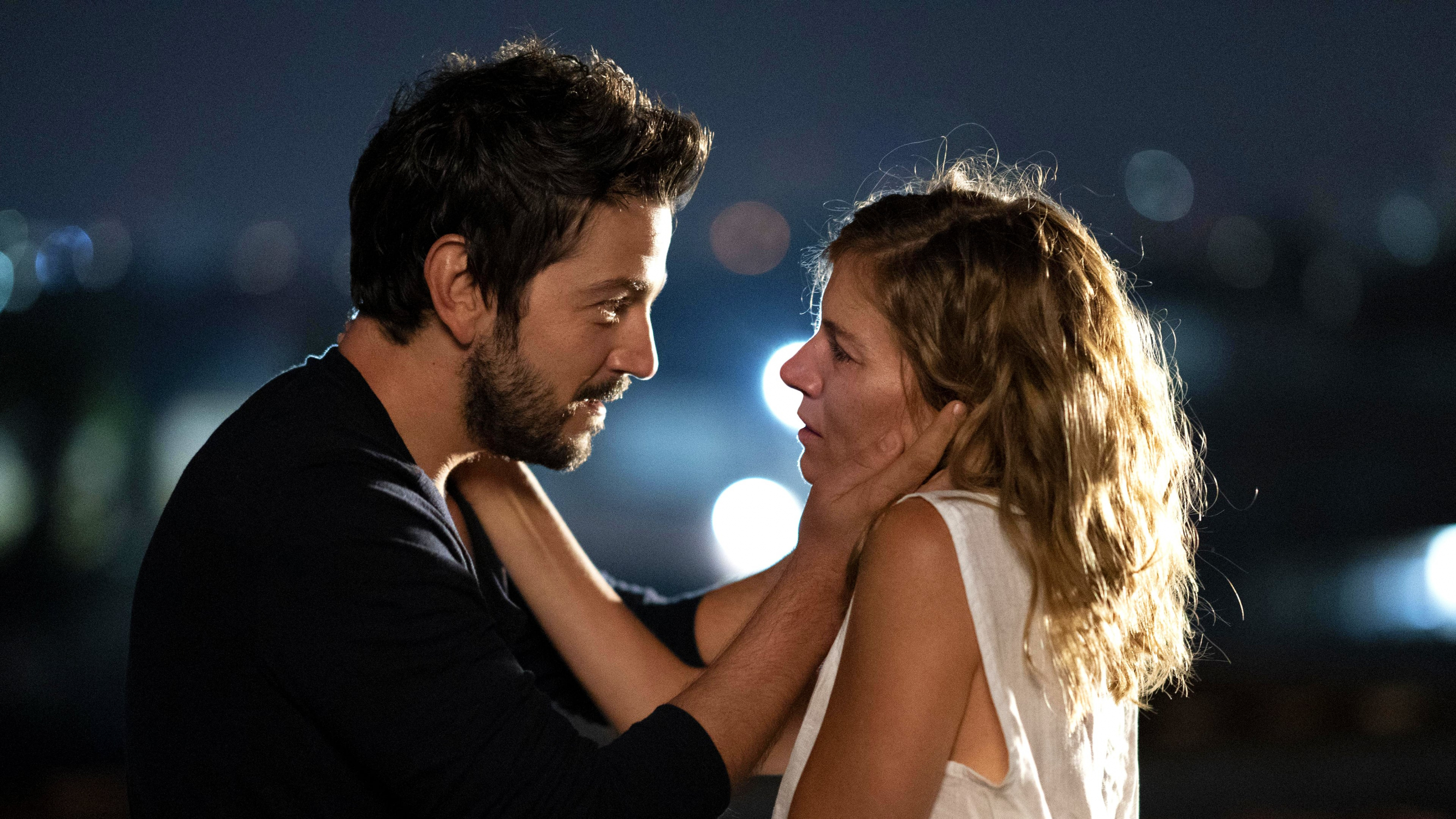 The movie introduces us to a couple, Adrienne (Sienna Miller) and Mateo (Diego Luna), who, although not married, might as well be. They have a young daughter and have recently purchased a house together. All is not well, however. In addition to the old thorn of the undisguised acrimony between Mateo and Adrienne’s mother, Patty (Beth Grant), there are new questions of infidelity. Adrienne suspects Mateo of being more than friendly with the flirty Shea (Aimee Carrero) and Mateo doesn’t trust his girlfriend’s supposedly platonic relationship with a suave client, Liam (Tory Kittles). None of that matters, however, after a head-on car crash brings life as the couple knows it to a halt.

When Adrienne awakens, she seems to be having an out-of-body experience. She sees her own corpse and, as it’s wheeled away to the morgue, she understandably believes she’s dead. Although no one else sees (or hears) her and she has a window into the future (spending a few moments checking in on her much-older daughter), Mateo is by her side and tries to convince her that she’s not really dead. He takes her on a journey through memories and possibilities, attempting to convince her that she has a future. Viewers, however, will recognize that the happy wedding (which inexplicably has Patty beaming at the joyful couple) isn’t what it seems to be. The manner in which Miele injects an element of reality would have been rejected by Agatha Christie as too convenient and contrived. 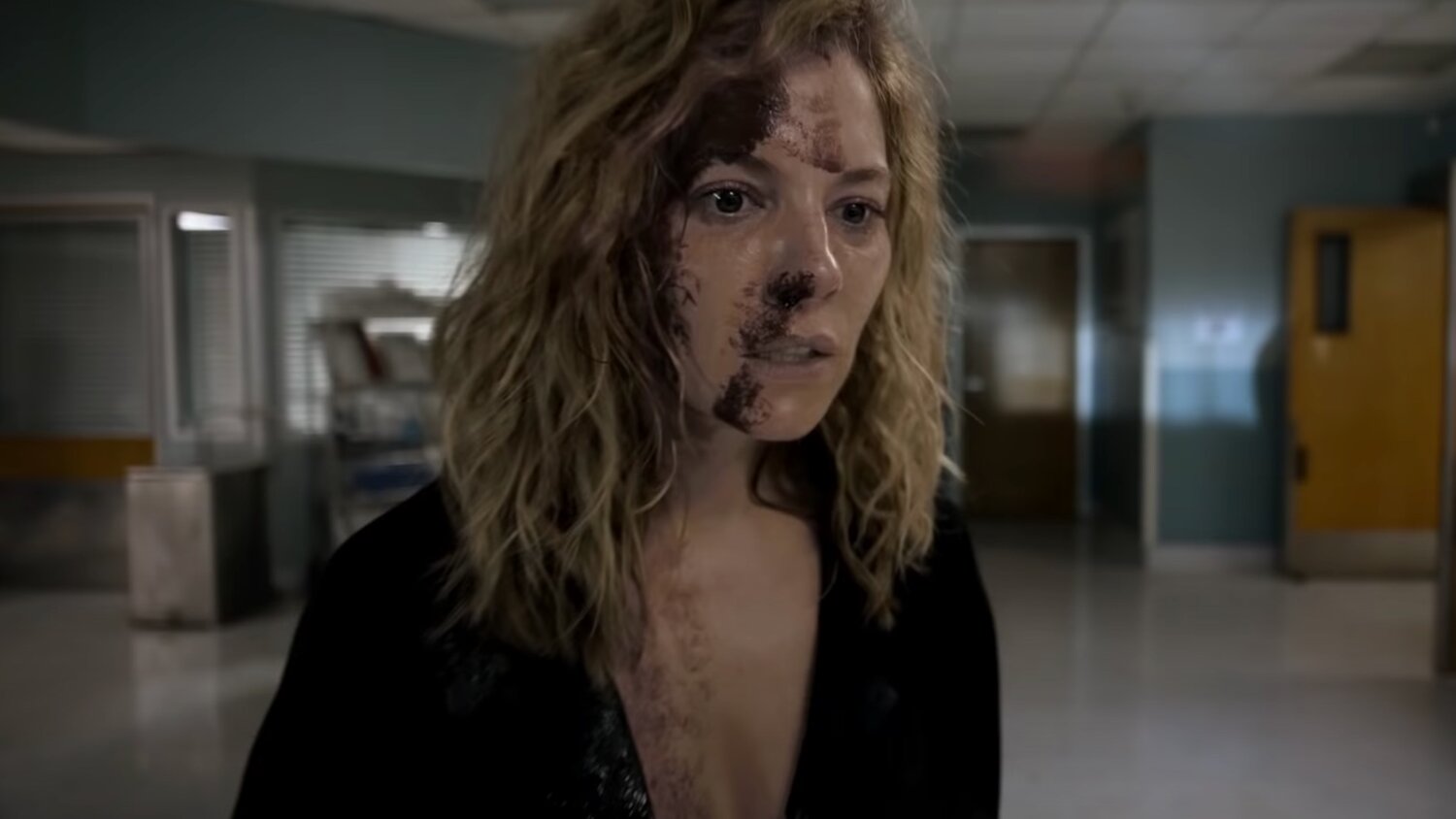 The performances are sometimes off-key, although that could be the result of the nature of the story. Movies that touch on Twilight Zone-inspired elements often require actors to create unnatural or surreal characters. Sienna Miller at times seems slightly over-the-top and Diego Luna has a tendency to underplay everything. Miller and Luna lack chemistry and the resulting absence of a connection between them diminishes the emotional impact.

The universality of grief means that a movie addressing it in a serious fashion has to do so with care and sensitivity. While I don’t doubt that Miele’s heart was in the right place when she wrote Wander Darkly, the resolution feels false and manipulative. (It probably doesn’t help that I watched this movie soon after seeing the far superior Piece of a Woman, which deals with similar subjects.) The movie’s “hook” is also its biggest problem. By turning this exploration of love and death into a mystery, Miele has hamstrung the production, transforming it from a serious drama into a something gimmicky. Those who guess what’s going on long before the “reveal” will be bored by the repetitive nature of the screenplay and those who remain in the dark (possibly due to inattentiveness – it’s not that hard to figure out the secret) are more likely to be disappointed than surprised by the twist.