Bill & Ted Face the Music is a love letter for fans of the cult classic films Bill & Ted’s Excellent Adventure and Bill & Ted’s Bogus Journey. Designed with die-hards in mind, the concluding chapter of the trilogy brings back a few friendly (and not so friendly) faces and takes matters to a higher level of inanity than what was seen in either of the two previous installments. This isn’t a good movie in the conventional sense of the word but it may hit the sweet spot for those who have declared their affection for the slacker musicians originated by Keanu Reeves and Alex Winter more than 30 years ago.

The film’s saving grace is that it is sometimes funny. Not consistently. Not outrageously. But there are a few laughs to be had. Because the plot is irrelevant, Bill & Ted Face the Music feels overlong even at a relatively svelte 90 minutes. It’s a series of skits featuring the dumb and dumber duo first traveling into the future then revisiting hell (for a reunion with their old friend, Death, again played by William Sadler with a nod to Ingmar Bergman). Their ultimate goal: write The Song That Makes the Whole World Sing (with apologies to Barry Manilow) and thereby save the universe. Or something like that. It doesn’t make a lick of sense but it doesn’t have to. If you want mind-bending and consistent time travel paradoxes, see Tenet. If you want to see something that embodies the sentiment of the song “I’m My Own Grandpa,” this is the perfect choice. 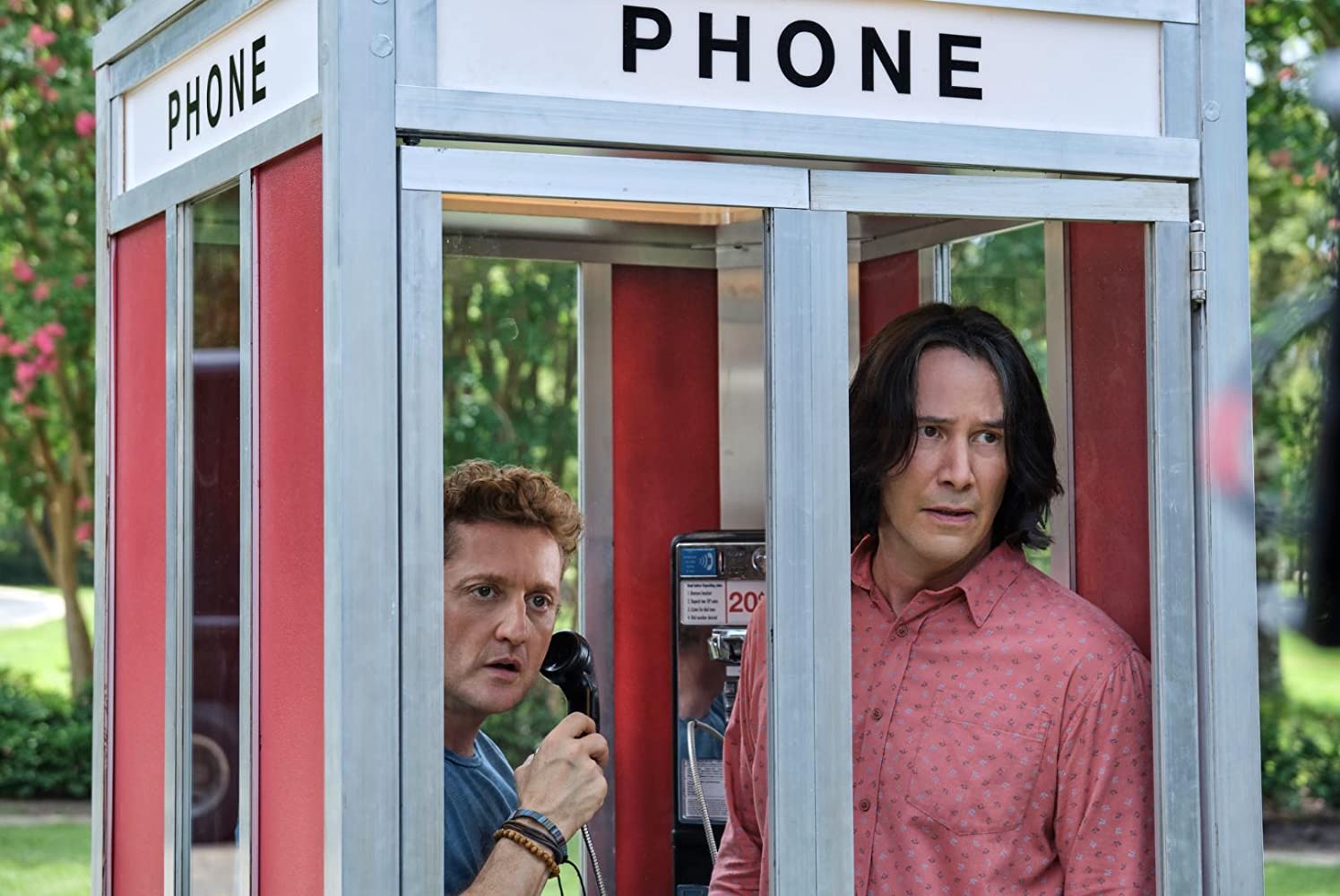 Bill & Ted Face the Music reintroduces us to characters who, like an insect in amber, haven’t changed a bit since we last encountered them in the early nineties. Since then, an entire generation of movie-goers has been born and grown up without a new Bill & Ted movie. Keanu Reeves is known to them as Neo or John Wick or the guy who never should have been let anywhere near a remake of The Day the Earth Stood Still. As for Alex Winter, I don’t think he’s done much of anything since Bill & Ted’s Bogus Journey. What’s more, although their characters have aged from being old enough to attend a prom to borderline-AARP eligibility, their wives (Princesses from the Middle Ages) haven’t aged a day (courtesy of recasting). They have daughters (played by Margo Robbie-lookalike and niece to Hugo, Samara Weaving, and Brigette Lundy-Paine) who are chips off the old blocks and appear to be about the same ages as their mothers. That’s the kind of thing that happens when you dabble in time travel.

George Carlin, who was an important part of the first two movies, was unable to appear in this installment due to a prior commitment. Undaunted, the filmmakers repurposed outtakes from one of the first two films to give him a cameo. (As posthumous appearances go, this is considerably more tasteful than what J.J. Abrams tried with Carrie Fisher in The Rise of Skywalker.) Rufus’ daughter, Kelly (named after Carlin’s real-life offspring and played by Kristen Schaal), fills his part, although the specifics of her role are somewhat nebulous. I guess she’s there to warn the intrepid duo that time is running out for them to write the universe-saving song and provide them with renewed access to the time-traveling telephone booth. (Once again, opportunities for a Doctor Who tie-in – or at least in-joke – are missed.) 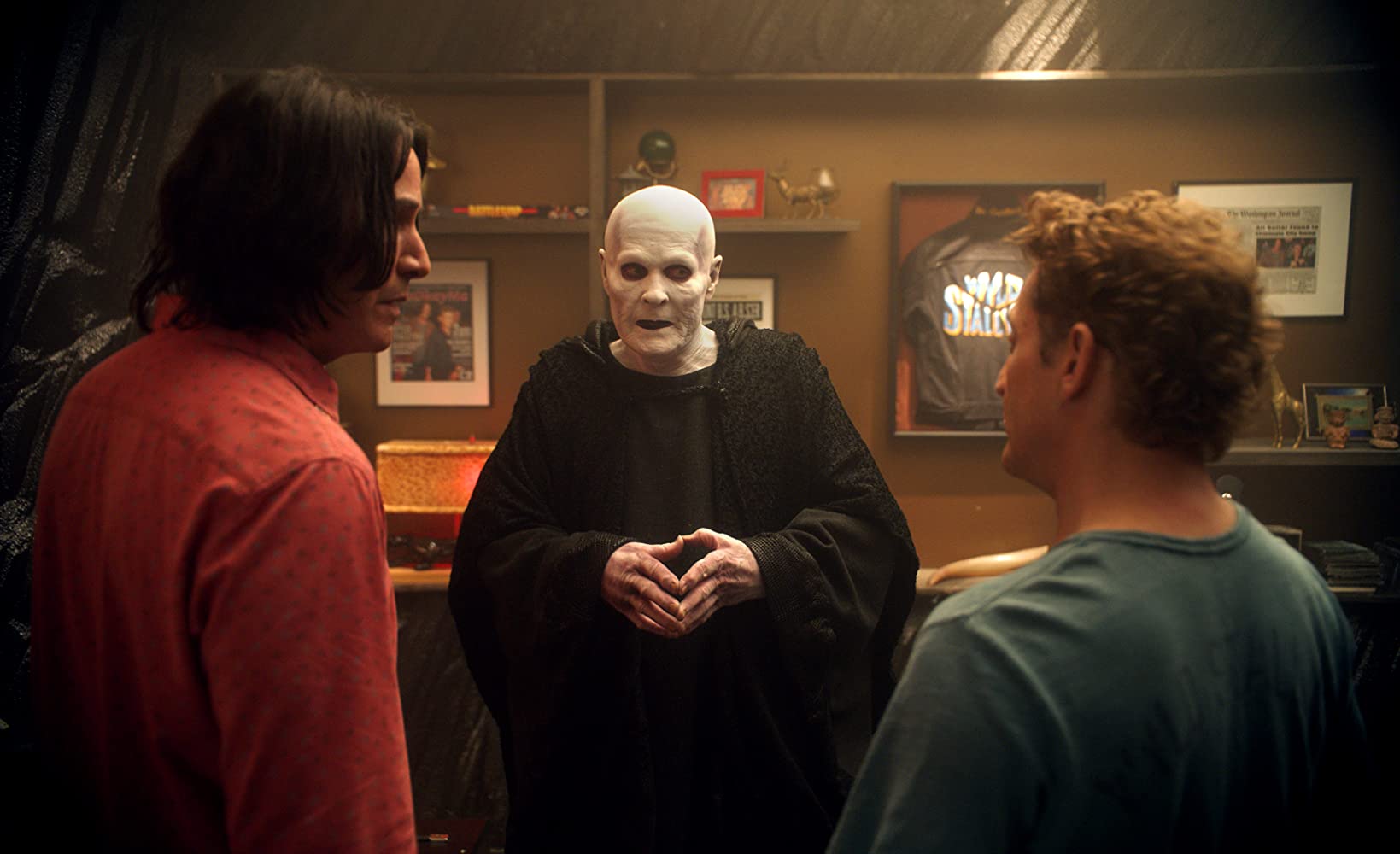 The marriage counseling segment is funny and there are few unpolished gems as Bill & Ted meet their future selves. But the movie runs out of steam well before the halfway point and, after that, it seems to be going through the motions, as if everyone involved was having too good a time to put the meandering narrative out of its misery.

Viewers are likely to get out of Bill & Ted Face the Music what they put into it. If you were raised believing that this duo represents the height of slacker comedy, then you probably won’t have any problem ignoring the movie’s relentless self-indulgence. If this is your first exposure to Bill & Ted, you might wish you were given a time machine to reverse a lost 90 minutes. Bill & Ted Face the Music is silly, dumb, and completely nonsensical – exactly what one could reasonably expect from the movie and what the fans (given a choice) would demand. Keanu Reeves might have once appeared in Shakespeare but it wasn’t as Ted.