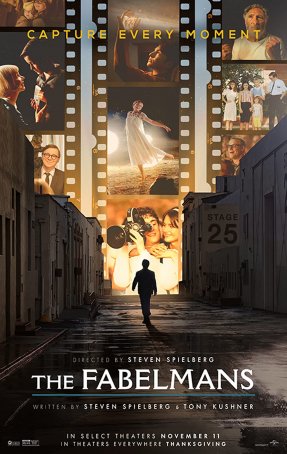 Over the course of a career that has spanned nearly 50 years, Steven Spielberg has often worked with children but this represents the first time he has attempted a coming-of-age story. What’s more, this isn’t any coming-of-age story, it’s rooted in the filmmaker’s youth, offering a nostalgia-tinged fictionalization of his adolescent and teenage years. Although there are moments of Spielbergian wonder and humor sprinkled throughout, this feels less like one of the director’s efforts than what one might expect from, say, Ron Howard, whose films tend to be crowd-pleasing but thematically light. The Fabelmans isn’t likely to go down as “Great Spielberg” or even “Very Good Spielberg” but it’s a warm, enjoyable plunge into the 1950s and 1960s. It’s also a window into not only how certain aspects of culture have changed but how those changes informed the growth of one of this generation’s most influential filmmakers. It’s no coincidence that Spielberg made this film shortly after the death of his parents (his mother died in 2017; his father in 2020). This is very much a Valentine to them both.

The Fabelmans is structured like a romantic comedy, except instead of chronicling the attraction between a boy and a girl, this movie tells the love story between a boy and the cinema. There’s the “meet cute” (which involves a trip to the theater to see The Greatest Show on Earth), the developing attachment, the break-up, and the grand reunion (as embodied by the making and exhibition of the high school film about Senior Ditch Day). The movie echoes Giuseppe Tornatore’s Cinema Paradiso, although Spielberg’s approach isn’t as openly poetic. 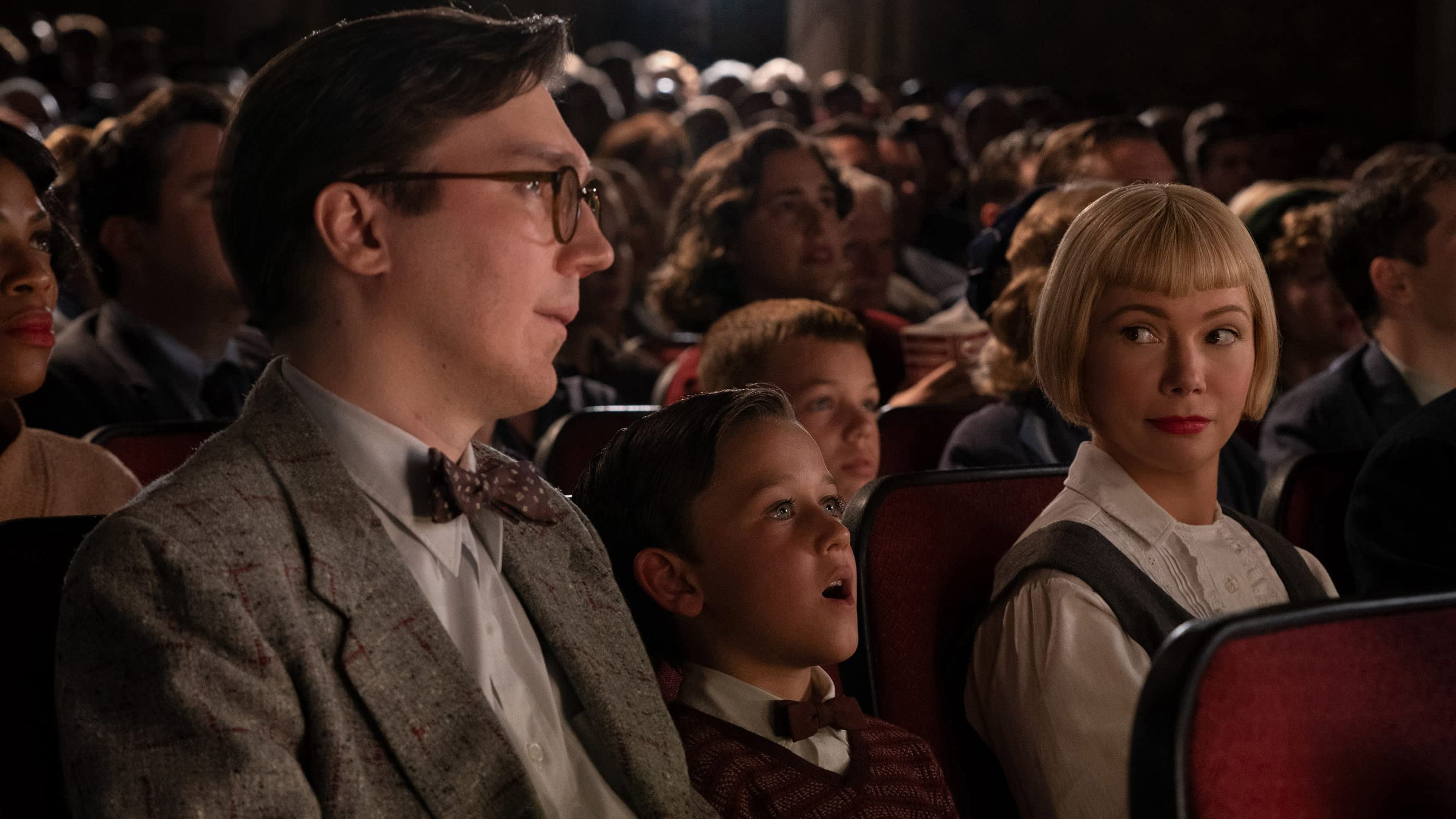 We know from interviews that the first film Steven Spielberg saw as a child was The Greatest Show on Earth, and the movie opens in 1952 with his alter-ego, five-year old Sammy Fabelman (Mateo Zoryon Francis-DeFord), accompanying his parents, engineer Burt (Paul Dano) and pianist Mitzi (Michelle Williams), to a theater to see the Cecil B. DeMille Oscar-winner. The night will forever change Sammy’s life. Although he is traumatized by the train wreck, his means of “therapy” is to recreate the scene in the basement of his New Jersey home using a Lionel trainset and film it using his father’s camera. This ignites his passion for making movies – something that accelerates once he and his family move to Phoenix. There, as he traverses the late 1950s and early 1960s (now played by Gabriel LaBelle), his techniques become more sophisticated and he’s making movies that outstrip what would be expected from a teenage boy.

The film’s second half, which re-locates Sammy and his family to Northern California, where Jews are a distinct minority, occasionally strays into John Hughes territory. Sammy acquires a girlfriend, Monica (Chloe East), through distinctly unusual circumstances. She’s out to save his soul but thinks he’s hot because he’s a member of the race that gave birth to Jesus. He encounters antisemitic bullies like the irredeemable Chad (Oakes Fegley) and the conflicted Logan (Sam Rechner). And, as the movie approaches the finish line, he has a face-to-face meeting with the great director John Ford (played by the great director David Lynch with a typical Lynchian flourish). 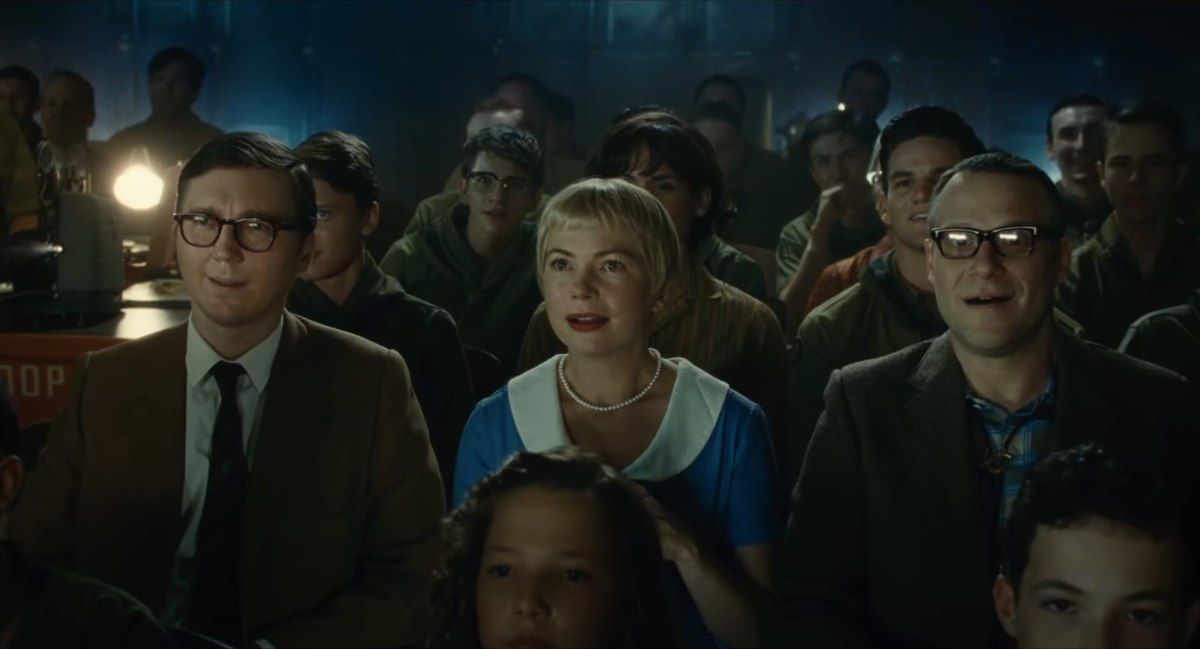 In choosing his actors, Spielberg opted for acting ability rather than recognition. The biggest name in the cast is Seth Rogen, who has a small but important role as a family friend, “Uncle” Bennie. Michelle Williams is almost unrecognizable as Mitzi, who fully supports Sammy’s artistic endeavors. Paul Dano plays Burt in a way that recalls the stereotypical engineer of the era (I could see shades of my grandfather in him). The lead, Gabriel LaBelle (a relative newcomer, although he has a few minor credits on his filmography), gives a lived-in performance, making this the second consecutive year that Spielberg has provided an opportunity to a largely unknown talent. (Rachel Zegler probably should have been accorded an Oscar nomination for West Side Story.)

Although it’s easy to argue against The Fabelmans as being too slight, I welcomed its general sense of optimism at a time when each news story is worse than the next and non-blockbuster movies seemingly seek to be as hard-hitting and depressing as possible. Spielberg has always had a knack for providing an antidote to the “blahs” and a balance to the release roster. The Fabelmans’ love of cinema may garner it some Oscar attention but the movie’s humanity is what captured my attention and kept me engaged for the full 150-minute running time.