If there’s one thing I have learned about Charlie Kaufman over the years, it’s that he’s a much better screenwriter than director. Collaborating with the likes of Spike Jonze (Being John Malkovich) and Michel Gondry (Eternal Sunshine of the Spotless Mind), he shared responsibility for two of the most amazingly offbeat films of the late ‘90s/early 2000s. Left to his own devices, however, he churned out the tiresome and baffling Synecdoche, New York. That was followed by Anomalisa, which I described this way in my review: “About 30 minutes of this movie is brilliant… Unfortunately, the film’s other two-thirds is less impressive - at times unremarkable, at times weird, and at times tedious.” Now, following a five-year break and without anyone to rein him in (Netflix prides itself on giving talented filmmakers carte blanche), Kaufman once again reminds us that, without a Jonze or a Gondry to shape and prune the writer’s constructs, we’re destined to become stuck in a frustrating morass of eccentricity and self-indulgence.

In I’m Thinking of Ending Things, Kaufman drags a bad relationship into The Twilight Zone. The result is confusing and unpalatable and made worse by the lack of resolution. The movie brings the viewer along for the ride by developing a mystery that deepens with every slip in time and challenge to memory. Who’s that old janitor who seems to be watching (or remembering) from afar? Why are characters changing names and professions from scene-to-scene? How is it that someone is 50 at one moment and 80 the next? That doesn’t even address various personality disorders and a rather unappetizing story about pigs being eaten alive by maggots. And, if you’ve never seen John Cassevetes’ A Woman Under the Influence, I’d suggest watching that before checking out I’m Thinking of Ending Things. At least it will make comprehensible the seven-minute discourse about the pros and cons of Gena Rowlands’ performance.

The film opens with a boyfriend and girlfriend driving through a snowstorm on the way to meet his parents. The narrative – such that it is – is presented from her perspective (which is unreliable) and, as a result, we are privy to her inner monologue. That’s how we learn that the title, I’m Thinking of Ending Things, isn’t about suicide but a decision to end her six-week relationship with Jake (Jesse Plemons), the guy behind the wheel. It’s not hard to understand why she (Jessie Buckley) – who is referred to as “Young Woman” or one of several names (Lucy, Amy, etc.) – is with him in the first place. He’s dour, unpleasant, and far too curmudgeonly for one so young (I don’t think he ever smiles during the course of the movie’s 135-minute running time). 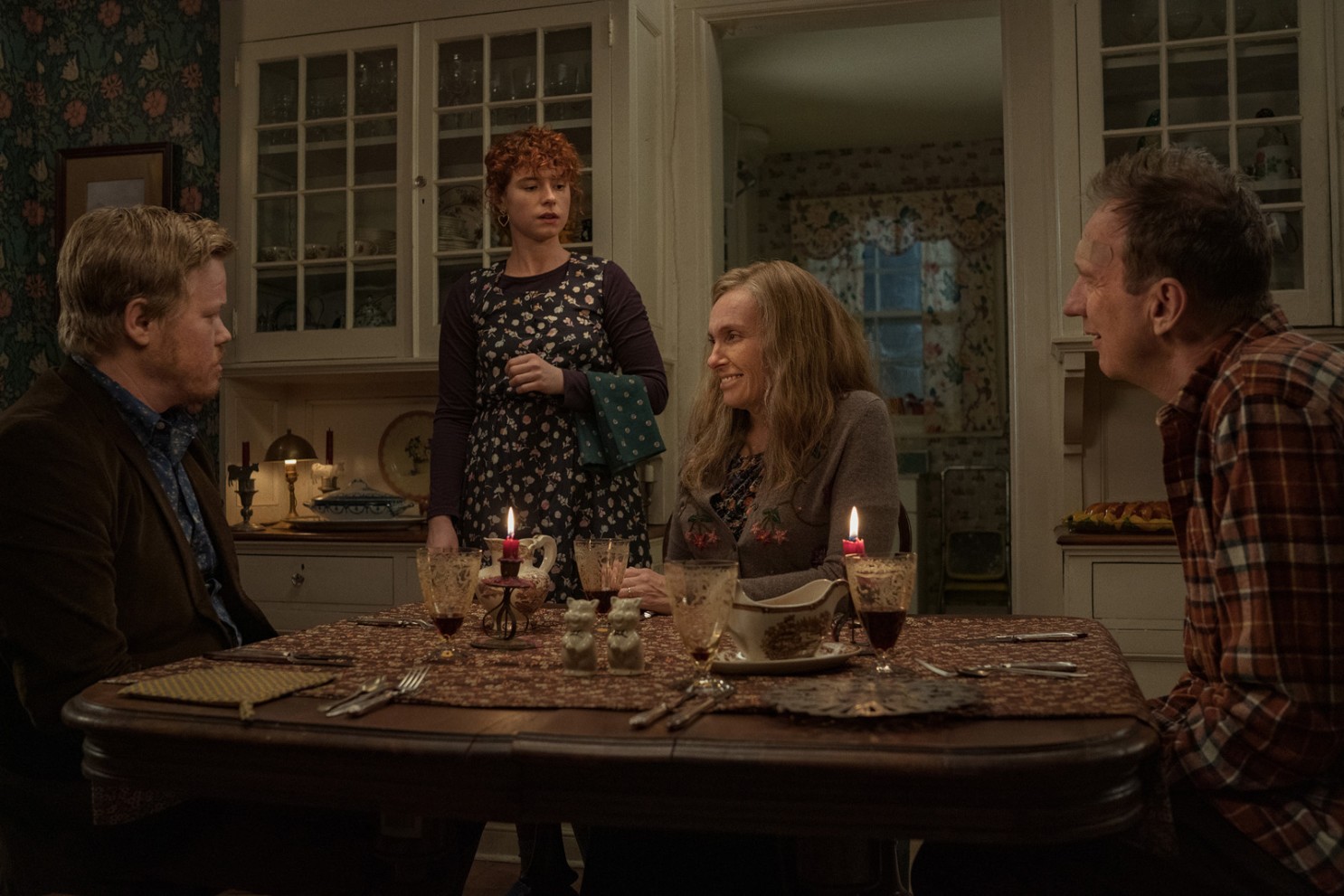 They talk a lot during the trip. In and of itself, that isn’t a bad thing. French director Eric Rohmer made many tremendous movies in which people talked and talked and talked (and did little else). The lengthy conversation establishes that, at least as a couple, these two are doomed. It illustrates that despite their physical proximity they are continents apart emotionally. By the time we get to Jake’s childhood home, we are uneasy and the apprehension grows once we get inside and meet Jake’s overwrought mother (Toni Colette), awkward father (David Thewlis), and shaggy dog, Jimmy. Jimmy is supposed to be dead – his ashes are in an urn in Jake’s childhood room – but no matter. And what’s down in the basement, after all?

Meanwhile, upon occasion, Kaufman steps outside of the story and cuts to a janitor (Guy Boyd) going about his business inside a school. At one point, he watches a movie (directed by Robert Zemeckis). On another occasion, he appears to observe students dancing through the halls as if in a Hollywood musical (this motif will recur during the disastrously bad final fifteen minutes). The janitor’s purpose is never fully explained. We can make some guesses about him but, in the end, they don’t matter and one can argue that, based on the way the movie is structured, they don’t make sense. If he’s the point of the story rather than a loose end, then Kaufman’s bait-and-switch (in which he gets us interested in one character only to drop her and move to another) is unforgivable.

One of the most frustrating things about I’m Thinking of Ending Things is that it tantalizes with possibilities – few of which are realized. The acting by Jessie Buckley and Jesse Plemons is top-notch. They create a palpable “negative chemistry” that oozes toxicity from the start. She’s captivating and there’s a sense that he’s always just on the edge of exploding. Toni Colette and David Thewlis are good at being weird and off-putting, although both have done their fair share of that in the past. Kaufman is a master of atmospherics, creating a crushing sense of claustrophobia, especially during the second car ride which happens at the height of a blizzard.

Sadly, when the car turns off the highway onto a road to nowhere, the movie goes there as well. Or maybe a quote from earlier in the film about “fake, crappy movie ideas” is a better indication of the central problem. To the extent that Kaufman has something to say about memory, identity, and the ephemeral nature of existence, it doesn’t come across particularly well during the denouement, which seems more like an exercise in cinematic masturbation than storytelling. Needless to say, there’s no clear ending. I appreciate movies that make me think but get annoyed if they seem to exist largely to frustrate while stealing my time.

Although there’s a desire to give the benefit of the doubt to any filmmaker who was once involved in the creation of screen treasures, there comes a time when one must ruefully give up the hope that the future will be reflective of the past. Freed from the constraints of his collaborators, Kaufman has ventured down a dark rabbit hole and I’m Thinking of Ending Things takes him deeper rather than bringing him back to a place where he can see the light.