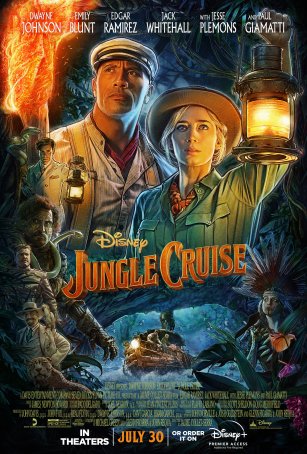 Disney’s latest plundering of their own IP library has allowed them to release a live-action film that isn’t a remake of an animated tale. Jungle Cruise represents their third cinematic interpretation of a popular Disneyland/Magic Kingdom attraction and, like Pirates of the Caribbean and The Haunted Mansion, it mostly ignores the source material except as a jumping-off point and marketing hook. Aside from some minor material in the beginning, this movie owes far less to the theme park attraction than it does to the likes of Raiders of the Lost Ark, Romancing the Stone, and the aforementioned Pirates of the Caribbean. In fact, one could also make the argument that it’s more indebted to Humphrey Bogart’s The African Queen and Werner Herzog’s Aguirre, the Wrath of God than to the ride.

Director Jaume Collet-Serra (The Shallows) and screenwriters Glenn Ficarra & John Requa show a keen understanding of what worked in Raiders of the Lost Ark and pilfer shamelessly from the formula. They sprinkle in a dash of romance (á là Romancing the Stone, which was a Raiders knock-off with a little more humor, a little more sexiness, and a lot more Danny DeVito) and some undead conquistadors and come up with a concoction that is far more entertaining than it has a right to be. Like Pirates, the movie flies far and wide from its origins. The chemistry between Dwayne Johnson and Emily Blunt strikes playful sparks. The screenplay skews funny at the right times, providing Johnson with a motherload of bad puns but giving Jack Whitehall the best slapstick moment (he and Paul Giamatti vie for the role of comedic foil). The only thing that knocks Jungle Cruise down a peg is the lack of a Geoffrey Rush-level villain. Jesse Plemons is okay but he lacks the verve contributed by Barbossa. As for Edgar Ramirez’s Aguirre…let’s just say he’s no Klaus Kinski. 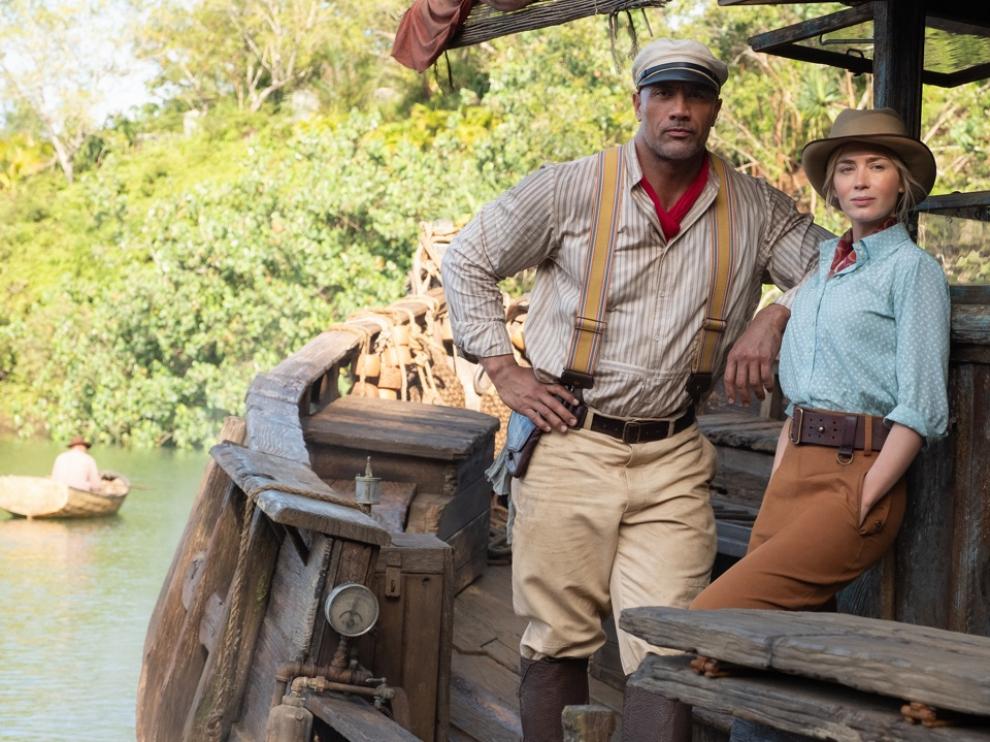 Jungle Cruise is set around the time of World War I (a specific date isn’t given) in and around the Amazon River in South America. Frank Wolff (Johnson) operates a rickety tour boat that takes wealthy Europeans on a “dangerous” excursion where most of the perils are engineered by Wolff to enhance his reputation. He’s an affable con artist who freely admits that the reason to choose him over his competitors is that he’s cheap. A mix-up that starts with Frank acting as an imposter results in him ferrying scientist/explorer Lily Houghton (Blunt) and her uptight brother, MacGregor (Whitehall), up the very wide, very deep creek without a paddle. They encounter all sorts of dangers along the way, including (but not limited to) snakes, more snakes, cannibals, and those undead conquistadors. (What would a Disney based-on-a-ride movie be without undead?) Their goal: a magical tree whose blossoms, once plucked, can perform medical miracles. Lily wants to take one of those flowers back to England and revolutionize modern medicine. Frank has his own agenda. Then there’s the third party, Prince Joachim of Germany (Plemons), who wants nothing more than to give his father (The Kaiser) a key to winning the war, thereby enhancing his own power and prestige.

Although most of the action lacks the edge-of-the-seat quality that made Raiders of the Lost Ark a classic, Jungle Cruise stands up well when placed aside any of the various inspirations that have arrived over the years. Blunt and Johnson share the action and the pratfalls, making this an unusual production in which neither the male nor the female lead is given primacy. I could argue that the film functions better as a romantic comedy than a pure action/adventure excursion. Johnson and Blunt work so well together that it would be fun to spend a couple hours with them in less frenetic circumstances. And, although there are a couple of fun nods to The African Queen, this isn’t close to a remake (any more than it is a sequel to Aguirre). 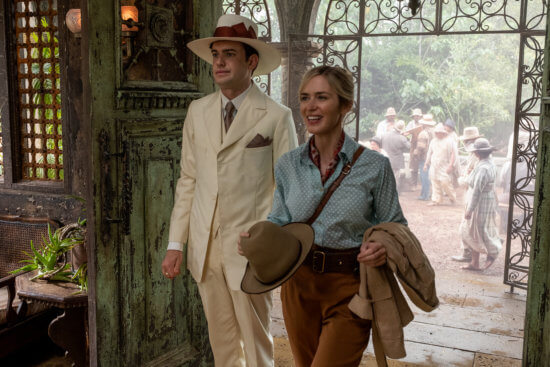 he movie’s big screen Big Moment involves Frank’s attempts to shoot the rapids. Although the lighthearted tone sometimes works against building tension, there’s some to be found in this scene. The special effects are a mixed bag, which is surprising for such a major release. While the CGI used to create Frank’s best friend is effective, some scenes are plagued by shoddy, artificial computer work. To reference another Johnson film, they aren’t Scorpion King­ bad, but one expects more consistency from a big budget movie in 2021.

Jungle Cruise runs about 15 minutes too long (what else is new these days when 2 hours has become the new 90 minutes?) but mostly offers a fun, breezy journey. It may not be another Pirates of the Caribbean but it exists as a reminder that inspiration can come from unusual places.