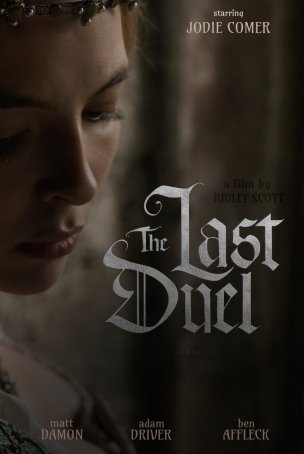 When it comes to historical epics from director Ridley Scott, you never quite know what you’re going to get. On the one hand, he has crafted such gripping, compelling films as the Oscar-winning Gladiator and the tragically overlooked Kingdom of Heaven (make sure you watch the director’s cut). On the other hand, he is also responsible for the snooze-fest 1492: Conquest of Paradise and the uninspired 2010 version of Robin Hood. The Last Duel, based on true events that happened toward the end of 14th century France, falls somewhere in between. Taken at face value, the story might seem unremarkable: the tale of two nobles who fight to the death over the virtue of the wife of one who claims she was raped by the other. However, by employing a Rashomon-inspired approach to developing the narrative, Scott transforms The Last Duel into a deconstruction of chivalry and an exploration of the ugliest aspects of misogyny in the late Middle Ages.

The movie transpires primarily in 1386 and during the years prior to that. Sir Jean de Carrouges (Matt Damon), a renowned but brutish knight, and his friend Jacques Le Gris (Adam Driver) are vassals to Pierre d’Alencon (Ben Affleck), who shows a strong preference for the libertine Jacques – a favoritism that causes friction between the two friends. The wifeless Jean, in need of an heir, elects to marry Marguerite (Jodie Comer), the daughter of a landowner whose loyalty to King Charles VI (Alex Lawther) is in question. The marriage is lacking in passion and Marguerite fails to conceive despite numerous attempts. The rift between Jacques and Jean widens and the former develops an obsession for Marguerite – one that tips into violence when he discovers her alone one day and takes advantage of the situation by assaulting her. When he learns of this, Jean manipulates the legal process to allow the truth of the matter to be decided by God via a duel to the death. 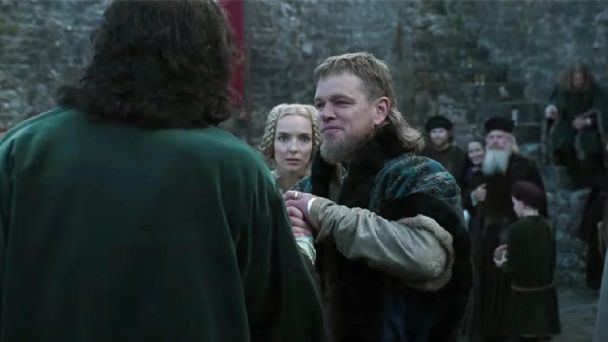 Presented in a traditional fashion, The Last Duel might require 90 or 100 minutes (with at least ten of those being devoted to the brutal clash that gives the movie its title). However, by breaking the story into three chapters, with each illustrating events from a different perspective, Scott creates a more detailed tapestry. Chapter One offers Jean’s point-of-view. Chapter Two recounts many of the same events (and a few others) as seen through Jacques’ eyes. Chapter Three is Marguerite’s account, which is identified as being the most impartial of the three. Unsurprisingly, each of the first two segments presents a sympathetic view of the focal character. In his section, Jean is a gallant man, a decent husband, and a faithful knight. Jacques perceives him as brutish, petty, and hard-headed. Marguerite’s impressions are a mix of the two. The rape is shown twice. To Jacques, Marguerite’s protestations are mild, half-hearted, and easily brushed aside. To Maguerite, it’s a heartless violation.

As with any movie that offers multiple versions of the same (or similar) events, there’s a question of whether the repetition becomes tedious. To avoid this, Scott shows only the most important scenes two or three times and, in each of these, he is careful to alter many of the details to reflect the point-of-view of the focal character. The nature of the “friendly” kiss between Jacques and Marguerite on the occasion of their first meeting is an example. When seen in Chapter One, it’s perfunctory. In Chapter Two, however, it lingers with the promise of something deeper. In Chapter Three, it’s similar to Chapter One with perhaps a tinge of reluctance. In many instances, the shadings are more important than the broad strokes. 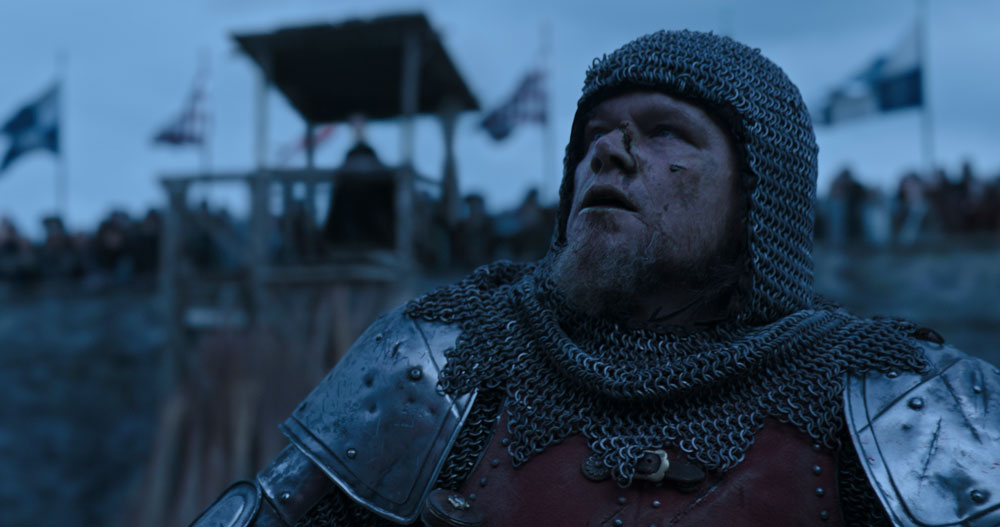 Matt Damon and Ben Affleck, teaming together as writers for the first time since Good Will Hunting (and working with Nicole Holofcener), aren’t necessary comfortable fits as actors for period piece roles. Given the task of providing three very different portrayals of the same character, Damon has the more difficult task. Affleck, more obviously miscast, plays a man who’s pretty much a jerk regardless of which perspective is being represented. Adam Driver has no difficulty capturing Jacques’ sleazy charm and smarminess. The standout is Jodie Comer. One of the central figures in the TV series Killing Eve (she was also in this year’s Free Guy), she has full command of Marguerite and makes her the moral and narrative focal point.

Those expecting an action film may be disappointed by what The Last Duel offers. While the climactic battle is rousing, suspenseful, and suitably brutal, the majority of the film is more about dialogue, perception, and character interaction. There are a few perfunctory war scenes but those are presented only when necessary to advance the plot. Scott is more interested in illustrating how modern preconceptions of the concept of “chivalry” aren’t necessarily reflective of the 14th century realities and how a deeply embedded elements of misogyny were in it. (At one point, it’s noted that the rape wasn’t a crime against a person but rather a defilement of Jean’s “property.”) Those themes coupled with the atypical manner in which they are presented give The Last Duel more substance than one might expect from a medieval melodrama.