An atmospheric period-piece murder mystery, The Limehouse Golem combines elements of Sherlock Holmes and Jack the Ripper into a Victorian-era gothic stew that, although perhaps not as ultimately satisfying as it might have been, nevertheless provides for an unsettling two hours. The film gets high marks for its effective recreation of 1880 London with its benighted alleys and raucous music hall and its ability to craft two interesting main characters – inscrutable police inspector John Kildare (Bill Nighy) and celebrity Lizzie Cree (Olivia Cooke). The whodunnit/murder mystery aspects of The Limehouse Golem are its weakest elements, hamstrung by the twin limitations of the under-120-minute running time and the “conservation of characters” necessity (there are only so many viable suspects). 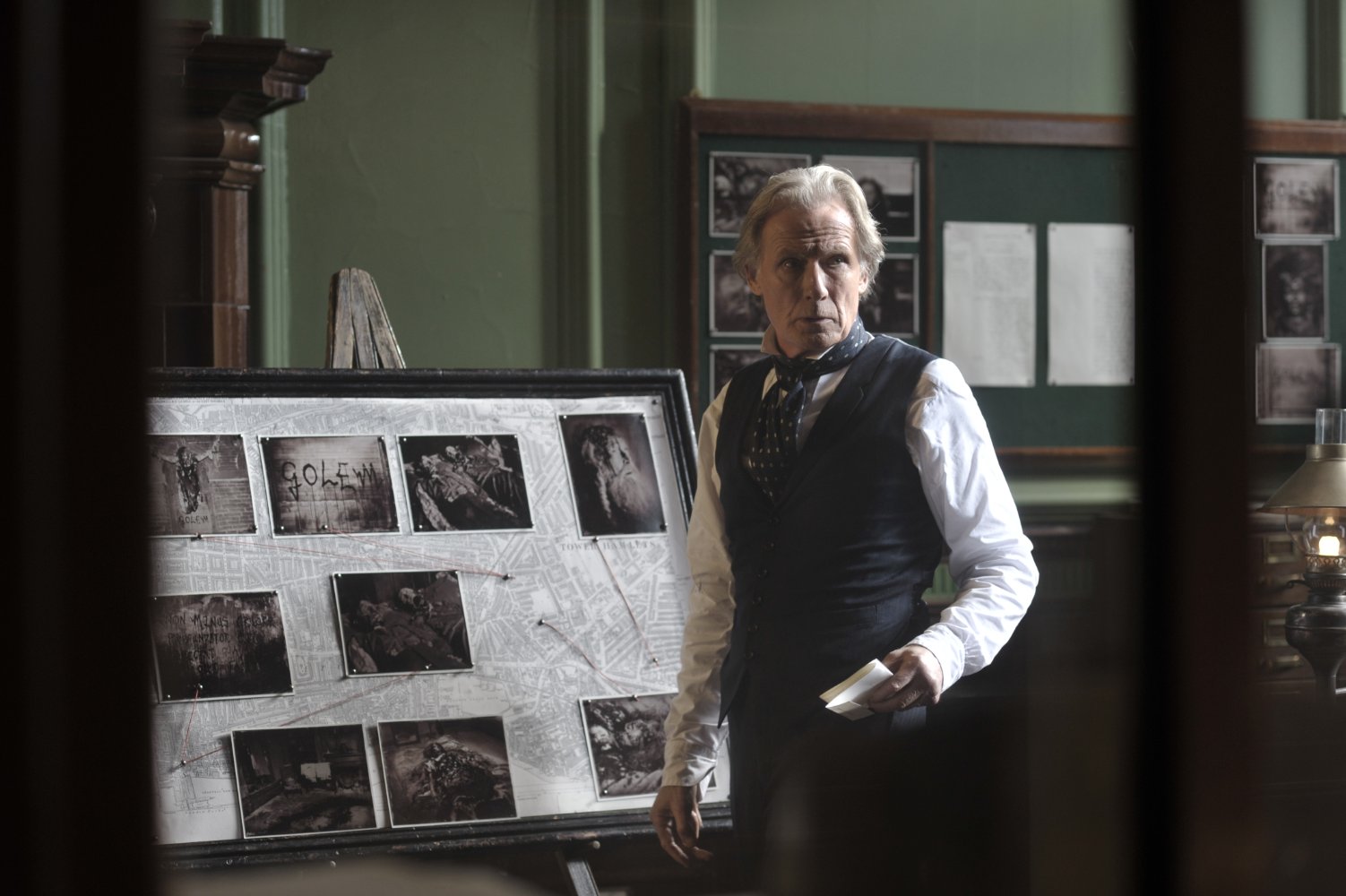 The central narrative follows Inspector Kildare’s investigation into a series of violent killings attributed to “The Limehouse Golem.” Although the film includes several real-life people – Karl Marx (Henry Goodman), George Gissing (Morgan Watkins), and especially Dan Leno (Douglas Booth) – it is predominantly fictional. The character of The Golem is strongly influenced by Jack the Ripper, the serial killer who stalked Whitechapel less than a decade later. Kildare’s investigative abilities are partially modeled after those of Sherlock Holmes, although he is by no means as brilliant and is hampered by the limitations of 19th century forensic science. (One sequences, in which a crime scene is contaminated by reporters and curiosity-seekers, shows the difficulties faced by the police in collecting evidence.)

The film’s other major storyline tracks the life and career of Lizzie, who is currently on trial for murdering her husband, John (Sam Reid). Lizzie tells her life’s story to Inspector Kildare, who visits her in prison because he believes John may be connected to the Limehouse Golem killings. Her tale – that of a mistreated girl who rose to become a music hall star – captures Kildare’s sympathy and he becomes Lizzie’s advocate, arguing that if he can prove John was the killer, she can go free. 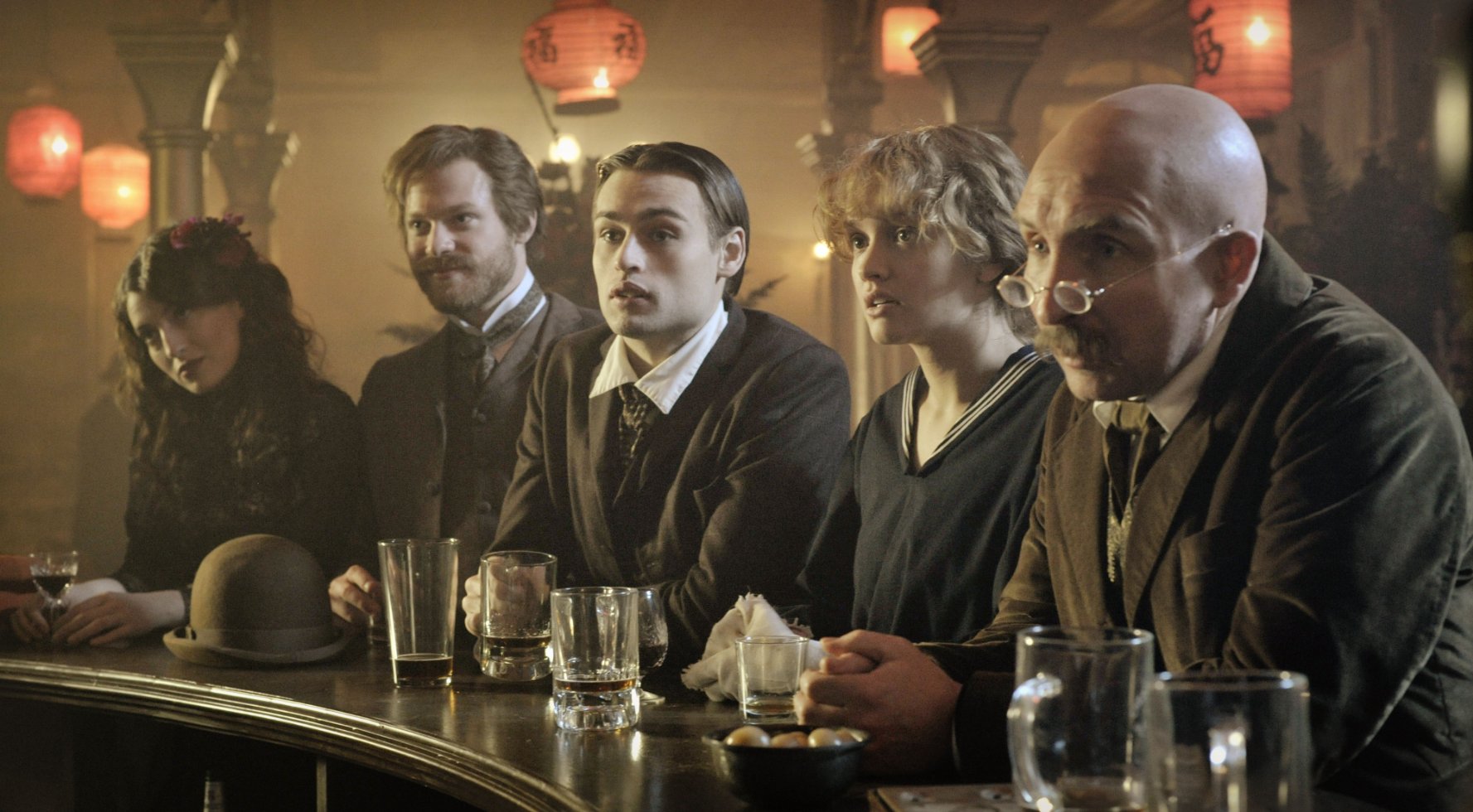 The Limehouse Golem’s wedding of the two facets of its narrative is at times unwieldy and, as things develop, Lizzie’s flashbacks become more compelling than the murder mystery. The investigation turns generic and at times is even a little plodding. Nighy, playing the variety of emotionless, sardonic character he excels at, doesn’t capture the camera’s attention the way Olivia Cooke (Me and Earl and the Dying Girl) does and, as a result, his scenes are less engaging.

Of course, there is a twist. What motion picture murder mystery would be complete without one? When it arrives, however, it’s not all that surprising, although director Juan Carlos Medina is determined to provide us with a scene-by-scene re-interpretation showing how this makes sense and isn’t as contrived as it initially seems to be. The resolution feels a little disappointing although it works thematically when considering that the movie is interested in the twin ideas of female empowerment and an obsession with celebrity – two concepts that are as visible today as they were 140 years ago.

Medina’s greatest contribution to The Limehouse Golem is the verisimilitude he brings to the proceedings. The screenplay by frequent Matthew Vaughn collaborator Jane Goldman (based on Peter Ackroyd’s 1994 novel, Dan Leno and the Limehouse Golem) comes to life with a force that eludes many period pieces. We feel like we’re there, touring the dirty, seedy parts of Victorian London. The city becomes a supporting character and the specter of the grotesque that gave birth to the fictional Limehouse Golem and the real Jack the Ripper is pregnant in the air. Those who like stately, cozy murder mysteries may be turned off by the graphic displays of gore and those who like complex murder mysteries may find that the whodunnit? is resolved in too clean a manner. But there’s more to The Limehouse Golem than the killer’s identity and those aspects make this a solidly entertaining look back in time.