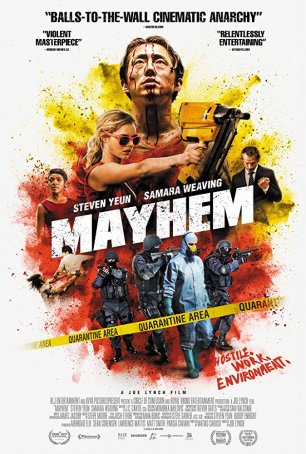 Mayhem, a bloody exploitation satire, is a little like The Purge in an office building. Although designed in part as a skewering of intra-office politics and the unpleasantness of climbing the corporate ladder, the movie quickly devolves into a fun little romp through horror/thriller tropes that becomes increasingly gory as the running time mounts. While this sort of film has its share of pleasures, it runs out of steam long before the end credits arrive. At some point just past the middle, it goes on autopilot. The glimpses of cleverness become less frequent and the movie seems more interested in upping the body count than advancing the (admittedly thin) story. There are missed opportunities and the ending is a bit of an anti-climax.

Mayhem is one of those “mysterious virus” films. In this case, however, the sickness itself isn’t fatal, although the consequences of contracting it could be. Once infected by the virus, the victim loses all inhibitions. The ego and super-ego are suppressed and the individual is purely ruled by id. The result: rape, rage, murder, rampant sex…all the ugly, instinctual impulses that civilization attempts to control. Plus, as a result of a legal loophole discovered by an ambitious young executive, Derek Cho (Steven Yeun), a person can’t be held accountable for any actions committed while under the influence. There’s a cure but it takes about eight hours to work. So anyone infected with the “red eye disease” must be quarantined for that long. 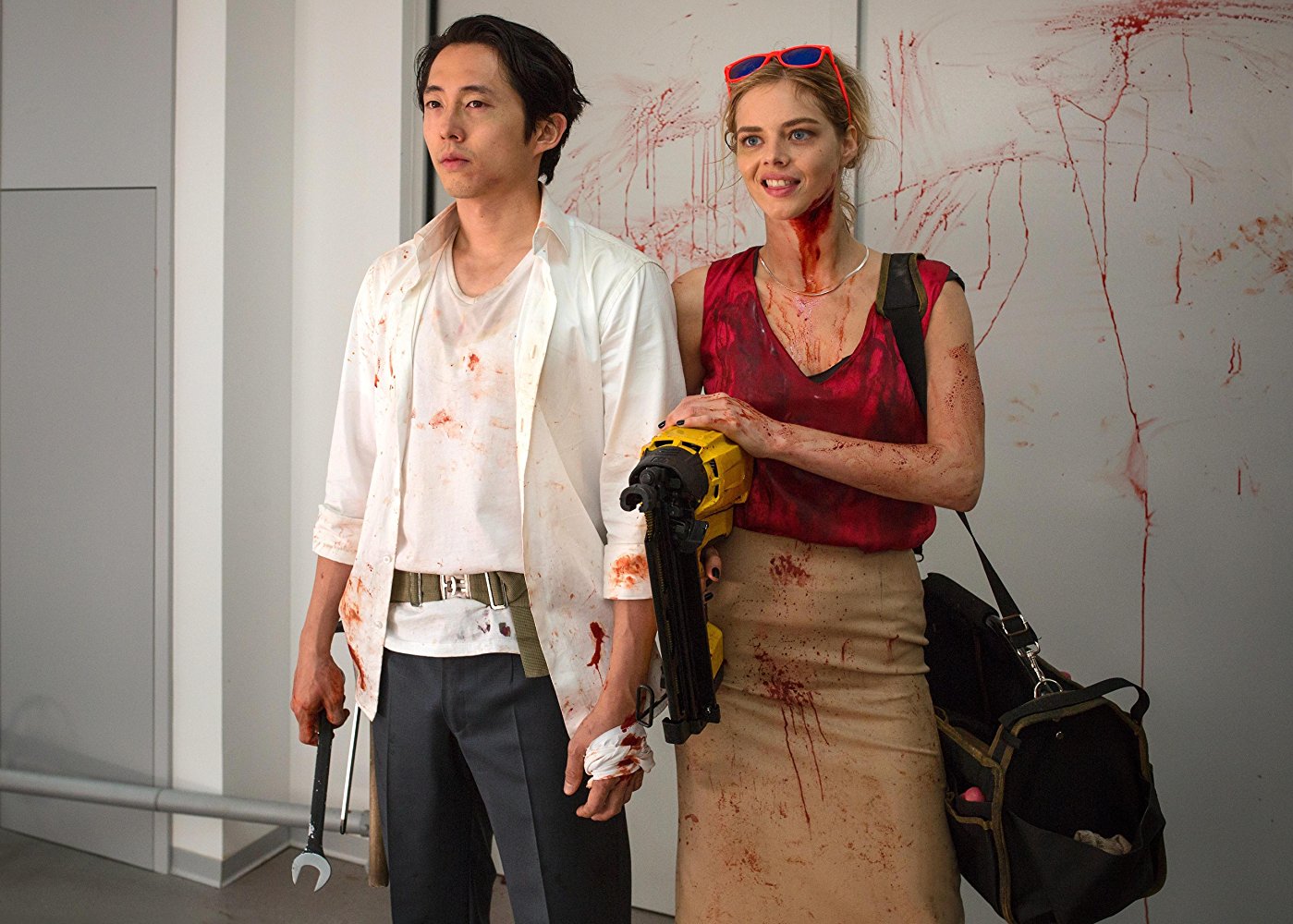 Derek is our (anti-) hero. As a result of his legal discovery, he has been on the fast track but it all comes to a screeching halt when a spiteful co-worker nicknamed The Siren (Caroline Chikezie) frames him for incompetence and he is fired. Just before leaving the company’s employment, he meets with a desperate woman, Melanie Cross (Samara Weaving), who comes seeking help to avoid foreclosure on her home. Derek rebuffs her. He is packing to leave and Melanie is still inside when the building comes under quarantine – the red eye virus is in the air and soon everyone is infected. They have eight hours to survive and anything they do can’t be held against them. Derek and Melanie soon become reluctant allies with a common cause: get to the top floor and confront the boss, John Towers (Steven Brand), and his ally, Irene Smythe (Kerry Fox), while settling scores along the way.

The movie has the feel of a low-budget production (which it is). The acting is mediocre at best. There are no big-name stars (although Steven Yeun is fairly well-known both as a popular voice actor and for his contribution to The Walking Dead). The choreography is sloppy and the cinematography straightforward. The ending lacks zing and is therefore only partly satisfying. The sex scene, which could have been as deliciously off-the-wall as the crazy Jeff Goldblum/Emma Thompson coupling in The Tall Guy, is disappointingly tame.

The movie starts out with a bang – an engaging premise, a lot of energy, and a fun, kinetic approach. For about 30 minutes, director Joe Lynch had me. Mayhem was living up to its name. But the initial burst lasted only so long and, before the movie was over, it felt less like a blistering satire of corporate life than a generic B-movie. There’s enjoyment to be had here, especially for fans of exploitation films, but be aware that the movie’s best moments come early.