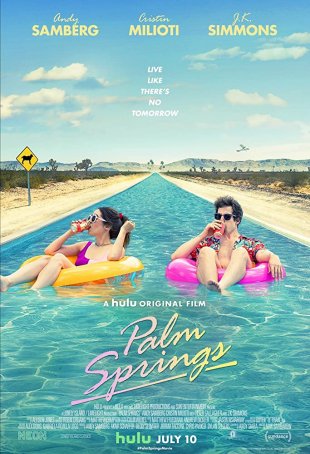 Groundhog Day was released in 1993. For the next 20+ years, no major production touched the Twilight Zone-ish premise. Recently, however, a new generation of filmmakers has discovered Groundhog Day and decided to try their hands at expanding the concept. Movies like Before I Fall and Happy Death Day have been joined by the streaming series Russian Doll. Although most don’t directly reference the Bill Murray/Harold Ramis film, the debt is undeniable. Equally undeniable has been the poor use made by these wannabees in expanding the core concept. And, while Palm Springs doesn’t stray too far from the idea introduced by Groundhog Day, it’s the first derivative film to be more deserving of a commendation than derision. Or, to put another way, it feels more like an homage than a rip-off.

It’s probably no coincidence that it has taken one ex-SNL castmember (Andy Samberg) to successfully retool the premise made famous by another (Bill Murray). Like Murray’s weatherman Phil, Samberg’s Nyles is trapped in a time loop. Unlike Phil, he doesn’t have “I’ve Got You, Babe” to wake him up every morning. Instead, it’s the voice of his faithless girlfriend, Misty (Meredith Hagner). When we first meet Nyles, he has been reliving the same day for a very long time and is bored with his immortality. The cause of his affliction has something to do with a mysterious cave. This allows him to be joined in the trap by two others, both guests at the wedding of his girlfriend’s bff, Tala (Camila Mendes). The first is Roy (J.K. Simmons), whose anger for Nyles fuels a homicidal rage. The other is Tala’s older sister, Sarah (Cristin Milioti), who innocently follows Nyles into the cave following a hook-up gone wrong, and finds herself spending eternity reliving a day she’d rather forget. 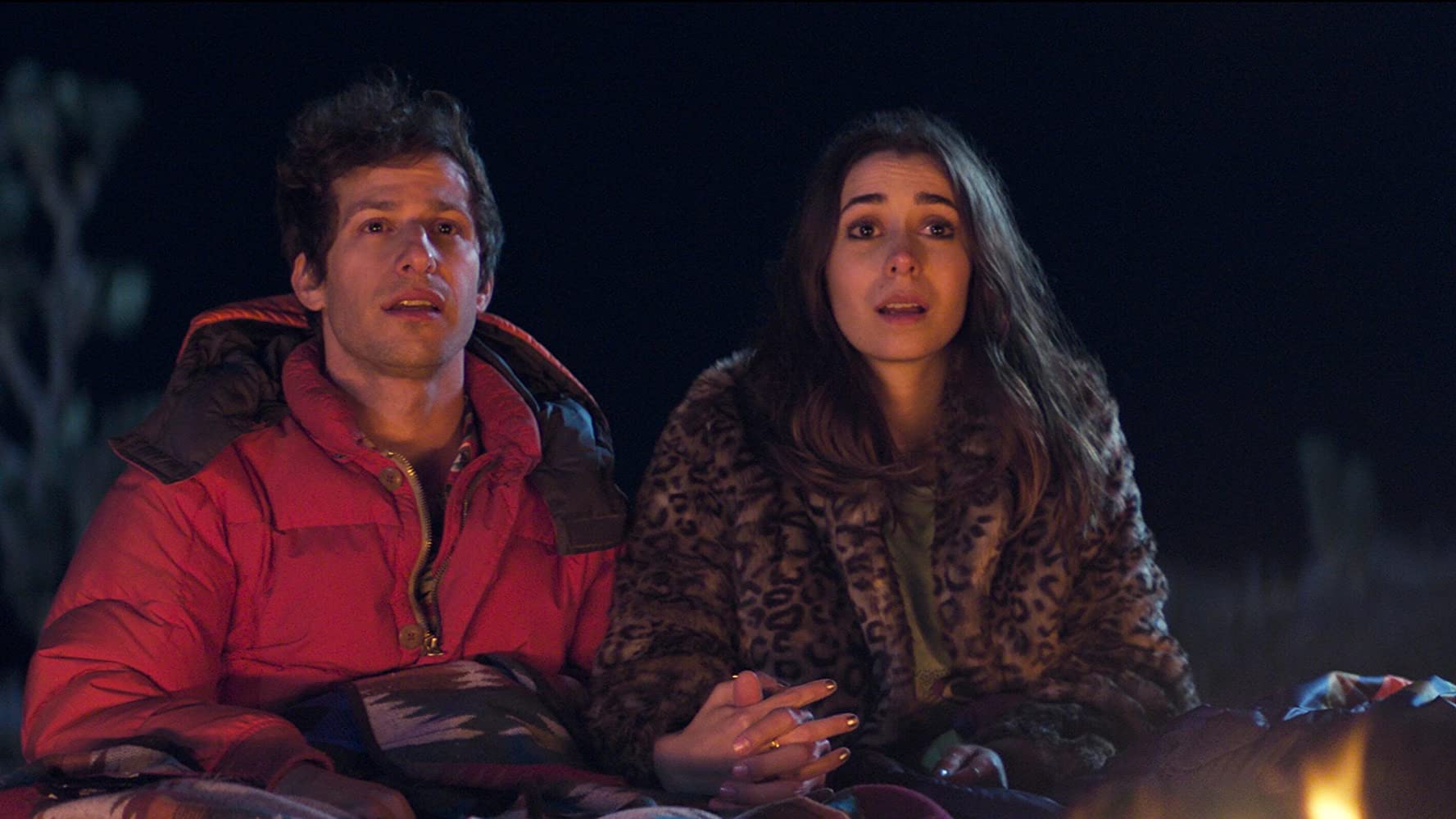 Palm Springs has three things going for it: (1) the screenplay, credited to Andy Siara but undoubtedly polished by Samberg to some degree, is both funny and, when necessary, romantic; (2) the chemistry between Samberg and co-star Cristin Milioti is palpable; and (3) J.K. Simmons is great (but when is he not?). The movie uses the Groundhog Day concept to good effect, providing the foundation for what is really an offbeat rom-com, but it doesn’t linger for so long that it feels drawn-out. It focuses a little too much on explaining the time loop and using technobabble to postulate how an escape could be affected. One of the best things about Groundhog Day is that the screenplay simply accepts the situation as is. For something fantastical like this, that’s the best approach. 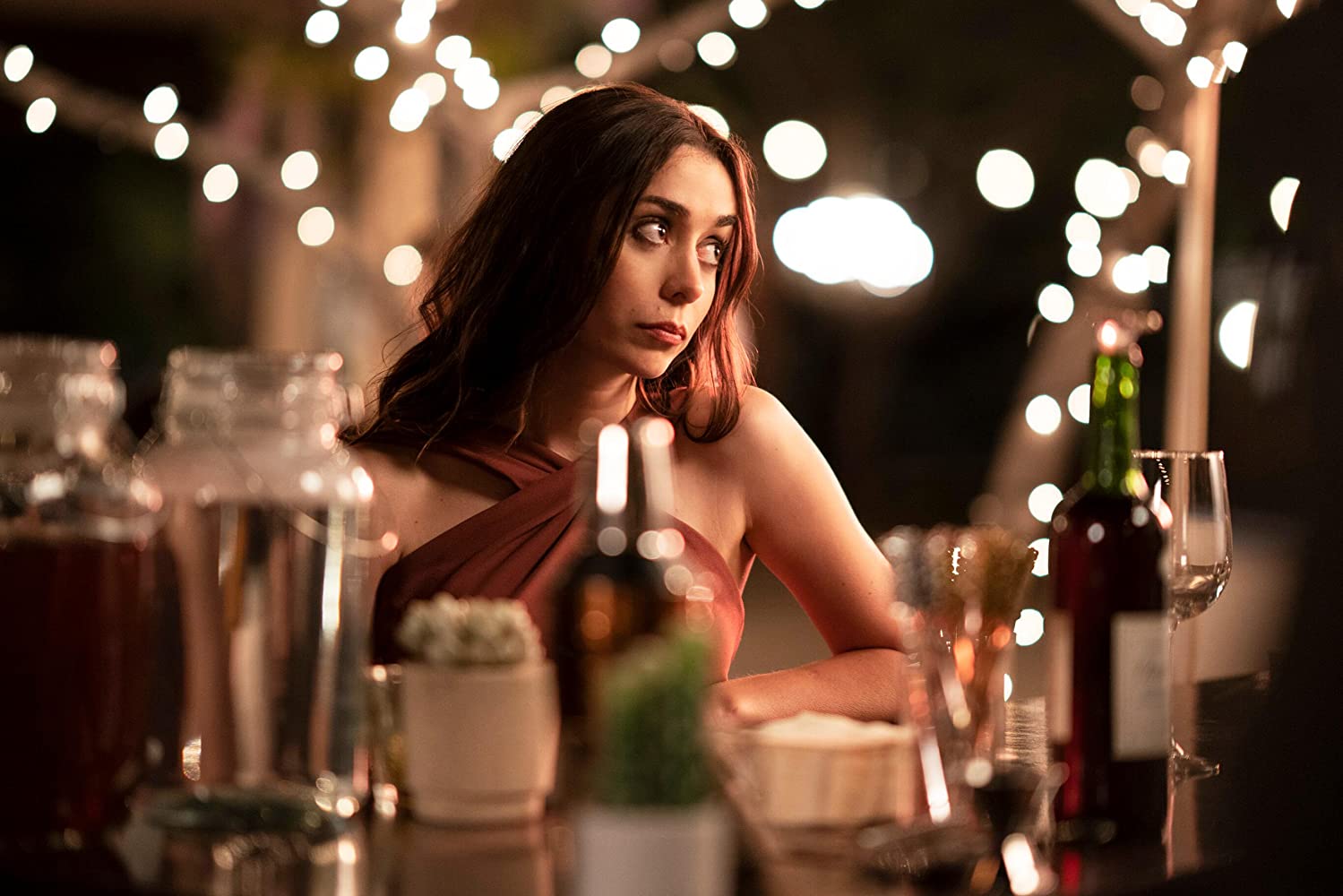 For Nyles, Samberg has adopted a snarky, world-weary persona, which is understandable since we only briefly glimpse him prior to his ordeal. As was the case with Phil in Groundhog Day, this is about how the slowly dawning realization of love collapses all the barriers he has erected. Cristin Milioti is a great foil for Samberg and it’s easy to see how the initial friction of their relationship becomes combustible in a different way. The film’s best scenes are those in which these two are getting to know one another. There’s a pleasant whimsy to them, especially the one with the dinosaurs. (See – things like this are better without an explanation.) The movie goes off-track starting with The Morning After and then stalls while Sarah takes a crash-course in Quantum Mechanics.

Palm Springs is an example of a theater-quality movie making its debut on one of the ever-expanding number of streaming services (this one is on Hulu). Films like this – smart, funny, and appealing to a wide cross-section of demographics – continue to elevate the concept of an “at-home” movie far above what it once was. With the impact of the coronavirus accelerating changes of how we watch films, productions like these are necessary to remind viewers that the fierce competition among streaming services could result in better movies playing on TV than in multiplexes (if and when they re-open). Palm Springs is a delightfully romantic flight-of-fancy with enough salt to avoiding becoming too saccharine and a story that proves there’s room for more than one flavor of the Groundhog Day premise.