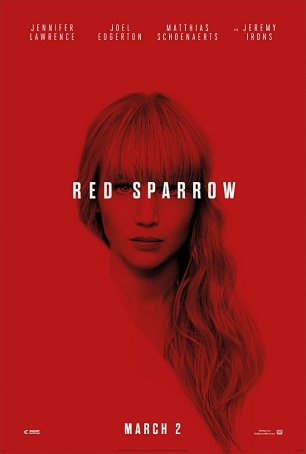 Red Sparrow is a deliciously perverse, unflinchingly violent thriller – a modern-day espionage tale that breaks with the tradition of making the spy business the purview of suave and debonair characters. With a story that argues that the Cold War may not have thawed much in the intelligence world, director Francis Lawrence and his leading lady, Jennifer Lawrence, take us on a journey that might cause even James Bond to flinch. The film is an unapologetically hard-R, with Lawrence taking chances she has never before entertained. By turns high-octane and slow-burn, it manages to hold the viewer’s attention for its nearly 140-minute running time, although there are instances when the narrative gets bogged down in subplots and there’s a sense that some additional fleshing out of key relationships (something that could only have been accomplished in a mini-series format) might have resulted in a more satisfying ending.

Red Sparrow’s electric prologue cross-cuts between two seemingly disparate storylines that won’t intersect until nearly an hour into the proceedings. Prima ballerina Dominika Egorova (Jennifer Lawrence) is performing in front of a packed house for the Bolshoi Ballet when the unthinkable happens – an ugly accident that leaves her dancing dreams as twisted and broken as her leg. Meanwhile, in Gorky Park, CIA operative Nate Nash (Joel Edgerton) is meeting with his informant when the police arrive. A chase ensues and, although Nate escapes capture by getting across the barrier at the entrance to the U.S. Embassy, the agency censures him and suspends him from field operations. 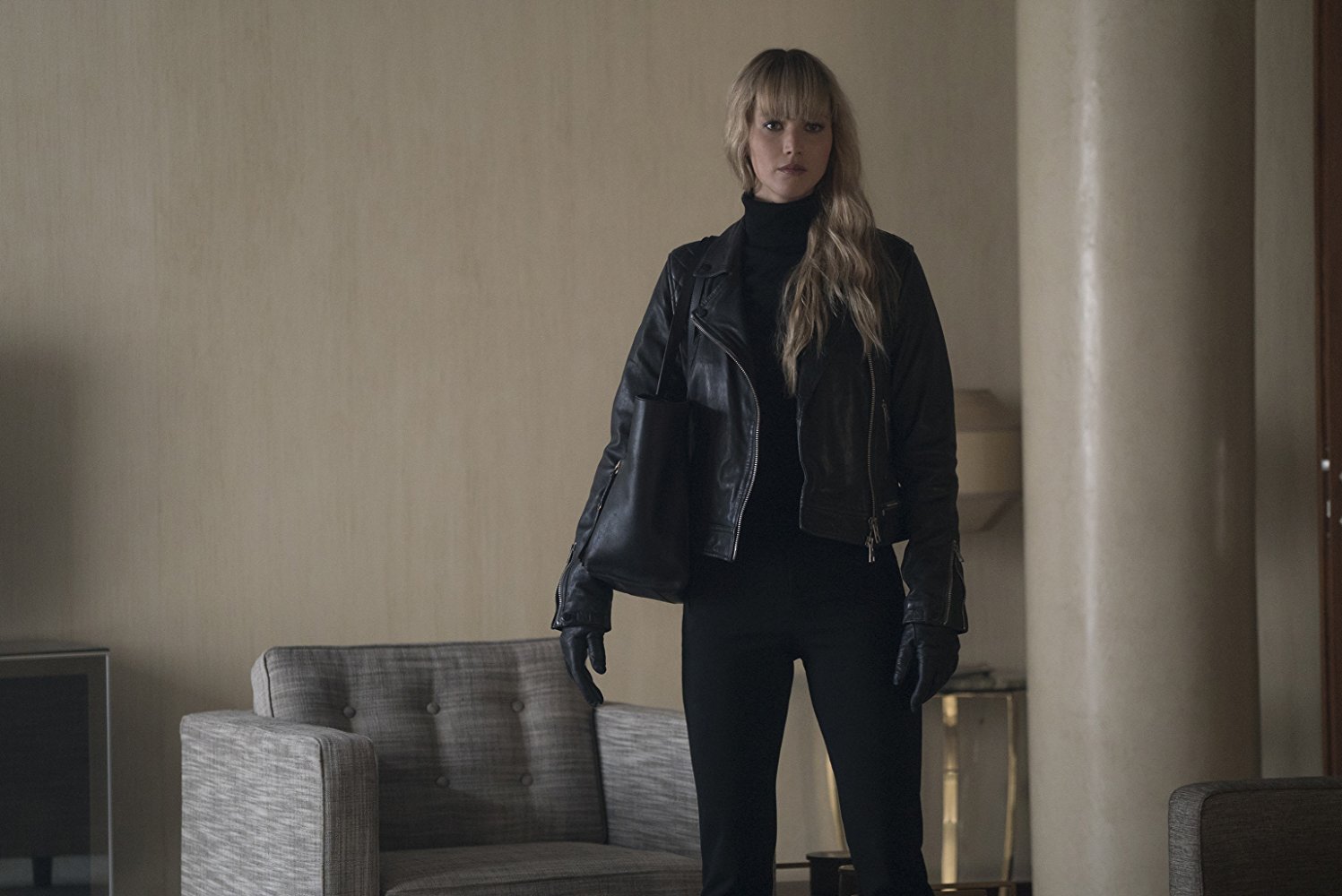 With her Bolshoi career behind her, Dominika must find a new way to earn the money necessary to pay for her mother’s medical care. Enter not-so-kindly Uncle Vanya (Matthais Schoenaerts), a high-ranking Russian intelligence officer who offers to shepherd her through what amounts to a “spy school” run by the nameless Matron (Charlotte Rampling). Although initially reluctant to go “all the way”, Dominika eventually immerses herself in the training and catches the attention of her uncle’s boss, Director Zakharov (Ciaran Hinds), and the taciturn General Korchnoi (Jeremy Irons). They give her an assignment: seduce Nate – who is now back in the field – by any means necessary and learn the identity of his source. Of course, Nate (not being stupid), knows immediately that she’s playing him and tries to turn the tables by offering her the opportunity to become a double agent. Triple-crosses ensue.

By far the most interesting aspect of Red Sparrow is the game of seduction and counter-seduction that goes on between Dominika and Nate. Jennifer Lawrence and Joel Edgerton share sufficient chemistry for the relationship to work and Lawrence’s performance, which is by turns inscrutable, tough, and vulnerable, keeps us uncertain how sincere Dominika is at any moment.

It’s evident that Jennifer Lawrence has reached a high level of comfort with director Francis Lawrence, who worked with her on three of the four Hunger Games movies (the only one he didn’t helm was the first one). In addition to performing her first nude scene, Lawrence is depicted being brutally tortured in a sequence that skirts the edge of NC-17 violence. The camera is as relentless as Dominika’s questioners, refusing to look away and, unlike with (for example) equally graphic scenes in the Lethal Weapon and Mission: Impossible series, there’s no satisfying rescue in the offing. Throughout Red Sparrow, Dominika spends a lot of time applying makeup to cover up cuts and bruises. The film presents her not as a victim, however, but as someone with the inner strength and fortitude to overcome and bend circumstances to her liking. 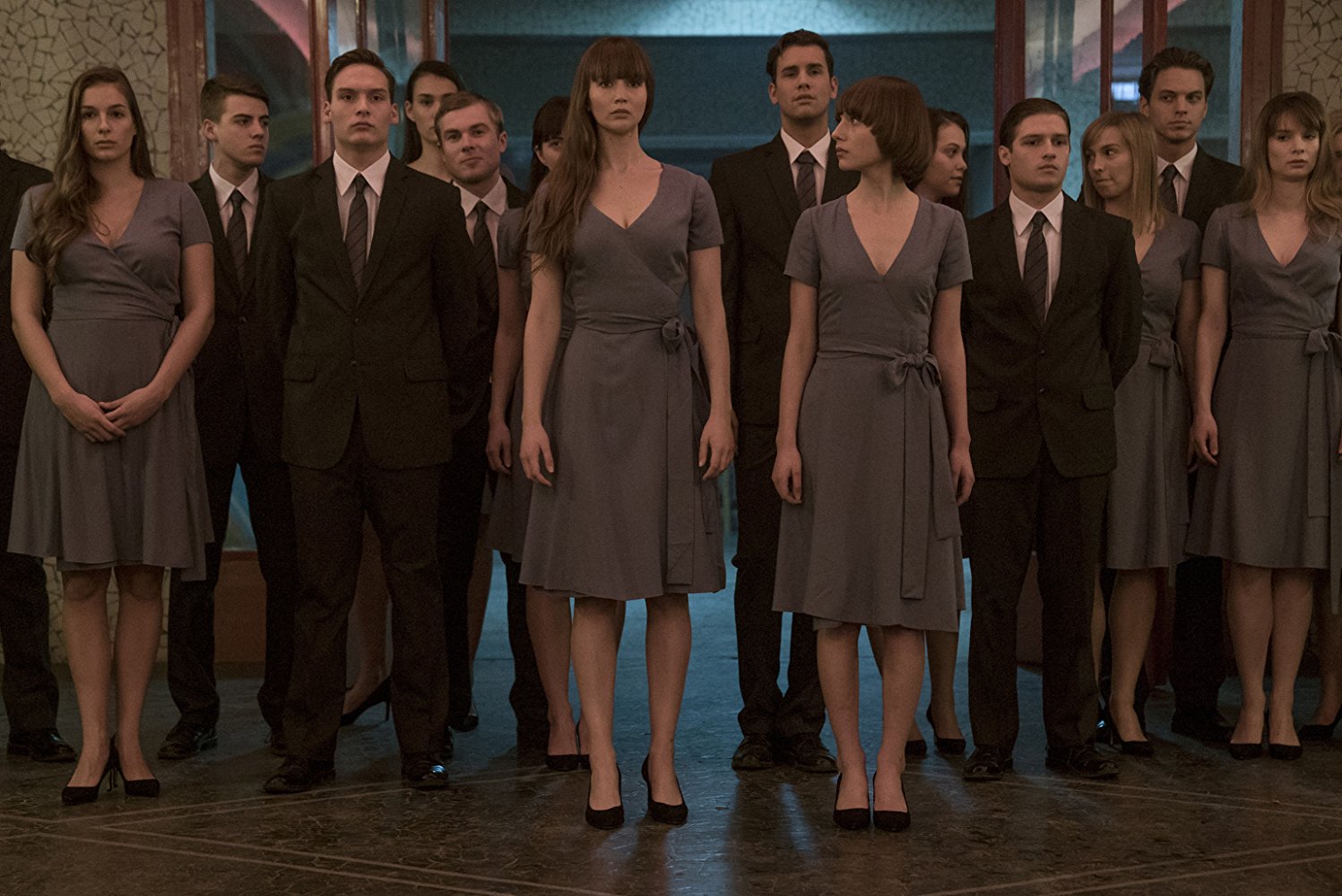 One constraint Red Sparrow is unable to overcome is the running length. In order to keep things moving, Francis is forced to gloss over exposition that might have been clearer if given more time. The “spy school” sequences are fascinating but that part of the film is over too quickly. And the give-and-take interaction between Nate and Dominika, as the two vie to get the upper hand while developing genuine feelings for one another (or do they?), could have been extended. There’s enough in the movie to provide an appetizer but it’s not sufficient to fill the belly.

Red Sparrow provides an effective contrast to Charlize Theron’s Atomic Blonde. The latter, based on a graphic novel, was more interested in visual razzle-dazzle than intricate plotting. This movie, based on the book written by ex-CIA operative Jason Matthews, is more hard-core and down-to-earth. Although no less visceral than Atomic Blonde, it’s better grounded and the characters feel less like comic book creations than real people. The underlying uncertainty gives the movie a hook and an edge and there are enough mandatory twists to keep viewers unsure about where the resolution is headed. On balance, Red Sparrow is a reasonable choice for those who don’t mind a fair amount of graphic sex and violence mixed in with the spying, back-stabbing, and double-dealing expected from this genre.