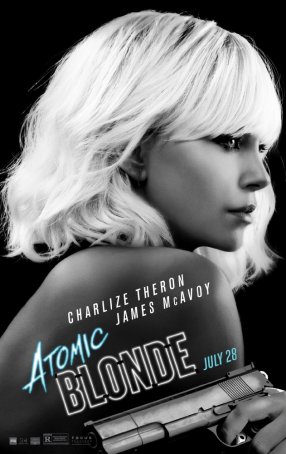 Atomic Blonde combines the storytelling intrigue of a LeCarre/Deighton Cold War spy novel with the in-your-face kinetic style of John Wick. The result, while at times a little too visually chaotic, is bracing. Headlined by a committed Charlize Theron, Atomic Blonde offers the kind of kick-ass female action hero the non-superhero side of the genre could use more of. And, although a few of the movie’s surprises are easily predicted (especially when one applies the Law of Character Conservation), Atomic Blonde is still able to hold back a twist or two that even a seasoned veteran of spy thrillers may not see coming.

The movie opens as the Berlin Wall is about to fall. Citizens, giddy at the possibility of a reunion with their brethren, are chipping away with sledgehammers and chisels. It’s 1989 and a decades-old symbol of division and oppression is about to crumble along with the current order. Meanwhile, spies on both sides are preparing to enter this brave new world. The McGuffin, a watch that contains a database of all active undercover agents, is coveted by both the East and the West. After being smuggled by a defecting Stasi official to a British agent, it is subsequently stolen by a Russian who goes rogue and offers it for sale to the highest bidder. 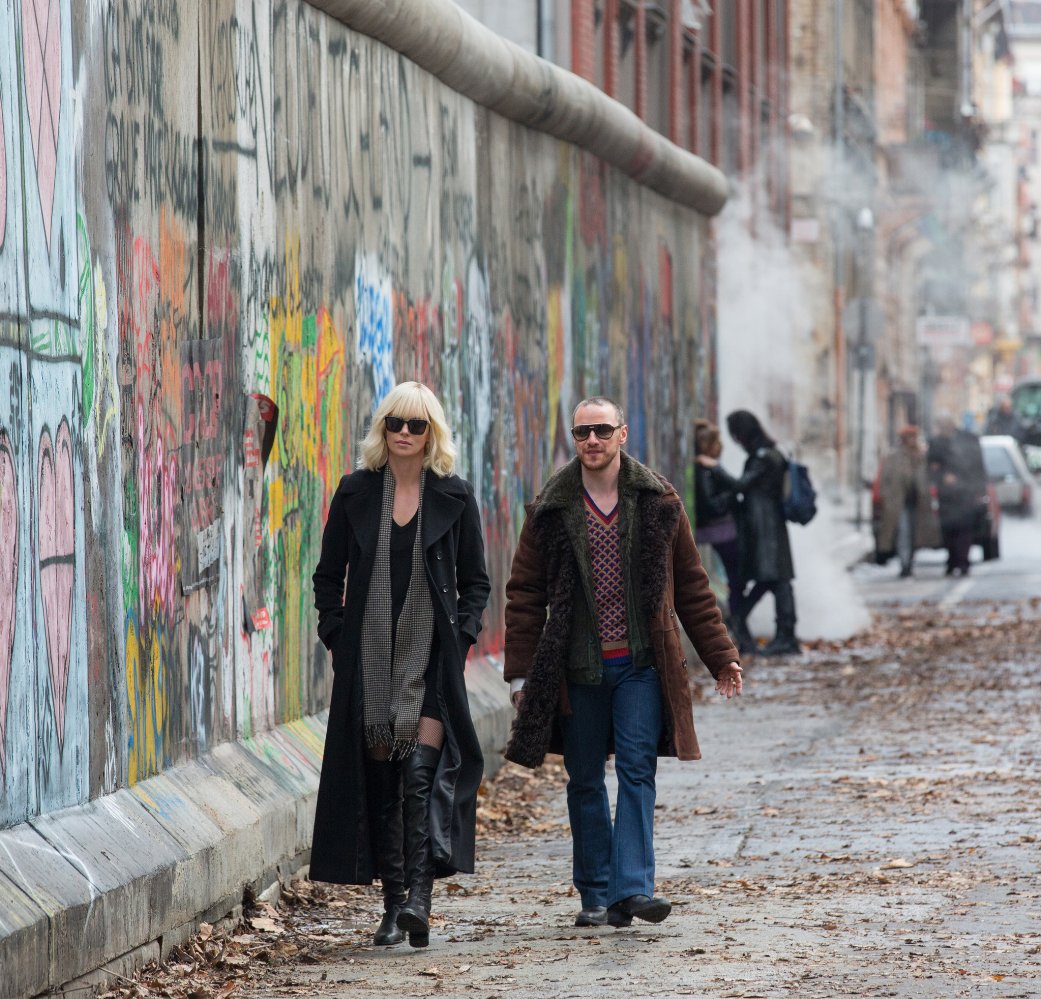 MI6 sends one of its most dynamic agents, Lorraine Broughton (Charize Theron), into Berlin to retrieve the list and, as a secondary objective, identify and eliminate a double agent who has eluded capture for years. She is paired with the mercurial head of British Intelligence’s Berlin Office, David Percival (James McAvoy), who has his own agenda. With her cover blown almost upon entry into Germany, Lorraine ends up in a series of brutal fights and is forced to rely on the sage advice given to her by MI6’s chief: Trust no one.

Leitch, who co-directed John Wick with Chad Stahelski, split with his partner so he could helm Atomic Blonde alone while Stahelski did John Wick 2. Stylistically, Atomic Blonde echoes John Wick with the same sort of visceral, high-octane action sequences. The movie doesn’t do anything new – we’ve seen all these moves before, whether in a James Bond film, a Jason Bourne film, or something else – but Leitch directs with confidence and keeps things moving. He also employs an aesthetic that evokes an icy cool time-locked Berlin (Kurt Johnstad’s screenplay is based on a graphic novel series called “The Coldest City” by Anthony Johnston & artist Sam Hart). Blue saturates the visual palette and ’80s Europop standards suffuse the soundtrack. Did you think you’d get through Atomic Blonde without hearing "99 Luftbaloons"?

Spy thriller fans will be delighted that nearly every expected cliché makes an appearance. Despite an overall familiarity, however, there’s room for the unexpected. Most of the story is presented in flashback, which allows for side commentary while increasing the pool of suspects. As Lorraine tells her story, we begin to wonder about the three powerful people listening to her: MI6 chief “C” (not “M”) (James Faulkner), his deputy, Eric Gray (Toby Jones), and CIA honcho Emmett Kurzfeld (John Goodman). One note of caution: don’t leave the theater too early – the epilogue is more than last-minute window dressing.

Whether wearing red stilettos, showing off her super-lean, brutally scarred body in an ice bath, or kicking, punching, and shooting her way through a small army of villainous henchmen, Theron takes the next step on the journey she started in Mad Max: Fury Road. Her Lorraine Broughton ascends to the pinnacle currently occupied by the likes of Sigourney Weaver’s Ripley and Linda Hamilton’s Sarah Connor. She gives and takes like Keanu Reeves in the John Wick films but emerges looking a lot more stylish than the former Matrix star. James McAvoy, who made this movie immediately after finishing Split, appears not to have left behind his previous personality altogether. His David Percival is charming, Machiavellian, and thoroughly untrustworthy – a perfect spy movie character. Sofia Boutella, as a novice spy and Lorraine’s lesbian love interest, seems largely unnecessary (in the same way that Bond girls are largely unnecessary).

Atomic Blonde is perfect summer entertainment in that it does what it promises for about two hours. It’s brash, energetic, and exhilarating and, although it may lose points because of a lack of originality, it gains them back as a result of Theron’s dedication and Leitch’s style. We’re at the end of what has been an unconventional summer at theaters. Atomic Blonde ends things with a blast. It’s certainly not the best, the most important, or the highest-profile title of the season but it offers solid spectacle-tinged entertainment – exactly what summer movies are supposed to do but too often fail at.