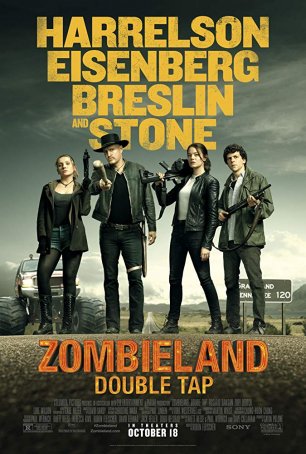 If you liked Zombieland, you’ll probably like Zombieland: Double Tap, just not as much. It has some good laughs, although they don’t come as frequently. It has some clever moments, but not as many. And the character interaction is fun, at least most of the time. In short, like many follow-ups, it’s savvy enough to replicate most of what made its predecessor well-liked and perhaps that’s all viewers want from their sequels in today’s market. Are new things scary? Are bursts of inspiration intimidating? It says something that one of Double Tap’s two best sequences comes during an intra-credits “Easter egg” and features Bill Murray (two zombie movies in one year – see also The Dead Don’t Die). The other one involves the opening “Columbia Pictures” logo.

Zombieland arrived in theaters ten years ago. The gap is curious – why wait a decade to make a sequel if the first movie was deemed sufficiently successful to warrant one? There is one benefit to the delay, however. Ten years is long enough to dim the memories of Zombieland’s unique elements, thereby making Double Tap seem less like a repetition of the first movie, which is what it is. This is a zombie-comedy-road movie just like its predecessor. 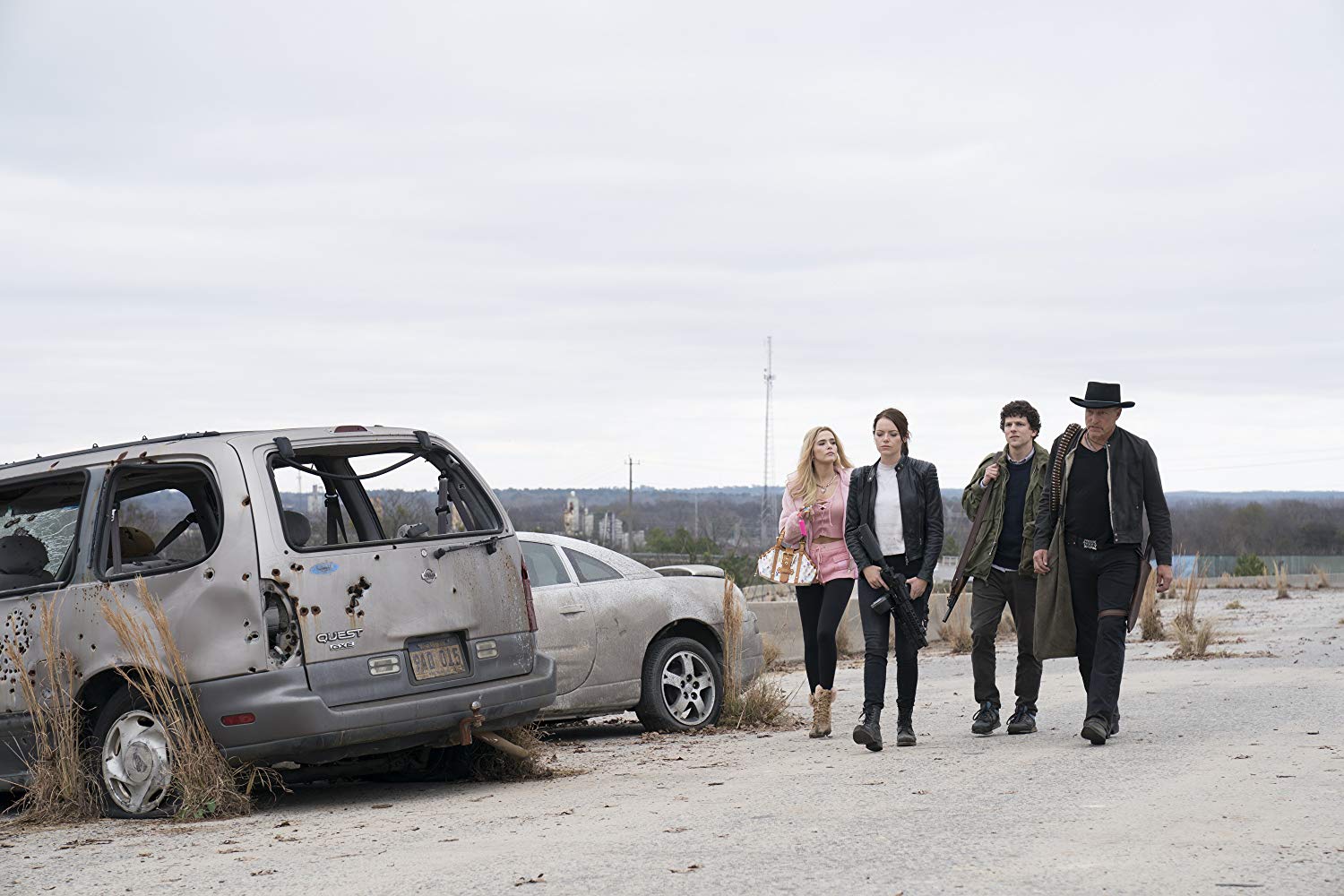 When Zombieland was released in 2009, the concept of a zombie satire, although by no means original, at least maintained an aura of freshness. The same is not true in 2019. The intervening decade has been tough on “serious” zombie movies. As a result, many filmmakers have opted to take the route traveled by director Ruben Fleischer (who, in between Zombielands, made Gangster Squad and Venom), resulting in a comedic bent becoming the default tone for a zombie-apocalypse story. Double Tap doesn’t do enough to differentiate it from dozens of other films.

The four principals (plus Bill Murray) are back: tough-talking redneck zombie killer Tallahassee (Woody Harrelson), no longer in search of the perfect Twinkie; his too-earnest, rule-making sidekick Columbus (Jesse Eisenberg); Columbus’ zombie ass-kicking girlfriend, Wichita (Emma Stone); and Wichita’s younger sister, Little Rock (Abagail Breslin). Double Tap opens with them liberating the White House for their personal use. Eventually, growing tired of living it up in the Oval Office by day and the Lincoln Bedroom by night, Wichita and Little Rock take off. During the break, Columbus hooks up with Madison (Zoey Deutch), an airhead he meets at the mall. This creates friction when Wichita returns, sans Little Rock, who is off traveling with the pacifist weed-smoker Berkeley (Avan Jogia). This provokes a rescue road-trip that leads first to Graceland, where Elvis-lover Nevada (Rosario Dawson) runs a hotel, then to Babylon, a post-apocalyptic hippie community that is unable to cope when the zombies come calling. 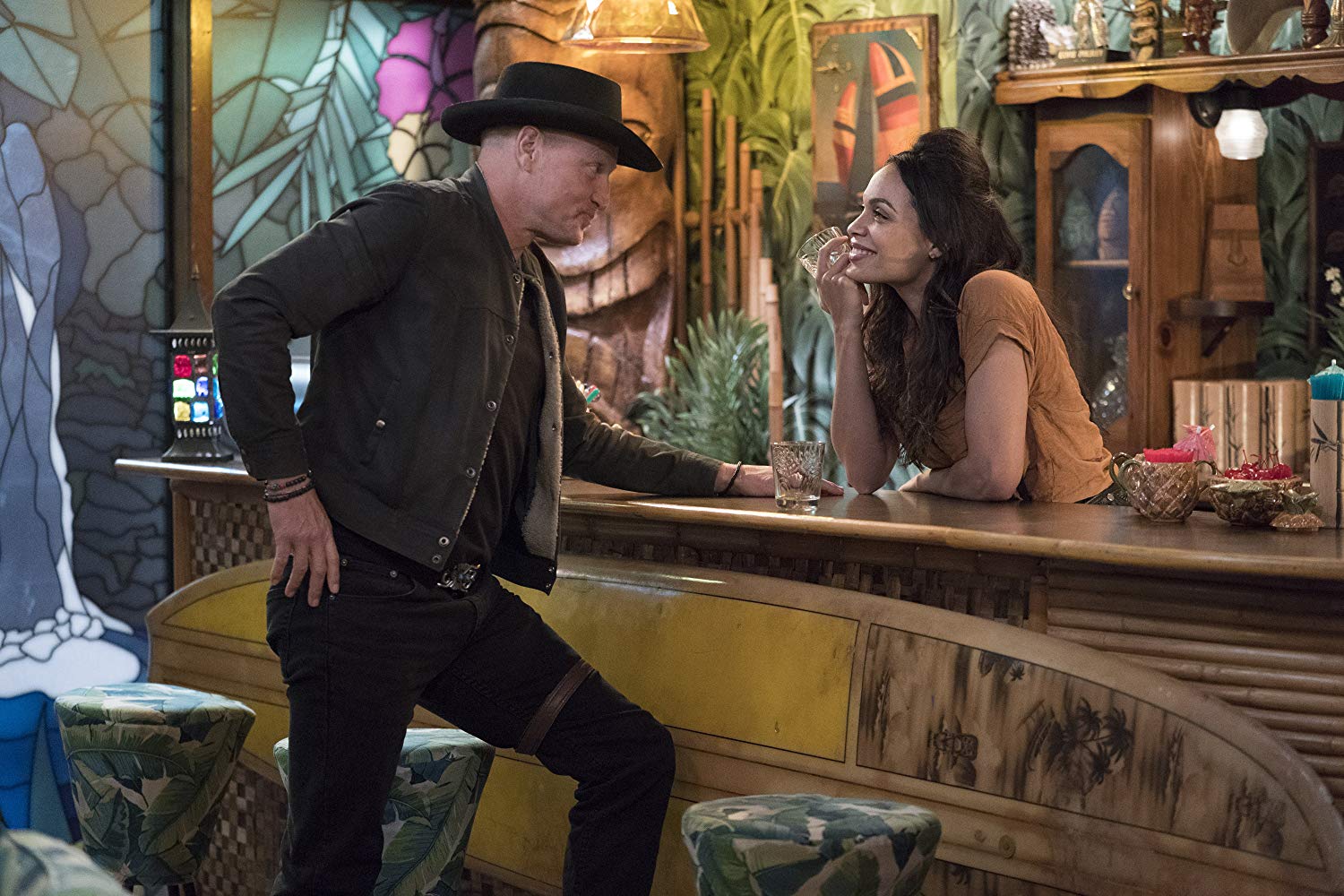 While Rosario Dawson and Zoey Deutch add a little spark to the proceedings, there’s not much meaningful development of the returning quartet, who seem content to go through the motions. In Zombieland, the viewer felt their humanity. That’s not so much the case here, where only Tallahassee gets anything resembling a meaningful arc. A Tennessee meeting with a Tallahassee doppelganger named Albuquerque (Luke Wilson) and his Columbus-like sidekick Flagstaff (Thomas Middleditch) falls flat, failing to deliver the big laughs it sets up. An ongoing gag about the group having to travel in a minivan (instead of something bigger and badder) runs out of gas before the car does.

There are more zombies in Double Tap than in Zombieland but, as was the case in the earlier film, they’re the least interesting element on-screen. They have been subdivided into four categories: the homer (standard dumb brain-eater), the Hawking (smart brain-eater), the ninja (stealthy, don’t-see-it-coming brain-eater), and the T-800 (Terminator brain-eater, no Schwarzenegger accent). They pop up whenever the movie needs an action sequence. There’s little or no horror in Double Tap but that shouldn’t be a surprise. When was the last time anything featuring a zombie was scary? 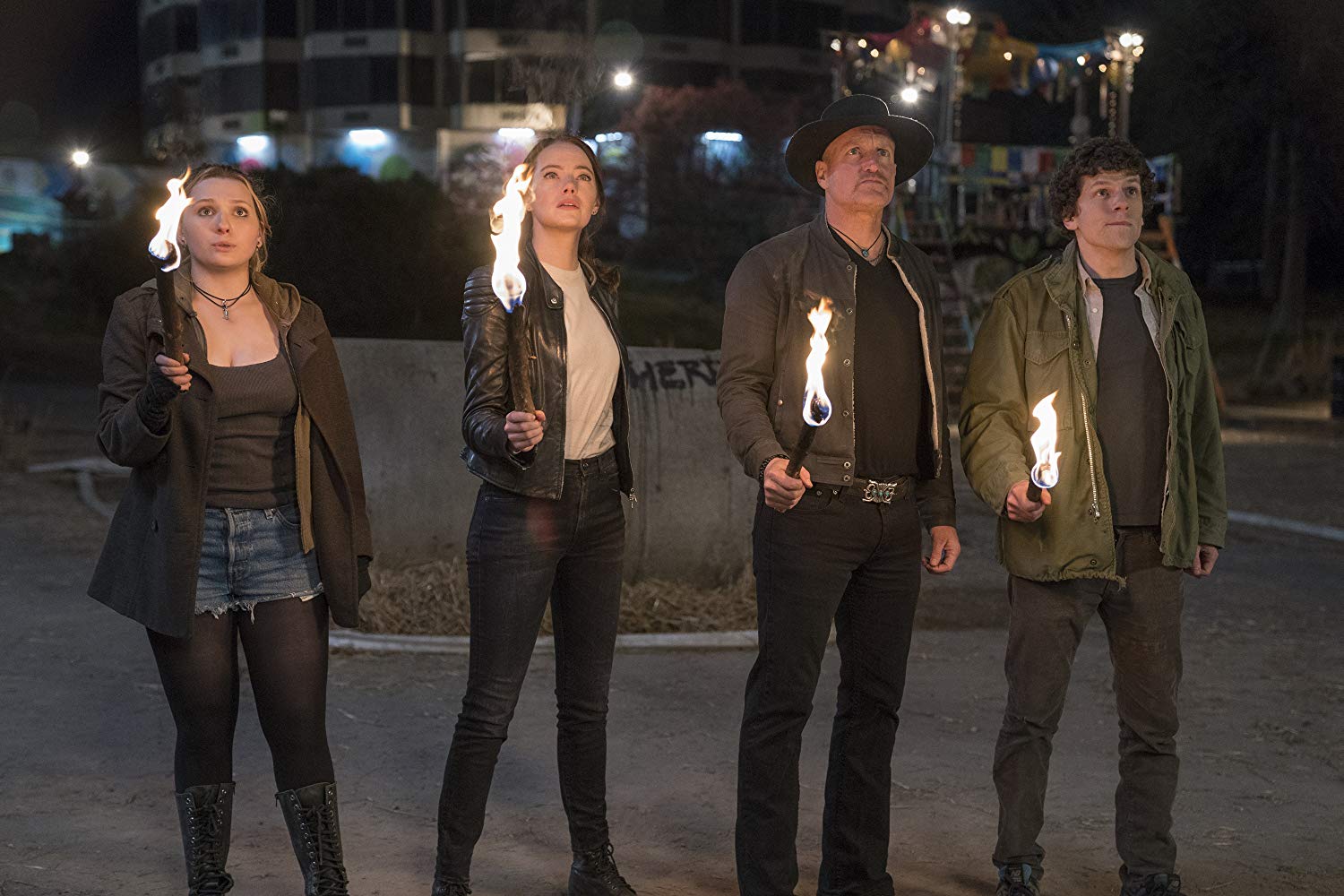 Fleischer loves having words pop up on screen – everything from zombie information to which of Columbus’ rules a particular action illustrates. (Rules include: cardio, always wear seat belts, travel light, etc.) Those were funny and clever in Zombieland. The same isn’t necessarily true of Double Tap, where they seem more like obligatory visual clutter. All of this brings us to the Bill Murray cameo, which is shoehorned in somewhere between the Second Assistant Director and the Gaffer. It’s an odd scene that feels more like a stand-alone short film than a necessary addendum. If you stay through the whole film, be sure not to leave too early.

Double Tap isn’t the first time I’ve been let down by a sequel that feels the need to regurgitate the original rather than moving forward into new territory. I liked the characters more than the setting in the first movie and this installment brings them back for a curtain call. Overall, however, Double Tap raises the red flag flown by many unnecessary sequels: Why bother? Zombie movies – whether comedies or true horror – are passé. Time to let them languish in the grave where they belong.