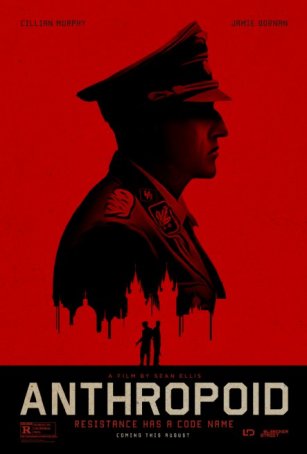 The title Antropoid makes this sound like a monster movie and, if you consider that one of the main characters is Reinhard Heydrich (Detlef Bothe), the infamous “Butcher of Prague”, perhaps it is. Heydrich was arguably the worst of Hitler’s henchman - his third-in-command whose lasting legacy is being the architect of the Fuhrer’s “Final Solution.” The only reason why Heydrich isn’t as well-known as Himmler, Goring, and others is because of the events depicted in this historically-based motion picture. Heydrich not only didn’t survive World War II but he didn’t last until the tide had turned against the Nazis. In 1942, he was assassinated by a group of Czechoslovakian patriots led by Josef Gabcik (Cillian Murphy) and Jan Kubis (Jamie Dornan). That tale, and what happened to those men in the wake of their action, forms Anthropoid’s narrative.

Directed by Sean Ellis (who also co-wrote the screenplay and handled the cinematographer’s duties), Anthropoid is a grim, gritty war movie that tells a side-story of World War II. Most films set during this period focus on better known events and occurrences but Heydrich’s assassination and the subsequent reprisals became important in re-aligning the Allies’ position regarding Czechoslovakia during the second half of the war. Although Anthropoid can be seen as chronicling a daring and decisive act of selfless heroism, it’s also an illustration of how ruthless the Nazis could be. This isn’t one of those movies interested in humanizing the SS. The brutality of one particular torture scene is difficult to watch. And there isn’t a “good” or sympathetic German to be found between the opening credits and the closing ones. 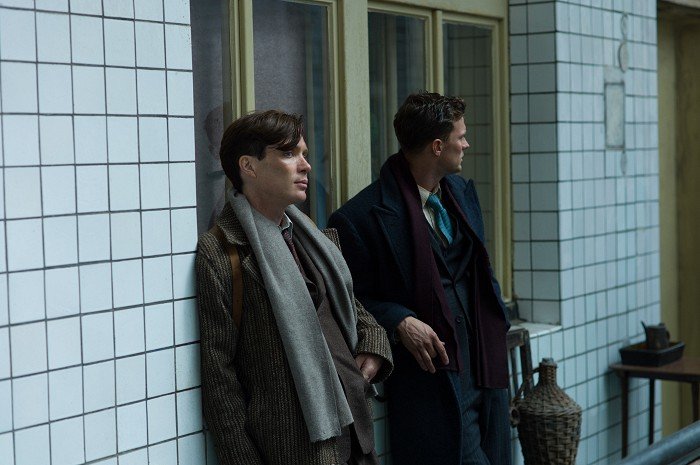 Anthropoid features a fair amount of action, most of which occurs during the second half, but none of it is of the “rah-rah” variety. Especially for those who don’t have a good grasp of the historical record, there are some white-knuckle moments. These are doomed characters fighting not to win but to take down as many of the enemy as possible. It’s their Alamo. Ellis takes some dramatic license with the number of deaths attributable to the protagonists but, other than that and a few other details, the film is faithful to the factual record.

Anthropoid takes a while to get going, mainly because of the volume of exposition the screenplay has to wade through before getting to the meat of the story. In addition to setting up the situation, it has to introduce the characters and explain their plan. After an uneven first 30 minutes, however, things become increasingly compelling. The movie builds - something infinitely preferable to a bold, brash beginning followed by a descent into anti-climax.

Ellis is able to affect a strong sense of verisimilitude. Sets were built using detailed plans and photographs of the actual places and, in some instances, filming occurred in the original locations. Like the characters, Prague isn’t romanticized. It’s a beaten-down city with the Nazi boot planted firmly on its throat, choking the life out of it. Although the viewer isn’t likely to sympathize with the betrayer, it’s hard not to understand his motives. 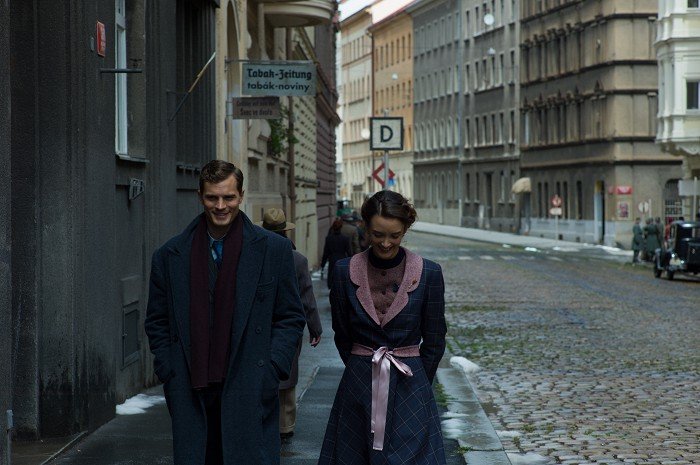 The two leads, Cillian Murphy and Jamie Dornan, are experienced actors but not instantly recognizable faces (although Dornan, by virtue of his role as Christian Grey, may be getting there). I have often felt that fact-based war movies often work better with lesser known actors in major roles. One of the problems with Valkyrie was that it was difficult to get past Tom Cruise (although Brad Pitt in Fury could provide a counter-argument). Here, Murphy and Dornan disappear into their characters.

Although Anthropoid tells of a triumph, it’s a victory that ultimately feels more like a defeat because of the crushing repercussions that come in its wake. The characters are fully aware that this will happen and that, if they succeed, thousands will die as a result. But they weigh the “greater good” against the price and do what they believe is right. History has judged them as having acted courageously but, if Germany had won the war, they would have been viewed as murderers and terrorists.

Anthropoid is engrossing but it isn’t happy. War movies, at least the best of them, seldom are. It shines a light into a lesser-known corner of the huge chamber that contains all of the World War II stories and informs in addition to entertaining. The audience is limited but for those who appreciate this sort of motion picture, Anthropoid is worth seeking out.