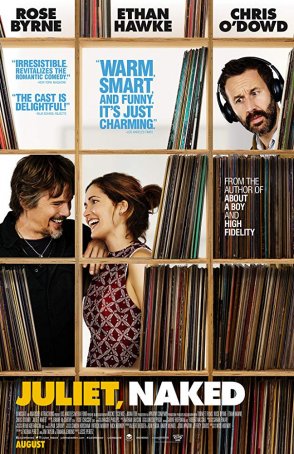 What’s in a name? It would be disingenuous to assume that Nick Hornby was ignorant of the titillation value of calling something “Juliet, Naked.” However, to be clear, there’s nothing prurient about the movie. The title refers to a song written by one of the characters and should not in any way be associated with an expectation of T&A. In fact, there’s no nudity in Juliet, Naked. If not for some salty language, this could easily have garnered a PG-13 rating. Although not quite “wholesome,” it isn’t far off. An unevenly paced but ultimately winning romantic comedy, Juliet, Naked is the latest success based on a Hornby novel, joining Brooklyn, High Fidelity, About a Boy, and Fever Pitch. The film’s director, Jesse Peretz, is relatively new to feature films but has a lengthy TV and music video resume. Judd Apatow is on board as a producer; this seems like the kind of movie that would attract his interest.

Ethan Hawke plays Tucker Crowe, an indie rock star who vanished in the middle of a concert, never to be heard from again. (Shades of Eddie and the Cruisers?) Tucker has left behind a catalog and a small-but-loyal fanbase who are devoted to keeping his legacy alive and debating minutia about his life and songs. Chief among them is Duncan (Chris O’Dowd), an aging professor whose Tucker-obsession knows no bounds, much to the chagrin of his girlfriend, Annie (Rose Byrne), who is tired of playing second fiddle to his one true love. When he has an affair (then confesses it as a means to make himself feel better), Annie has had enough. Around the same time, she receives an e-mail from none other than Tucker, congratulating her for “getting it right” in a scathing review of his song “Juliet, Naked” that she posted on Duncan’s Tucker fan site. 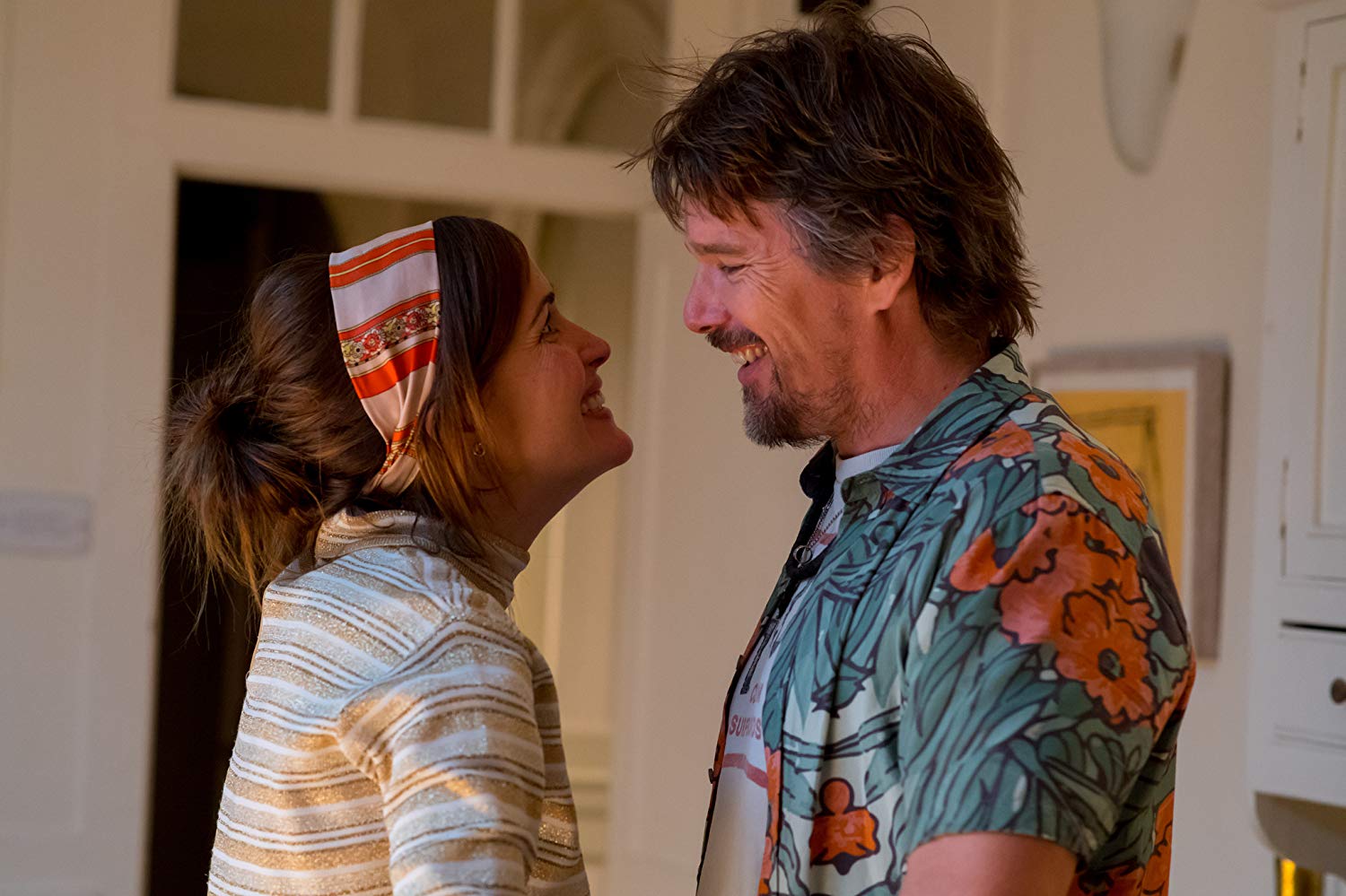 The low-key romance between Tucker and Annie begins casually enough. He’s in the U.S. and she’s in the U.K. so they content themselves with back-and-forth e-mails. A surprising level of intimacy develops, with each telling the others things they have never before revealed to another person. Both are filled with regret. For Tucker, it’s about taking too many chances and leaving behind the wreckage of a life poorly lived. He has five children by four different women. For Annie, it’s about never taking any chances and believing there would be a karmic recompense for doing things the safe way. She most regrets wasting the last fifteen years with Duncan and, in the process, perhaps losing her chance at motherhood.

Eventually, the two meet – there wouldn’t be much of a movie if they didn’t – and fitful sparks fly. The problem with Juliet, Naked is that the film takes in an inordinate amount of time getting them together. Ethan Hawke and Rose Byrne are great together but the movie loses much of the chemistry-generated energy when they’re apart. Unfortunately, that means the first 45 minutes are uneven. Chris O’Dowd’s brand of comic relief works in small doses. He is perhaps a little overexposed, although not to a degree that sinks the production. The character is insufferable but fortunately vanishes for most of the final two-thirds. 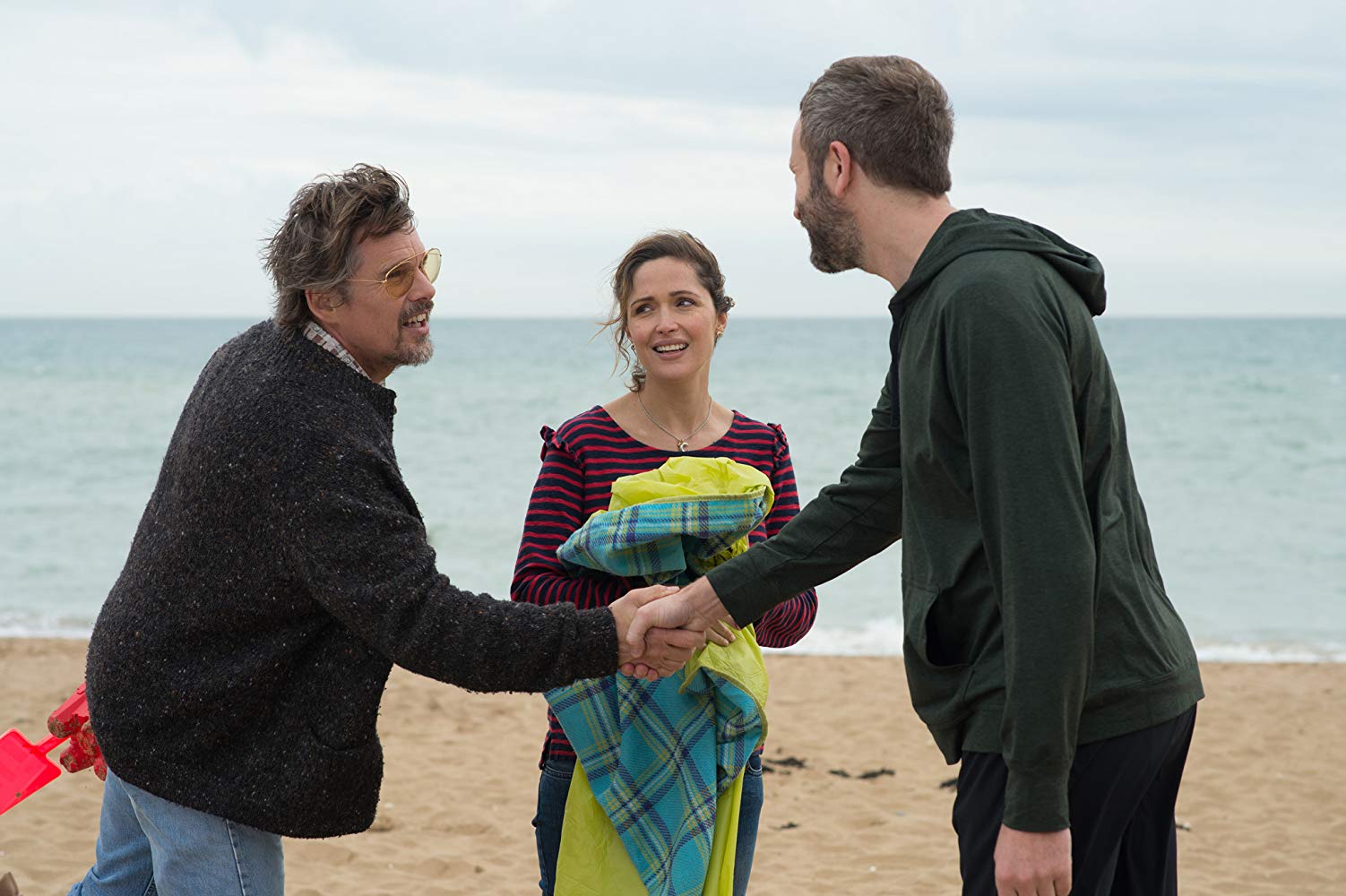 The music is middling. This isn’t one of those films that relies heavily on the soundtrack for its emotional punch. Since Tucker has been retired for decades, he doesn’t have any new material and most of his back catalog is presented in bits and pieces. You can buy the soundtrack if you want to hear the full renditions. (Hawke only does one “live” performance and it’s a cover of The Kinks’ “Waterloo Sunset.”)

Unlike mainstream romantic comedies, this one comes with weightier issues and doesn’t fill up its screen time with inane tangents and dumb jokes. There are laughs but most focus on the absurdity of a character or situation. The romance between Annie and Tucker works because these both feel like lived-in characters who are getting a second chance. There’s isn’t a perfect storybook ending but it feels right and there’s a genuine sense of longing in one of Byrne’s last shots.

Oh, stay at least part-way through the end credits. There’s a brilliant bit of comedy to be found during them in which O’Dowd shines more brightly than he does at any time during the production proper.