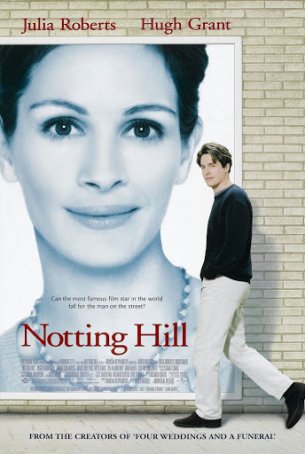 In Western culture, we are obsessed by the concept of celebrity. How else can one explain the plague of paparazzi that descends on public figures when they make appearances, or the popularity of gossip magazines and TV shows? Celebrities are like royalty - glamorous and untouchable, they become objects of unreasonable adulation. Perhaps one of the most common fantasies entertained by an "average" man or woman is what would happen if someone famous fell in love with them. And therein lies the premise of Roger Michell's new romantic comedy, Notting Hill.

Hugh Grant plays William Thacker, the owner of a small bookstore in London's Notting Hill (described as "a small village in the middle of a city"). He's an average Joe - when he's not working, he spends time with his friends and his wacky Welsh flat-mate, Spike (Rhys Ifans), but has no romantic life to speak of. One day, however, the bedrock of his existence shifts when Anna Scott (Julia Roberts), the most famous actress in the world, walks through the door to his little shop. In London to publicize her new film, Helix (described as "Close Encounters meets Jean de Florette"), she's taking a break from the press, and Notting Hill seems like a good place to lose them. Later, William literally runs into her in the street, spilling orange juice all over her. Chagrined and embarrassed, he invites her to his place to clean up. Much to his surprise, she accepts his offer, and, after changing outfits, she gives him a lingering kiss on the lips. William is immediately smitten and so, apparently, is Anna. Thus begins a tempestuous relationship that asks whether a star can live happily ever after with someone who has never had his face in the papers. Although Notting Hill is a pleasant enough motion picture, it isn't much more than that. It's a tame movie that takes few chances. Even the casting of Hugh Grant and Julia Roberts is an example of playing it safe, since both are proven box office draws. (Wouldn't it have been more interesting to cast an unknown as the male lead?) The comedy, while sporadically funny, occasionally feels forced and unnatural, as if screenwriter Richard Curtis (Four Weddings and a Funeral) was compelled to ratchet up the level of humor at the cost of characters' credibility. Spike is a case in point. As portrayed by Rhys Ifans, he's the constant butt of jokes (literally and figuratively), but he serves little purpose beyond that. He's a pure caricature of a bawdy slob, and, whenever he comes on screen, he becomes a distraction. Did I laugh at him? Yes. Would the movie have been better without him? Probably.

Another problem with the film is that the romance is tepid. While there's a feeling of companionability and even affection between William and Anna, I never sensed any passion. These two seem more like brother and sister than lovers separated by an army of publicists and photographers. The plot follows the expected beat of a traditional romantic comedy: boy meets girl, boy likes girl, boy and girl get to know each other, then complications interfere. In this case, those complications come in the form of Anna's off-again/on-again boyfriend (Alec Baldwin) and the media. 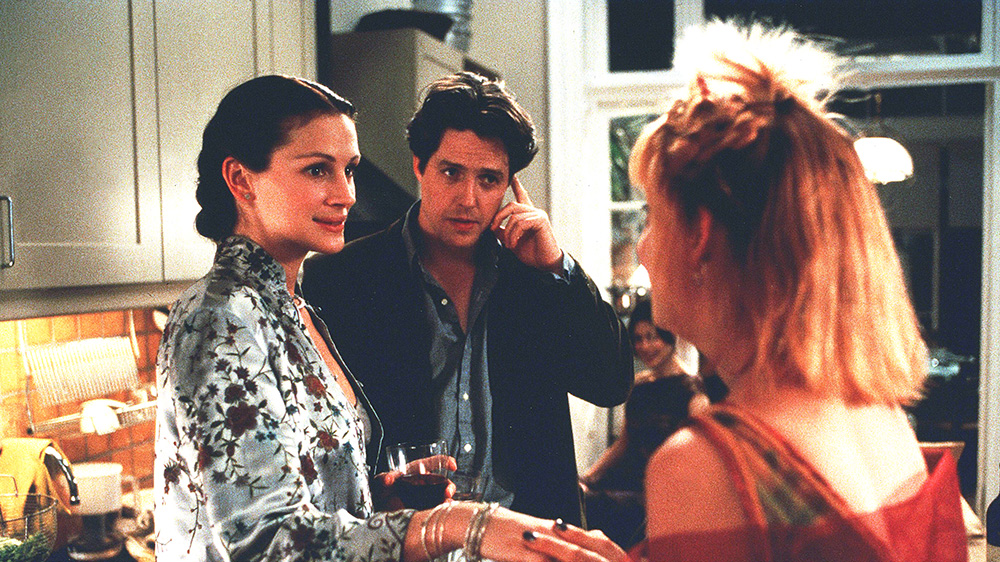 Getting Roberts to play Anna is a case of perfect casting, and one has to wonder whether she felt a sense of déjà vu going through scenes where her character is grilled and hounded by the press. Roberts is one of a few actresses who can be luminous in almost any role, and, although her wattage is dimmed by Notting Hill's curiously muted tone, she's still the central attraction. Hugh Grant, on the other hand, seems to be sleepwalking through his part, relying on his "aw shucks" charm and boyish good looks (although the crow's feet are starting to show around his eyes) to get by. He's very good at dropping the self-deprecating one-liners, but, other than that, there's not much to the performance. He is constantly being upstaged by supporting players, particularly Ifans and Emma Chambers, who plays William's ditzy sister, Honey.

Notting Hill is not without its pleasant moments. The relationship between two of William's friends, Max (Tim McInnerny) and Bella (Gina McKee), is touching. There's a titillating conversation between William and Anna about why men are attracted to breasts. (I couldn't help wondering what Quentin Tarantino would do with that dialogue...) And there's an interesting shot of William walking down a street in Notting Hill as the seasons change around him. I don't think I've ever seen a transition sequence done quite that way before.

Ultimately, the success or failure of Notting Hill will be determined by whether viewers buy the central relationship. And, while there's something there, it's not really enough to fill up a two-hour movie. As an antidote to big budget, effects-driven films, Notting Hill does an adequate job, but this isn't one of those landmark romantic comedies that dozens of subsequent movies will seek to emulate.