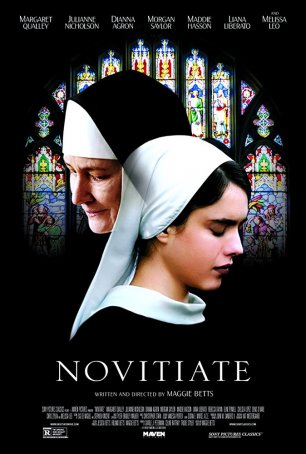 Perhaps the most remarkable thing about Novitiate is the even-handedness with which it treats religion in general and 1960s era Catholicism in particular. Set mostly within the confines of a convent, the feature debut of writer/director Margaret Betts takes pains to neither demonize nor lionize cloistered existence. The film presents the nuns – from the Reverend Mother (Melissa Leo) to the protagonist, a novitiate named Sister Cathleen (Margaret Qualley) – as people with their own inner insecurities and conflicts. From sexual attraction/frustration to spiritual uncertainty, a wide variety of crises are examined. All of this happens against the backdrop of initiating the Vatican II reforms, which the Reverend Mother believes will destroy the church she loves. As a side-note, Novitiate has a rare distinction: almost the entire cast and crew is female, with nearly every major behind-the-scenes role (director, writer, producers, cinematographer, and editor) filled by a woman. Given the strong female voice of the story, this would seem to be an ideal approach. 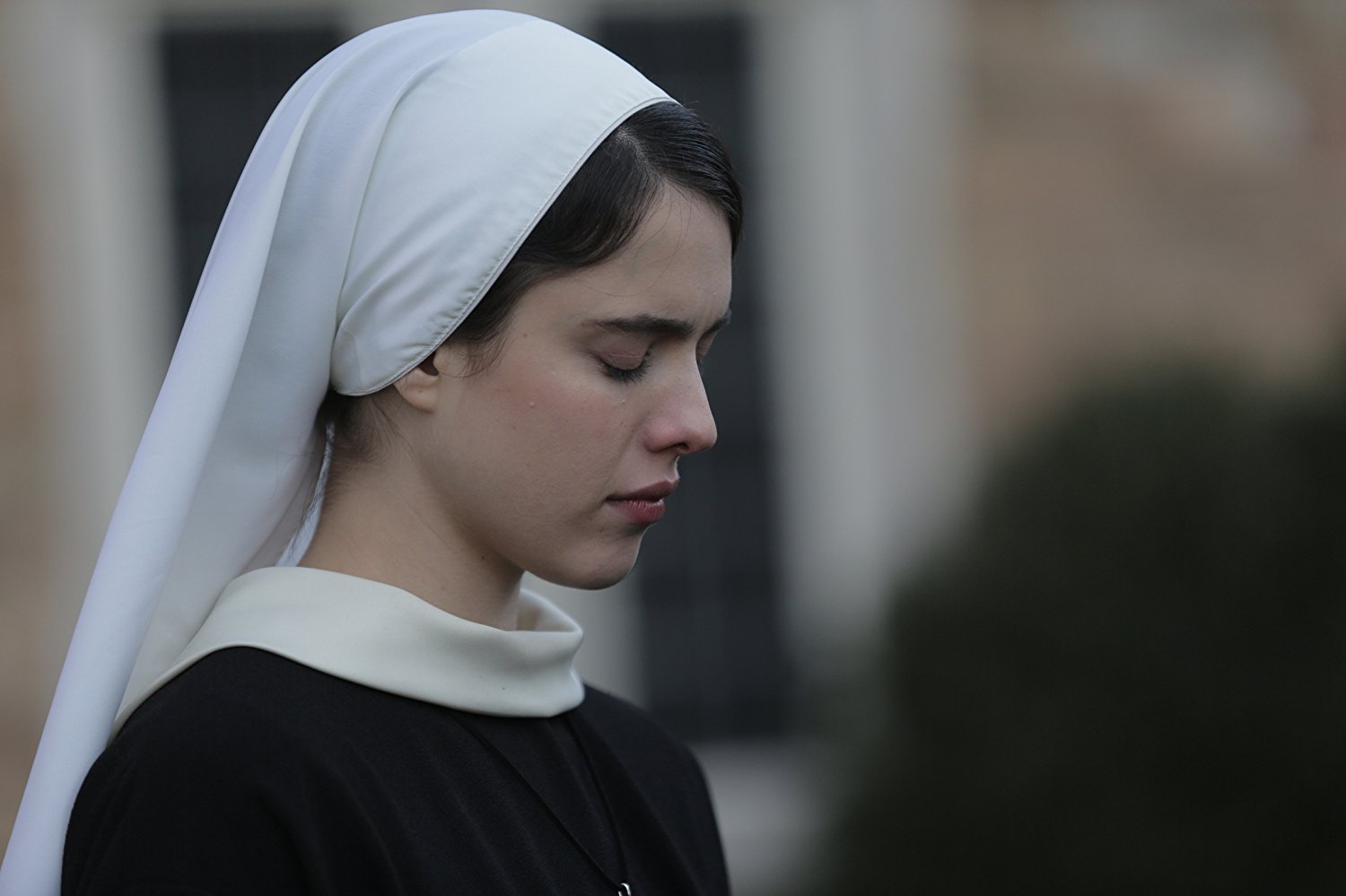 In 1954 at the age of seven, Cathleen is taken to church by her agnostic mother, Nora (Julianne Nicholson), for the “experience.” Cathleen is fascinated and finds the experience positive. Five years later, she is offered a scholarship to attend a local all-girls Catholic school. By the time she’s ready to graduate at the age of 17, she has decided to become a nun – much to Nora’s despair. She enters a convent and passes through a period of postulancy, confirming the legitimacy of her calling, before becoming a novitiate. As she prepares to take her final vows, Cathleen struggles with matters of faith and develops an intimate relationship with another sister, Emanuel (Rebecca Dayan), while becoming one of the Reverend Mother’s favorites.

The film’s emotional component comes from Cathleen’s experiences and struggles. This is not like The Magdalene Sisters, the 2003 film set in a 1960s Irish girls school (run by nuns and priests) that focused on the brutalization of women in a strict Catholic environment. Even the sternest character in Novitiate (the Reverend Mother) is developed beyond the level of a stereotype, being shown to have a human soul capable of good and ill. At one point, in a voiceover, Cathleen gives an impassioned defense of why she has chosen the life of a nun, acknowledging what most people think about cloistered women while explaining that her reason is that she fell in love…with God. The ugly relationship of her parents has something to do with it as well. With their interaction as a model for marriage, one can understand the appeal of celibacy. 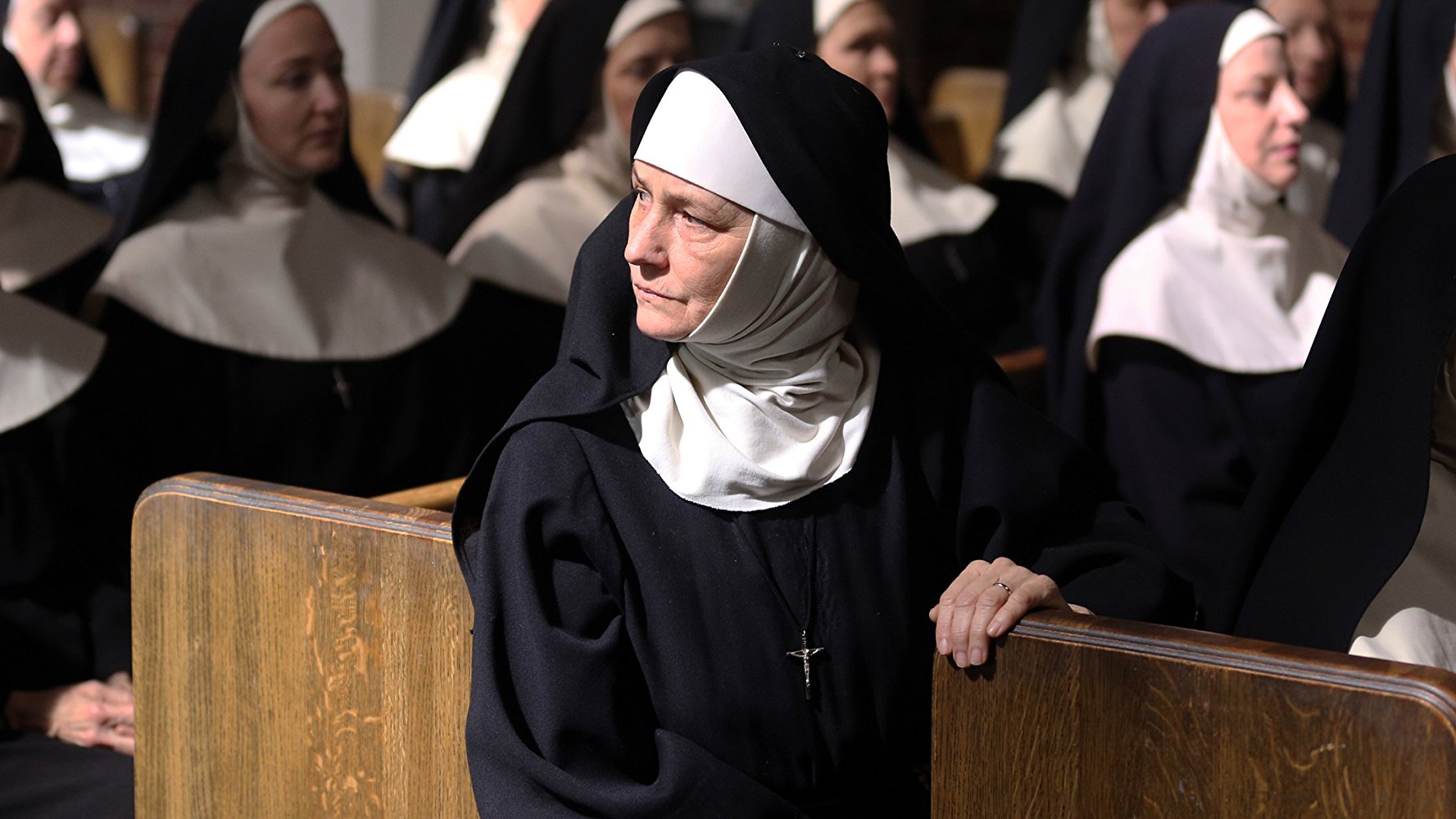 As strong as Cathleen’s story is, arguably the most unique aspect of Novitiate relates to the impact of adopting Vatican II reforms on the convent. The scene in which the Reverend Mother reads a letter describing the changes illustrates the sense of betrayal felt by the nuns in the room (and perhaps, by extension, across the world), especially the older ones. While Vatican II was applauded by most Catholic laypeople and garnered a mixed reaction from priests, this is the first time I can recall having seen a dramatization of its impact on nuns.

Margaret Qualley gives a breakthrough performance as Cathleen – a young woman whose initial pure faith is put to the test when she suffers doubt and finds herself attracted to another sister. The lesbian angle is not overplayed. The sex scene is brief and discreet and leaves much to the imagination. This isn’t about reinforcing stereotypes. Qualley and her partner in the relationship, Rebecca Dayan, play the “romance” believably. Meanwhile, Melissa Leo (force of nature that she is as an actress) makes the Reverend Mother a commanding presence.

By avoiding the temptation to rail against religion and instead offer an introspective and respectful look at it, Novitiate becomes that rare thing: a movie willing to show the flaws of Catholicism without dwelling on its negatives. It understandably won Margaret Betts a Special Jury Prize for Breakthrough Director at the 2017 Sundance Film Festival. With an appealing cast and a fly-on-the-wall perspective, Novitiate offers an absorbing two hours.