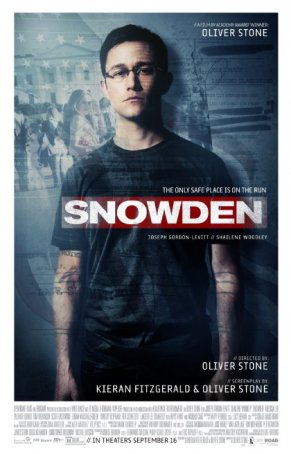 Few would debate that the story of Edward Snowden’s life is as compelling as it is controversial. Based on Oliver Stone’s biopic, Snowden, it would also seem to be inherently non-cinematic. By opting to go with a straightforward account of the title character’s adult years (spanning a roughly ten year period from the early 2000s until 2013) rather than a more innovative approach, Stone provides what amounts to a big-screen Wikipedia article. For a director whose reputation is built on aggressively in-your-face subjects and styles, Snowden stands as a strangely inert outlier, a project that lacks passion although not perspective.

Stone is a left-leaning filmmaker and his political viewpoint often informs his work. Snowden is no different. The movie is not inherently dishonest but, like all films that promote a specific outlook, it ignores some “inconvenient” facts that don’t fit the narrative. Unlike JFK, however, which created an alternative history in order to accommodate the wild conspiracy theories of Jim Garrison, Snowden stays grounded. If it’s guilty of anything, it’s making the lead character too noble. But this isn’t meant to be an objective biography; it’s intended to tell Snowden’s side of the story, which has been largely ignored by the media. And, although its presentation of Snowden may be too good to be true, it makes some salient points about his importance to recent history and the technology he exposed. Right or wrong in how he obtained the information, his efforts put him closer to the “whistleblower” category than the “traitor” one. We may not agree with Snowden’s methods but, in an “end justifies the means” scenario, it’s hard to argue with his results. 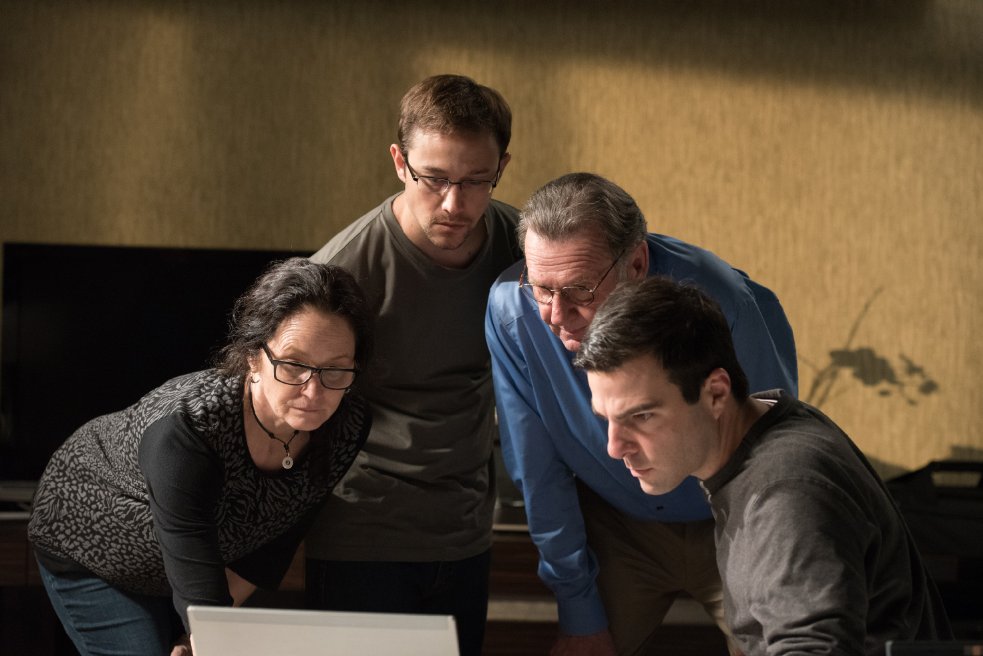 Snowden’s wraparound story transpires in June 2013 with the protagonist (played by Joseph Gordon-Levitt) holed up in a Hong Kong hotel dispensing thousands of classified NSA documents to journalists Laura Poitras (Melissa Leo), Glenn Greenwald (Zachary Quinto), and Ewen MacAskill (Tom Wilkinson). During his interview with the two men and one woman, his reminiscences about the past result in flashback accounts of key moments in his life. These include his 2004 Marine basic training; meeting his long-term girlfriend, Lindsay Wills (Shailene Woodley) in a café following an on-line flirtation; interactions with his CIA mentor, Corbin O’Brian (Rhys Ifans); growing misgivings about the “Big Brother” aspects of the NSA and CIA’s surveillance; and his eventual decision to take action to make the public aware of the situation.

Stone tries, with limited success, to imbue the Hong Kong portions of the movie with thriller characteristics. However, since anyone with knowledge of current events will be aware of the end game, there’s not much suspense here. The film regurgitates things that were presented in a more compelling fashion in the documentary Citizenfour, Laura Poitras’ account of her meeting with Snowden. Snowden, despite solid performances from all the cast members, rarely comes to life dramatically. By the end of the film, I felt I had learned a few things about the facts of Snowden’s life but I didn’t know the man and I hadn’t found his story especially interesting. This is a failing in the filmmakers’ choices.

The cast is intriguing but the supporting players leave a more lasting impression than the lead. Joseph Gordon-Levitt intentionally underplays Snowden (apparently a true-to-live approximation) but that makes it easy for him to be upstaged. In the hotel scenes, he’s the least energetic member of the quartet. In the domestic scenes, Shailene Woodley exhibits more passion, and there’s little evident chemisty. Rhys Ifans is a scene-stealer as the frighteningly charismatic Corbin O’Brian, Snowden’s Svengali. In a small part, Nicolas Cage reminds us that, when he’s not desperately chasing a paycheck, he can turn in a good performance. Here, his function is to open Snowden’s eyes to what’s really going on in the CIA think tank. 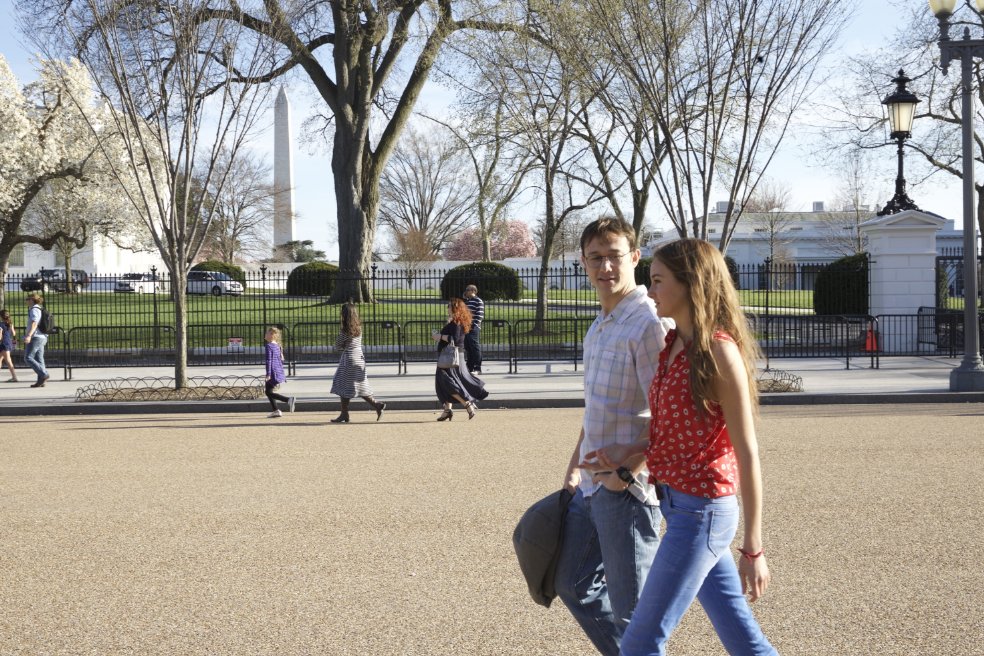 On a practical level, Stone gets some things chillingly right. Snowden’s easy-to-follow explanations of what the NSA can do should set off alarm bells. This really is Big Brother. In one scene, a proprietary search program sifts through billions of personal e-mails, blogs, etc. to identify language that could be deemed threatening toward President Bush. There are also claims that the intelligence agencies can activate any webcam, even one that’s turned off, and track any cell phone. Paranoia about the government’s oversight becomes understandable when one compares what it can do with what Snowden proved it did do. Snowden may not fully succeed in dramatizing all the factors that led to the lead character’s change in perspective (from right-wing patriot to disaffected whistleblower) but it offers evidence about how amoral and ruthless the government can be when acting out of self-preservation. Intelligence agencies don’t exist to protect citizens; they exist to protect their own secrets.

The film concludes with an intriguing switcheroo. In the final scene, as Snowden is speaking, a laptop cover briefly obscures his face as the camera passes in front of it. In that moment, actor Joseph Gordon-Levitt is replaced by the real Edward Snowden. Anyone wondering what the movie’s subject would think of Stone’s recreation of his life is left with no doubt. While Snowden’s endorsement stacks the deck politically, it doesn’t diminish the importance of the man’s revelations as presented here. Snowden could have been an important film. It certainly contains important elements. Sadly, unlike its subject, it’s unremarkable and easily forgotten.