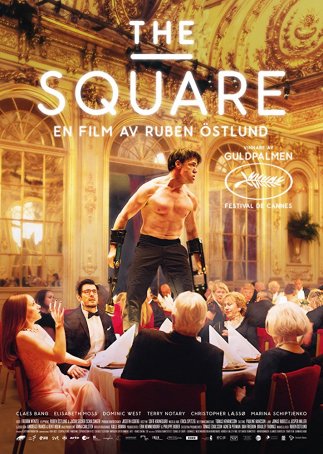 The Square is an indicator that not only Hollywood blockbusters can be afflicted with bloat. At nearly 2 1/2 hours in length, this production takes what could have been a lean, incisive satire of art, commerce, and altruism and turns it into an endurance contest. The interminable setup and unfocused ending bookend an otherwise engaging experience but the good parts of The Square – and there are quite a few of them – can’t overcome the weaknesses, making this a decidedly mixed bag. The movie, which features numerous dead-end side-stories and glaring plot holes, is short on narrative and long on allegory.

The first 45 minutes of The Square are turgid and unengaging. Although some degree of background is necessary to get things going, Swedish director Ruben Ostlund (Force Majeure) takes his time introducing the main character, modern art gallery curator Christian (Claes Bang), and setting up the various issues defining his life. At work, he’s busy establishing a marketing campaign to highlight a new exhibit called “The Square” (which, as the title implies, involves a square, the pompous purpose of which is to form “a sanctuary of trust and caring”). Away from work, he’s playing an amateur detective in tracking down the pickpockets who lifted his wallet and cellphone while he was distracted out on the street. 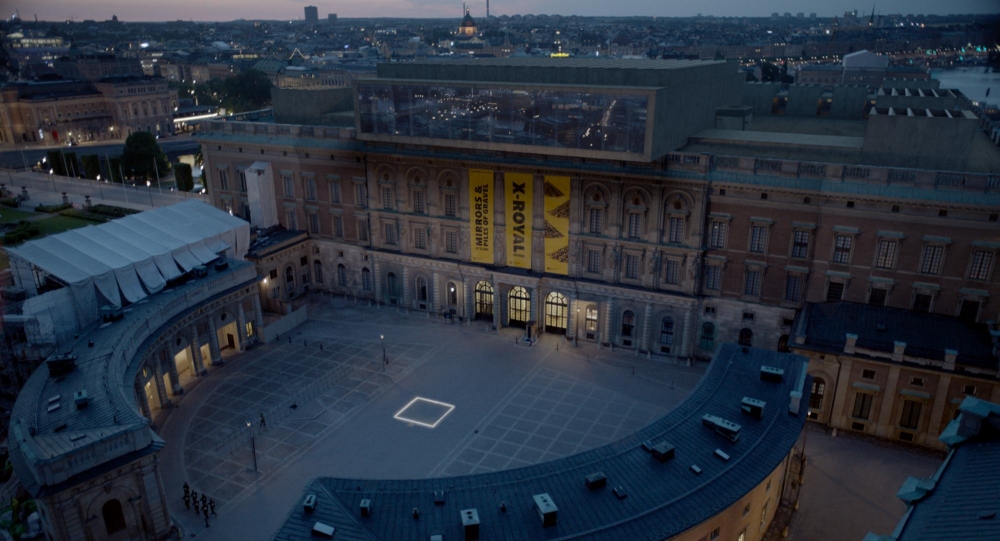 By the one-hour mark, The Square has settled into a nice rhythm of social satire and low-key drama. Ostlund’s #1 target is the art scene (or what passes for it). One exhibit in Christian’s gallery is a series of gravel piles laid out across the floor of a room. When a cleaning crew accidentally scoops up some of the loose material, a panicked underling approaches Christian. After asking her two questions (“Do we have the gravel?” and “Do we have photographs of the exhibit?”), he proposes that they rebuild the mounds as they were and no one will be the wiser.

Then there’s the outside marketing company hired to promote “The Square.” In their zeal to create something guaranteed to go viral, they employ some “outside the box” thinking that results in a highly inappropriate YouTube video. Ostlund is making a serious point about the difficulties of generating interest in art and the genesis of this campaign, although bitingly funny, also seems plausible. In the end, what is the barometer of success: the number of pageviews, the number of outraged engagements, the people who show up to see “The Square”, or something else?

Despite working on a project that advocates utopian ideals of caring and sanctuary, Christian doesn’t practice these in his real life. He’s stingy, self-serving, and emotionally unavailable. After having sex with a woman, he refuses to let her dispose of the condom, afraid that she might impregnate herself with the sperm. Later, when she corners him and asks him if he can remember her name, he dithers before finally coming up with it. He also has two children that we don’t find out about until midway through the film when their mother dumps them at his apartment for a visit.

Perhaps the most incomprehensible and disturbing sequence in The Square involves a dinner when Christian’s latest promotional idea – a man pretending to be an ape – goes awry. The actor gets so deep into the role that it results in a freakishly genuine performance that no one, not even Christian, can stop. This may be intended as a counterpoint to an earlier scene in the film where a real-life chimpanzee is shown sauntering around a woman’s apartment. This combination of satire, weirdness, and offbeat drama is sufficient to make the middle portion of The Square engaging, if not compelling. Unfortunately, toward the end, the screenplay slides into the realm of sermonizing as it offers a lecture about how it’s bad to stereotype based on economic situation. There’s also a half-baked argument about freedom of speech that ignores some basic tenets of that right.

The Square stars Danish actor Claes Bang as Christian. His nuanced performance makes some of the duller stretches bearable. Physically, Bang is a cross between the To Kill a Mockingbird­-era Gregory Peck and Jon Hamm. He has a gift for deadpan humor and is able to handle the quasi-dramatic sequences. The diverse supporting cast includes American actress Elisabeth Moss (who curiously starred opposite Hamm in Mad Men) and The Wire’s Dominic West. Gymnast and “movement choreographer” Terry Notary plays Oleg, the method actor who goes full ape.

The Square demands patience and, unfortunately for those willing to supply it, the rewards may still not be at the level one might hope for. Still, it’s a quirky, offbeat production and its best episodes are strangely engaging. The length, however, is a barrier – one that will be insurmountable for some potential viewers.