The mention of Pinocchio generally stirs up memories of the 1940 Disney animated feature, which (at the time) was the greatly anticipated follow-up to 1937’s Snow White and the Seven Dwarves. Today, Disney’s Pinocchio is regarded as one of the studio’s golden age classics and many viewers are unaware that it is based on a book: Carlo Collodi’s 1883 children’s story. In order to make the material more family-friendly, Disney made some changes (softening the Pinocchio character and adding/expanding Jiminy Cricket) but left most of the foundational story blocks intact. Although there have been other attempts to adapt Pinocchio, including two starring Roberto Benigni – one where he played the title character in 2002 and another with him as Geppetto in 2019, and another from Disney in 2022 that featured Tom Hanks as the woodworker, Guillermo Del Toro’s Pinocchio is the first fully animated interpretation since 1940.

Del Toro’s re-imagining of Pinocchio strays farther from the source material than Disney’s landmark 20th century version. While Disney did minor pruning to make the story palatable to mass audiences, del Toro goes beyond that, crafting a tale that is sufficiently different from any predecessors to warrant its existence. Gone are scenes related to Donkey-Pinocchio. Added is an aspect about the marionette’s immortality and the spirit who converses with him every time he dies. The narrative also re-invents what it means to be a “real live boy” while at the same time incorporating aspects of fascism into the tale. (The film transpires between WW1 and WW2 and features a “cameo” by Mussolini.) Del Toro retains the material with the sea monster/whale and Pinocchio’s nose still grows when he tells a lie. The cricket, here named Sebastian, is closer to Jiminy than the ghostly apparition in the book, although Ewan McGregor (who provides the voice) never sings “When You Wish Upon a Star” for obvious reasons.  If he had, it would have been better than the dreadful original songs penned for this movie. 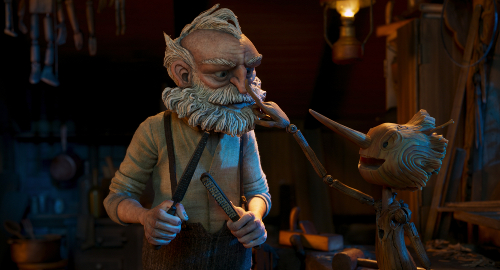 Many of the story beats are familiar and, if not taken directly from Collodi’s prose, at least fit well into “established” Pinocchio lore. The woodworker Geppetto (David Bradley), creates a marionette to fill the void left by his young son, Carlo, who died during a World War I bombing raid. A fairy (Tilda Swinton) hears his wish and, breaking fairy rules, imbues Pinocchio (Gregory Mann) with a soul. The resulting “real live boy” is not what Geppetto might have hoped for: he’s mischievous, curious to a fault, and a magnet for trouble, catching the attention of the village priest (Burn Gorman), who believes him to be the creation of the Devil, and a Nazi official who sees him as a possible “ultimate weapon” in war. Pinocchio is eventually lured away to join the circus by the silver-tongued Count Volpe (Christoph Waltz), who most definitely does not have the marionette’s best interests at heart. When Geppetto goes after his wayward creation, his journey across water comes to a shocking end when his ship is swallowed whole by a monstrous sea creature. His reunion with Pinocchio occurs later in the belly of the beast. 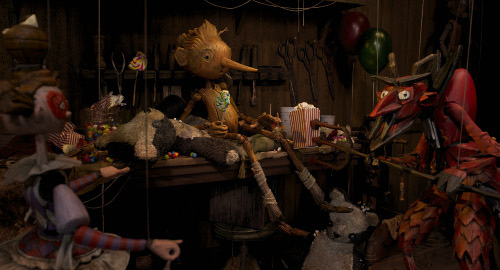 There’s no questioning that Guillermo Del Toro’s Pinocchio is visually arresting. The film’s stop motion animated aesthetic lends a quirkiness to the proceedings that one doesn’t find in photo-realistic projects. The richly detailed backgrounds and smoothness of motion illustrate the use of the latest technology to achieve an upgrade to a traditional look. Character design is unique. This Pinocchio looks nothing like the familiar one we were introduced to in 1940 and Geppetto is reminiscent of Belle’s father in Beauty and the Beast. The voice acting is strong, with participation from such notable talent as Ewan McGregor, David Bradley, Ron Perlman, John Turturro, Cate Blanchett, Tilda Swinton, and Christoph Waltz. If there’s one negative, it’s the pointless and forgettable songs (nine of them) that seek to add a musical element to a movie that would have been far better without them.

I can make a compelling case that this is the best version of Pinocchio to-date, and that includes the Disney classic. Although the 1940 landmark may work better as pure family fare, this slightly more mature film (which is by no means child-unfriendly) is artistically and narratively superior. I have never been a big fan of Pinocchio so I came to this iteration with some reluctance. I’m glad I gave it a chance because it represents one of the most accomplished animated films of 2022.