1940’s Rebecca was the only Alfred Hitchcock-directed film to win a Best Picture Oscar. Considering the filmmaker’s incredible body of work, that may seem odd, but it’s as much a testimony to the popularity of the source material, Daphe du Maurier’s 1938 gothic romance. Over the years, there have been countless adaptations of Rebecca – many of them quite good – ranging from Orson Welles’ radio play to the 1940 film to various TV movies/mini-series (which, over the years, have featured the likes of James Mason, Jeremy Brett, Charles Dance, and Diana Rigg). Of the more than 15 novels du Maurier wrote over her 40-year career, none was more beloved than Rebecca.

Because it has been more than two decades since the last version of Rebecca (a 1997 British TV/Masterpiece Theater mini-series), Netflix has decided it’s time to give the current generation its “own” version. The result is a capably mounted, nicely photographed, and well-acted retread. There’s nothing in this version of Rebecca to cause it to stand out from its crowded field of predecessors but, due to the strength of the novel (to which it is reasonably faithful), it holds the viewer’s interest and will likely maintain an aura of suspense and mystery for those unfamiliar with the story.

The film is cleanly divided into two sections. The first, which transpires in Monte Carlo, is constructed as a fairly straightforward period romance. The second, which occurs at the Cornwall estate of Manderley, is a gothic melodrama/mystery. Director Ben Wheatley (High-Rise) uses a different tone/approach for each of the segments. The Monte Carlo scenes are presented with bright colors and a lush backdrop; the Manderley sequences are darker and starker. From a narrative and stylistic perspective, the first half of the film is considerably less successful than the second. Wheatley is clearly more in his element when crafting something grim and disturbing – his preference seems to be nightmares over dreams. 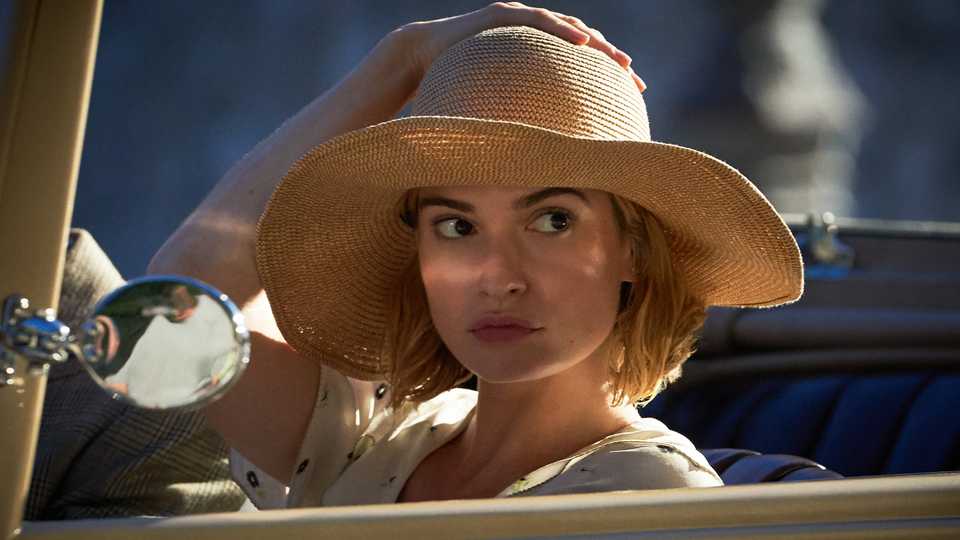 When we meet the unnamed protagonist (played by Lily James), she is working as a “companion” to a rich old American woman. In an encounter that could almost be called a “meet cute,” she comes to the attention of the wealthy widow, Maxim de Winter (Armie Hammer). A whirlwind romance ensues which ends in a marriage – the lead character now has a name: the second Mrs. de Winter. At this point, we know little about her predecessor, the first Mrs. de Winter, except that her name was Rebecca and she was apparently the love of Maxim’s life. But she is no more and the new (happy) couple, following a honeymoon, arrive at Manderley. And that’s where things start to go very, very wrong.

Gone is the loving, romantic Maxim, instead replaced by a brooding man given to outbursts of temper. Mrs. Danvers (Kristin Scott Thomas), the housekeeper, remains devoted to Rebecca and jealous of anyone who would attempt to replace her late mistress. She works to undermine the second Mrs. de Winter at every opportunity, although she always does so with great subtlety and underneath the veneer of being helpful. But there’s a mystery at the heart of the Manderley dynamic and, even as she regrets having participated in the impetuous and ill-advised marriage to Maxim, Mrs. de Winter begins to uncover clues that indicate Rebecca’s death might not have been the boating accident it was alleged to be. 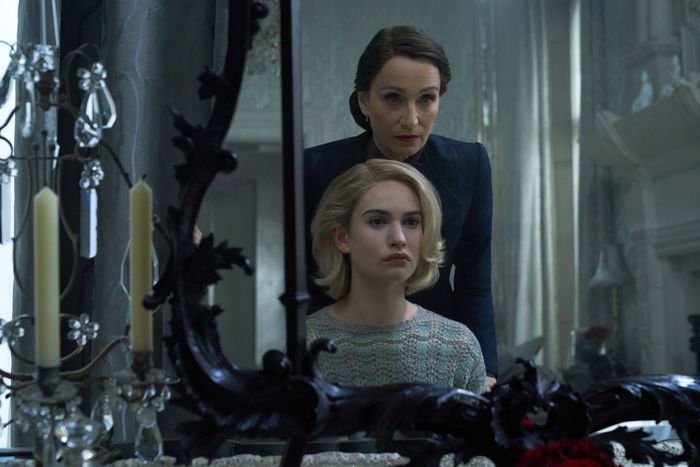 Comparisons of this new Rebecca to any of its predecessors will result in a less-than-favorable outcome. However, anyone who is experiencing Rebecca for the first time may be drawn in. Although the script takes some liberties and condenses material (necessary to accommodate a two-hour running time), it is mostly faithful to the novel. The three leads are solid. Armie Hammer captures the dual aspects of Maxim’s conflicted personality: the handsome, urbane gentleman, and the angry, haunted man-with-a-secret. Kristin Scott Thomas enjoys putting a unique stamp on the villainous Mrs. Danvers. Hers is a cold, calm performance that resists the temptation to go over-the-top (although it’s impossible to erase Dame Judith Anderson’s portrayal for Hitchcock – she inexplicably lost in the Best Supporting Actress race to The Grapes of Wrath’s Jane Darwell). And Lily James, one of the most dynamic British actresses of her generation, is captivating and easily gains our sympathy.

One oddity in Wheatley’s approach is the degree to which the sexual elements are downplayed. Rebecca is very much about sex and infidelity. Hitchcock, constrained by the Hays Code, was nevertheless able to provide enough clues in the subtext for the savvy viewer to recognize things that weren’t explicit, especially concerning the ambiguous nature of the Danvers/Rebecca relationship. For whatever reason, Wheatley has chosen to make a less salacious film during an era when a more explicit interpretation wouldn’t have caused consternation.

As remakes go, Rebecca is a serviceable take on a story that most viewers with a solid background in English literature will be familiar with. It adds little to what’s already out there but, like many remakes, it offers a slightly different perspective of the story and uses current actors to fill key roles. A decade from now, Wheatley’s Rebecca will have faded from the memory, entirely eclipsed by Hitchcock’s interpretation.