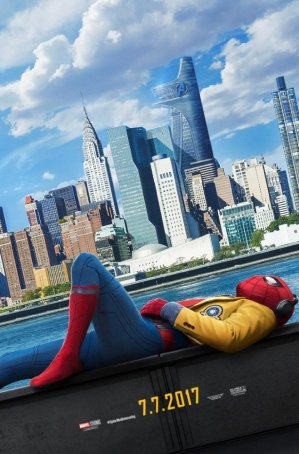 Spider-Man: Homecoming is two movies for the price of one. The first is about a socially awkward high school sophomore navigating the difficulties of being a teenager while trying to hold onto his “internship”. The second is about one of Marvel’s most beloved and iconic superheroes finally returning to the universe where most of the company’s other heroes reside. If Spider-Man: Homecoming had been released six months ago, I might have been more kindly disposed toward it. Since then, however, the super-hero genre has undergone a seismic shift resulting from two game-changing titles: Logan and Wonder Woman. Now, the generic material forming the whole cloth of Homecoming’s narrative just doesn’t cut it. It feels stale. While the Peter Parker stuff is enjoyable, that’s only part of what the movie is giving us. Every time Peter puts on the Spidey suit, we know exactly what we’re going to get, beat-by-beat. The movie lacks inspiration; even the big “twist” is more worthy of a suppressed chuckle than a dropped jaw – it’s like something pulled out of a bad soap opera.

This is the sixth Spider-Man movie. Marvel adherents will point out that it’s the first one to occur in the so-called “Marvel Cinematic Universe” (MCU for short), which is true. As a result of a deal between Sony and Disney, characters can be “shared.” That allowed this incarnation of Spider-Man (played by Tom Holland) to be awkwardly shoehorned into Captain America: Civil War and presents an opportunity for Tony Stark (Robert Downey Jr.), Happy Hogan (Jon Favreau), Pepper Potts (Gwyneth Paltrow), and Captain America (Chris Evans) to show up in Homecoming. While Cap’s appearances are perfect (rivaling Deadpool for best post-credits sequence in a Marvel-based movie), Iron Man functions more as a deus ex machina whose presence appears designed to keep reminding us that, yes, Spider-Man has come home. 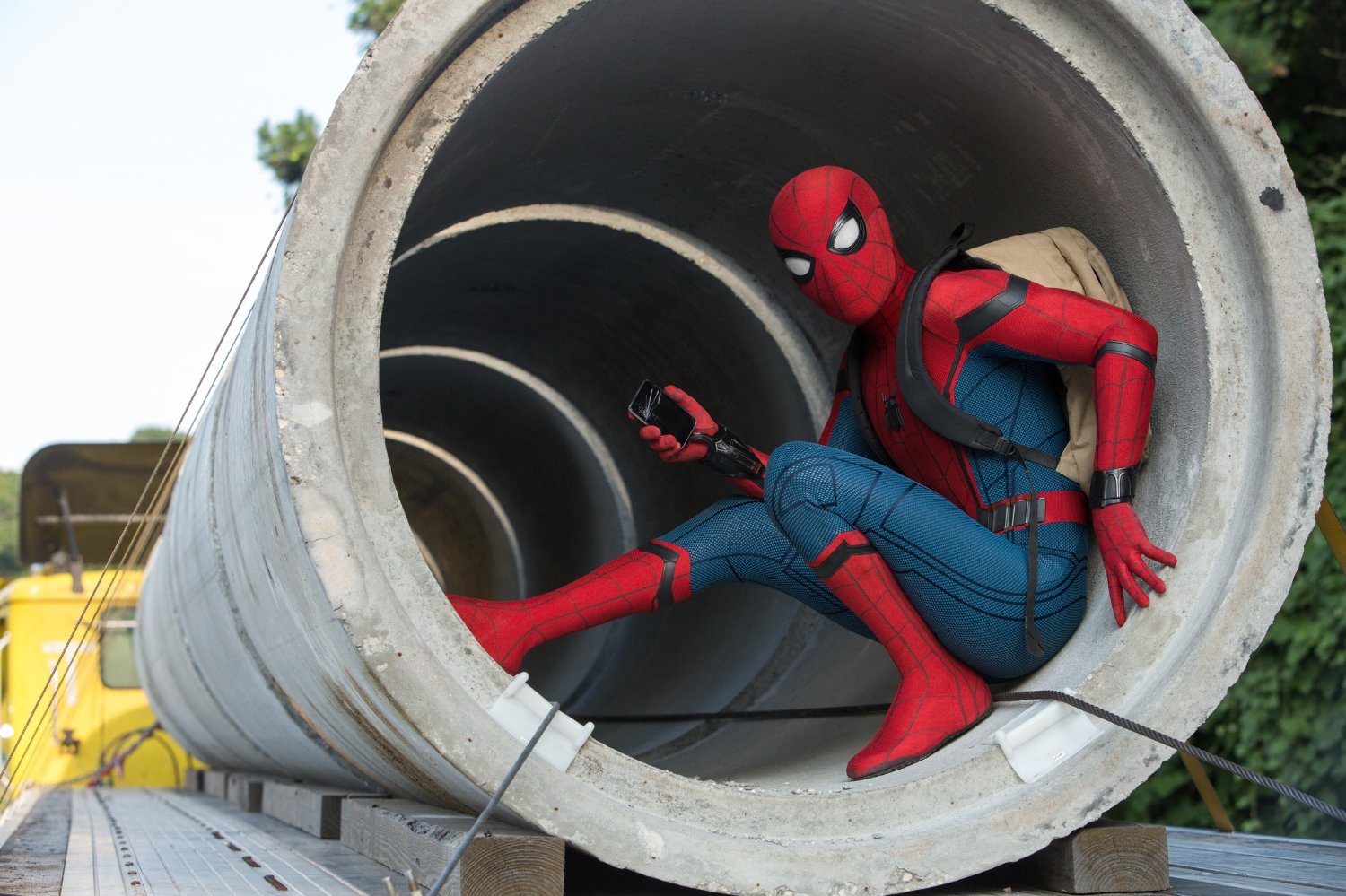 This is arguably the best Spider-Man movie since #2. That’s probably not saying much: Spider-Man 3 was a mess with studio executives undermining Raimi’s original intentions. The two Andrew Garfield reboots were ill-advised and poorly executed. So the bar wasn’t high and, fortunately, Homecoming cleared it, if only barely. But, compared to the first two Raimi films, this falls short. Raimi did a better job with the superhero material than Jon Watts (and the six credited screenwriters) does in Homecoming. Fans and critics have been mentioning the “John Hughes vibe” in the new movie. It’s there but I would argue that Raimi nailed it as well in the first two productions. Do people forget how Peter pined for Mary-Jane and how that culminated in the iconic upside-down kiss in the rain? Homecoming doesn’t have that moment.

Tonally, the movie is uncertain, although it veers closer to straight comedy than any of the previous Marvel Studio movies. Only Fox’s Deadpool is more openly humorous. Homecoming contains its share of serious-minded scenes but the goal of restoring Spider-Man’s comic book flippancy gives the film a lighter bent. At times, it’s as if Homecoming, like Guardians of the Galaxy and its sequel, is a push-back against the clouds of darkness that have gathered over recent superhero films.

The traditional superhero movie has an uncomplicated structure. After scenes introducing the hero and the villain(s), we get the initial engagement, some narrative material explaining the villain’s nefarious intentions, usually followed by a moment of existential crisis for the hero, then the inevitable rematch. Good superhero movies embellish and deviate just enough… They give us moments that stand the test of time. Homecoming follows the template in a disappointingly straightforward manner and, as a result, is enjoyable in the same way that any overproduced summer movie is: disposable entertainment meant to give the most ephemeral of highs before dissipating.

Thankfully, we’re spared another telling of the origin story. Spider-Man: Homecoming opens with a recap of the title character’s role in Civil War. We learn that he’s a “ground level” hero who wears a homespun costume to foil minor crimes. Spider-Man is a YouTube star but he hasn’t yet broken through with the mainstream media. He has a (hot) Aunt May (improbably played by Marisa Tomei) and an annoying best friend, Ned (Jacob Batalon). He’s a member of the academic decathalon team. His cluelessness is extreme when it comes to the opposite sex – he pines after longtime crush Liz (Laura Harrier) while ignoring Michelle (Zendaya), the girl under his nose. Tony Stark shows up occasionally, rushing in and out so fast we wonder whether Robert Downey Jr. has another movie to make. He gives Peter a suit filled with gadgets (and a voice provided by Jennifer Connelly) and hands him over to Happy, who has better things to do than babysit a kid. So Peter is left to his own devices.

Spider-Man’s enemy this time around is a nasty piece of work called The Vulture (Michael Keaton). A scrap scavenger who has been lucky enough to come into possession of alien technology, The Vulture is a black-market seller of super-powered weaponry. Along with his henchmen, The Tinkerer (Michael Chernus) and the two Shockers (Logan Marshall-Green and Bokeem Woodbine), The Vulture prepares heists of high-value targets to increase his inventory. That’s when Spider-Man starts interfering and, because Stark is temporarily distracted, Peter is forced to battle The Vulture on his own. 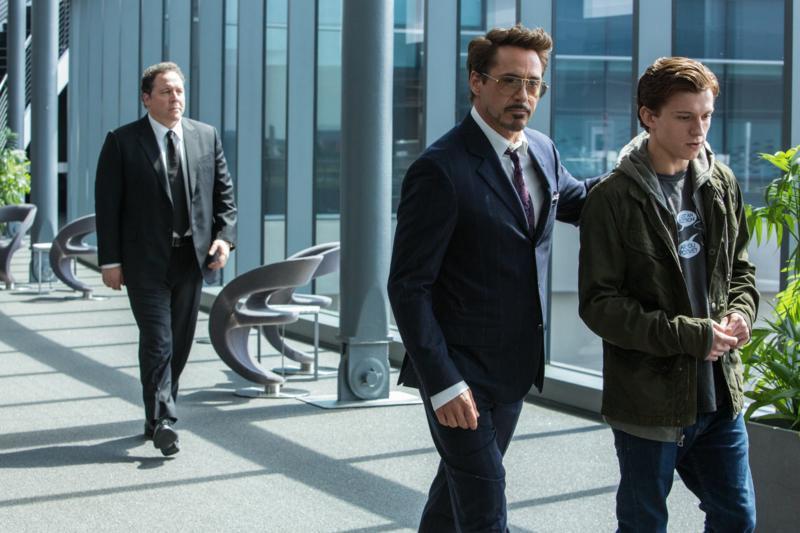 Tom Holland proves to be an excellent choice for Peter/Spider-Man. Reminiscent of the late Anton Yelchin, he embodies a teenager caught between the desire to reveal his identity and bask in the glory that would accompany such an action and the recognition that “with great power comes great responsibility.” He handles the one-liners (of which there are a lot) with panache. He’s more believable at the young age than Toby Maguire and more suitable in general than Andrew Garfield. Michael Keaton is an excellent foil, playing The Vulture as a man with a grudge who has turned to a life of crime because of a careless act on the part of Stark. With this role, Keaton advances his comic book legacy, adding a Marvel bad guy to his filmography.

Not all the casting choices are as good as Holland and Keaton. I found Jacob Batalon’s Ned to be as irritating as fingernails on a chalkboard, although that’s probably as much a factor of the screenplay as it is the performance. And, much as I like Marisa Tomei, I simply can’t buy her as (hot) Aunt May. To me, Rosemary Harris was perfect in the role and Sally Field was adequate. But Tomei?? I guess that’s what it means to reinvent the character for a new generation (something they’re also doing with one of Peter’s girlfriends).

The battle sequences are less than impressive. Watts doesn’t have a good feel for how to choreograph them so they often come across as chaotic (borderline incoherent). Since the results are easy to predict, however, that’s perhaps not much of a drawback. The CGI is uneven – some is fine but there are some dodgy bits (an early shot of Spider-Man swinging and a crowd shot from the top of the Washington Monument) that look like video game outtakes. Michael Giacchino’s score is lazy and derivative.  While I’ll give him credit for using an instrumental version of the animated “Spider-Man” song, his main theme bears more than a passing resemblance to the John Barry/Monty Norman “James Bond Theme”. (I guess it’s fair to ask whether that’s a bad thing…)

My guess is that Spider-Man fans will be so thrilled to have the Web Slinger back in the Marvel stable that they may not care that the narrative is threadbare with nary a moment’s innovation to be found. Maybe the problem is that there’s too much baggage or that the MCU has become too crowded. Whatever the case, although this Homecoming serves its purpose, it’s just a forgettable waystation on the MCU map, where all roads lead to Infinity War.