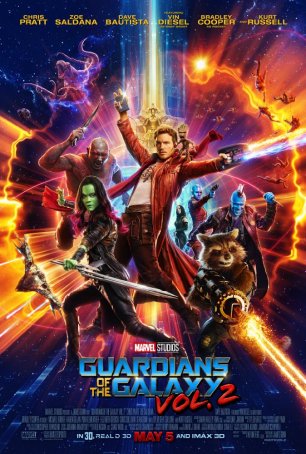 In August 2014, Marvel Studios released Guardians of the Galaxy. At the time, it was considered to be a gamble: a sci-fi/superhero mashup featuring characters no one other than comic book die-hards would recognize. To raise awareness and generate anticipation, Marvel employed a one-year promotional strategy that worked brilliantly. Guardians of the Galaxy opened to a nearly $100 million (domestic) first weekend and accrued more than $750 million worldwide during its theatrical run. While it’s fair to credit Marvel’s marketing machine for some of that success, the underlying reason was James Gunn, the creative force behind the production. His vision made Guardians of the Galaxy sufficiently fresh and enjoyable that it achieved escape velocity to become a late season “must-see” attraction.

Three years later, the inevitable sequel has arrived. Guardians of the Galaxy is no longer an obscure property; it has become one of Marvel’s crown jewels and the inclusion of the characters in the upcoming The Avengers: Infinity War will be yet another reason to expect that movie to smash all existing box office records. With Volume 2, Gunn faces a unique challenge. His first movie was so fundamentally different from anything released by Marvel (excepting Deadpool, which came later and was one of those Marvel/Fox hybrids) that it put a lot of pressure on Gunn to replicate everything – tone, style, pace, visual razzle-dazzle – without feeling like a retread. Instead of retreating, however, he has doubled down. As a result, Volume 2 can claim to be bigger and better than its predecessor, although it still suffers from some of the narrative sleight-of-hand issues that kept Guardians of Galaxy from achieving greatness. 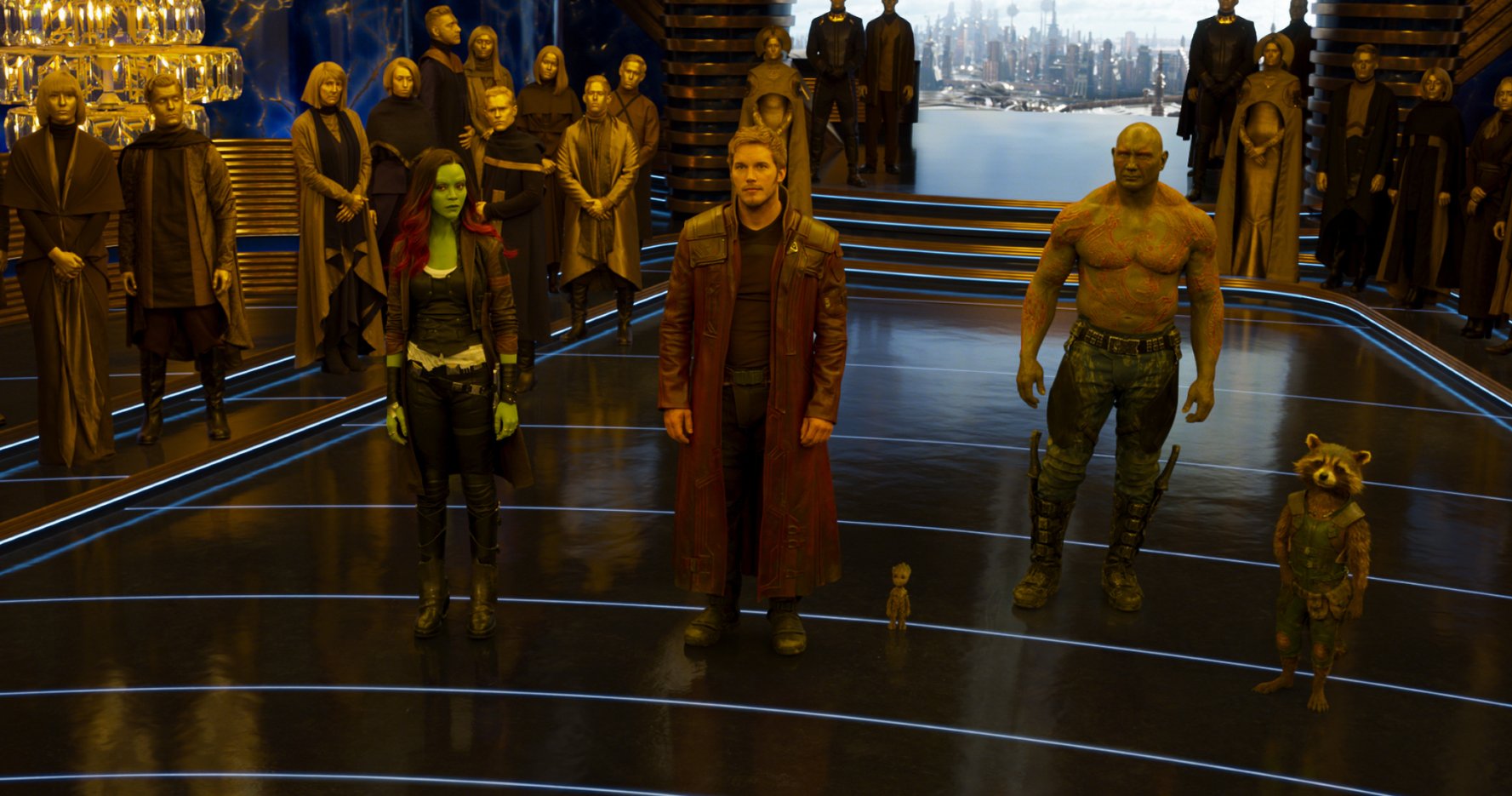 The movie re-introduces the Guardians with a big action set-piece: a typically spectacular battle sequence presented from an atypically elliptical perspective. While Star Lord (Chris Pratt), Gamora (Zoe Saldana), Drax (Dave Bautista), and Rocket Raccoon (voice of Bradley Cooper) take on a space-faring behemoth in the background, Baby Groot (voice of Vin Diesel) does an impromptu dance routine in the foreground. As a viewer, we understand that the fight is the important thing but our attention is captured by Groot’s antics and it’s not until Gunn shifts the spotlight that we are able to focus on the larger picture. Moments like this allow Volume 2 to avoid the staleness that can germinate from a cascade of special effects-laden scenes.

The Guardians consider themselves to be more than co-workers or friends – they’re a family and the ties that bind, while not easily severed, can become strained. Volume 2 is about other families as well. Star Lord encounters his genetic father, a Celestial called Ego (Kurt Russell), who’s actually a planet in human form. To say they have issues is to understate the situation. There’s also the evolving conflict between Gamora and her sister, Nebula (Karen Gillan). And there’s the remorse of Yondu (Michael Rooker) regarding his treatment of his adopted son, Star Lord. Some of this dramatic material works and some doesn’t, but it at least shows that the movie is trying to have a heart to go along with its pyrotechnics. 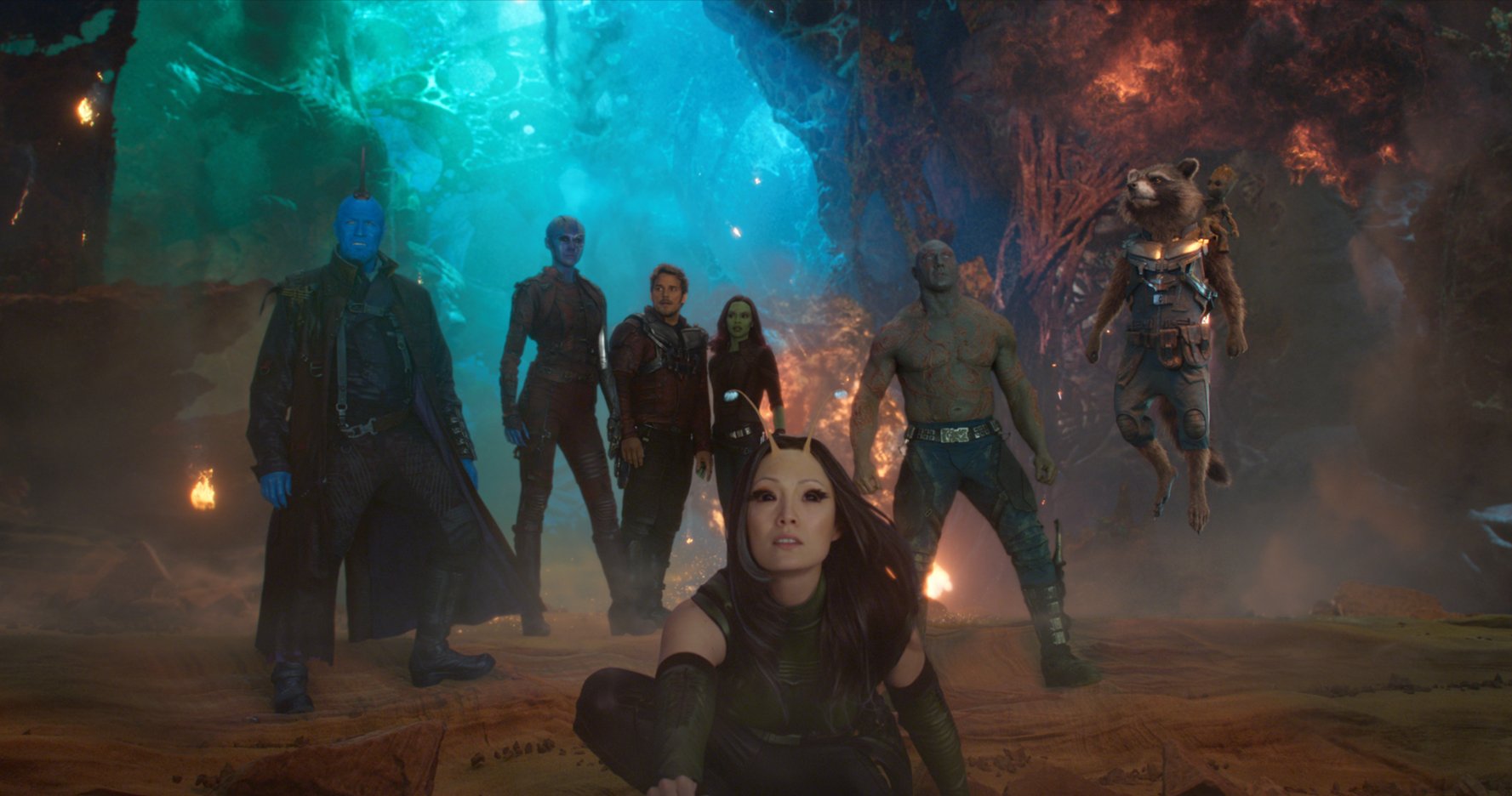 Tonally, Gunn maintains an irreverent approach, peppering the dialogue with double entendres that may make parents of younger viewers uncomfortable. Things aren’t as free-wheeling and satirical as in Deadpool, but this is the closest any pure Marvel movie has gotten to both (a) being labeled a comedy and (b) getting an R rating. It’s close but doesn’t quite cross either line. Still, Volume 2 is funny and raunchy in all the right ways. Stan Lee’s dual cameo, which features the first-ever big screen appearance of The Watchers, is an example of the former. (Certainly not the latter.) [Note: there are five scenes during and after the end credits. None are critical to the plot so they can be skipped but for those who enjoy this stuff, Volume 2 doesn’t skimp.]

While the main story is about Star Lord reconnecting with his father (and learning that Dad perhaps isn’t as friendly and paternal as he initially appears to be), there are a lot of subplots floating around, including one that features Sylvester Stallone. These appear to be “hooks” for a future film rather than integral parts of this one. Volume 2 is more about solidifying the relationships introduced in Volume 1 and adding new members to the team. The first two films in this series, once combined, fill out the origin tale that was incomplete after the introductory chapter.

I’m not ready to advocate seeing Volume 2 in 3-D but the movie is visually arresting. The CGI is extreme – sometimes showy, sometimes subtle. There probably isn’t a single shot that wasn’t altered in some way – even the simple Earth-bound sequence that opens the action uses technology to convincingly de-age Kurt Russell. The soundtrack once again relies more heavily on ‘70s pop/rock songs than orchestral themes, with Looking Glass’ “Brandy” and Fleetwood Mac’s “The Chain” being anthems. 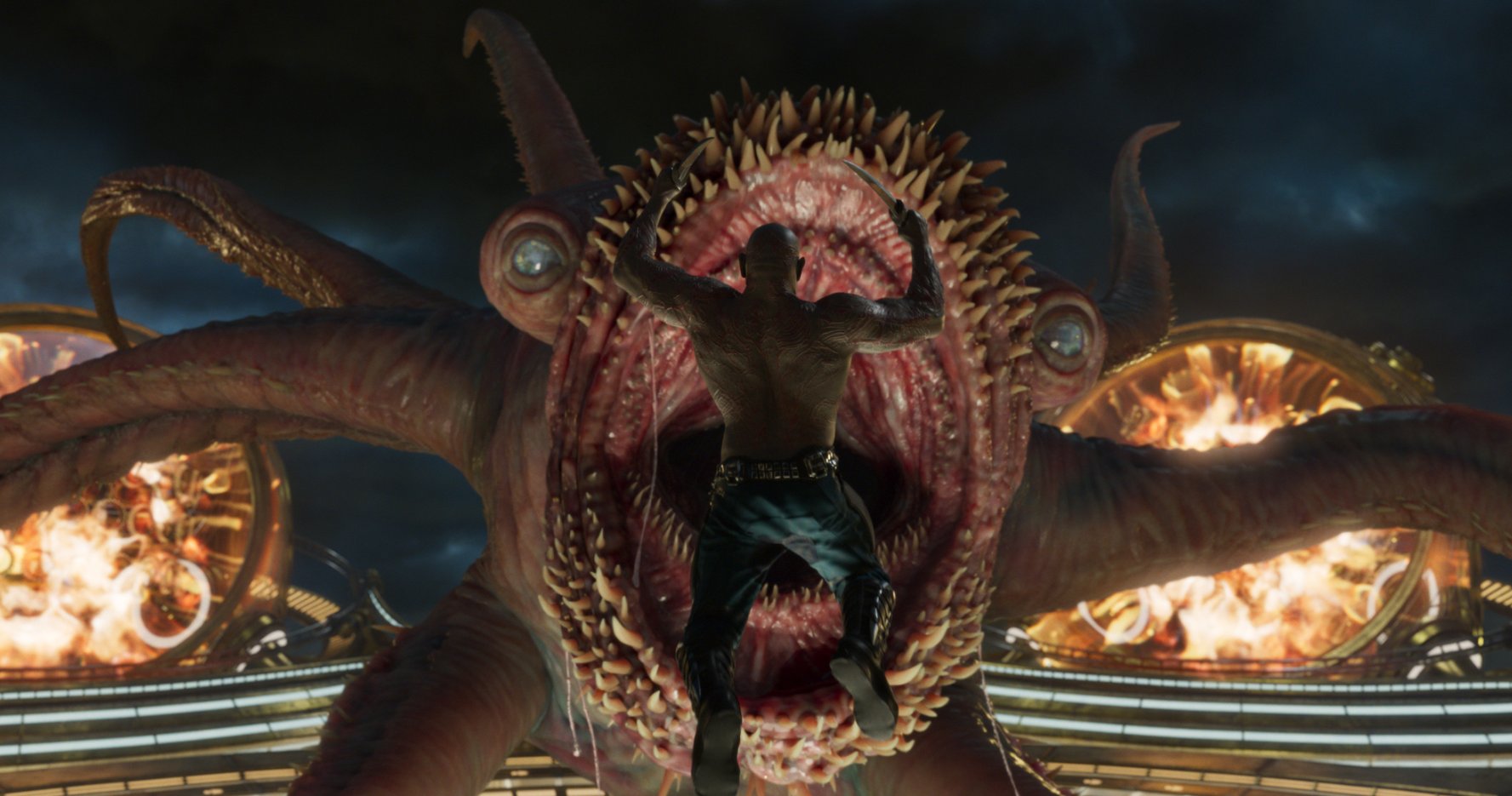 The actors are in fine form. Chris Pratt and Zoe Saldana re-inhabit their characters as if little time had passed since we last saw them. Their slow-burning chemistry (described by Star Lord as being reminiscent of Sam and Diane from “Cheers”) is evident and handled with just enough restraint to work. Dave Bautista is given an opportunity to humanize Drax and make him into more than just a puncher and a punch-line. Kurt Russell, enjoying appearances in two of 2017’s biggest movies (the other being The Fate of the Furious), uses his inherent likability to develop a character who’s not what we expect.

As was the case with Guardians of the Galaxy, the ending doesn’t hold up well to scrutiny but it’s comic book-like in its nature and execution. Marvel has a history of dispatching their god-like villains in silly and unconvincing manners and what happens in Guardians of the Galaxy Volume 2 is not an exception. However, viewers aren’t going to this movie with the expectation that it will provide a literate, airtight plot. The bar for popcorn escapism is set low.

Guardians of the Galaxy Volume 2 delivers a similar experience to the one provided by its predecessor except with more of nearly everything. The blessing of a sequel is that it reunites viewers with familiar characters doing familiar things. The curse is that it burdens the filmmakers with having to outdo themselves. Gunn doesn’t appear to have been intimidated by the challenge. Marvel’s mainline superheroes may have fallen into a rut building up to Infinity War but that ailment hasn’t afflicted this group of mismatched misfits.