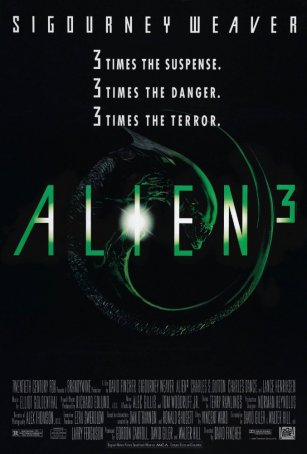 Way to go Fox. Way to kill off a franchise where the first two installments were among the best around. Sadly, as bad as Alien 3 is – and it’s really bad – it’s only the beginning of a process. Few films that began with episodes as great as Ridley Scott’s Alien and James Cameron’s Aliens have sunk as low as Alien vs. Predator and its misbegotten sequel. But the slide began with Alien 3. Perhaps “slide” is too gentle a word. “Complete collapse” might be more accurate.

It all started with a lie. Or perhaps bait & switch would be more apt. “In 1979, we discovered in space no one can hear you scream. In 1992, we will discover, on Earth, EVERYONE can hear you scream.” If you’re younger than 35, you probably don’t remember that teaser. If you’re older and especially if you’re an Alien fan, you most definitely do. Coming off Alien and Aliens, there seemed to be only two directions the franchise could go to maintain its momentum: take the story to the Aliens’ home planet or bring the action to Earth. The 1991 teaser seemed to confirm the latter yet, when the film arrived, Earth was nowhere to be found. Instead of advancing the story, Alien 3 regressed and, by failing to fulfill the promise of the teaser, it betrayed the legions of fans awaiting the next chapter. 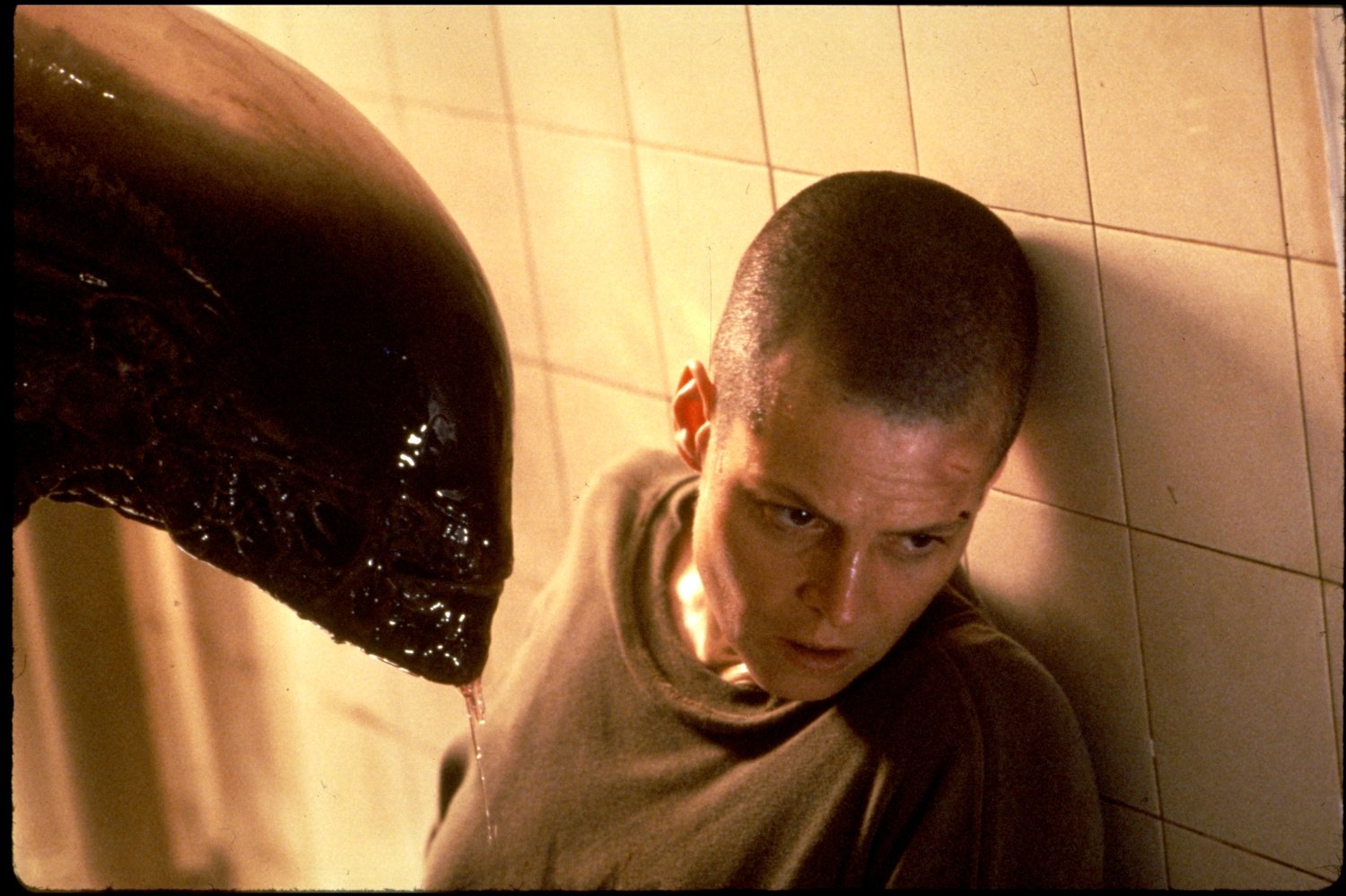 If only that was the lone problem with Alien 3… It’s not. The change in story direction was a hint of the behind-the-scenes chaos and upheaval that occurred during the years following Cameron’s decision not to be involved in a second sequel. Scripts were commissioned and discarded. Directors were approached. In the end, David Fincher was hired less because of his pedigree (he was a respected music video director but had no feature film experience) than because the producers were desperate. Over the years, Fincher has tried to distance himself as much as possible from the movie, which was marred by infighting and interference. It’s rumored that at one point he investigated the viability of using the Alan Smithee pseudonym. Years after the film underperformed theatrically, Fox released a “special edition” (also referred to as the “Assembly Cut”) that was supposed to hew closer to Fincher’s original intentions. The director declined to be involved, however, saying that his vision had been hopelessly compromised and the footage didn’t exist to restore it. It’s possible to argue that the Assembly Cut is better than the Theatrical Cut, but that’s debatable. It’s less confusing, to be sure, and some of the secondary character arcs are slightly better fleshed out. However, it’s also longer and more of this film can’t be considered to be a good thing. It’s a little like slathering icing on a cake that’s already rancid, moldy, and rotting.

Alien 3 opens with a flaw so fundamental that nothing it could ever do would be able to repair the damage. Killing off Newt and Hicks during the opening credits not only cripples the character of Ripley going forward but it undercuts the entire emotional arc of Aliens. James Cameron, on watching Alien 3, declared that this decision was a “slap in the face” to fans of the previous film. Alan Dean Foster, the writer of the adaptation (who tried to find a way to save Newt until he was told by the producers that he wasn’t allowed to take that much license), declared it to be “an obscenity.” For the viewer, being forced to endure these sudden, meaningless deaths of beloved characters at the outset becomes a major distraction. We have to grieve and that period of grief forces us to detach from the story. (This is why Spock died at the end of Star Trek II rather than near the beginning, as had originally been proposed.) By the time we’re once again engaged in what’s happening in Alien 3, we’re greeted with the news that Ripley has a queen inside her and is going to die. 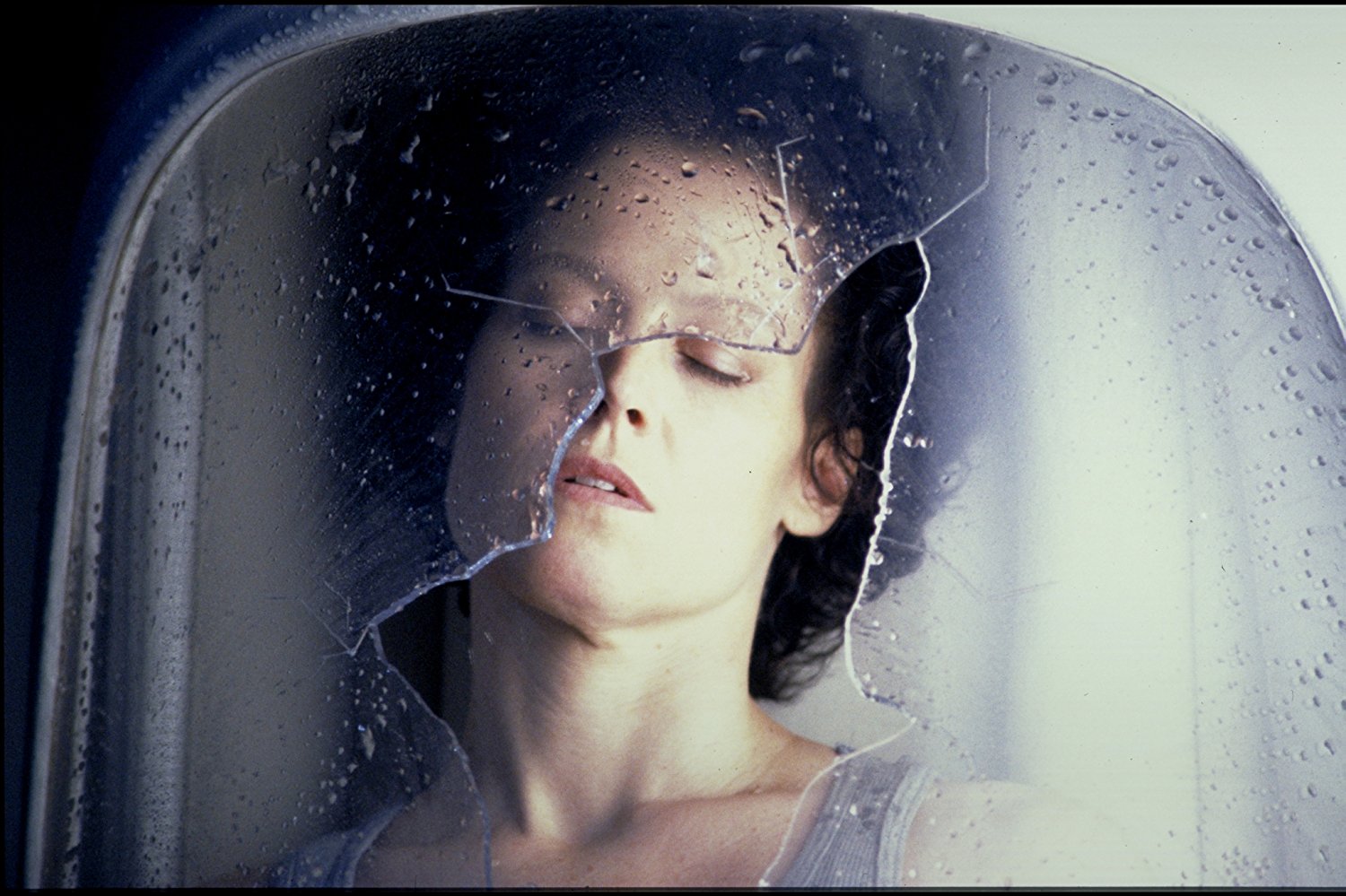 The movie begins with Ripley (once again played by Sigourney Weaver) crash-landing on a remote prison planet. Her three companions – Hicks, Newt, and Bishop – arrive there in worse condition. Hicks died in a fire. Newt drowned in her capsule. And the already-damaged Bishop was torn to pieces. As we later learn, Ripley isn’t as unharmed as she appears – in transit, a face-hugger latched onto her and impregnated her with a queen embryo.

The planet is a mining colony manned by convicts. There are two officers in charge – the loud-mouthed, belligerent Andrews (Brian Glover) and the meek Aaron (Ralph Brown). The doctor who cares for Ripley, Clemens (Charles Dance), seems the most “normal” of the bunch but he hides a supposedly dark backstory (which, when revealed, isn’t all that shocking). The only other member of the large ensemble cast to make an impression is Charles S. Dutton as a preacher who walks softly and carries a big stick. And sticks are about the only available weapons since, this being a prison planet, there are no guns. That makes for a bad situation when another face-hugger uses a local animal as its breeder and – pop – there’s an alien problem.

Alien 3 fails to move the franchise forward. The line of progression from Alien to Aliens generated expectations of something epic in Alien 3 – expectations that weren’t met. Instead, the filmmakers opted to backpedal. Discounting the queen embryo inside Ripley, there’s only one creature in the film – an odd animal/alien hybrid with a slightly different body type than what we saw in the other two films. The basic story, with the alien hunting down and killing off convicts, is a second-rate copy of what Ridley Scott did in Alien. Fincher delivers atmosphere aplenty but little in the way of tension. The characters are mostly undeveloped, thereby rendering their deaths slasher film-irrelevant. One of the few that attains a semblance of multi-dimensionality, Clemens, is strangely among the first to die. That’s only one of many miscalculations in a film defined by them. 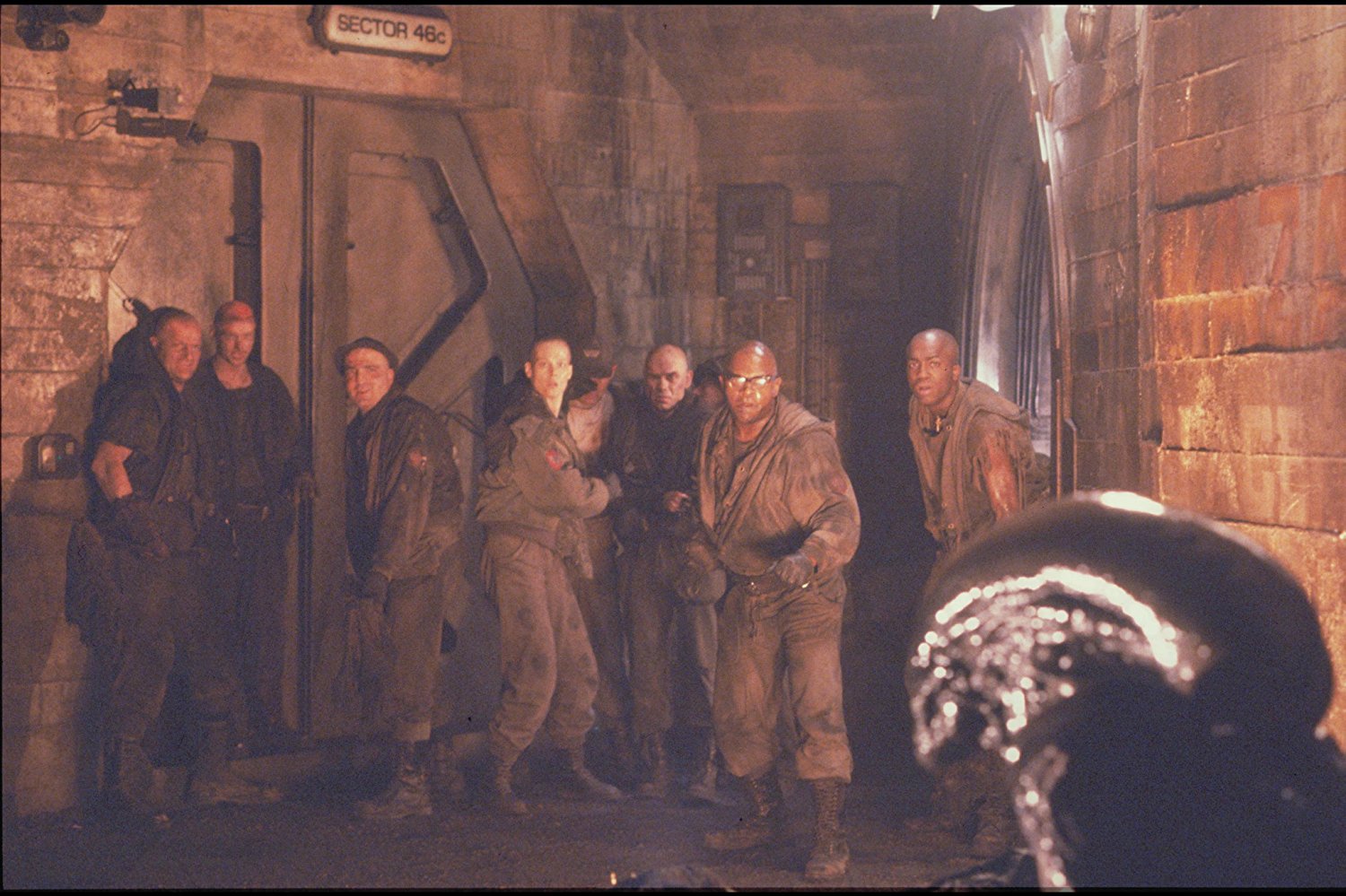 One area in which Alien 3 excels is the acting. The cast, comprised primarily of mainstays of British cinema and TV, is uniformly excellent. Charles Dance, Brian Glover, Paul McGann – all are as good as the deplorable script allows. Charles S. Dutton, one of the few Americans, does what he can to fill the gap left by the execution of Hicks. His character, a unique blend of toughness and spirituality, deserves a deeper exploration than he’s given. Aside from Weaver, the only returning cast member from Aliens is Lance Henriksen, although he’s playing a different character (supposedly the human inspiration for Bishop). His introduction toward the end adds an element of suspense to the climax.

Although Weaver’s Ripley is recognizably Ripley (unlike in Alien: Resurrection), the character has been marginalized. Gone is the heroic leader who emerged late in Alien and took command in Aliens. Now, she’s first paralyzed by grief over Newt (Hicks’ death doesn’t seem to faze her) then shattered by the revelation of what’s inside of her. As much as it hurts to lose Newt, it’s doubly depressing never to catch more than a fleeting glimpse of the action hero who made Aliens such a fulfilling experience. 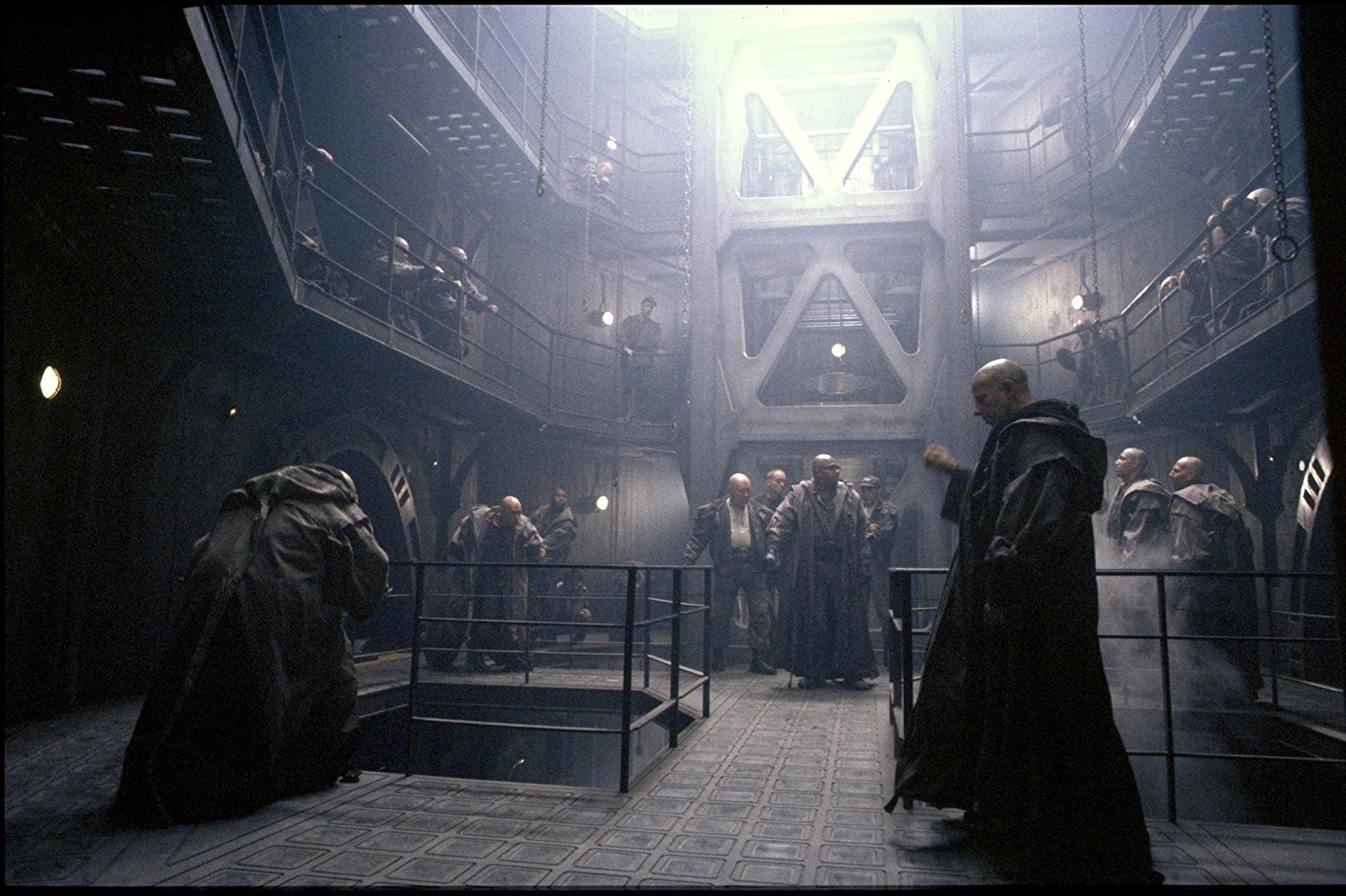 From a technical perspective, there’s nothing wrong with the creature design. Although this is a variant of the xenomorph, it’s still recognizably the product of H.R. Giger’s imagination. The setting is suitably dark and gloomy but it’s style over substance. Elliot Goldenthal’s score is beyond disappointing – a generic sounding composition that pales in comparison with the compelling, powerful work done by Jerry Goldsmith (Alien) and James Horner (Aliens).

Time has in some ways been kind to Alien 3. Watching it today, the bitterness is no longer as strong as it was in 1992. The sense that the filmmakers have betrayed the franchise has faded, allowing the film to be judged on its own merits which, as it turns out, are few and far between. This is a bad movie by any standards – an argument that the Alien franchise should have stopped after two installments. Ignoring the Predator cross-overs, this is the worst the series had to offer but nothing to come after has been able to redeem it. Calling the fourth film Resurrection was appropriate in one sense because Alien 3 killed the series and left it dead and stinking in the cold vacuum of space.

You can read the my original review of Alien 3, written back at the time of its 1992 theatrical release, here.